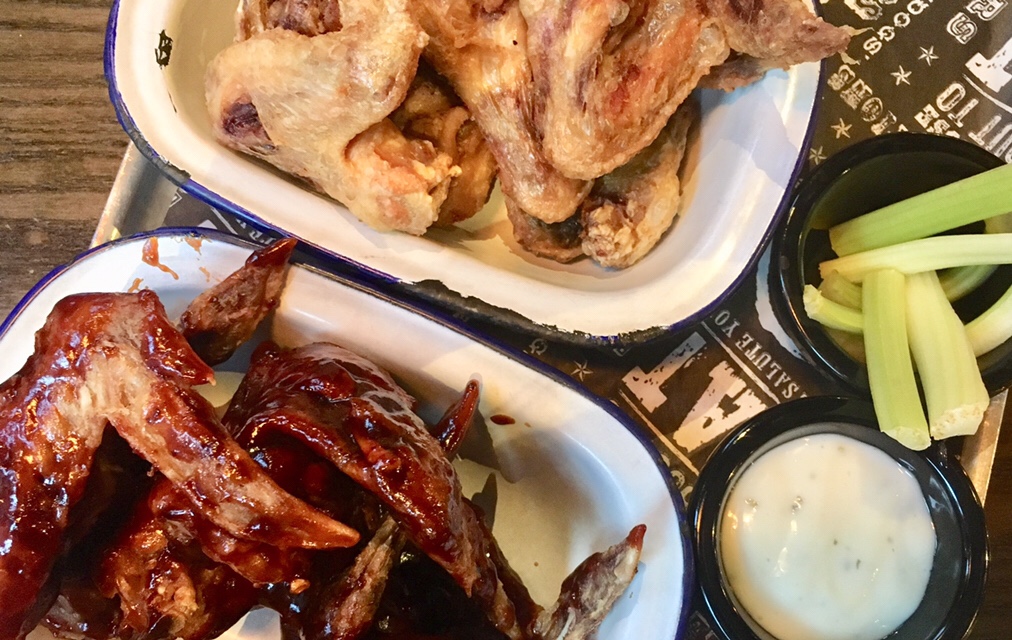 I go through fits and starts when it comes to chicken wings. Sometimes they’re all I can think about and other times I genuinely couldn’t give two hoots about them.

Back in early August when Ian and I moved into our #CityCentreWankerPad we ate out a lot. And by ‘a lot’ I mean we were living like rock stars. But unfortunately the realisation that a nice flat comes with more of a lemonade budget, we started to downsize our eating out options. I’m sure we could’ve just gone food shopping, but where’s the fun in that? One of the places we tried during this (fleeting) budget friendly week was The Smoke Haus in Brindleyplace.

We’d previously eaten here once before, deciding that the food was ok without really being anything massively special. In the years since that, many brilliant foodie spots have opened up – not to mention Digbeth Dining Club, which is always doing much better ‘smokehouse’ options than this small chain anyway. Truth is, we never really bothered to return because it was all a bit forgettable, in hindsight, and because Dick’s Smokehouse (frequently at DDC; order the ribs and thank me later) just does it all so much better. So what dragged us back? All you can eat chicken wings for…. ten whole pounds. Yup.

While there is something that my inner fat pig loves about the all-you-can-eat situation, in my experience that generally means you get pretty unmemorable food. It’s usually executed fairly badly with neither the kitchen nor the floor staff seeming to give much of a shit about quality or customer enjoyment. And why would you? My £10 probably didn’t even cover the wages of the bored looking waitress that refreshed our dishes that night. 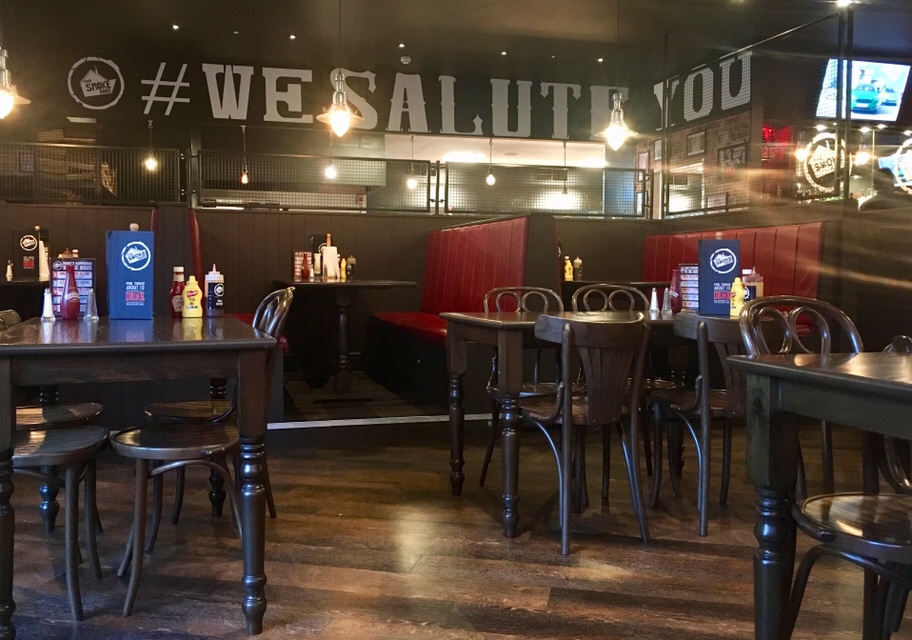 So what’s the all you can eat wings Wednesday at Smoke Haus got to offer? In truth, nothing very special. There’s three variations of wings available (plain, hot, BBQ) and you can mix and match as you see fit. They chuck so many into a dish to begin with that I got the feeling they honestly couldn’t care less. Although judging by the speed the scrawny guy next to us ploughed through his they’re perhaps used to malnourished carnivores rather than two semi drunk people that just wanted dinner. Oh and speaking of the guy ‘next to us’, he was one of only two other tables in the (enormous) restaurant. Ten quid all you can eat and they still can’t get bums on seats.. maybe it’s the fake graffiti wallpaper, or perhaps it’s the fact that the staff are largely more interested in flirting with each other rather than serving anyone.

Or maybe it’s because the wings can best be described as meh. 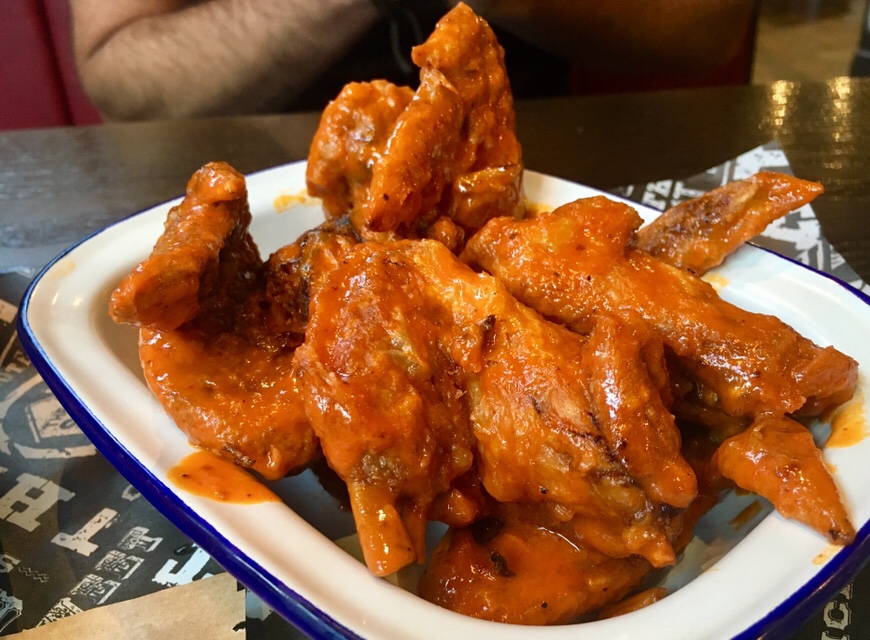 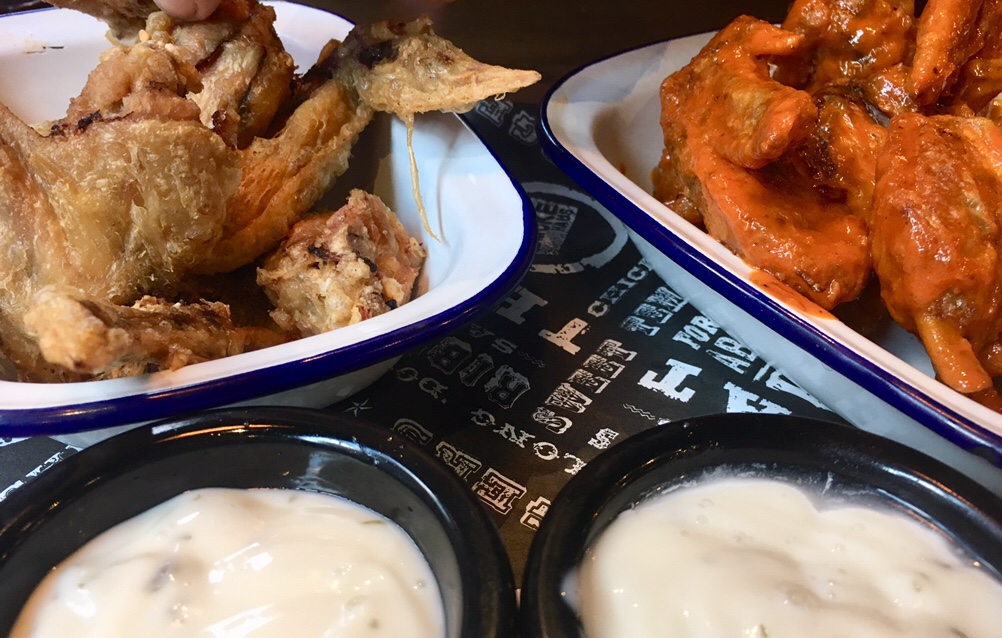 We started with the wings smothered in an illumious hot sauce, which I recognised from my last visit. The wings weren’t very pliable and just about warm. I suspect they’d been sat there a while, waiting desperately for someone (anyone) to just eat them and let it be over. A portion of fries as luke warm as the first set of wings quickly got sent back to be replaced, and I realised I was doing the sneering face that Ian calls ‘snobby’. I know, I know, wanting your food to be cooked fresh – what a cow I am. 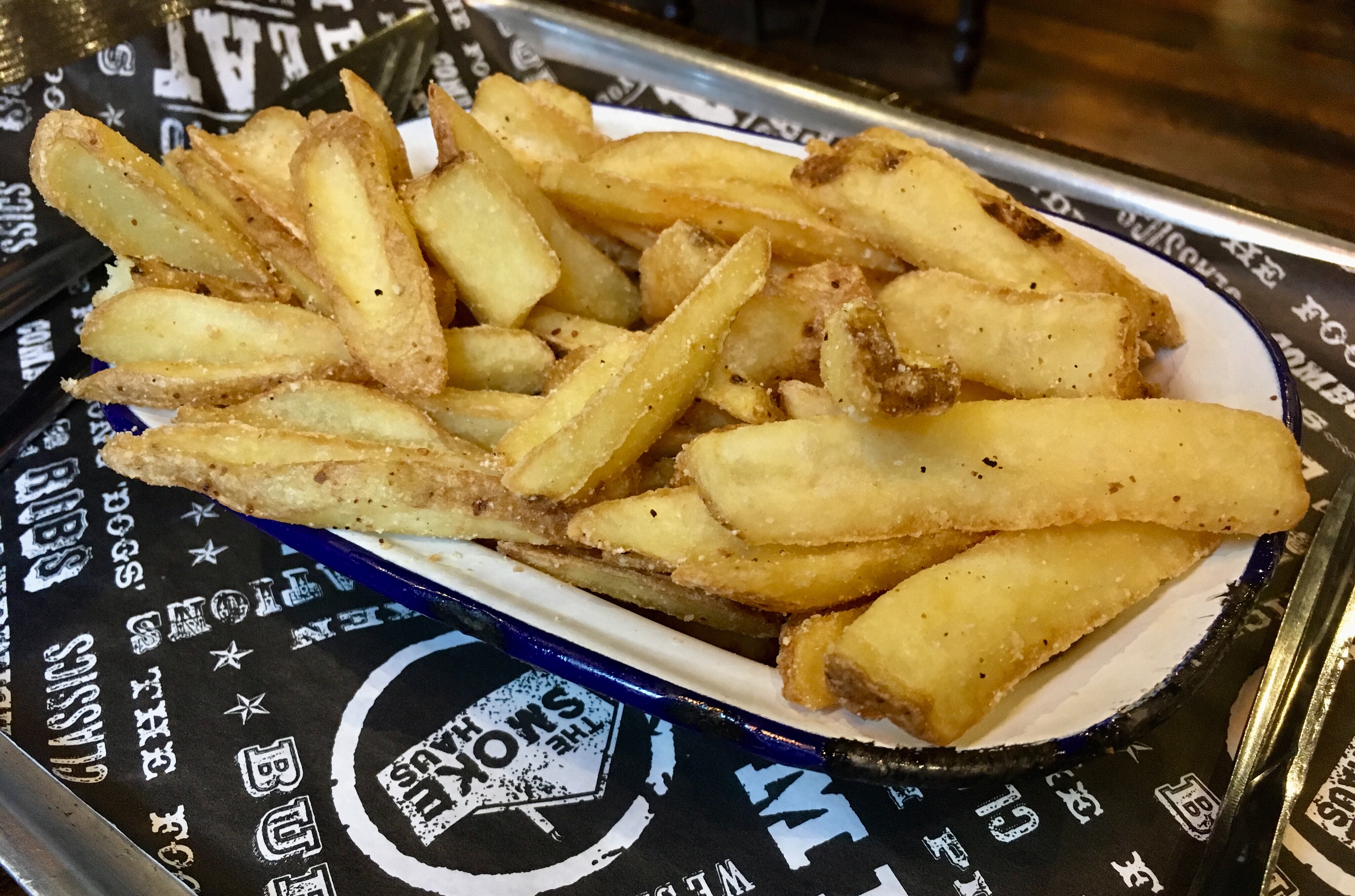 Chips that had finally seen hot oil and a set of plain wings came next, and thankfully were much better. Crispy skin and juicy meat; I wondered if the chickens were by now jumping into the fryer just for some excitement. Either way, Ian enjoyed these much more than the former, and I enjoyed becoming at one with about 2 pints of blue cheese dip. The BBQ version that turned up looked like dinosaurs and were on the sloppy side, and I started to feel like I had napkin rash on my face from how much I had to groom myself during the eating of them. I also have no doubt that this was the same bought in sauce this joint likes to put on 70% of the food here. 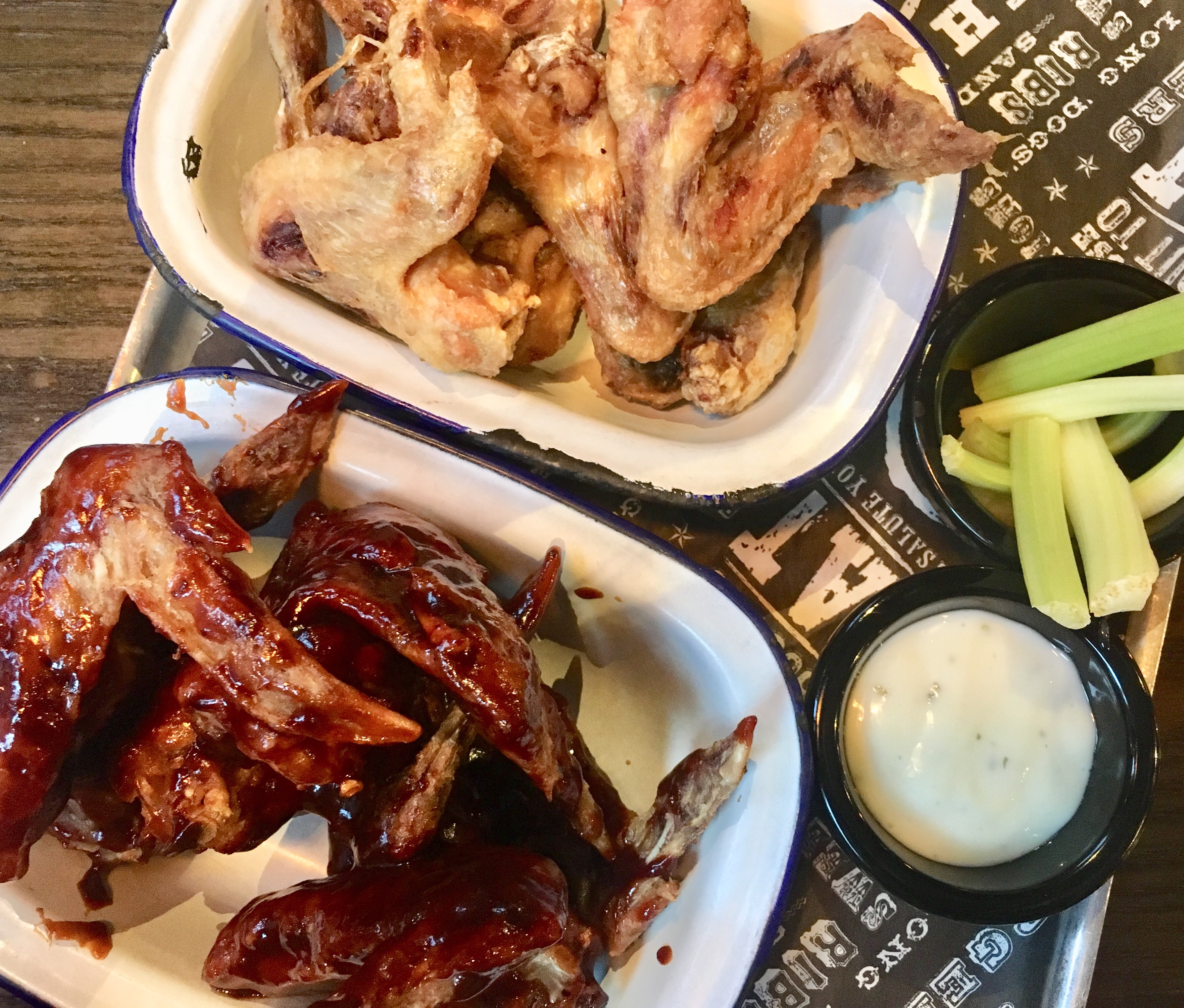 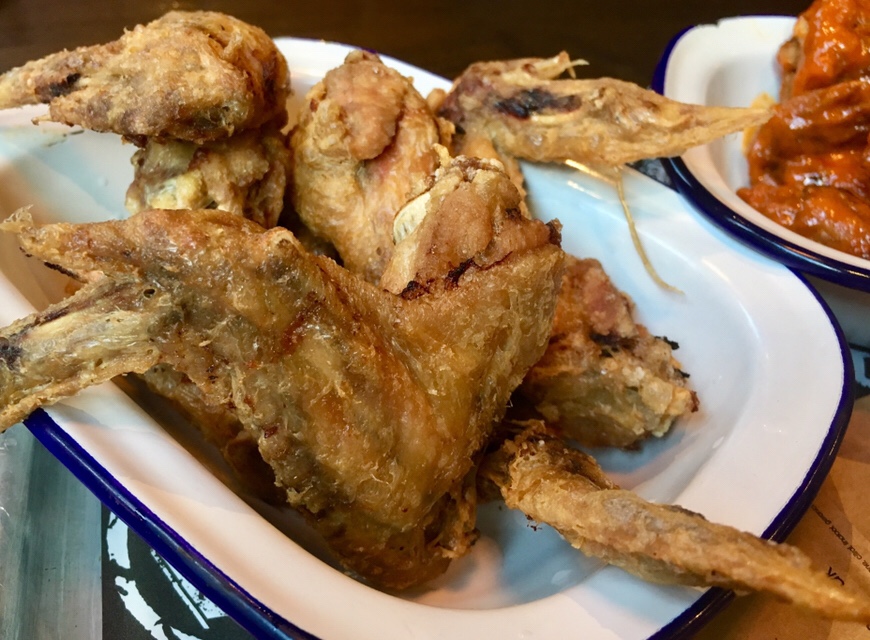 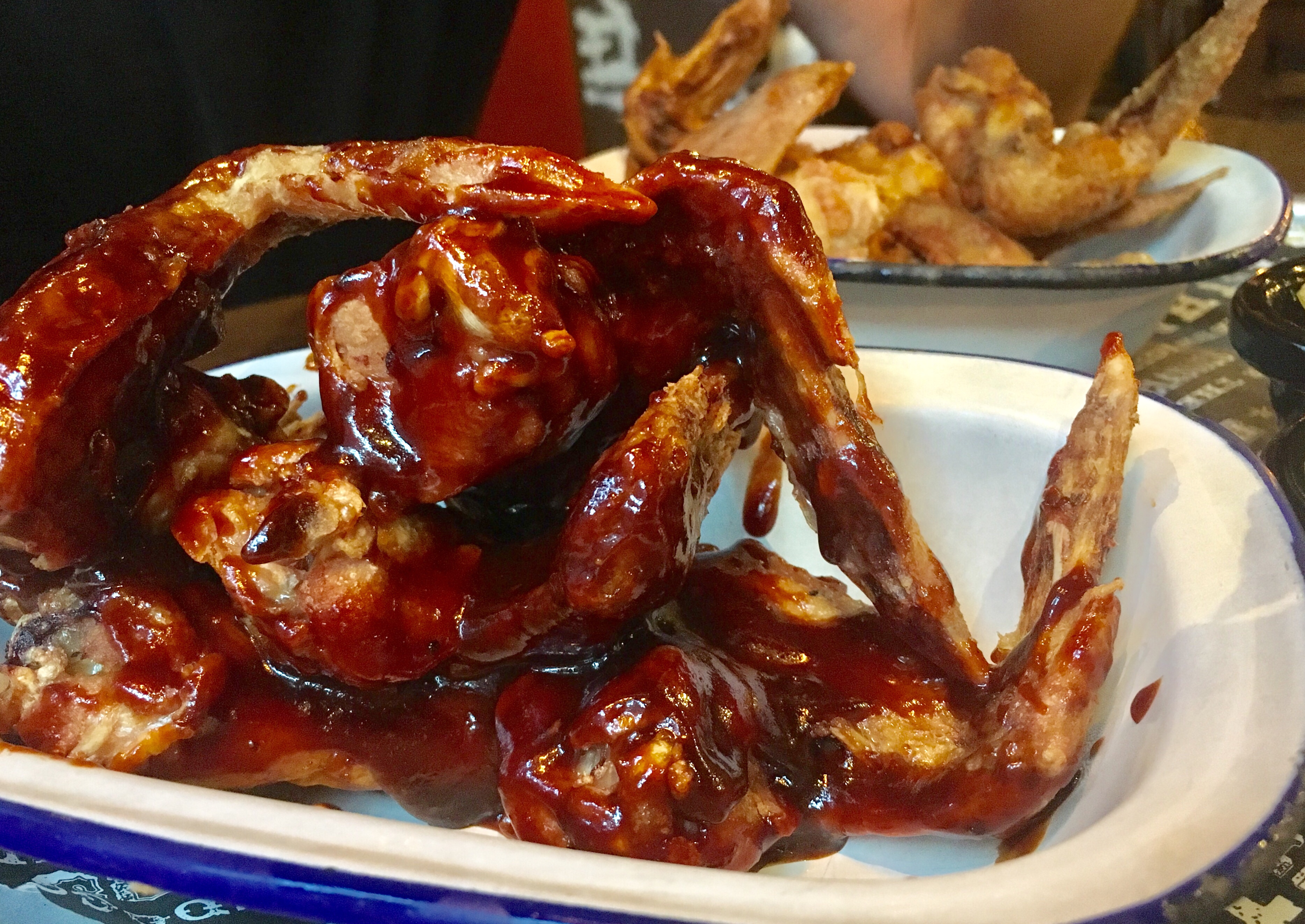 After three dishes I got bored, and started daydreaming about the ridiculously moreish wings that Original Patty Men roll out on the same day. Granted they cost a lot more but they have some pizazz. When we left The Smoke Haus that balmy night back in August I was fairly indifferent (even with a hint of beer fog) about what I’d just eaten, but with hindsight it just wasn’t very exciting – even if it did cost a single crisp brown note. I’ve clearly struggled so hard to remember the experience it’s taken me 7 weeks to put any words together about it. And truth be told, I only did that because I want to delete the photos so my phone stops screaming at me about storage.

It wasn’t awful, I just didn’t care. I’m not entirely sure which is worse…

Disclosure: We paid for all food and drinks in full at The Smoke Haus. All opinions, photos and blue cheese covered fingers are my own