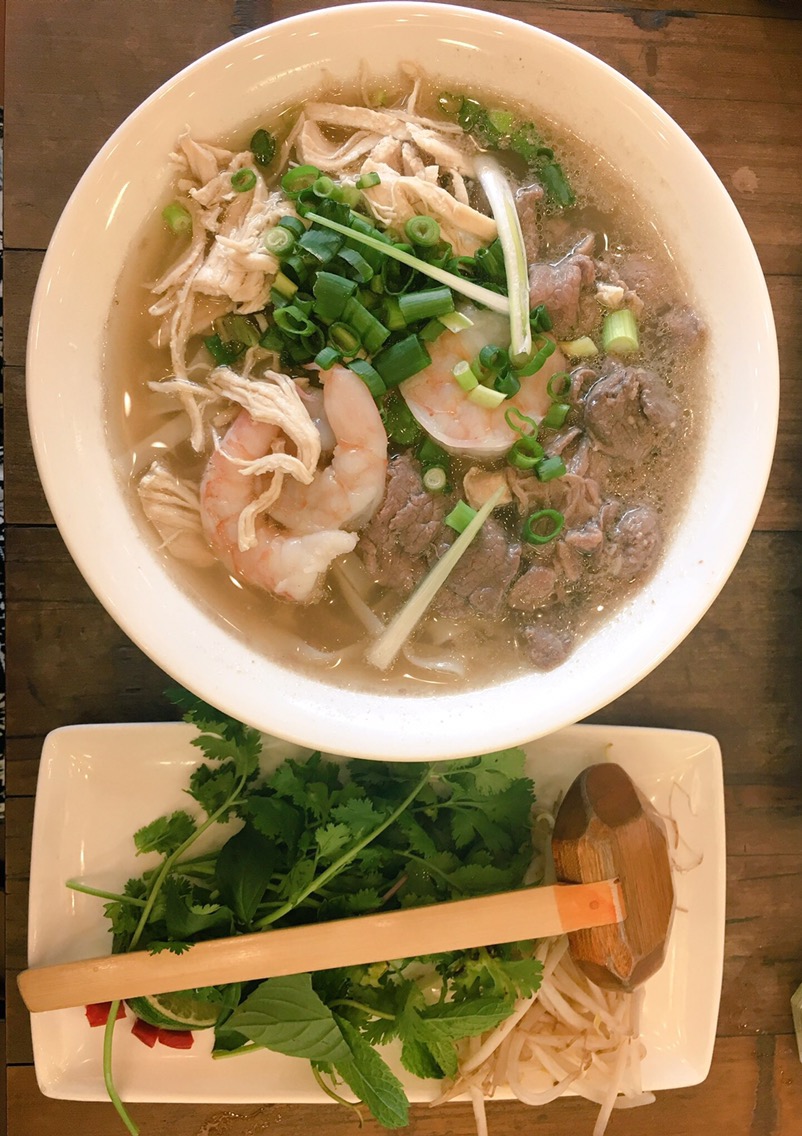 I’ve written before about my love affair with Pho Birmingham – check it out – located in the food court area of Grand Central.

Once you get over the fact that there’s always a queue (and in winter it’s ruddy freezing) it’s a great spot for a steaming bowl of noodle soup or one of the other Vietnamese inspired dishes available. I eat there frequently and have tried a range of items from the menu, including the wok fried noodles, chicken salad – a favourite of mine – and, of course, the morning glory side dish; the most overpriced yet glorious garlicy spinach concoction you’ll find in Birmingham.

Arriving at 12:45 the restaurant was already thriving, but we were quickly were given a table for two and the paper menus to puruse. While deciding what to eat I picked out the Green Detox Juice (£3.50) to both quench my thirst and also, hopefully, reduce my fuzzy hangover from a night of blogger cocktails. A combination of pear, spinach, lemon and cucumber, the colourful juice included all of the nutritious pulp (much to the horror of Ian who finds the idea of juicing repulsive) and was obviously freshly pressed not bottled. I felt more virtuous just looking at it, and the flavours were clean and refreshing. Ian chose a tangy Bloody Mary (£7.50) which was deliciously spicy.

Our starters included the prawn summer rolls, Gỏi cuốn (£4.95) and the squid, Mực chiên giòn (£6.95). The tender baby squid pieces – including legs which Ian enjoyed most – were lightly fried and came with a separate salt, pepper and lime diprice for added flavour; our preferred starter by far. The prawn summer rolls were quite bland and having had the chicken version before I’d revert to that next time. I’d also recommend choosing the thicker peanut alternative to the watery nước chấm dipping sauce.

For the main I opted for a bowl of Pho (a ramen-like soup) whereas Ian chose wok fried noodles. The Phở đặc biệt (£11.25) included juicy tiger prawns, shredded chicken and flash fried thinly sliced steak in a garlic infused beef stock; I added some of the sriracha sauce available on the table to spice up the broth. The rice noodles gave the dish some bulk, and the delicate flavour of the herbs from the additional plate of coriander and chillies allow for a more personalised dish. Noodle-lover Ian picked the Beef Phở Xào (£9.25) a dish of wok fried flat rice noodles flavoured with lemongrass and chilli, served with crunchy Asian greens, peanuts & nước chấm. We also ordered the Rau muống xào (£6.95) side dish; stir fried morning glory in garlic and soy sauce. If you’ve not tried this water spinach dish give it a go – I don’t know anyone that’s tried it and not loved it.

As well as ordering dessert I tried the Gin Spritz (£6.75) from the summer drinks menu; a refreshing mix of Tanqueray gin, fresh mint, cucumber and lime juice, and soda water. This was a lovely seasonal cocktail with a fresh taste and layers of flavour. We then received the Coconut Ice Cream (£4.95) and the Bánh sô-cô-la (£6.95) for dessert, which is a chocolate truffle served with green tea ice cream. My word, that pretty pastel coloured ice cream is something else; light but with an earthy green tea flavour that cuts right through the richness of the chocolate slab. I wanted to eat it again, immediately.

A great weekend lunch all in all and high praise should go to the staff also who were attentive, engaging and helpful. A healthy feast with lots of fresh flavours; Pho, you have my heart.

Have you eaten at Pho before? Do you rate the food? Let me know in the comments.

Disclosure: We paid in full. All views, photos and hungover self-pity are my own