Today’s post is a quick look at Tuck in Tuesdays at The Stable, where for £10 you get a pizza, salad and a drink.

I’ve talked about this John Bright Street staple before, having enjoyed Sunday pints and both the pizzas and the pies. The venue is large with the kitchen and bar sitting side by side; long benches fill the space. You grab a table and order food and drinks at the bar. It’s not fancy but it’s an easy place to spend an hour or so. 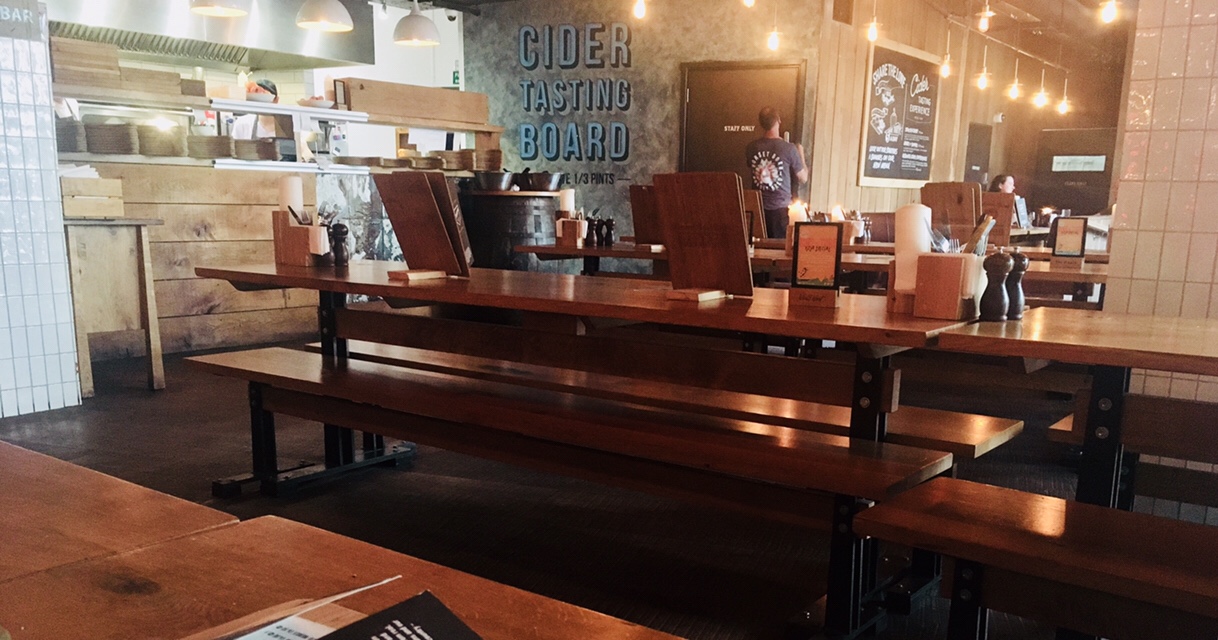 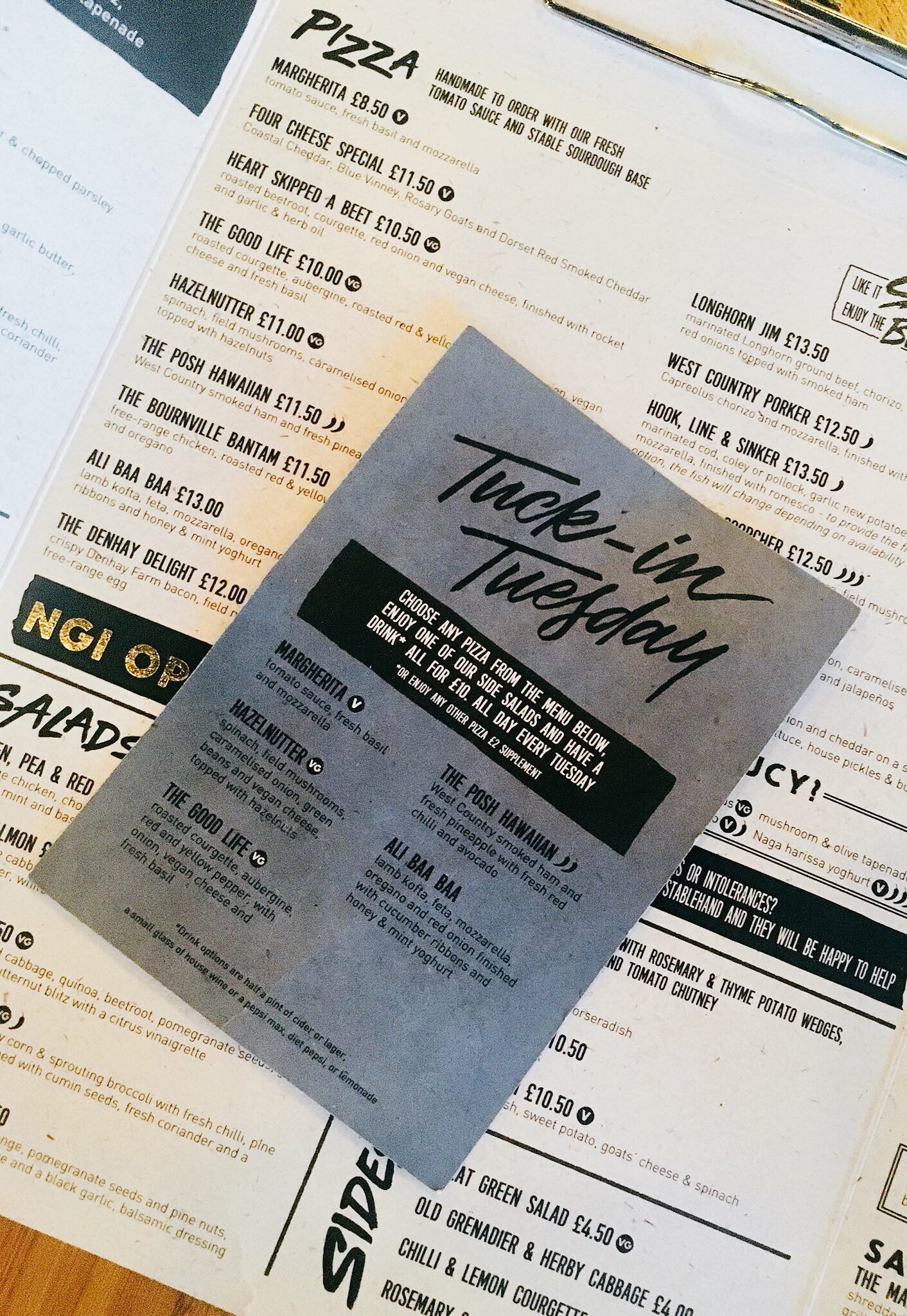 The reason for this visit was Tuck in Tuesday, something my husband and I had previously enjoyed. For a tenner you get a choice of pizza from a small selection (you can upgrade to any others for £2) plus a green salad and a drink of your choice. When you consider that a pizza here will usually set you back about £12-£13 this is a pretty good weekly offer. At least it is when things go to plan..

We went for the Ali Baa Baa and a Margherita, and sacked off the draft drinks for wine. Partly because it was a better offer and partly because we’d both had the kind of days that make you want to drown yourself in alcohol. On this deal you can also choose half of any beer or cider, or a soft drink to go with your pizza. 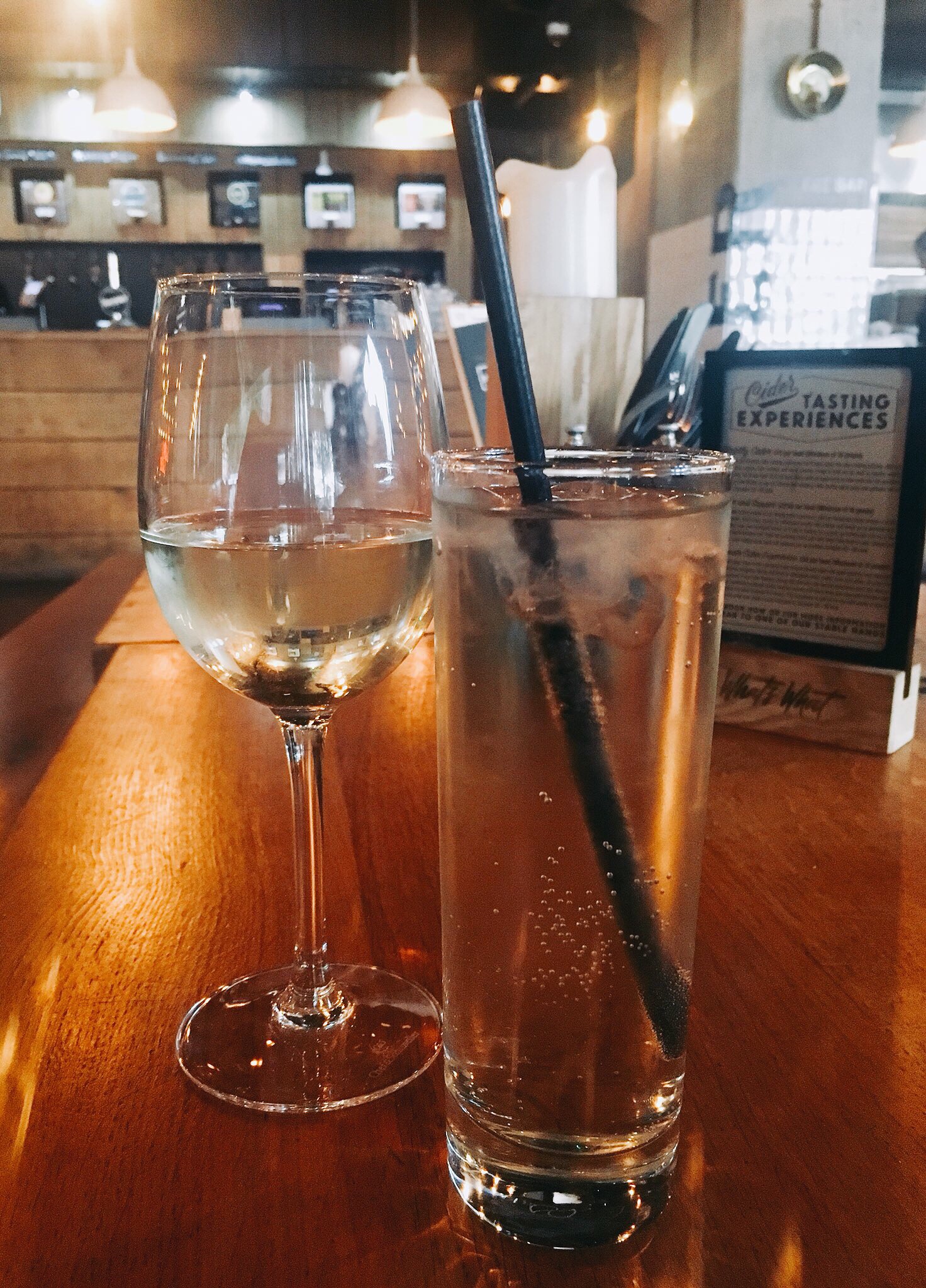 Being that there was only a handful of other people in there, I was pretty bemused why it took over half an hour for our pizzas to arrive. When they did hit the table it was clear the extra time hadn’t been taken on presentation. While I enjoyed the meaty lamb kofta chunks, mine was topped with so much (almost) raw onion and thick cucumber slices it felt more like a deconstructed kebab than a pizza. Those ‘ribbons’ of cucumber looked suspiciously like the thick slices also found in the side salads. In fact, I know they were, because I watched the server move them over. Nice. 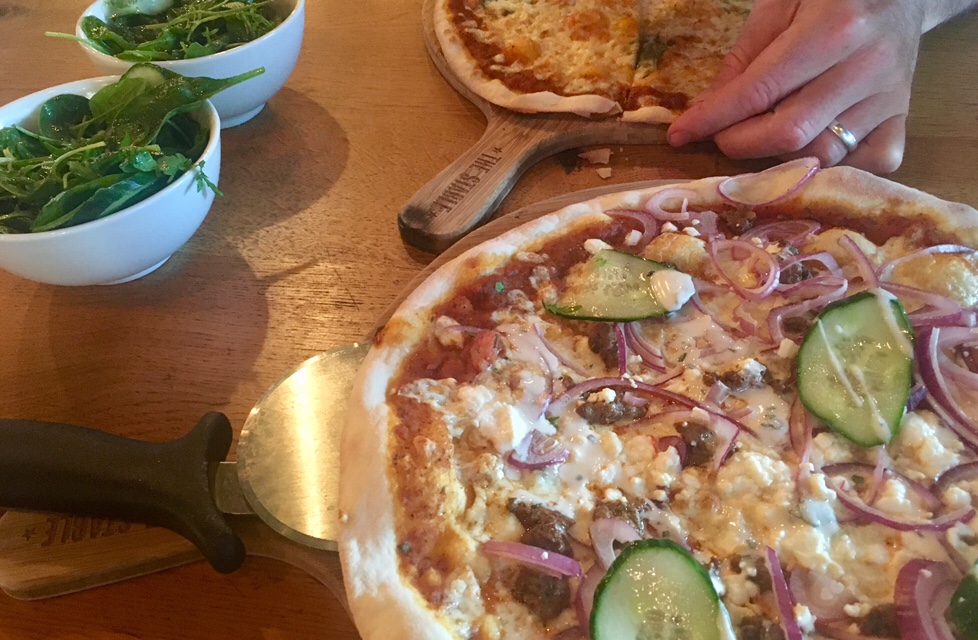 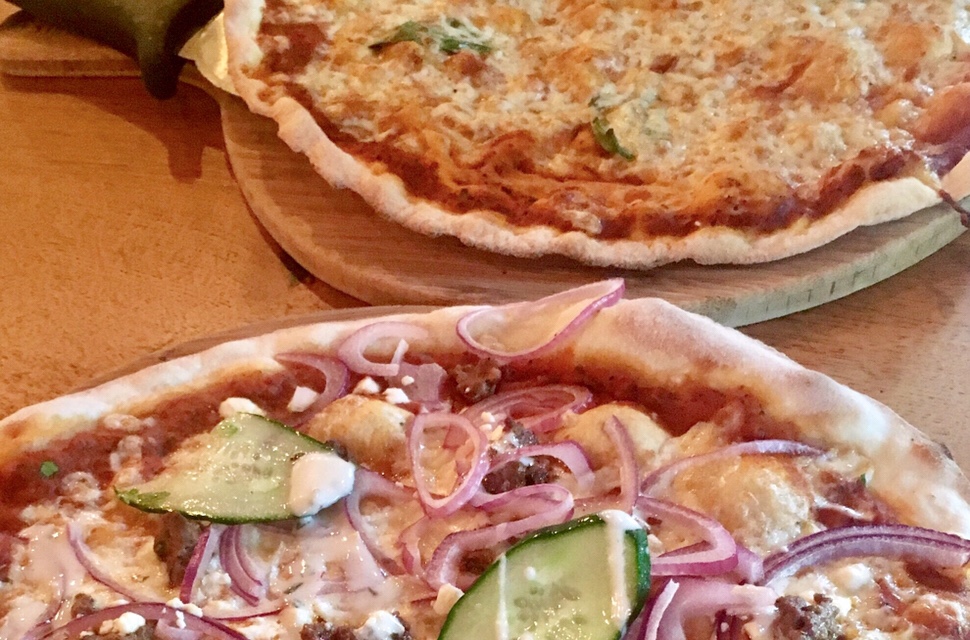 It tasted fine overall (once I’d removed half the onions) and the thin base was crispy, but it just felt lazy. Thankfully I faired better than my husband, who was given a cheese and tomato offering so over cooked it had dried out completely. The mozzarella was dehydrated to the point where it snapped faster than me on the phone to Plusnet. After one slice Ian – who will avoid sending food back at any cost – conceded it was naff. His complaint was handled admirably by the on duty manager, who organised a replacement which arrived within five minutes. A much better marg, this one had plyable cheese and a more satisfying chew. 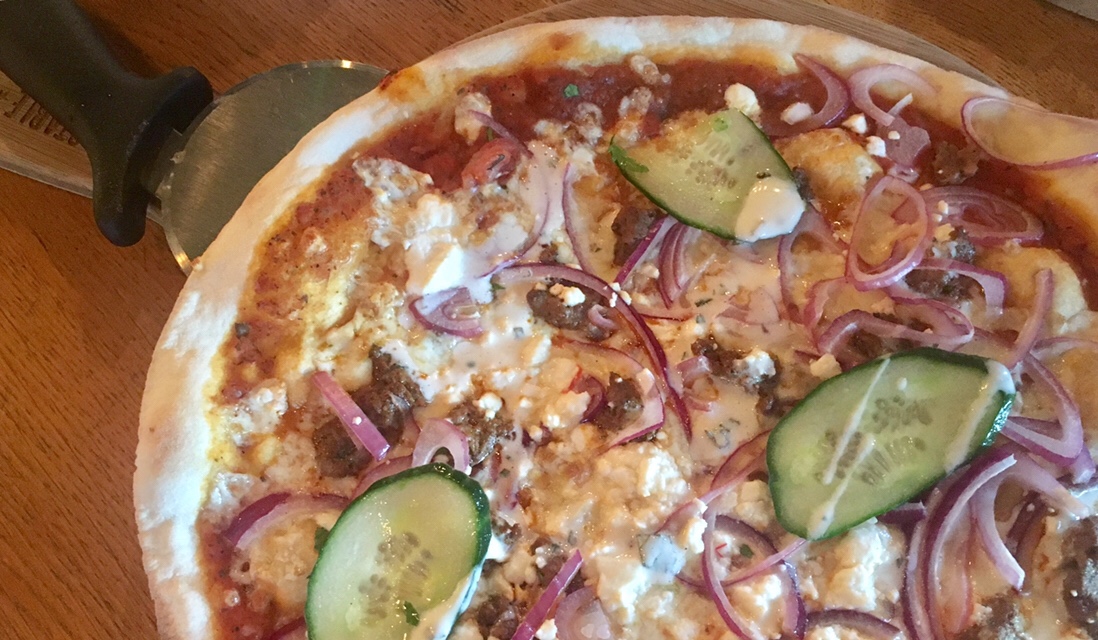 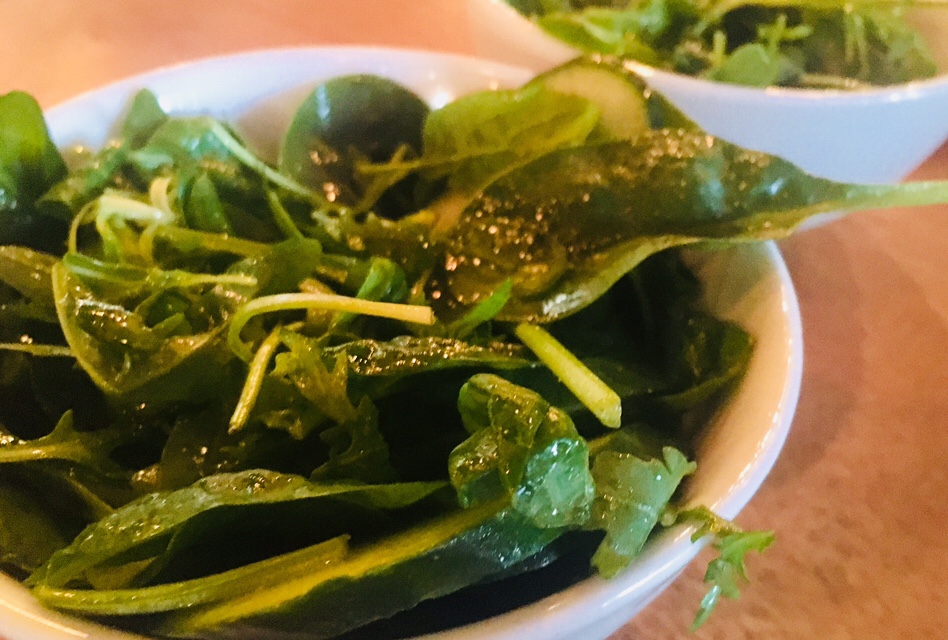 The side salad of mixed leaves and cucumber in an olive oil dressing was fine (hard to get excited about leaves) but perhaps it would be nice to have that oil on the tables to drizzle over pizza or dip crusts in. I prefer a bigger crust to chew on; a lightly charred one I can dip in oil. If you feel the same this place isn’t for you.

There are better places to get pizza in Birmingham (check out my favourites) and, despite this deal being just a tenner, I don’t think I’ll go back again based on this. I wasn’t expecting anything life changing but the food just felt a little sloppy. The kitchen staff need to be as attentive as the bar staff, who I couldn’t fault throughout.

Are you a fan of The Stable Birmingham? Let me know in the comments.

The Stable, 115 John Bright Street, Birmingham, B1 1BE

Disclosure: I paid in full for both meals. All words and photos are mine.