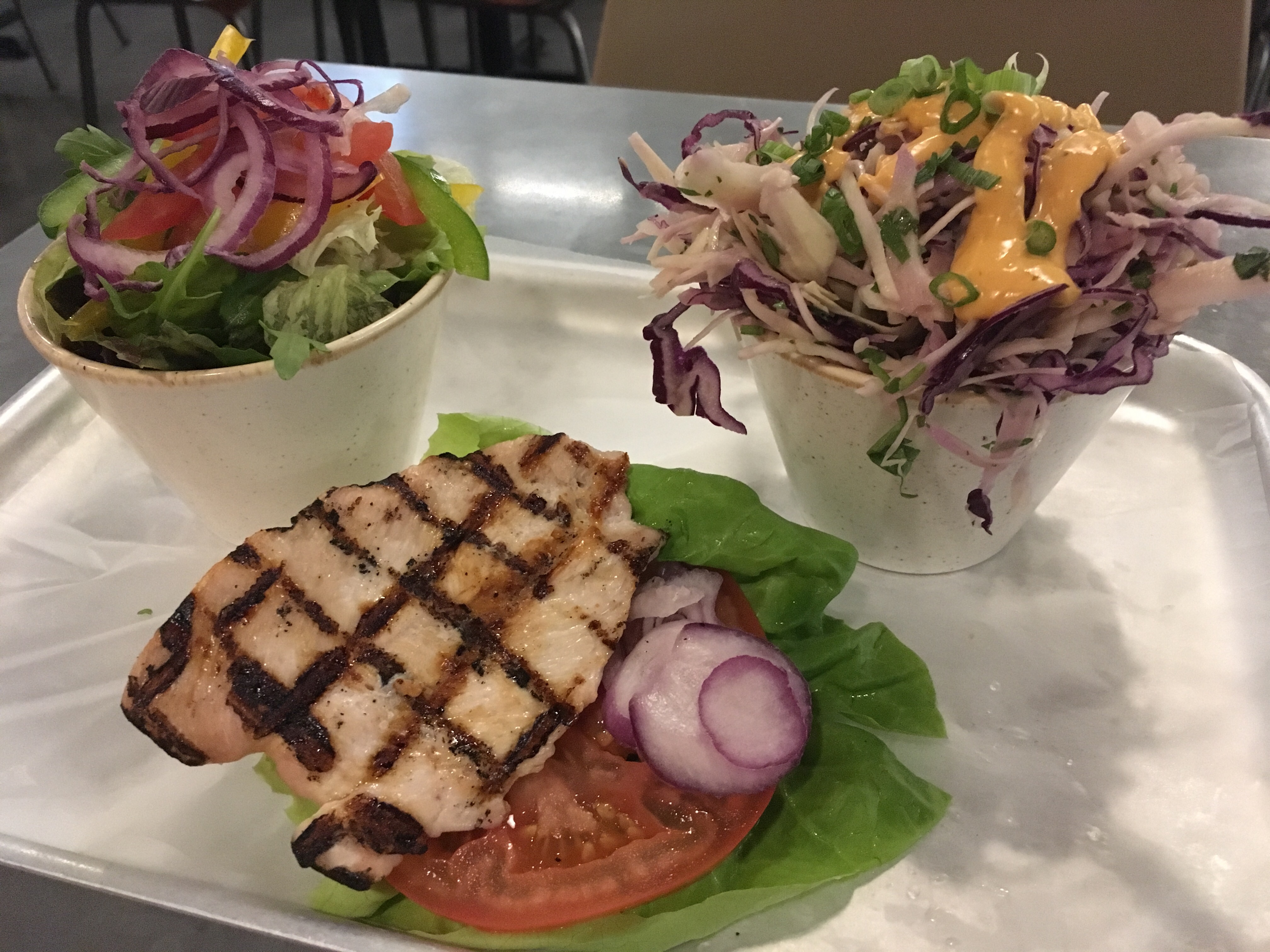 Before I dive in to this post I should say from the off that I appreciate going to a burger place and attempting to be healthy is a bit redundant but, in my defence, I’ve been to Handmade Burger Co before and eaten like a beast, so I’m more than aware it’s usually reasonable in terms of sloppy cheese and big portions.

Last week I decided to grab a quick bite at the Grand Central branch, having seen their lunch menu which starts from just £5.95 – for a burger and a side that’s a bargain! Or so I thought..

With a healthy mindset I ordered the chicken classic and a side of jalapeño slaw for £6.95, and I went “bunless” choosing salad instead of the bread. Now, at this point I should point out I am more than aware the lunch menu states both items are small, but I wasn’t quite prepared for the laughable portion of chicken that arrived. On the surface it looked ok but once I moved it I realise how things were not as they seem.

The spicy slaw was spilling over the bowl, and the salad bun replacement was just dandy – no problems there, in fact I’d say for a small portion the slaw was very reasonable. But the chicken ‘burger’ was laughable – just take a look at the photo below.

I know I’m a bit spoilt with regards to burgers now, but good lord – I’ve had pancakes thicker than that. Whilst I appreciate a cheaper lunch menu may mean a slightly small portion, the wafer thin grilled chicken couldn’t have been more than half a butterflied breast at best,  and hammered out so thin it was overcooked. Honestly, it was so dry that it could almost be snapped in half. Disappointing to say the least.

Deciding it wasn’t worth suffering in silence (I was so hungry I couldn’t stop myself saying something) I spoke to one of the servers who agreed it did look smaller than usual and offered to replace it for me. NOTE: He was very polite and incredibly eager to help – so mega props to him, especially during the lunch rush which I can appreciate isn’t ideal.

Five minutes later a new, decent sized piece of griddled chicken arrived and I thanked the delightfully helpful chap for making my meal a more satisfying one. The second piece was a little over charred but at least had some texture, and with a dollop of the (actually rather delicious) slawon top  tasted fine.

Thanks to the larger sides I didn’t leave hungry but I won’t be back for the lunchtime deal again. For the same price you can get some cracking burgers – many of which come with a drink – at non-chain restaurants and bars, and next time I’ll be sure to park myself there for lunch instead.

Having said that, the staff were all delightful and the venue itself makes you forget you’re essentially in a train station. There’s plenty of choice on the main menu, and I’d advise sticking to that if you visit this chain.

Have you eaten here before? What did you think? Let me know in the comments.

Disclaimer: This post is not affiliated with any brand/product mentioned within. All words, photos and opinions are my own

FREE WINE!!! Enjoy a FREE glass of Old Station Malbec when dining from the Steak House Menu at @OpusCornwallSt with the IB App. Download now at: https://www.independent-birmingham.co.uk/our-app/ to enjoy ace discounts/deals at over 125 of Brum's best independents - all for £1.99 a month!