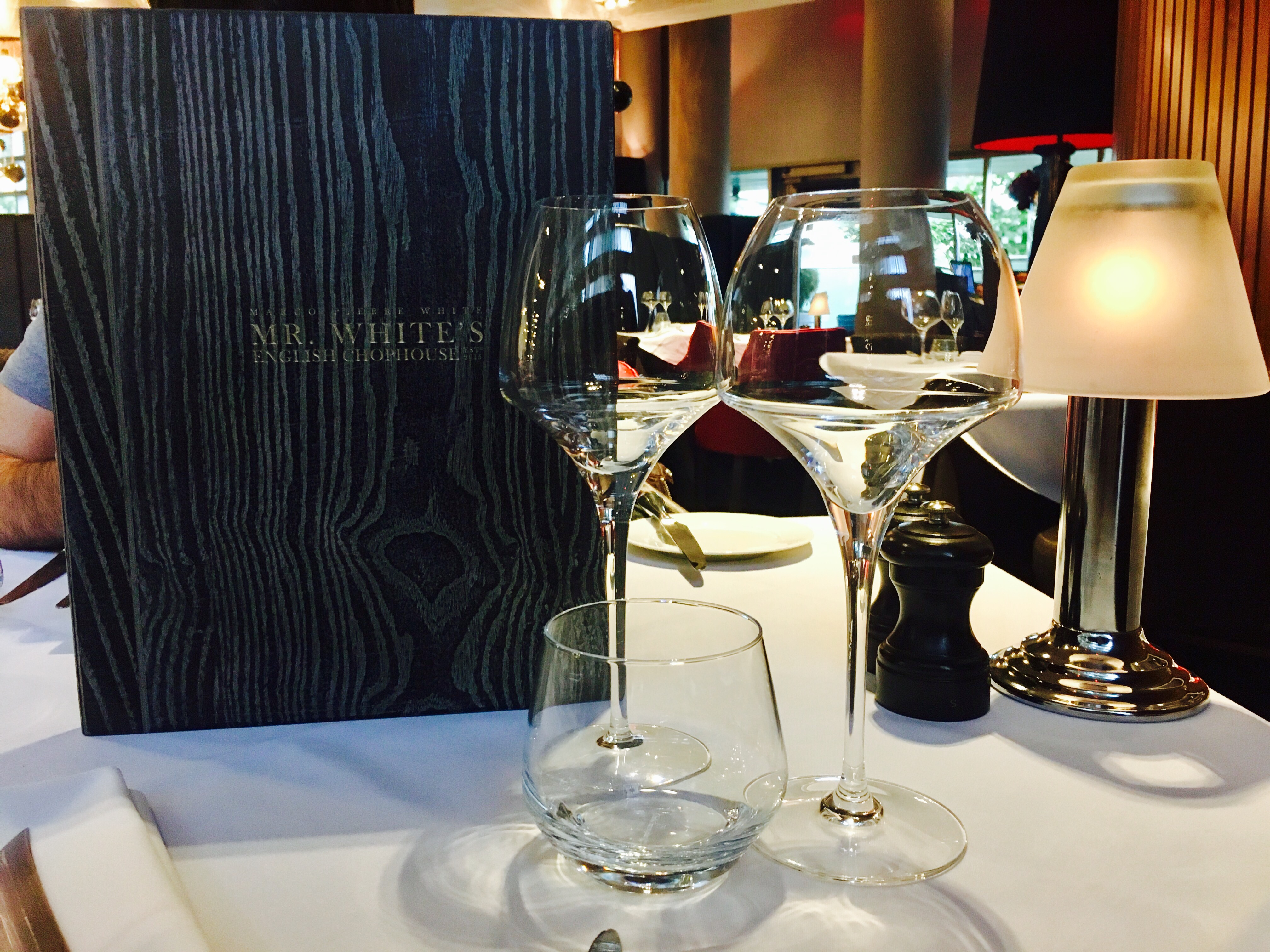 Having meticulously planned a weekend of surprises for my future husband – including a visit from 6 of his good friends from back home – I was feeling kind of smug with myself recently. I was pretty convinced in advance I’d arranged a fairly perfect weekend for Ian, but it managed to get even better when I bagged us a table at Mr White’s English Chophouse; the in-house Marco Pierre White restaurant in Hotel La Tour.

Offering English dishes with French culinary flair, not to mention some seriously fine steaks, the concept of MWEC has its origins in 18th century London. The story goes that well-to-do business men of the time would use ‘chophouses’ to make deals over a glass of wine and slab of beef; beats FaceTiming clients over a tuna panini in Costa, let’s be honest. Whilst I’d not dined in Mr White’s English Chophouse before I was, however, already a fan of the 4 star city centre hotel it can be found in. Not only because the rooms are fabulous (the showers play music, I’m easily pleased) but the joint offers seriously good food. I stayed here for my birthday this year and enjoyed the hotel visit very much.. almost as much as I enjoyed the vast buffet breakfast the next day.

Having had a boozy (busy, I meant busy) start to the weekend, I was looking forward to a more relaxed Sunday night dinner with my beau, and as we arrived at the restaurant early evening I sensed immediately we would be in good hands. Having been greeted and seated by our friendly waitress, Lina, we were talked through the revamped menu and ordered our drinks. I’d heard on the grapevine that Mr White’s English Chophouse is gaining a pretty formidable reputation for its new ‘back to basics’ classic cocktails, so I opted for the Margarita (£9.95). Using Olmeca Altos Plata Tequila plus Triple Sec and lime juice, the tang of citrus combined with the sweetness of orange liqueur and the distinctive hum of tequila ensured this tasted just like the Mexican favourite should. Having had a truly rubbish Marg at Be At One recently, this reminded me how wonderful this simple cocktail can be.

Cocktail in hand, I scoped out the (admittedly quite quiet) restaurant as we awaited our starters. As with much of Hotel La Tour there’s photographs of Celebrity Chef and owner of the restaurant, Marco Pierre White, everywhere. Literally, everywhere. The decor is smart and sleek, with lots of dark furnishings and fabulous light fixtures for a touch of gothic glamour. With the red, white and black decor, plus the various moody snaps of Marco through the decades, it feels a fraction on the dramatic side. It’s a good use of space though, and I also noted the goblet size wine glasses that were absolutely pristine. The whole place is also spotless to be fair.

Time for starters, with Ian opting for the Salt and Pepper Calamari (£7.95) as I picked the Air Cured Beef with English Mozzarella (£12.50). A healthy portion, the rings of calamari were coated in a crisp, light batter and the heat of the red chilli was warming yet subtle. As for the beef, sliced paper-thin and served at room temperature the tasty cured shavings served as a savoury bed for the delicate balls of mozzarella. The additional extra virgin olive oil gave the whole dish an even silkier texture.

As you’d expect from the restaurant’s name and inspiration, meat features extensively on the main menu; there are just two vegetarian options. As well as fish, pies and even a chicken salad for good measure, the star of the show is undoubtedly the beef. Three cuts of steak are available – fillet, rib eye and sirloin – and all are aged for 35 days before being prepared with precision, we’re told. We both decided on the 8oz Fillet Steak (£34.00) cooked medium and I add Blue Cheese Sauce (£3.50) to dip my Triple Cooked Chips (£3.75) in.

With so much richness on one plate, and already feeling a bit like Henry VIII in a dress, I decided to throw caution to the wind and try the Creamed Cabbage with Bacon (£3.75), and Ian added the Grilled Field Mushrooms (£3.75). Our steaks arrived promptly after the starters and looked beautiful. Having ordered mine to be cooked medium I was a little disappointed not to see more of the juicy pink line running through the centre of the fillet, but having sliced a piece to try (it was delicious) I chose to continue.  The blue cheese sauce was pleasant but lacked the punch I had hoped for; perhaps a matter of personal taste, I just like to really taste that strong flavour. We both enjoyed the decadent creamy cabbage (sharing this side along with the four meaty field mushrooms), using the thick triple cooked chips to mop up the residual sauces and juices.

Despite being ready to roll home, we were talked into (yeah right..) ordering dessert. With my wedding diet now laughably out the window, I decided to take Sunday by the proverbials and order the Sticky Toffee Pudding (£6.50) with ice cream. Arriving with an additional mini jug of warm toffee sauce, my dessert resembled a volcanic eruption of sugar once Lina poured the molten sauce over the ice cream at the table. Spectacle aside, this pudding was dreamy. The light sponge ensured it wasn’t a heavy dessert, allowing the rich toffee sauce and cool vanilla ice cream to tickle the tastebuds without a sickly end; a blissful way to finish the meal. Ian loved his enormous slice of Baked Vanilla Cheesecake (£6.50), commenting on the velvety smooth texture of the cream cheese and thin baked crust.

A well executed three course meal, with the sticky toffee dessert being the unexpected triumph for me, and helpful staff a plenty; Lina especially was an absolute delight. The restaurant initially lacked atmosphere due to a lack of guests, but by the time we left – around 7:30pm – it had started to pick up. We were told a live musician plays during the busy Friday and Saturday night services, so maybe time your visit to get the most from the Chophouse experience. I also discovered there’s a daily Happy Hour, allowing guests to enjoy selected cocktails for just £5 from 5pm-7pm; worth noting if you’re planning on including these to your meal.

*Disclosure: I paid in full. All opinions and extreme close up pudding photos are mine too*