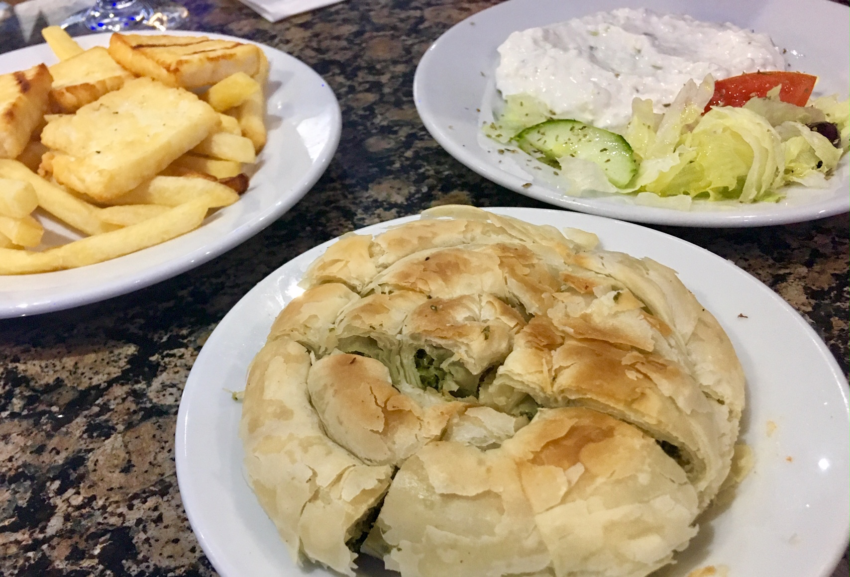 The more avid readers of this online diary of shame blog will know that I love a supper club. So much so that I’m an active member of two.

Supper clubs are brilliant. Aside from eating all the things and drinking enough wine to pickle a small horse, you regularly get to spend an evening gossiping with people you like about things you don’t. Delicious food and complaining with friends – show me a better combo. This month both of my supper clubs happened to fall within days of each other. This means I had a lovely start to August but I already need a week off socialising because I’m incapable of turning down a glass of anything.

Unlike SC1 – set in my friend’s kitchen – the second always involves eating out. Sometimes it’s a pricy place, other times it’s a dive; often it’s an old favourite we’ve all previously enjoyed, occasionally it’s a random suggestion from someone who wants to try something new. We call this ‘going rogue’ because it could be a total shit-show, but you don’t know unless you try and, frankly, we enjoy the drama. We throw venue ideas into a group chat and our friend Mark (who loves extra life admin for some reason) inevitably ends up making some kind of Doodle Poll to organise us. Most of us don’t read it but it makes him happy so we just let him keep making them. Thanks for your loyal SC service, Mark.

This month we went rogue. Having talked extensively about Greek food, and deciding we would have a more frugal outing this month with a limited number of us, Santorini was the chosen midweek spot. A quick Google search in the taxi there told me it’s popular with customers seeking a quick bite ahead of a Hippodrome theatre visit… and John Barrowman. This proved to be true when I saw his face maniacally smiling back at me from the wall of fame alongside the cast of Benidorm. Don, the guy running the joint, loves everyone that eats at Santorini though, whether you’re famous or humble hungry locals.

This relaxed two story restaurant looks more like a cafe inside and sits on Hurst Street, a few doors up from Snobs 2.0. I’ve walked past it numerous times over the years (usually to get to The Meat Shack) making a note to visit. It’s never been high on my list of priorities, though, largely because it looks like a tacky takeaway from the pavement. My opinion on the aesthetic didn’t change much once we were seated, but as long as the grub is good and reasonable value it’s easy get over the somewhat dated appearance. 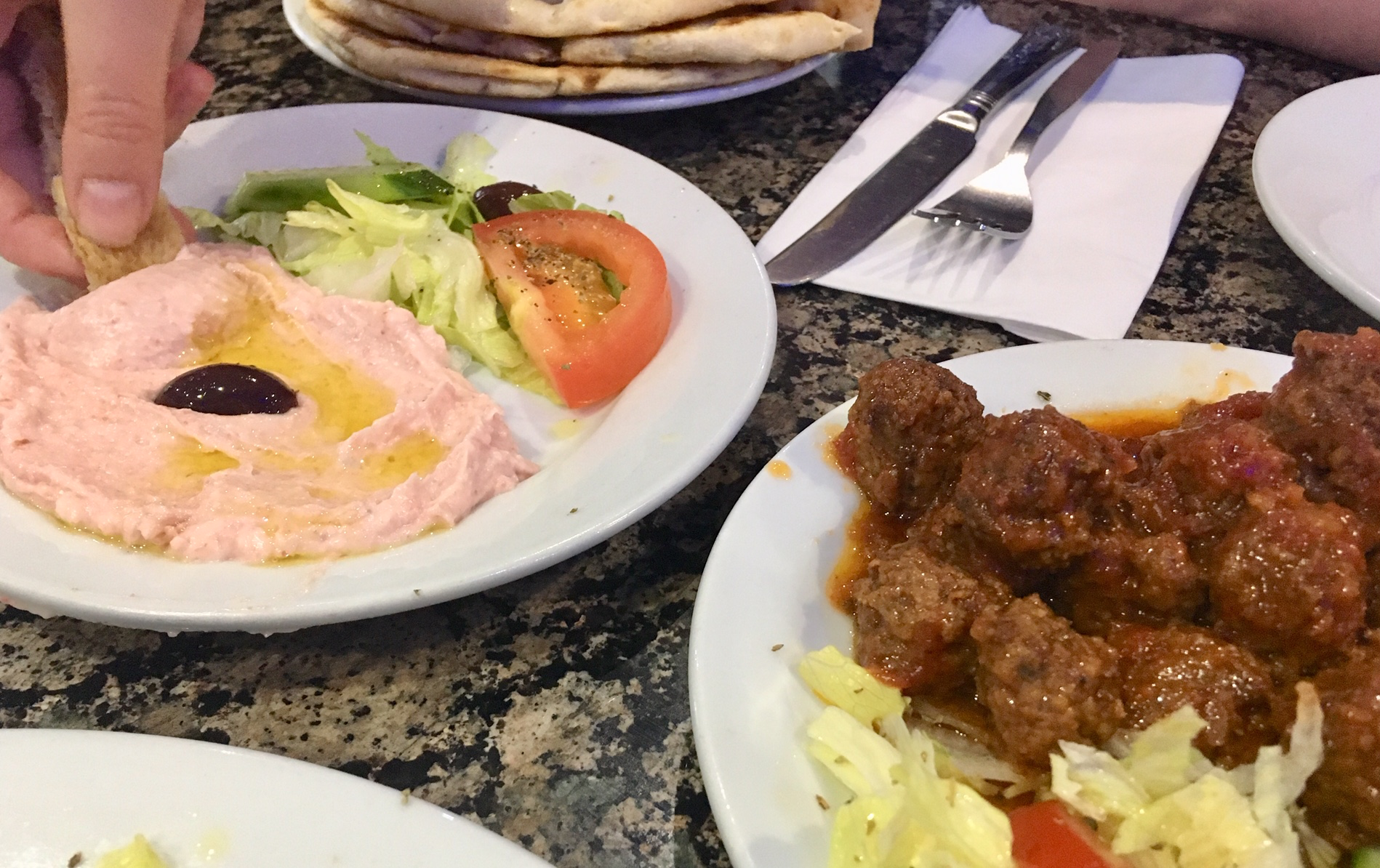 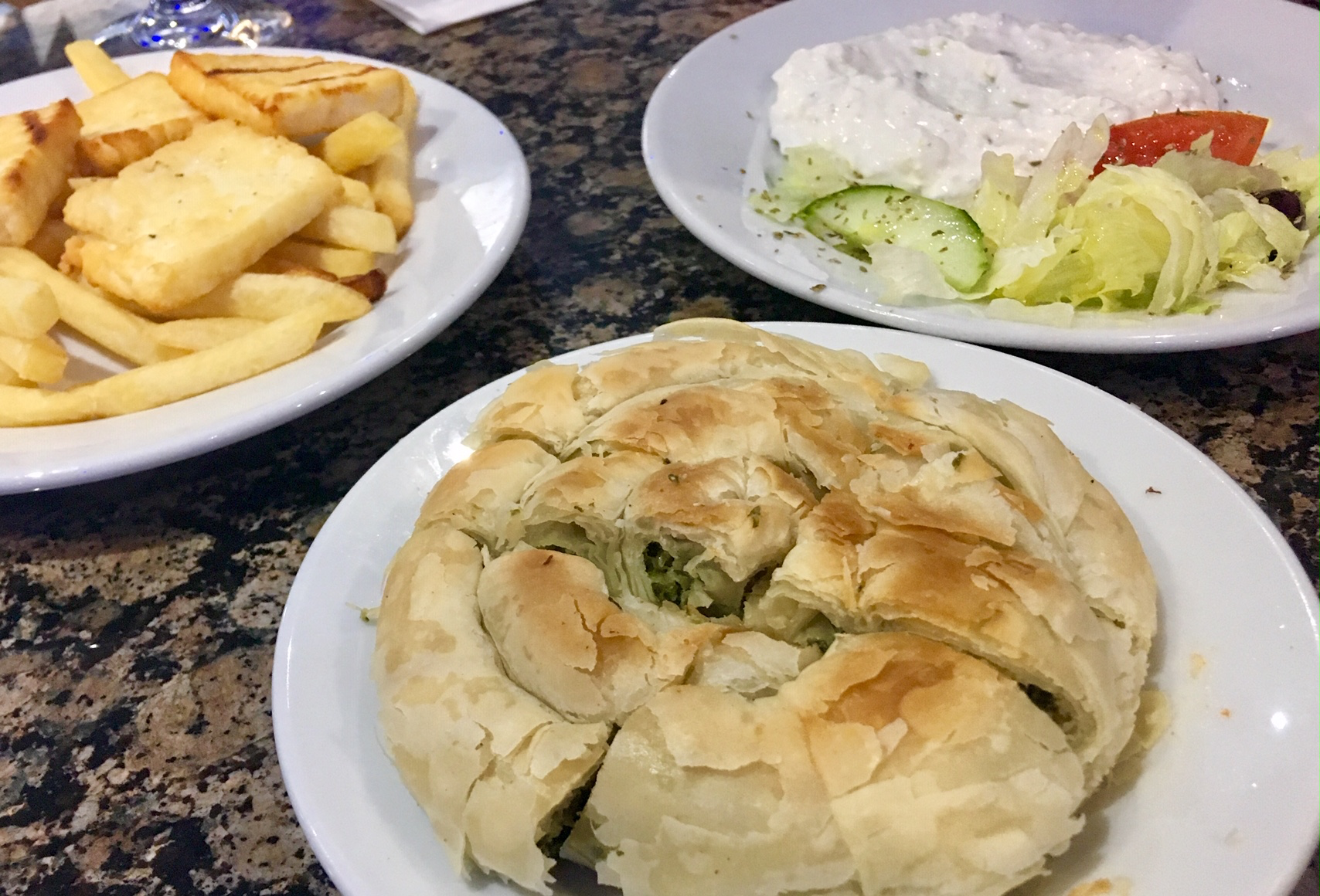 Over ordering lots of starters seemed to be the tactic on this visit, with a host of dips and a pitta mountain to get the ball rolling. The list we ended up with is embarrassingly long, but in summary you can expect to find a garlictastic melitzanosalata, unnecessarily pink but ultimately tasty taramosalata and a luscious, thick tzatziki alongside hot dishes like lamb meatballs, grilled halloumi and various pastries. You could quite easily spend a few hours working your way through these small plates (I say small – look at the size of this bloody Greek salad) without ever needing to get to the mains. 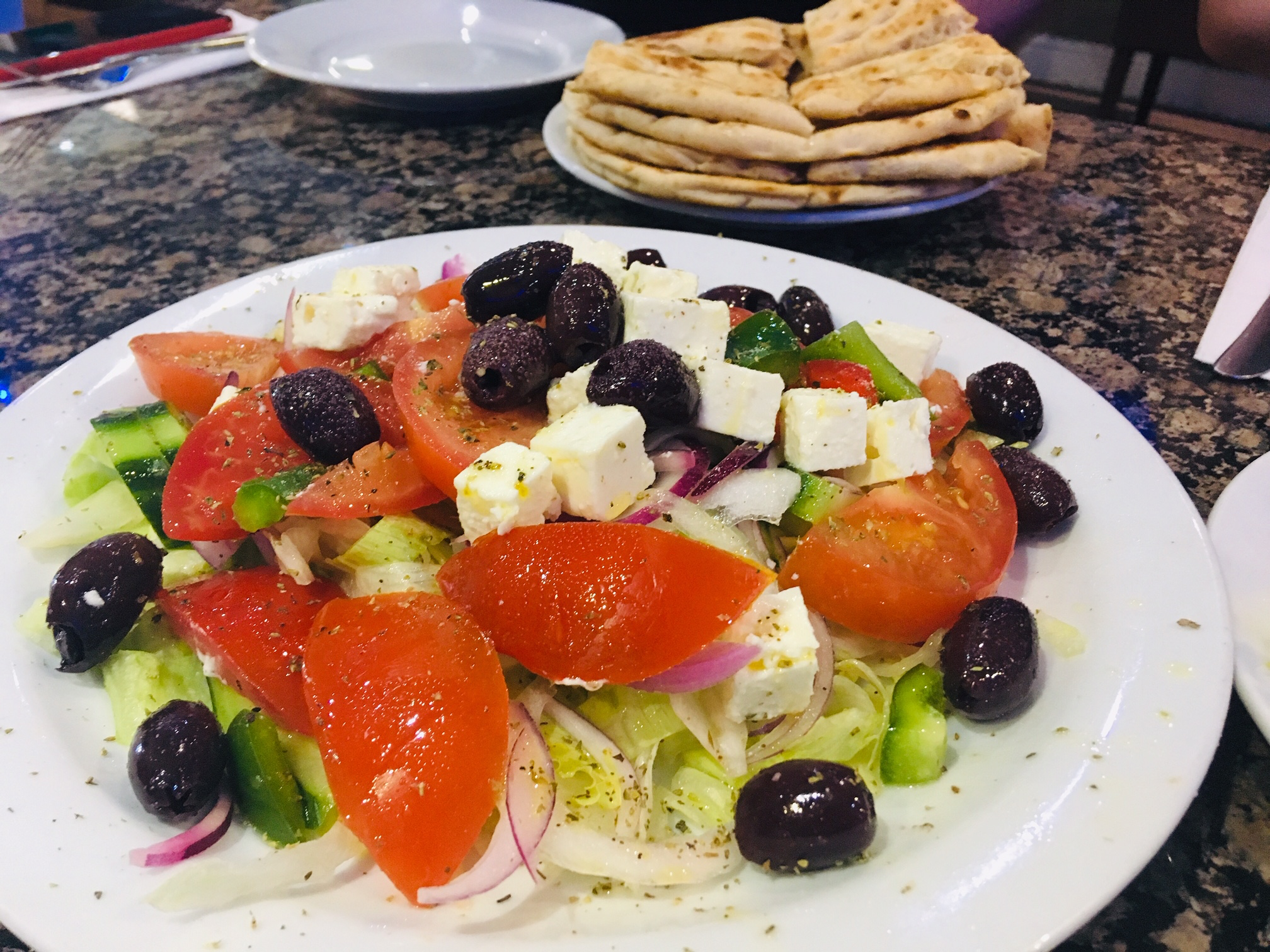 But speaking of mains there’s most of the traditional dishes you’d expect from a place like this, including the better than average moussaka and a mixed grill. There’s also about 16389 kebabs of varying types. They all come with rice, chips and potatoes (I’ll take carbloading for 100 please, Alex) plus a Greek salad. It’s a lot of food and despite only sharing two mains between 4 we couldn’t finish them. There’s also quarter pounder burger meals and pineapple pizzas for some reason. Let’s just pretend they’re not there.. 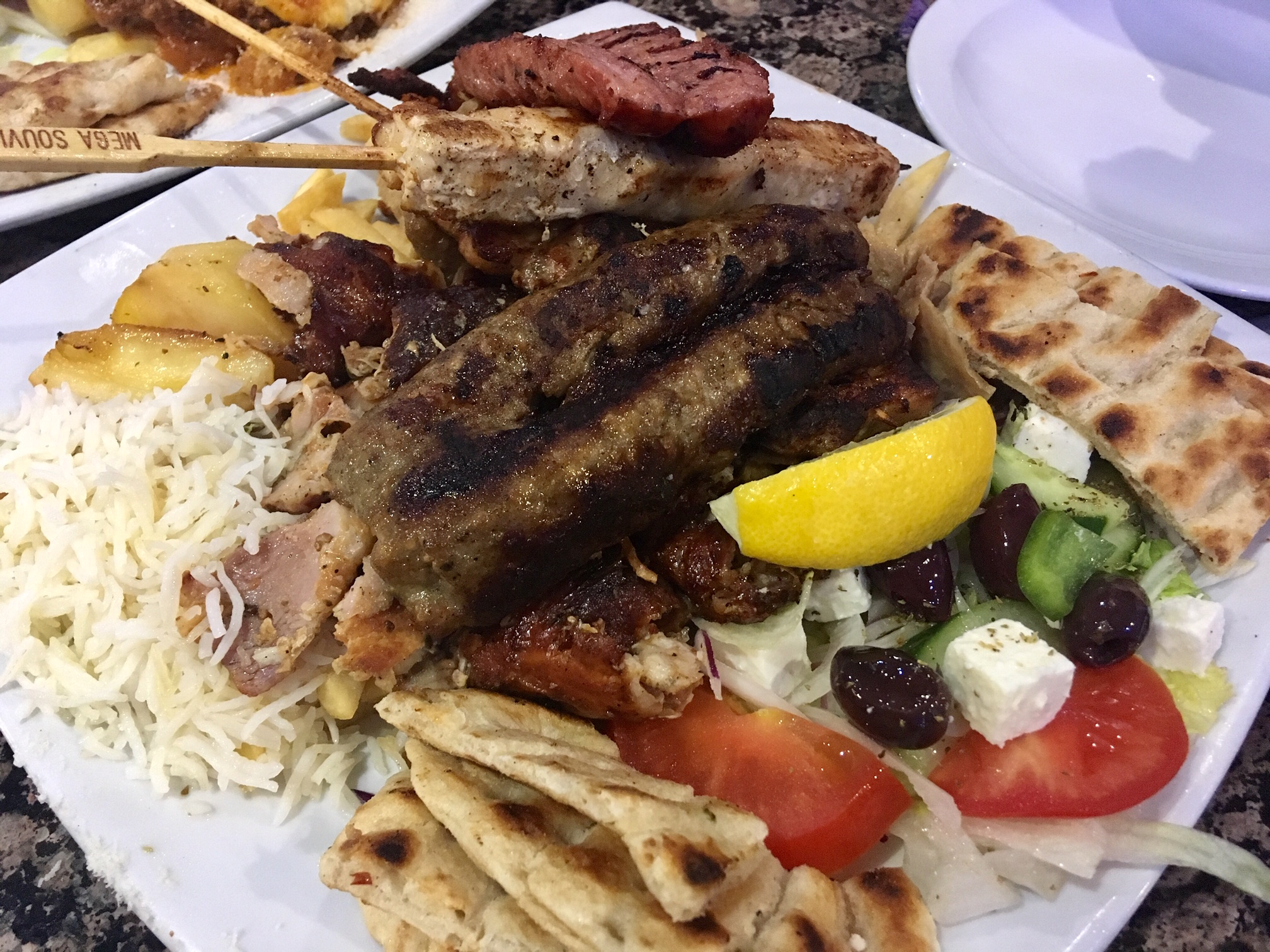 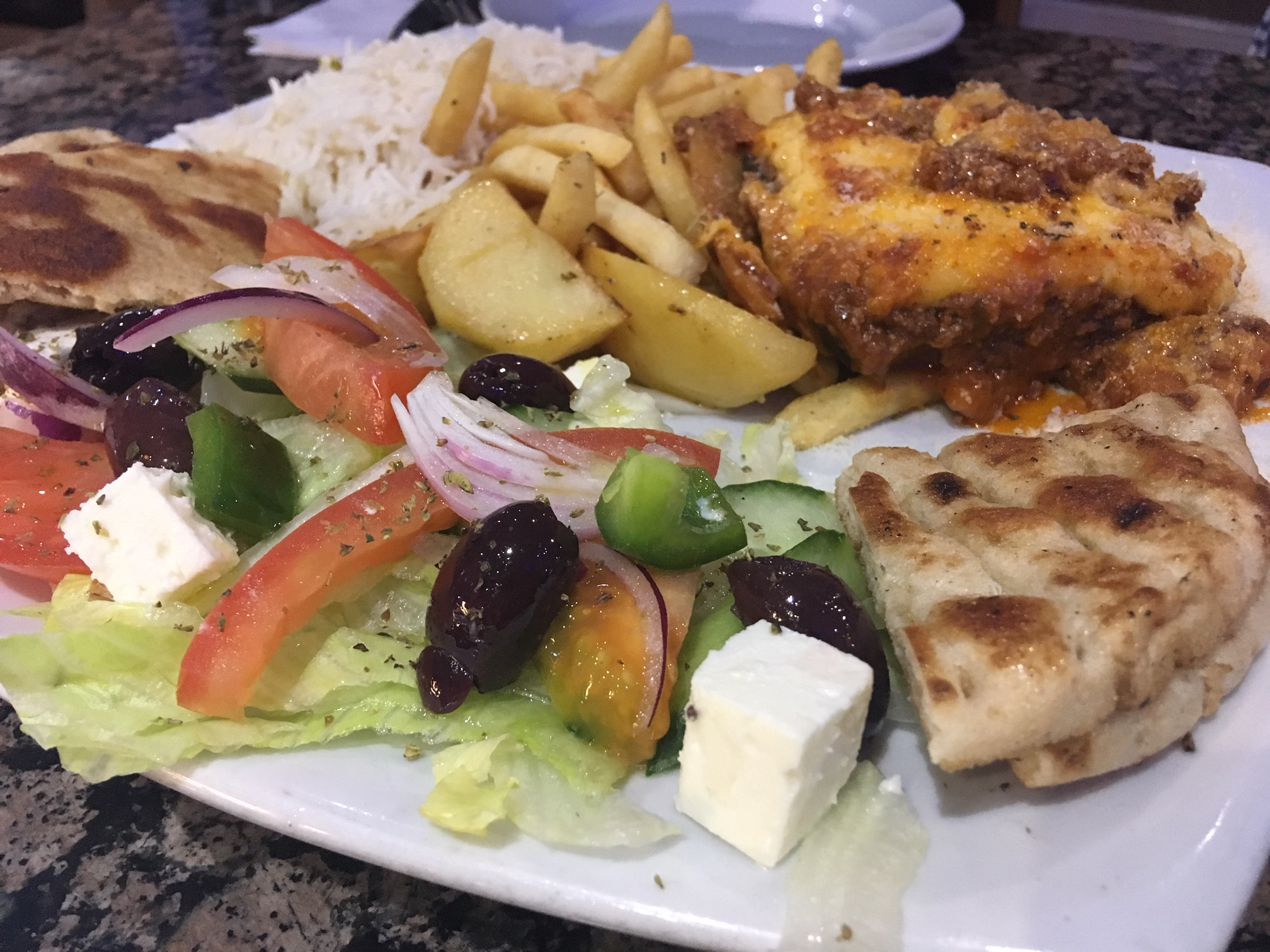 This groaning table of food with a few glasses of wine each came in at about £25 a head. I struggle to see how leaving that full for that little can be a bad thing, and if it’s good enough for John Barrowman and his weird accent it’s good enough for me. No frills food (like me it doesn’t photograph that well) and charming, attentive service – worth a visit if you’re around those parts, I’d say.

For an on the go alternative I like All Greek Streetfood by New Street station.

Disclosure: we paid in full for all food and drink included in this post. All words and photos from Santorini are mine.