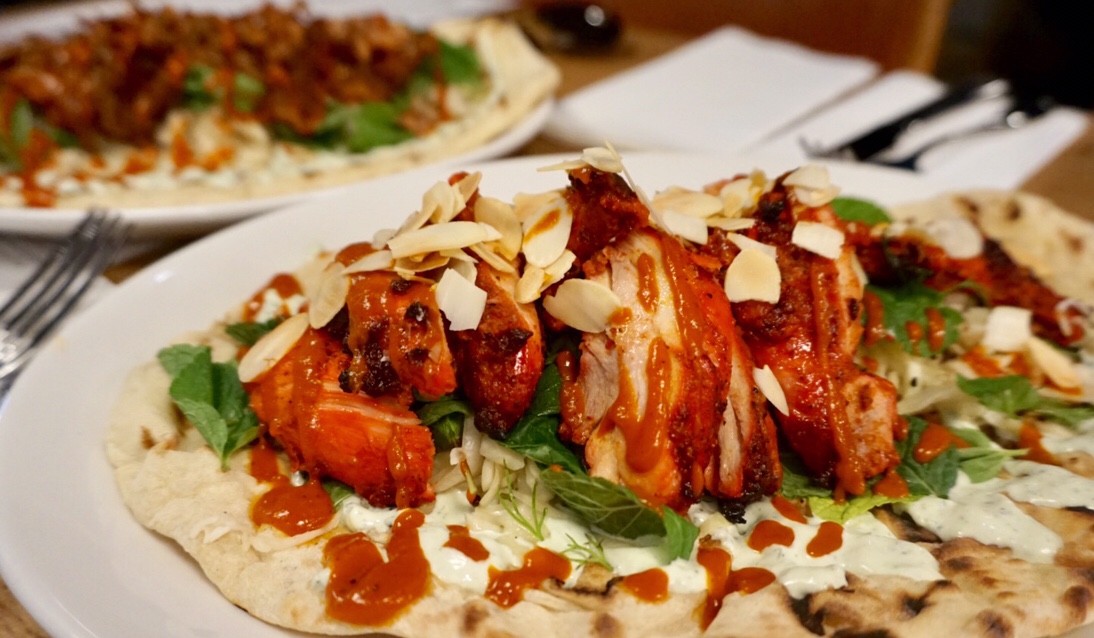 As you can tell (particularly if you’ve been following me over on Twitter of late) I’m loving the latest addition to Bennett’s Hill. My excitement about this place has – perhaps somewhat oddly – been based around a Scotch egg, of all things, which I fully appreciate isn’t usually something worth getting that pumped up about but here we are. As photos of dishes swarmed social media and the list of names associated with the new venue became public, I made damn sure I got my name down for one of soft launch events taking place on the run up to the opening. 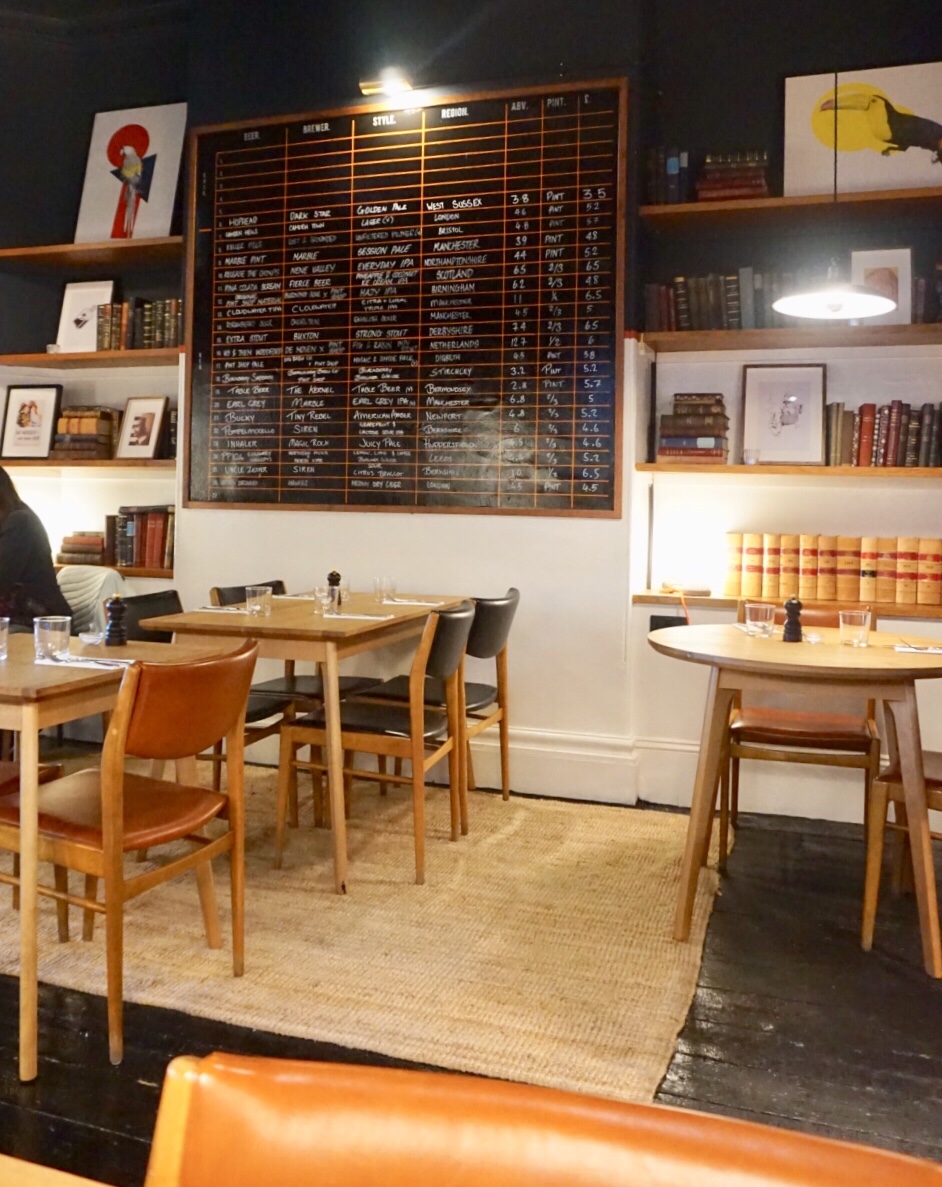 The venue itself is split over various floors and dining areas, with a whopping tap list. If you like beer without all the pretentious guff, this is a pub to try. Aesthetically it’s homely and attractive but unfussy, with plenty of seating and natural light. As well as a large bar there’s also a well stocked beer fridge; I knew instantly this will be where I find my husband when he goes on his next ‘man’s couple’ bender. 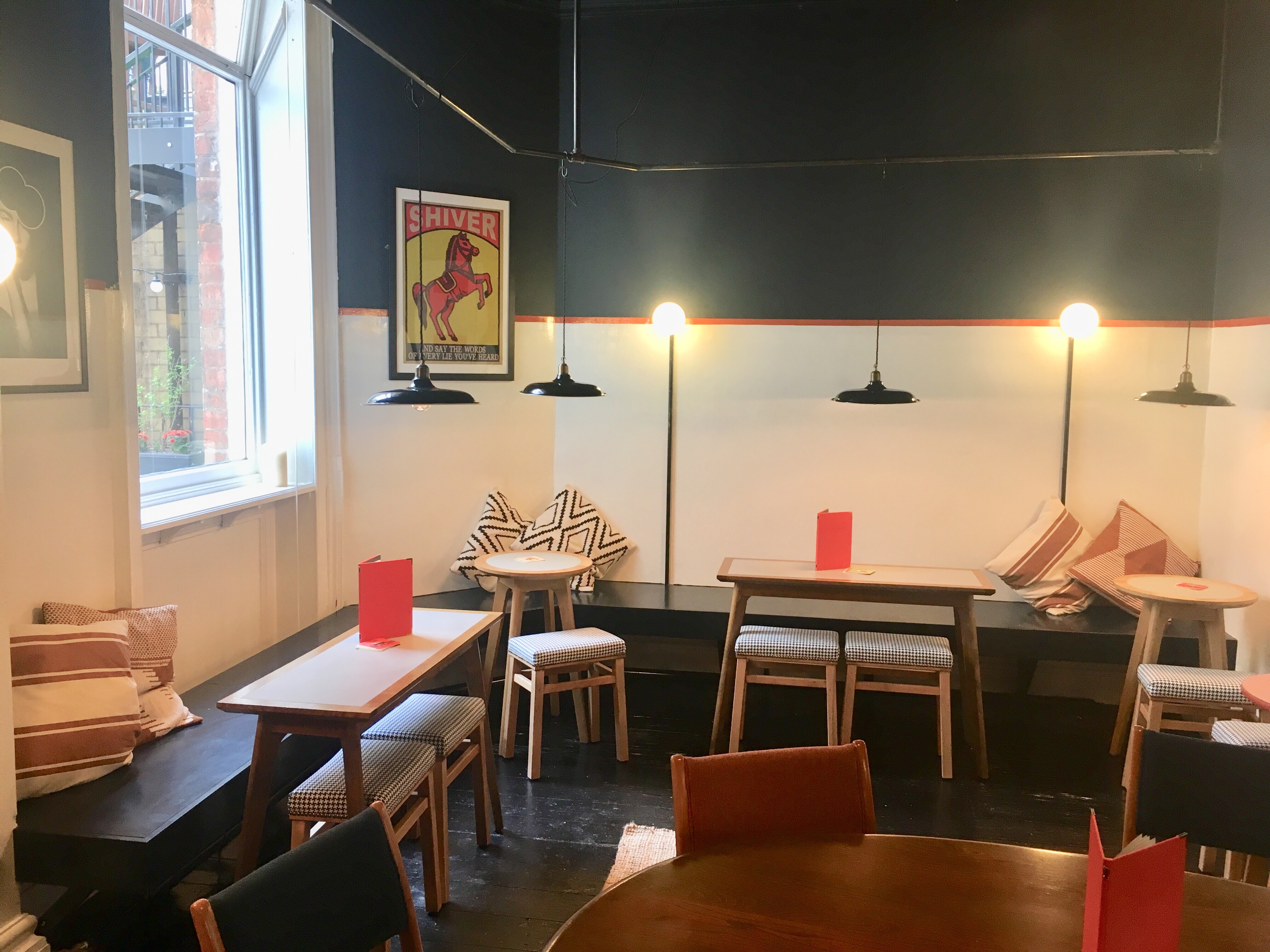 Somehow I managed to bag a table right next to the pass on the Sunday, allowing me to have a right good nose at what the kitchen was producing. Mark Walsh, formerly of Opus, is leading the team, which consists of some of the most friendly, positive people I’ve been fortune to chat with under a heat lamp. The table staff are all impossibly polite and attentive too; whoever trained everyone up here please go and work your magic at Bodega down the road, where everyone has apparently forgotten how to smile without crying. 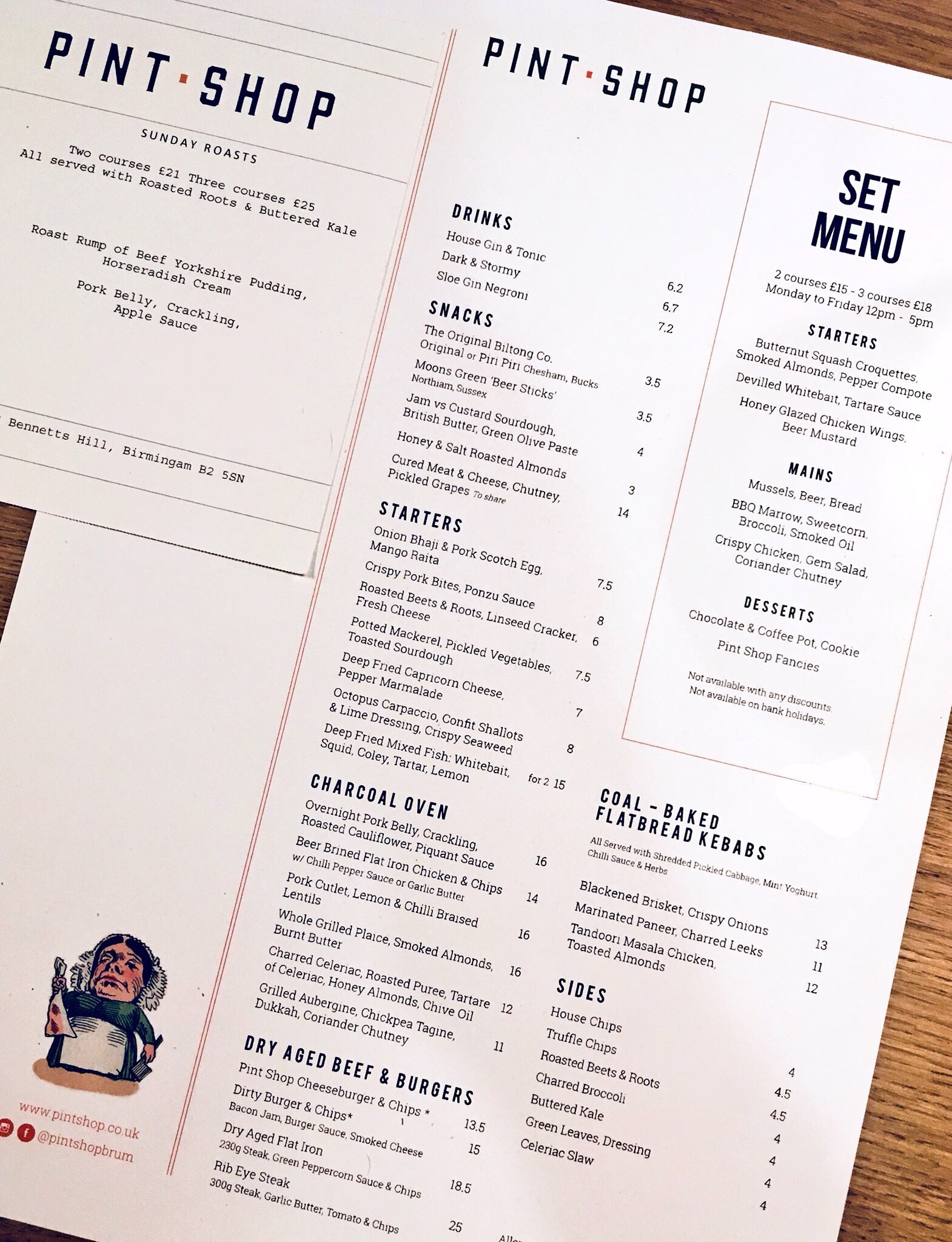 Back to the food… on the surface the menu arguably reads like your standard bar snack and pub grub offering, but don’t be fooled. Pint Shop isn’t fucking about, and neither are the talented men and women hidden away in the snug kitchen. This is not your bog standard bar food; it’s packed with attitude, creativity and flavour. It’s loud, proud and absolutely what this part of the city has been crying out for – if you want cheap boring sandwiches and bland snacks close the door on your way out.

A trio of starters kicked us off, all fried and all fabulous. The much coveted Onion Bhaji and Pork Scotch Egg (£7.50) will become the stuff of Brum legend – I’m calling it. A silky, soft set yolk is the golden prize cocooned within a savoury shell that managed to make my eyes roll back in my head. It’s porky perfection with an underlying hum of warmth from the chunky onion mix. The best of British with a nod to the city’s multiculturalism, frankly it’s a game changer. 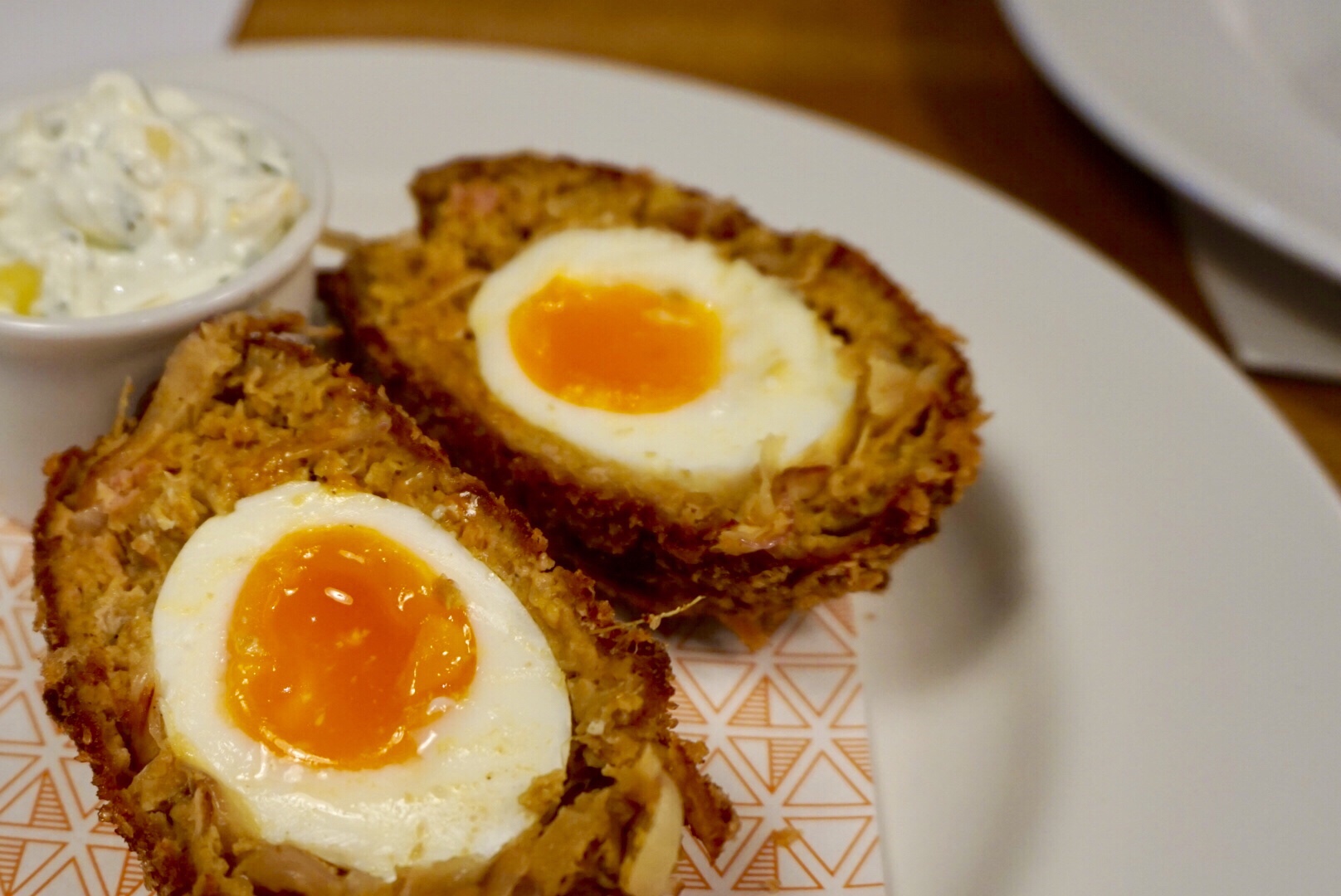 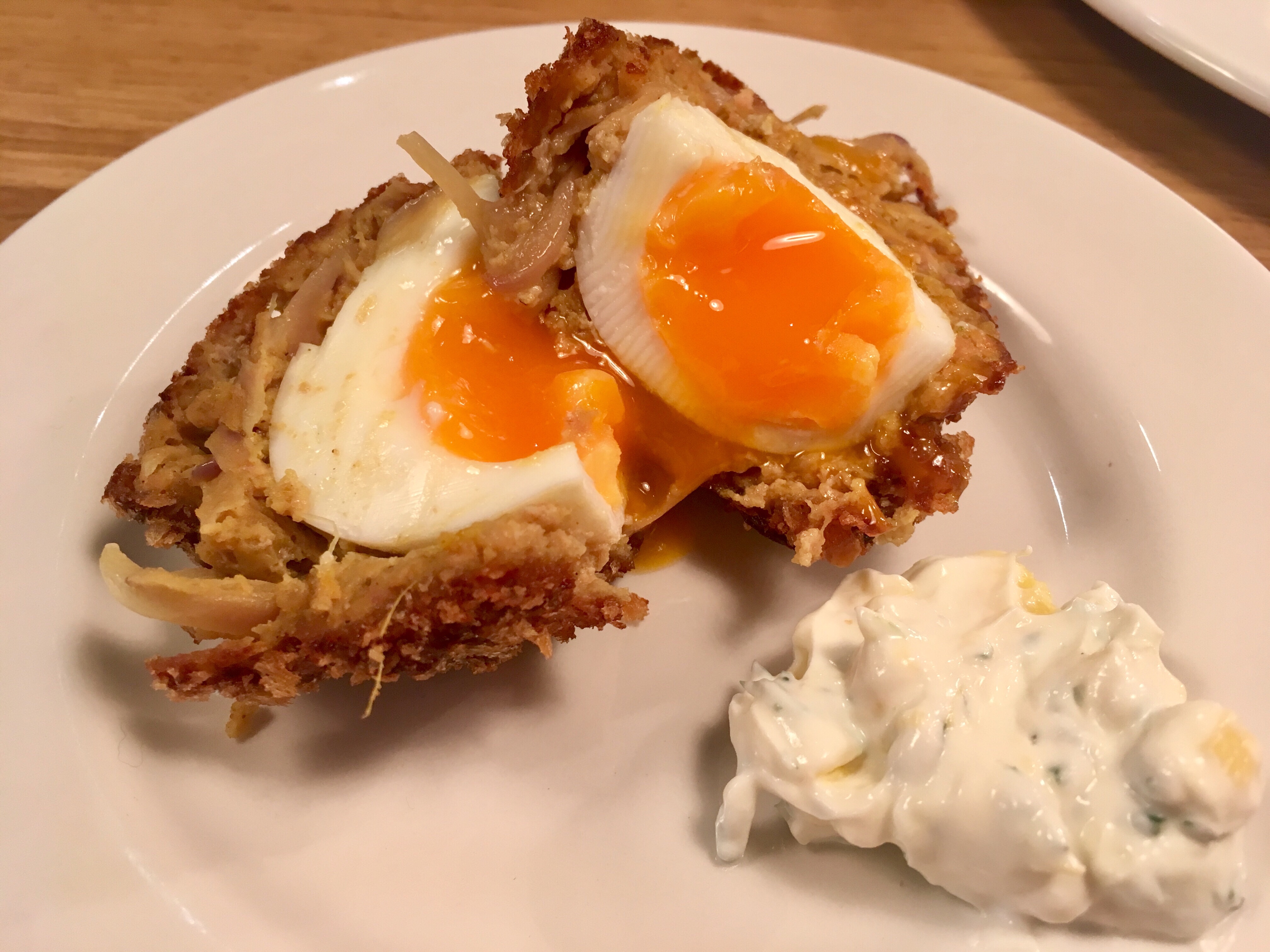 Sticking with the oink theme, the Crispy Pork Bites (£8) may not look like much but are flavour bombs. The fried cubes are jam-packed with tender pulled pig and shit all over anything like it in the city, especially when dipped in the zingy ponzu sauce. According to our server some people don’t like that accompanying sauce; those people are idiots. Not content with two plates of fryer-based sexiness, we snaffled the Deep Fried Capricorn Cheese (£7) too. Gooey initially then soft and crumbly at the centre, the mild but nutty flavour made for a satisfying cheese fix. It ain’t going to make you thin, but – if you’re anything like my hairy mate Mark who dined with me – it is going to make you happy. I wasn’t too fussed about the red pepper marmalade base lurking underneath, but you don’t buy a ticket to the theatre to sit in the underground carpark do you? 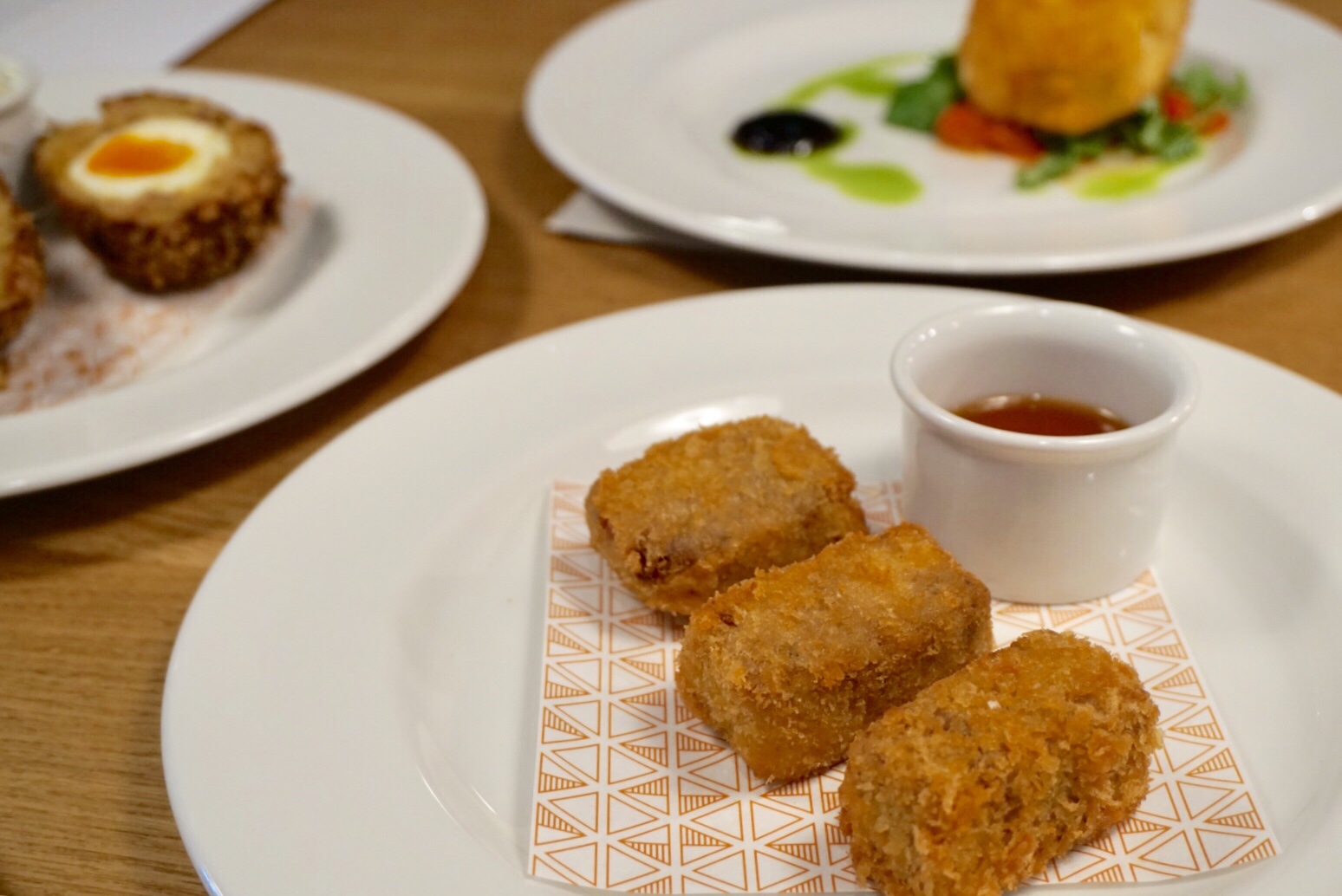 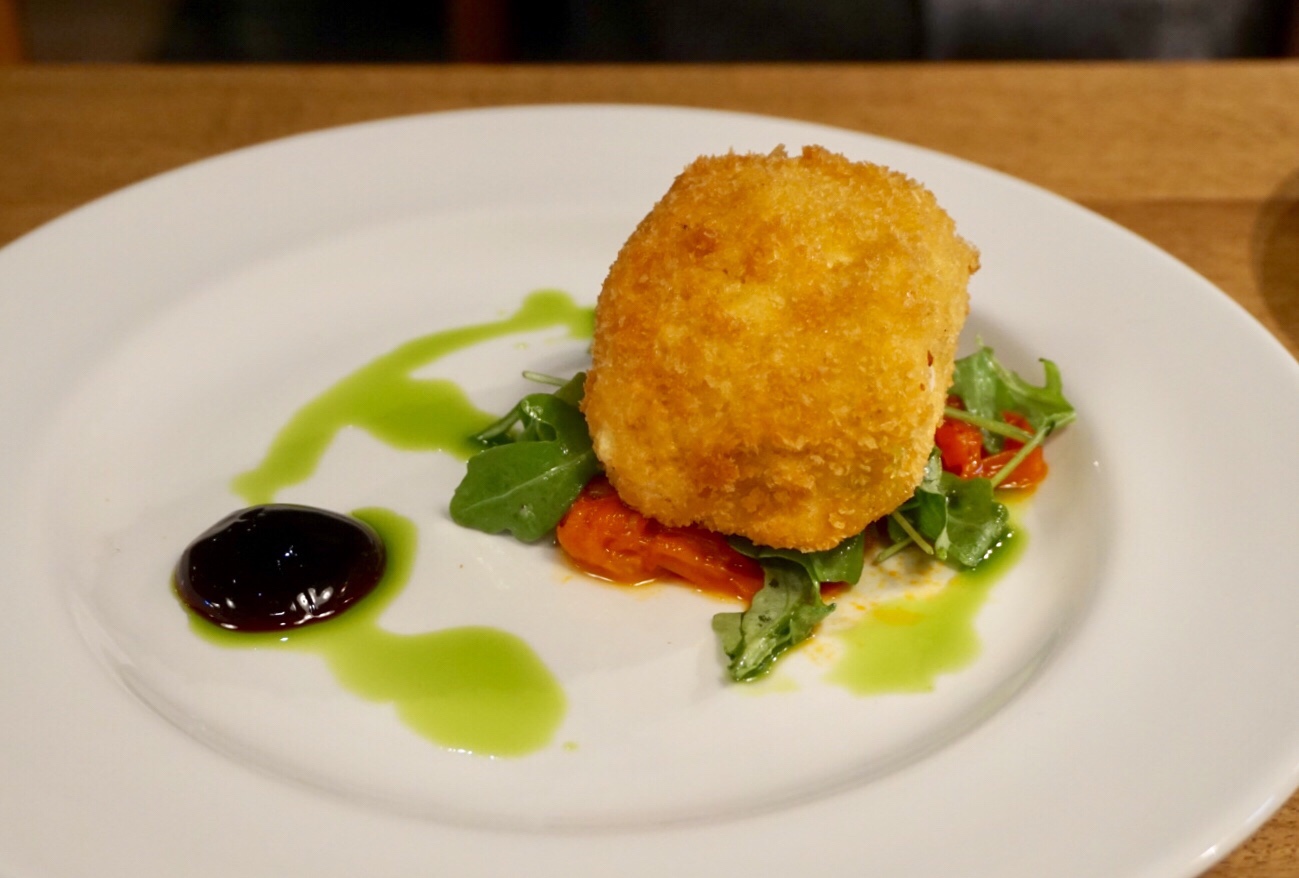 Mains on this visit took the shape of flatbreads. We couldn’t decide between the three, eventually ordering them all because we expected them to be small. They are not small. Blackened Brisket (£13) topped with moreish crispy onions smothered the first flatbread, the meat tender, succulent and gently spiced. This is a hefty portion that’s probably totally underpriced and I’m sure once they figure that out I’ll hate myself for mentioning it. The flatbread (as on all three variations) is light and pliable with occasional crisp, charred edges licked by heat. They’re more akin to thin naans, and ideal for folding and scooping. Special shout out for the pickled cabbage slaw that delivered some freshness to each flatbread; loved the pop from the sprinkle of mustard seeds. 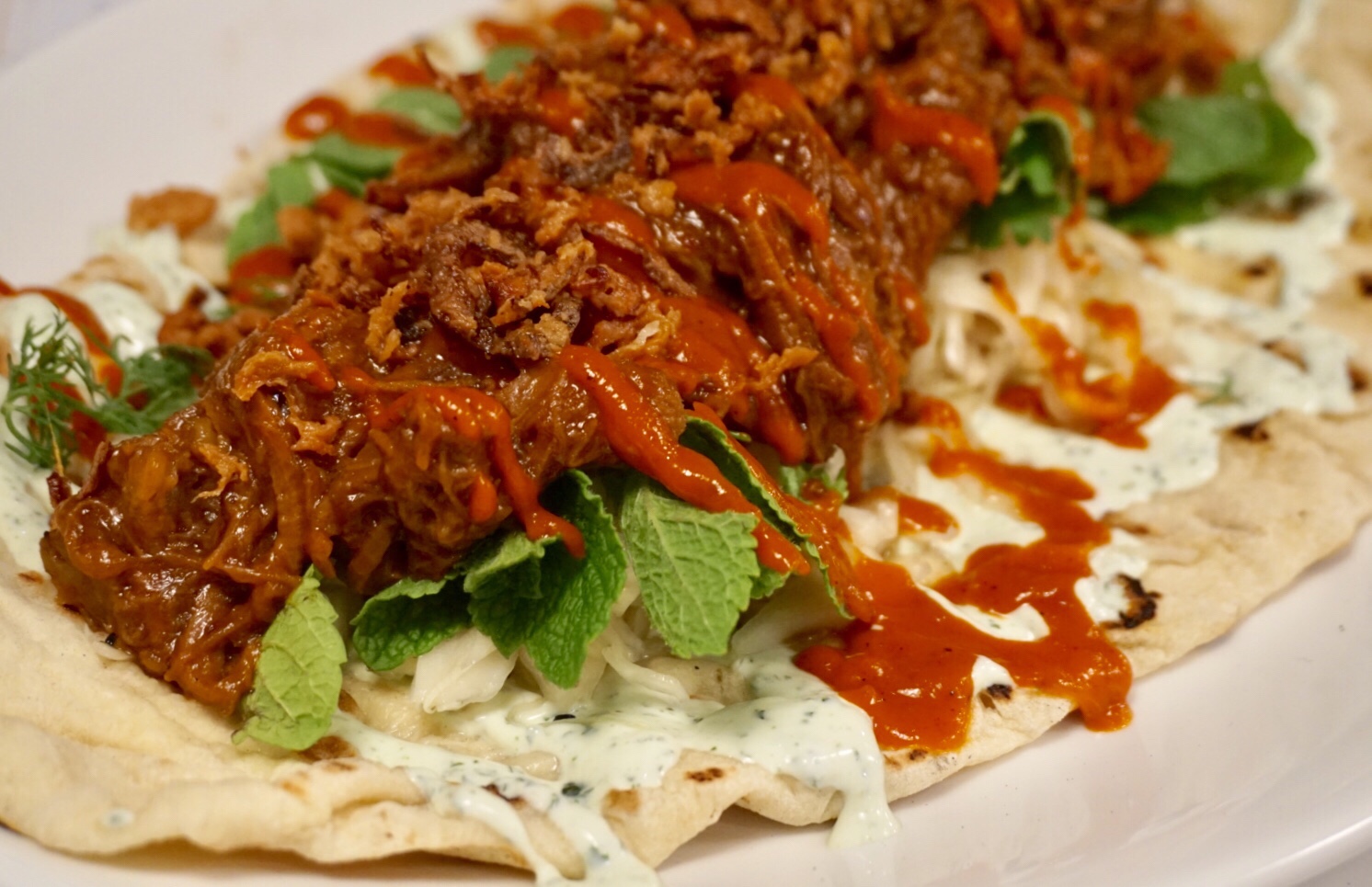 Tandoori Masala Chicken (£12) came recommended by Chef Mark; my limited experience of working in a kitchen told me not to argue. Another mountain of meat, the thick slabs of poultry tasted as good as anything similar I’ve had in local Indian restaurants – I can’t give a better complement than that really. Aromatic with punches of coriander, cumin and, I think, black pepper and cinnamon, this delivers a big smack round the gob flavour wise. I was less enthusiastic about the Panner and Leek (£11) incarnation. I can’t help but feel there’s less value in this dish when compared to the meaty alternatives, and the cubes of cheese (whilst rocking some lovely charred edges) didn’t pack a comparable flavour punch for me. 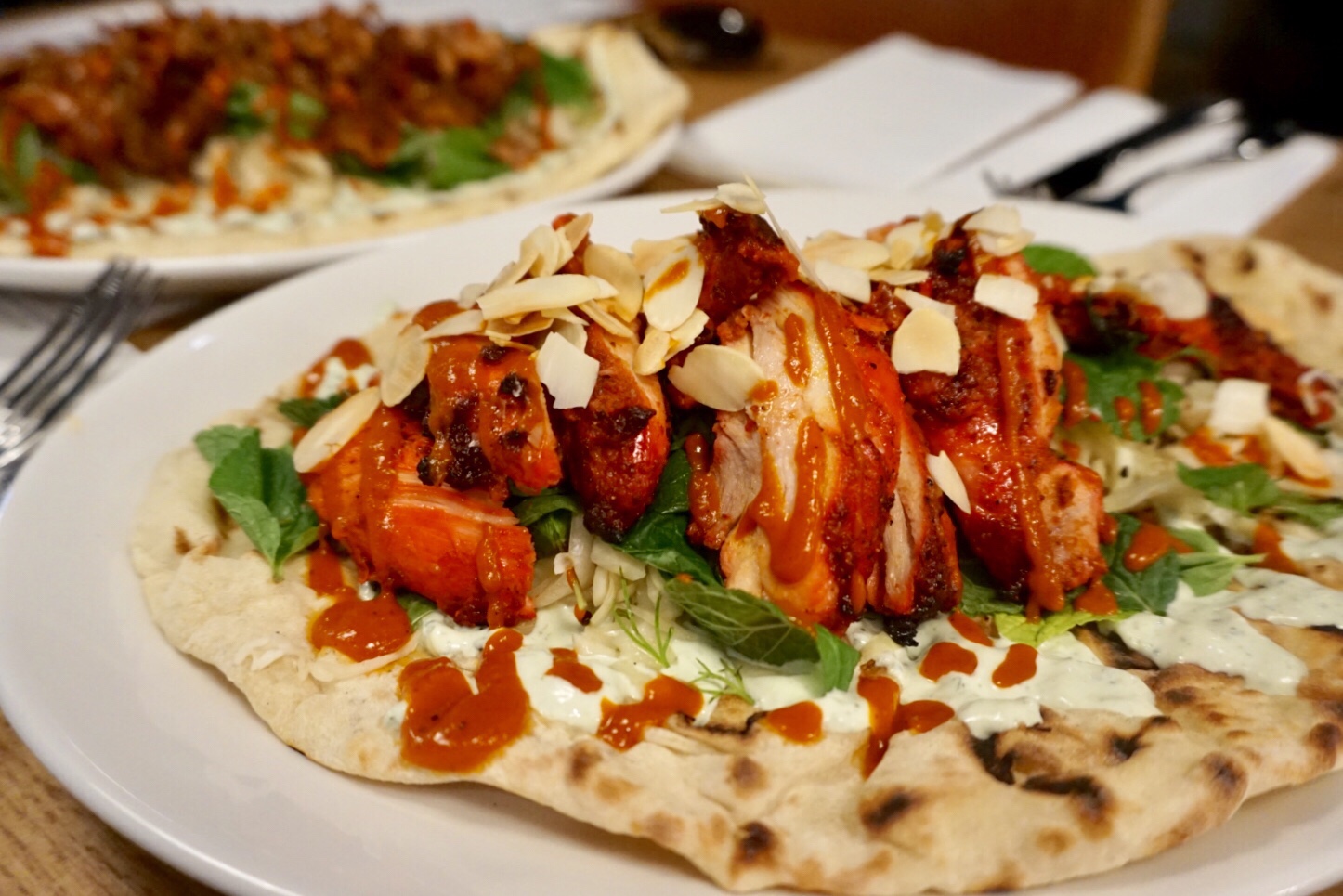 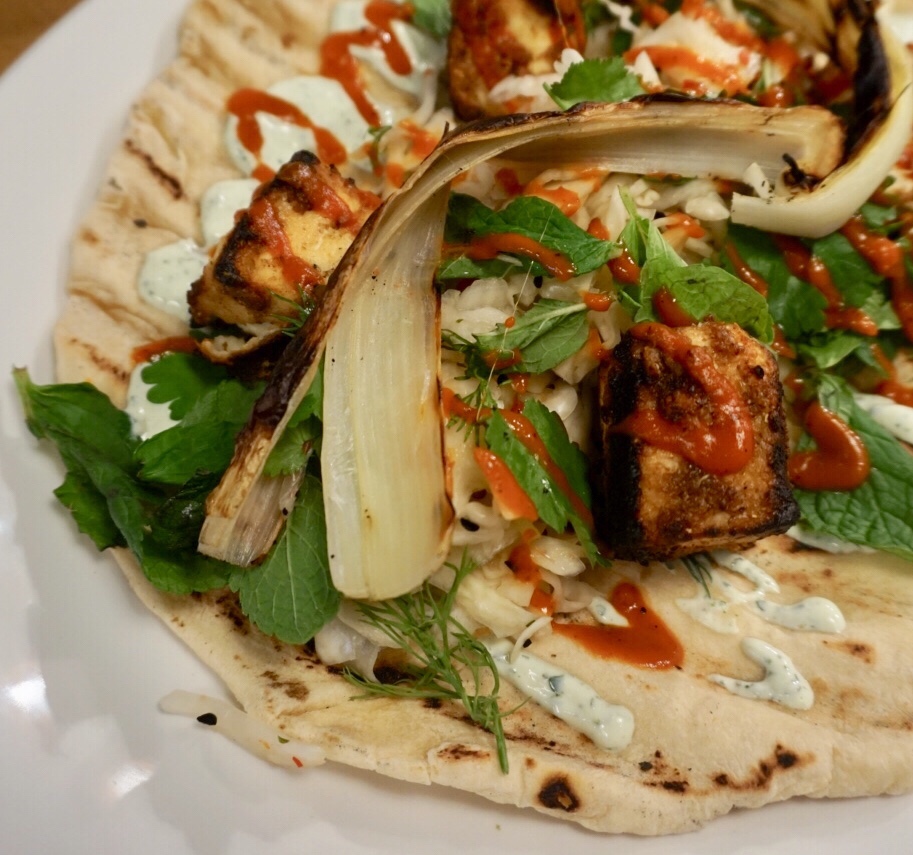 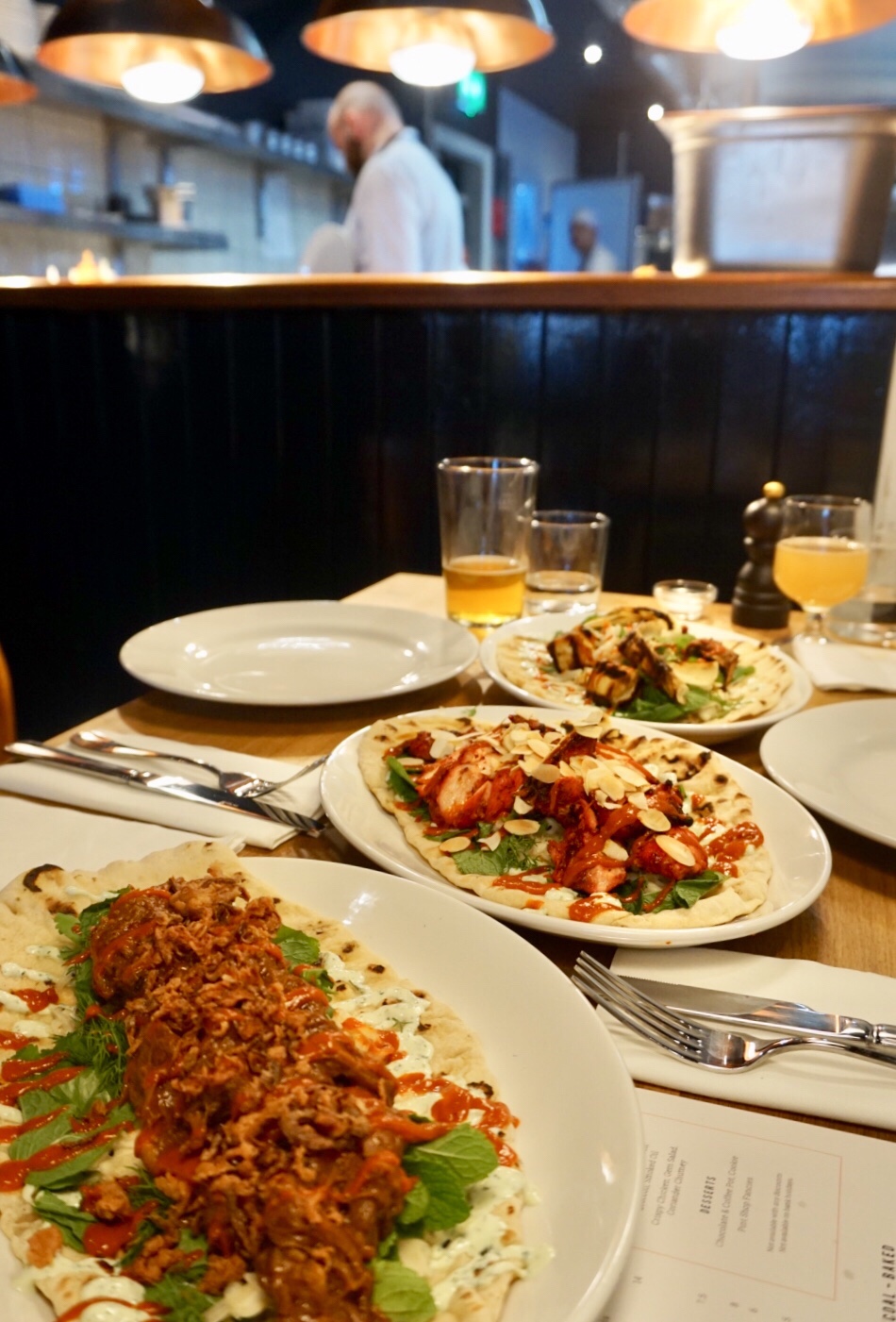 The menu is packed with other tasty treats including a ‘dirty’ burger, pork belly, and veggie options such as charred celeriac. Rumour has it (wink wink) the bar downstairs will soon have its own menu; a smaller selection with lots of hearty seasonal offerings. (And sausages.. I’d tell you more but I’d have to kill you).

This is the sort of place we should be championing, and demanding more like it. It’s of course got some settling in to do, and I have no doubt menu items will come and go (as long as it’s not that scotch egg, guys), but this Bennett’s Hill newbie has got a hell of a lot going for it. It’s starting out with impressively high standards in terms of the food and the staff, and if the team can keep all that up I have no doubt this place will do very, very well. Welcome, Pint Shop. You were worth the wait.

Disclosure: I dined during a soft launch service at a 50% reduced rate available for all diners who pre-booked. All views, opinions and photos are mine.

Wonder Woman 1984 is two and half hours long and so far the only things I’ve really enjoyed about it are Kristen Wiig’s studded leather jacket and the fact that Adam Klaus from Jonathan Creek has a bit part. The plot is moronic, the script is crap, and it’s dull. Total garbage.

Imagine assuming you can buy a woman’s Instagram account simply because you’re a man and you want it for yourself. Astounding.

Weather report: sunny but absolutely pissing freezing. Floor is a death trap. Wish I hadn’t bothered. But look how pretty she is.