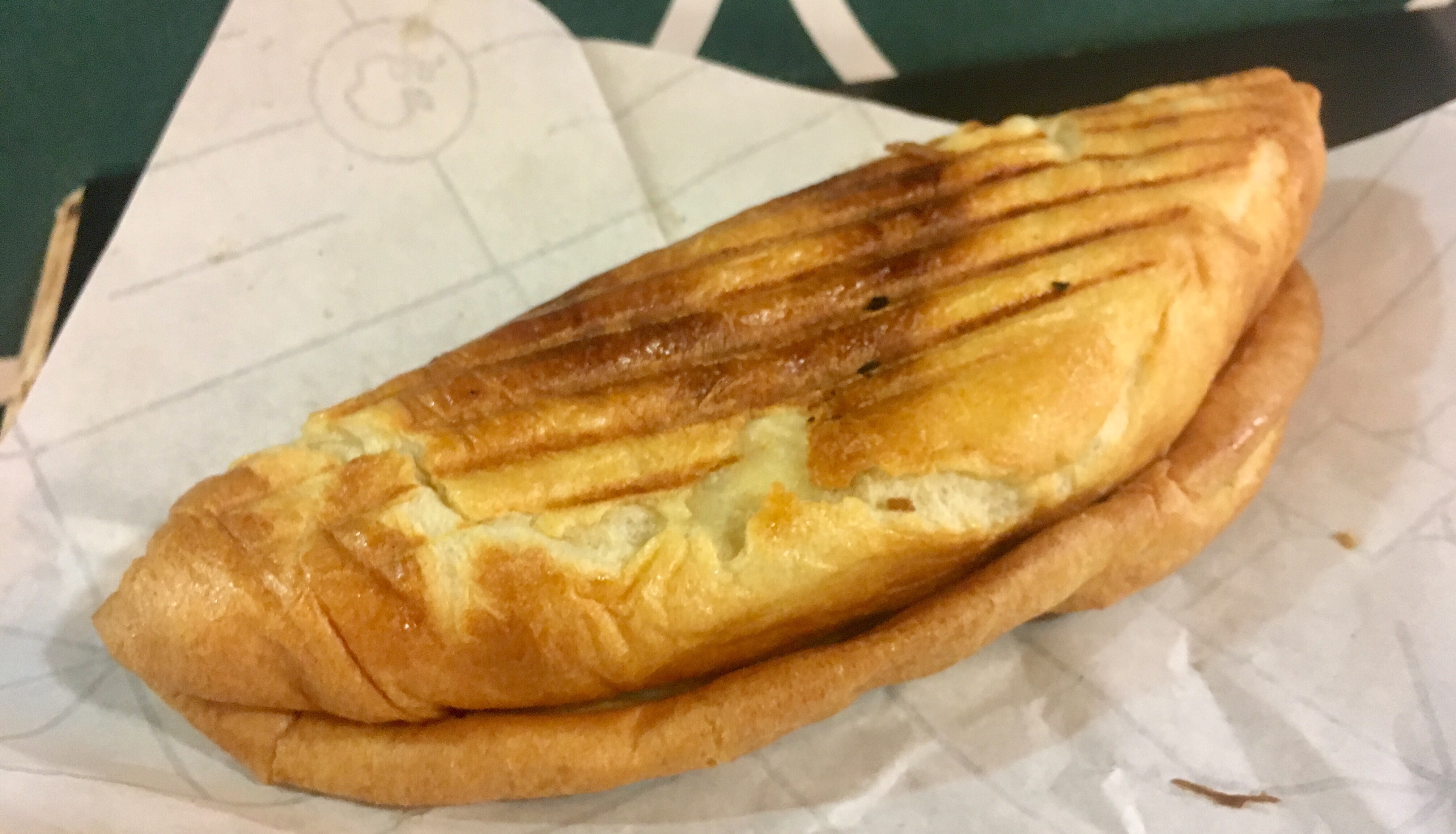 Pulling into New Street Station after a long meeting in a place I can’t pronounce, I was in a fairly bad state of hangry by the time I got to Pig and Apple.

People don’t like me when I’m hangry (a choice few don’t seem to like me regardless of my blood sugar levels) for good reason: I become a total cow. Stomping through Grand Central’s food court, to escape the seemingly endless lines of bumbling morons that make up rush hour down the escalators, I threw several children out of my way to get to the place I’d heard was selling Yorkshire pudding wraps. 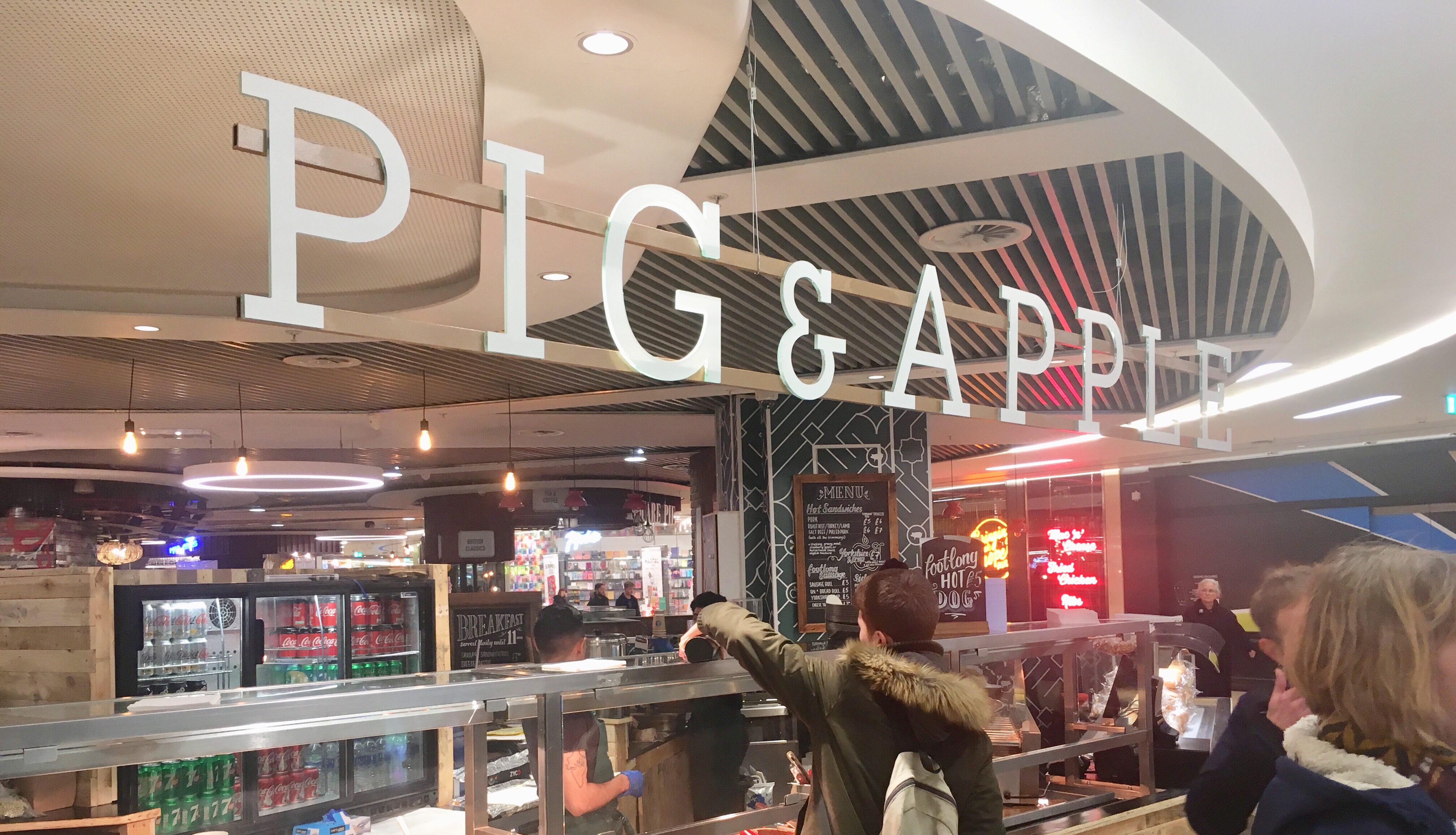 With a northern husband who probably loves gravy more than he will ever truly love me, I’d been quietly awaiting the Pig’s arrival. Admittedly before my first visit I had limited expectations; on the plus side I was ready to eat the guy taking my order. The menu at Pig and Apple is rightly concise and gets straight to the point. This place is for people that like meat, and unless you want a cheese toastie or a side salad the veggies and vegans amongst you aren’t getting shit. Sorry about that. There’s a selection of roasted and pulled meats served in rolls or baguettes, as well as footlong sausages and a handful of nibbles, but my sole goal was get my hands on one of the coveted Yorkshire pudding wraps I’d seen pop up sporadically on Twitter. 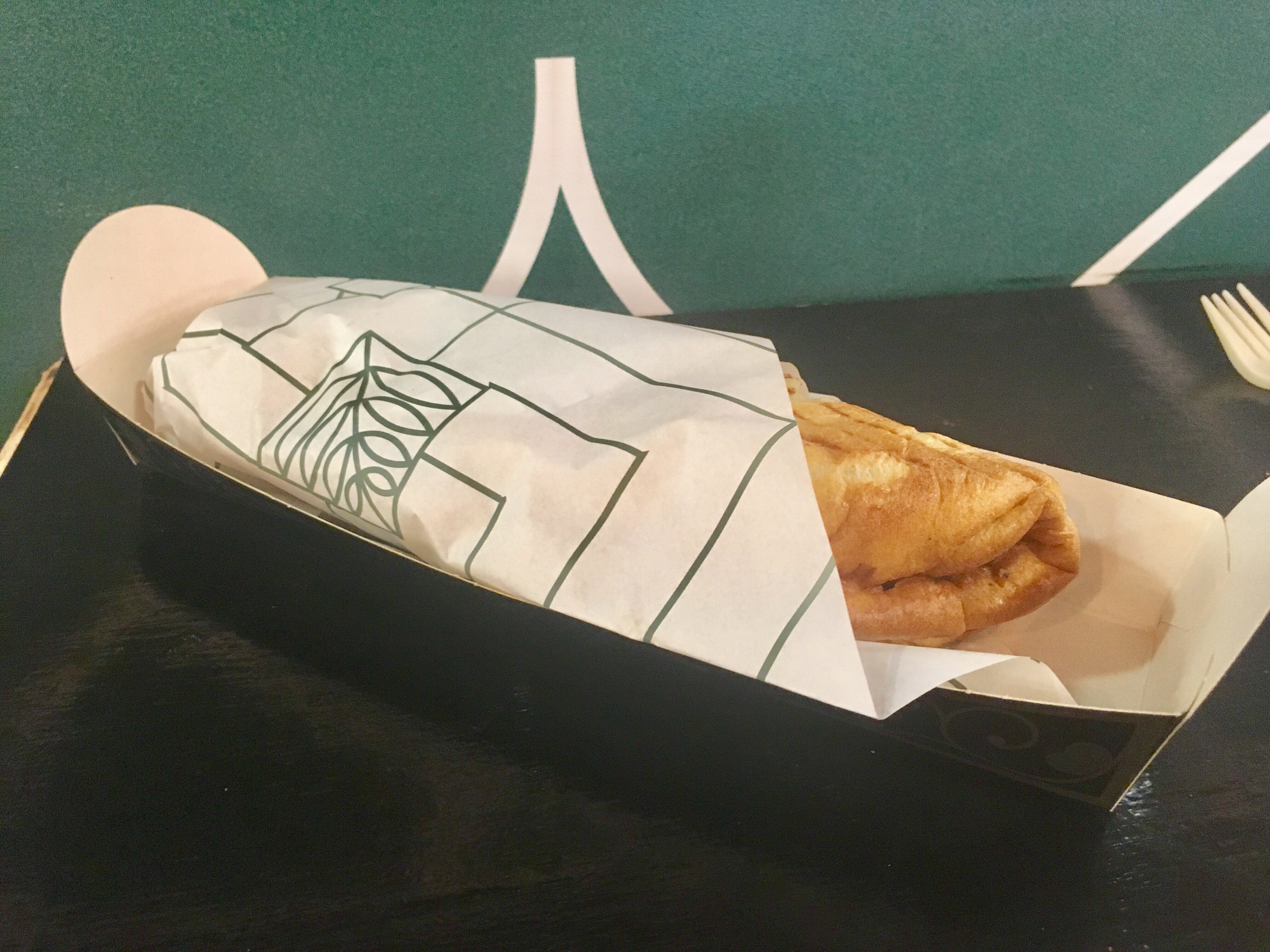 For £6 (add a quid if you want to combine meats) I was handed a fist full, having chosen the roast pork – because there was no beef available – with stuffing and gravy. Did it look like the most elegant meal in the world? Of course not – it’s a Yorkshire pudding wrap, you snowflakes. But the smells wafting from the branded wax paper wrapper made me happy. Inside the crispy yet vaguely chewy casing I found plenty of meat, coated in a dark emulsion of slightly salty gravy. 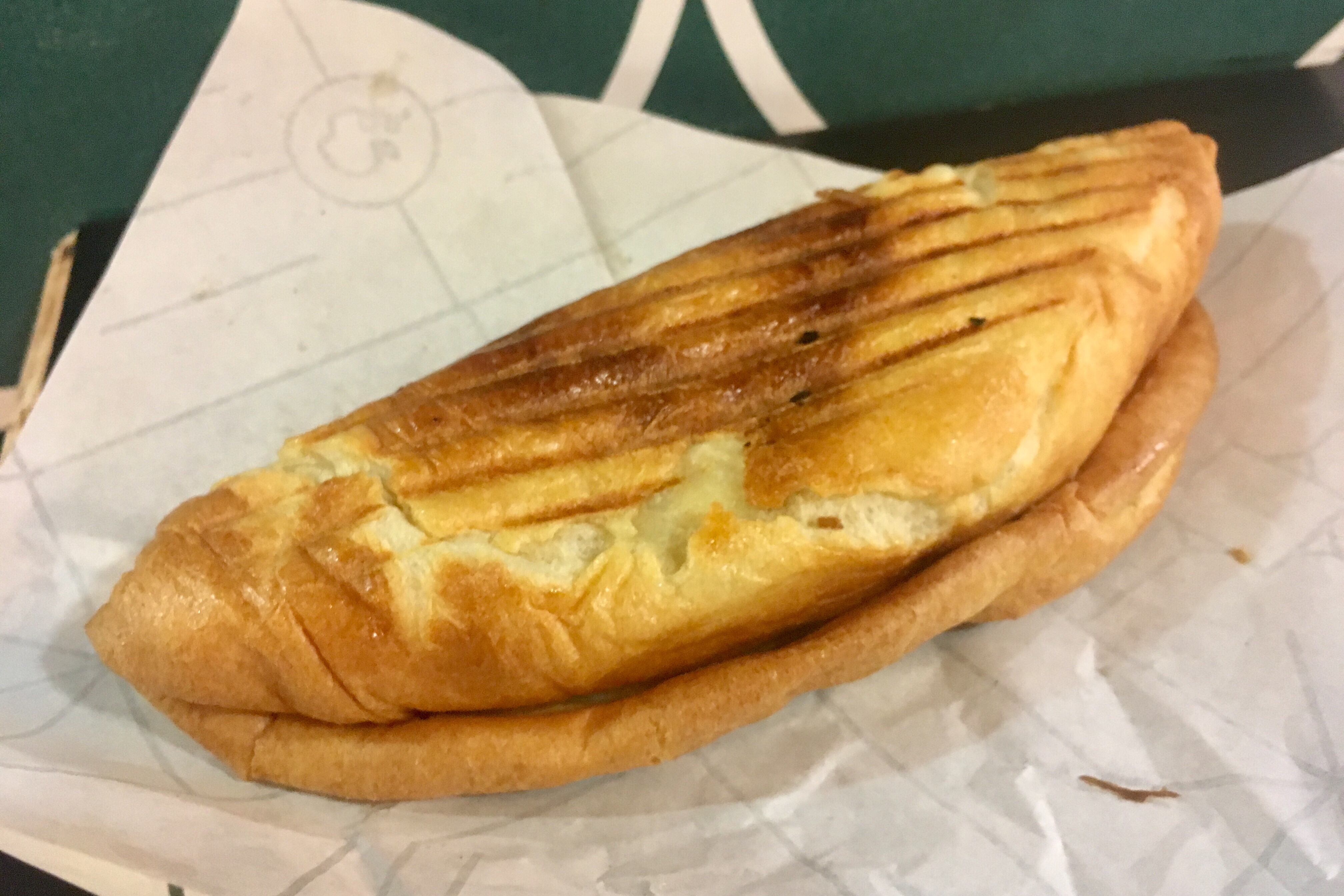 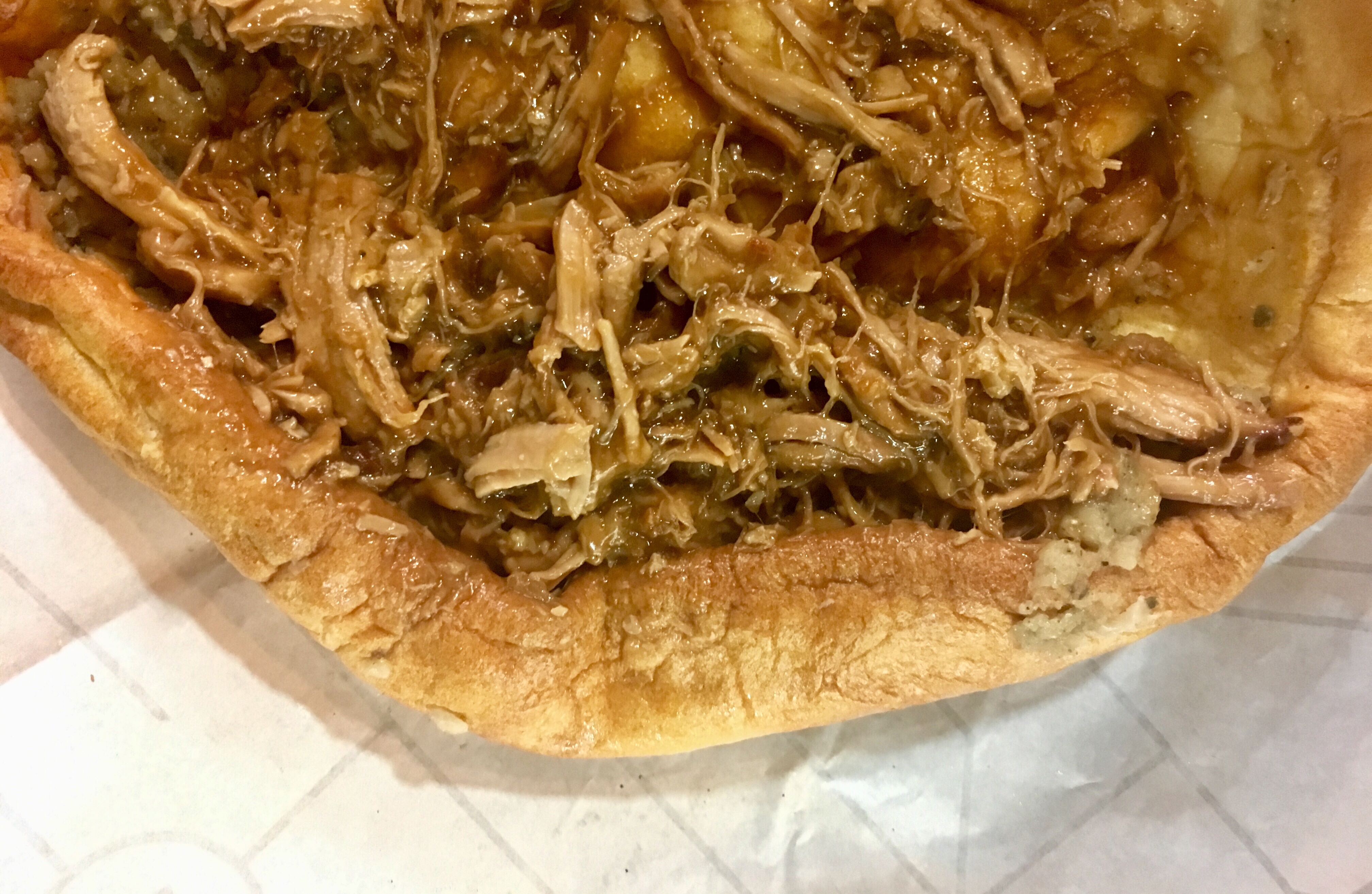 I appreciate the idea is to shove it all in your gob rather than pull it apart (it’s not very pretty) but for the purpose of this blog I felt it would be helpful to show the full story. The pork itself tasted fine; nothing outstanding but palatable. It reminded me of something similar I had at 2am whilst drunk at a festival, just slightly better dressed. Make of that what you will. I’m glad I avoided the rolls and baguettes which looked hideous – the bread looked cheap and nasty.

I didn’t bother ordering a tub of the roast spuds (£3) I clocked on the menu in the end because they looked a bit sad behind the glass. In fact, the whole prep area looked messy, it has to be said. I did however take a bag of the spicy pork scratchings (£2.50) to go before I left that was worth almost losing a molar for. Swings and roundabouts. 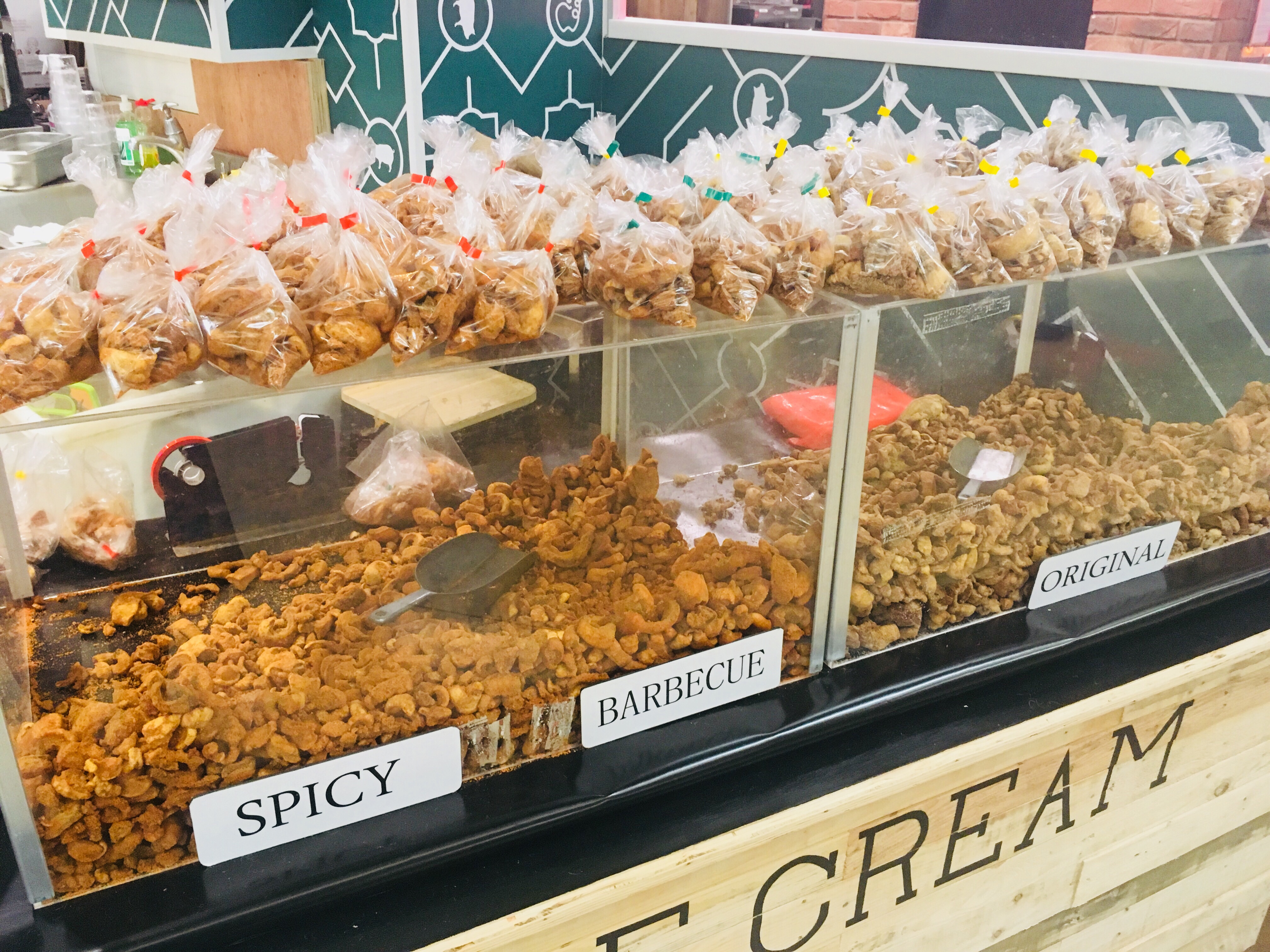 Considering the often underwhelming sit-down food offerings in Grand Central (I’m looking at you, Tasty Plaice) I was happy to take this beast to go at an undeniably low price but it felt like a canteen and looked pretty uninviting. There are a few chairs behind the stand if you want to sit to scoff. In hindsight, I was probably destined through sheer starvation to think the food here would be the stuff dreams are made of – let’s be realistic, this isn’t life changing. But on reflection I do still think I had a reasonable feed at low cost, and there’s much worse being sold for much more within yards of this place. 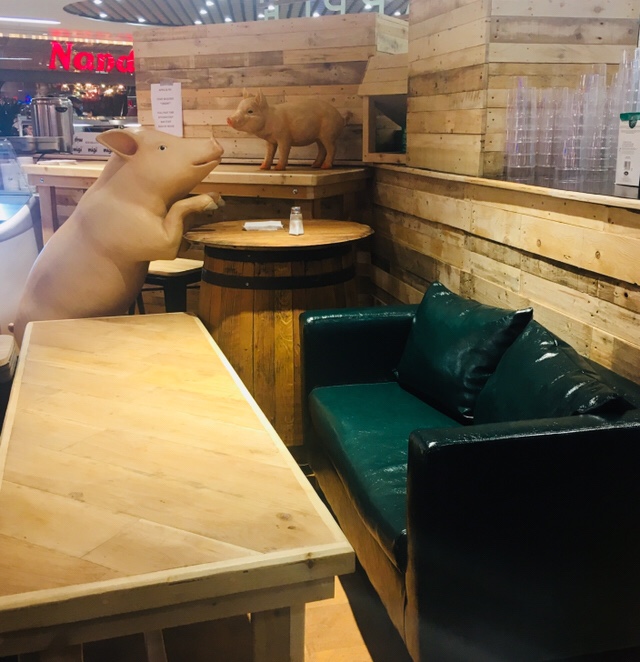 It would be fair to say the Pig and Apple team were having some teething problems in their first week open (there was no lamb or beef at all?!) so perhaps this wasn’t the ideal time to visit. As a rule I also think having a go at your staff while customers are sat within earshot is perhaps a bit of a manager fail. I wouldn’t go out of my way to come back for more (and it’s a shame you can see from the moment you step up to the counter that the Yorkies aren’t remotely homemade, coming directly from a plastic wrapper) but it’s an alright option for a cheap munch on the run.

I didn’t love it but I didn’t hate it, and if nothing else you could use one of these heavy wraps as a weapon; handy in the forthcoming Brexit Britain apocalypse and when the Christmas market hell mouth opens. Always thinking of you guys – you’re welcome.

Disclosure: I paid in full at Pig and Apple. All words, photos and opinions are mine.

If you would like to donate to us, you can do here https://www.gofundme.com/f/ukblm-fund?utm_source=customer&utm_medium=copy_link&utm_campaign=p_cf+share-flow-1