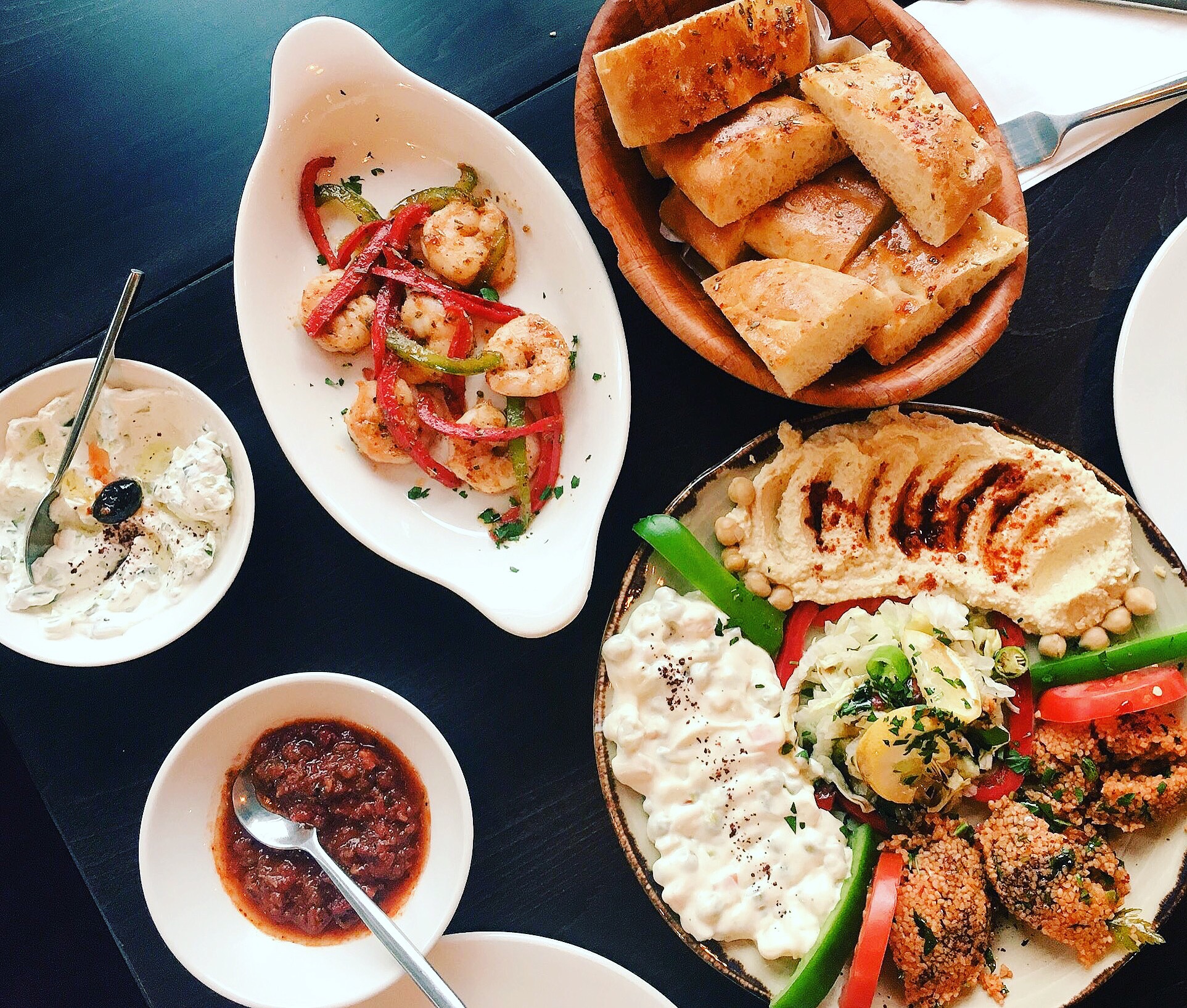 Did you know Cappadocia Jewellery Quarter is a semi-arid region of Turkey known for its Bronze Age homes carved into valley walls and caves by troglodytes? No? Well, me neither to be fair, but it’s always nice to learn something new.

Luckily the Brum restaurant of the same name isn’t found in a dusty cave but on Frederick Street in the heart of the Jewellery Quarter.

Despite being quite sizeable, with the whitewashed exterior walls and brown signage outside you could be forgiven for walking past this restaurant without giving it much thought, however inside lies a modern Turkish bistro. Even though the decor is heavy on darker colours, which includes walnut furniture and plenty of black on the walls, Cappadocia manages to be inviting and airy. This is helped by the huge high windows which run across the front of the whole restaurant; perfect for summertime people watching.

The ceiling is littered with modern light fittings which give the restaurant a contemporary feel, and there’s a variety of table options including large booths ideal for group dining and intimate tables for two. (Note: I wouldn’t say it felt particularly authentic to its region of influence, but Damascena has that covered if you’re after that kind of vibe).

We arrived at 6:45 at the start of dinner service on a Friday night, and were greeted by a friendly chap called Kemal who seated us and talked through the menu and specials. With a large choice of hot or cold starters as well as the mains to mull over, we were immediately spoilt for choice so I asked our server for his suggestions. I love this kind of food (although my waistline would disagree) and would’ve happily eaten just about all of it.

Thankfully Kemal pointed out some of the popular traditional plates on the menu, including Sucuk and Hellim (spicy beef sausage with grilled Cypriot cheese), before we made our choices. I chose the Garlic King Prawns from the hot starters section and followed Kemal’s suggestion to try the Cold Mezze for two.

Our starters arrived 20 minutes later and first impressions were good. A large platter of inviting treats was delivered first, followed by a bread basket and several extra dips, and finally the warm prawns. Perfectly cooked and combining both a hum of garlic and mild earthy spices, this was a flavoursome warm starter and, happily, came as a healthy portion.

The mystery mezze – the Chef picks the 3 choices – included Hummus (chickpeas blitzed with tahini, garlic, lemon and paprika), Rus Salatasi (carrots, peas, egg, and gherkins mixed in a creamy dressing) and Kisir (couscous, spring onions, mint and parsley, seasoned with a pomegranate coulis) which gave us plenty of choice. The hummus ticked all the flavour boxes one would hope, especially with the additional sprinkling of smoked paprika, and had a smooth texture.

The couscous had a subtle tomato flavour and the additional pomegranate gave the grains an occasional burst of sweetness. The Rus Salatasi was too heavy on the mayonnaise for me and lacking the depth of flavour I expected; the Baba Ghanoush would perhaps have been a more welcome third addition.

For me the hummus was the standout element of the mezze, and my partner – who notoriously dislikes blended dips like this – made a point of telling Kemal how much he enjoyed it; I’d take it as a given this is some bloody good hummus. The additional Cacik – a blend of cucumber, dill, garlic, olive oil and creamy yoghurt – was an unexpected but welcome change in flavour, with a dreamy consistency.

The thick yoghurt dip was seasoned well and tasted divine when scooped on to the crispy wedges of warm flatbread. For just under £10 (minus the prawns) the cold mezze is a well priced and generous starter for two.

For the main event we chose to share the Chef’s Special which (for £30) included pieces of both lamb shish and chicken shish, Adana kofte, chicken wings and lamb ribs – all cooked on a charcoal grill. Served with both rice and bulgur plus two side salads, this seemed like a great option for us as we could sample more of the meaty treats on offer.

A large plate arrived piled high with sizeable chunks of meat sitting on a bed of fluffy rice and sunshine grains. A bountiful platter for two, there was a decent amount of both meat and rice, and the additional chargrilled green chillies were an added bonus. It was a shame the kebab items didn’t come out still on their skewers for authenticity, but that’s a minor gripe.

I plated myself a piece of each of the meats to try, first up grabbing a chunk of lamb shish. Tender and juicy, the lamb was naturally tasty and melted in the mouth. My pet peev is fatty lamb but this was anything but; the quality of the meat used was clear. Next up was the chicken shish which, again, was succulent and juicy. There was a subtle hint of warm spice which suggested, unlike the lamb, it had been marinated before being grilled; this was later confirmed by Kemal. Two great examples of shish which had contrasting flavours ensuring maximum happy noises.

The lamb kofte was a more rustic affair, with a coarse texture and robust flavour. Flecks of red chilli and parsley peered out from the hearty lamb mince, cooked just enough to still be juicy; the surprise hit of the platter for both of us.

The wings and ribs gave the hearty platter some variation, despite also being grilled on the charcoal, and Ian noted the lamb ribs to be his favourite part of the meal. I personally prefer less bone and more meat, making the lamb shish my personal highlight.

Finally we were treated to some traditional Baklava for dessert, which arrived served with a scoop of vanilla ice cream. Four neat parcels of buttery, flakey pastry packed full of crushed pistachios with a hint of honey; I could have eaten forty of them, not four. Delicious, and some of the best baklava I’ve personally eaten outside of my previous holiday destinations.

I had fairly limited expectations of Cappadocia it has to be said (largely because of getting confused between the old and new websites) but what I found was authentic, hearty food and a contemporary Turkish dining experience. An enjoyable evening from a food perspective, and a nice restaurant.

If you want a more traditional ‘themed’ middle eastern dining experience I’d maybe try somewhere else, but this modern Turkish eatery – and its polite, helpful workforce – deserves props. Kemal was one of three members of staff we met that night, and I must say they go above and beyond to be polite and attentive. From placing your napkin to cleaning the table between courses, they really do try to give customers a higher level of service that unequivocally makes you feel special. Knowledgable and welcoming, they deserve credit for being part of the overall positive experience.

The menu has apparently had a bit of a makeover recently to include more Turkish-inspired dishes – you can view it here. Starters average around £5-£8 and mains around £12-£15. There are also plenty of veggie options, and I’m told the lunch menu is ideal if you’d prefer a more ‘tapas style’ meal. Our server also revealed a brunch menu – available Saturday and Sunday – has now been launched, which I’m certainly keen to check out.

It’s also in a great central JQ location (just 30 seconds walk from the clock tower) so if you’re out and about around there drop in for a tasty bite. There’s a decent selection of beers you might not expect, such as Leffe, and a new wine menu is due to launch soon. You heard it here first high five

Have you eaten at Cappadocia Jewellery Quarter? Do you rate the food? Let me know in the comments.

Disclaimer: I paid in full and all opinions, words and photos are my own