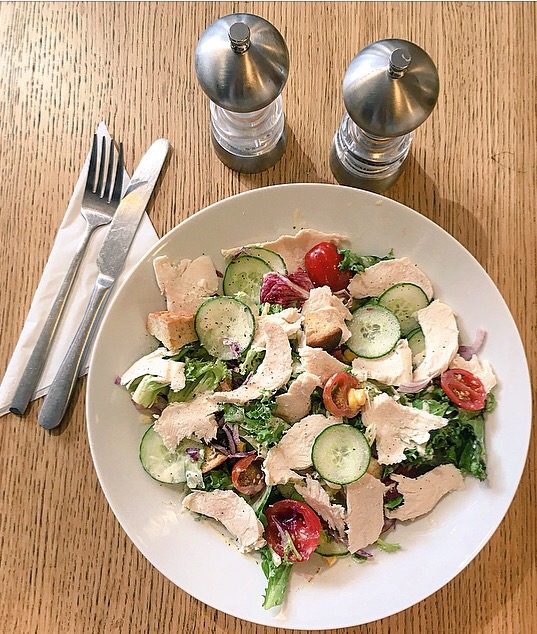 I’ve loved the Jewellery Quarter since my days in marketing when I first left university and moved to this wonderful city.

There’s quite a vibrant food and drink scene now compared to when I worked in The Big Peg many moons ago, and I’ve recently decided to make more effort to venture over this side of town. Like many of us I have a few go-to spots in JQ but, in the pursuit of trying new things, last week I decided to branch out and try a new cafe: Coffee Tales Jewellery Quarter.

Situated on Warstone Lane in the midst of a host of (unsurprisingly) jewellery shops, Coffee Tales is a bright and airy cafe offering breakfast and lunch as well as hot and cold drinks. There’s also a counter buldging with cakes, bakes, cookies and unknown slabs of sugary gorgeousness.

Unfortunately, I’m upping my healthy food intake where possible at the moment due to my impending Vegas wedding (lol at self) and I actually chose Coffee Tales as I’d been told by a pal it offered lots of healthier lunch options. Essentially I made sexy eyes at the sweet treats and then ordered a salad; that’s willpower, that is. As well as healthier brunch options such as scrambled eggs, and avo toast, the menu also includedsweet and savoury pancakes, artisan bread sandwiches, and jacket spuds.

Being the virtuous saint I am (lol at self again) I managed to resist the tempting call of the potato and ordered the Roast Chicken Salad (£5.50) and a Diet Coke. For such a low price I wasn’t really expecting much but when the bowl arrived 10 minutes after I sat down I was pleasantly surprised. Brimming with mixed lettuce, cucumber, tomatoes and sweetcorn, the salad topping was plentiful. A hearty bowl of food – as hearty as a summer salad can ever be – a herby dressing lightly coated the ingredients, and the occasional additional homemade olive oil crouton gave the salad some extra interest.

I’m definitely going to come back to Coffee Tales again as I’d really like to try the all day breakfasts I saw others tucking in to, and the staff are delightful which makes a repeat visit more than likely. It’s a small but perfectly formed spot nestled right in the centre of JQ with basic but well executed food.

Most dishes also cost under £6 which makes it an affordable breakfast, brunch or lunch option too; worth a pit stop if you’re in the area for sure.

Have you tried the food at Coffee Tales Jewellery Quarter? Let me know in the comments.

Disclosure: I paid for this meal in full and did not tell anyone I was a blogger. All views and photos are my own