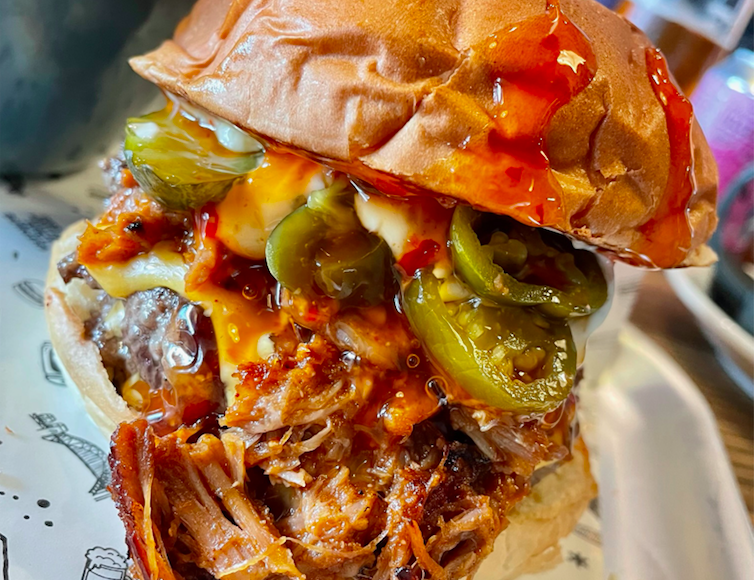 *This meal was paid in part with credit*

I have a bit of a love/hate relationship with Bennetts Hill.

Over the years there’s been some great places turn to shit and some shit places become brilliant things. My first date with my now husband (don’t ahhhh, we got hammered) was at Sun on the Hill; when the walls were adorned with bright comic-inspired art and they had open mic nights. It’s now a fairly soulless pub inhabited by football fans who can’t hold their lager. On the other hand, we now have the likes of Rudy’s Pizza in what was a lacklustre tapas place, and over the last 5 years or so it’s become one of the more bustling inner city streets for a good time. Sure there’s a few duds (I still don’t understand what Nude is trying to be and miss its predecessor, Pint Shop, with every fibre of my being) but overall there’s lots to like about BennyHill, and I can see why folks from further afield are looking to join the growing food and drink scene there. 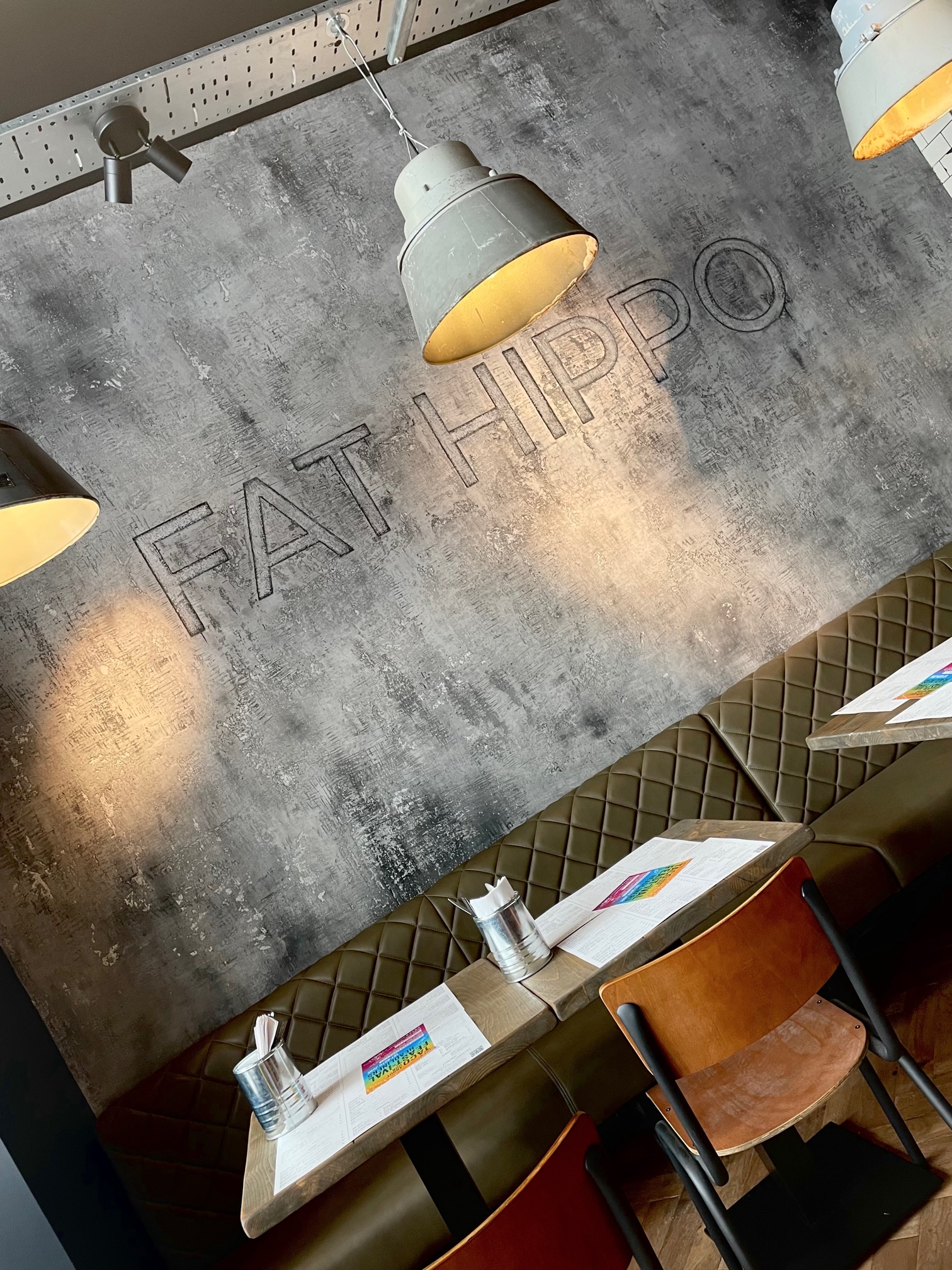 The venue that northern-born Fat Hippo has taken residency in has never been one of my favourites and it’s had an unsettled past. Previously a pretty unmemorable bar and BBQ joint, it’s most recent incarnation was a fish and chip set up that never had any haddock and apparently not enough customers to keep it going for more than 6 months. It wasn’t that the food was bad (I tried it a few times) it just didn’t seem to take off; perhaps not the right fit for what that street has become. This new burger joint, however, feels right at home half way up the hill I once enjoyed a cigarette with a man dressed as a human sized condom. But that’s a story for another day. Inside is industrial with muted tones and enough lights hanging from the ceiling to help you believe the cost of living crisis isn’t real after all. 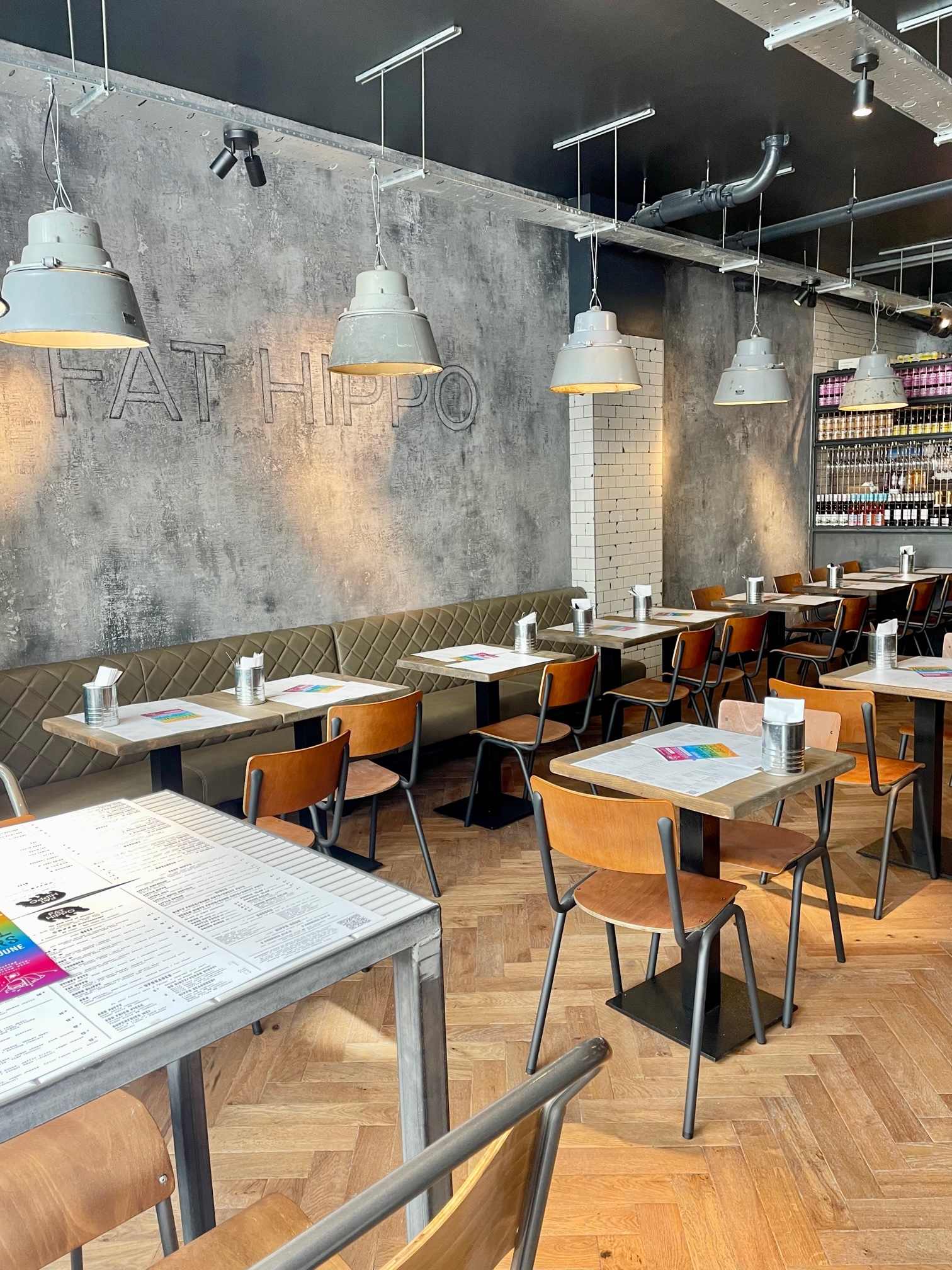 We visit on opening day (I booked a table 2 weeks ago for me and Ian like the good little fatty I am) and during a quiet Friday afternoon slot. I’d heard these guys were slinging good burgers in Nottingham and beyond so was keen to get in early doors – that and I had a feeling after the Crazy Pedros launch I’d need hangover fuel. I was not wrong.

The menu is big. Maybe too big, if there’s such a thing in the land of junk food. But there’s shed loads of choice and both beef and chicken lovers have something to enjoy here. Hell, you can even combine cows and chickens to form a super meat patty party if you like. Veggies and vegans can also eat well here and much can be swapped to accommodate. Prices may seem a little high on first glance but that’s countered by the fries included with each burger. The menu becomes a bit complicated with all the upgrades and add ons you can pick from but staff (insanely nice human beings) are happy to explain it all and I can appreciate the variety that all adds for guests. 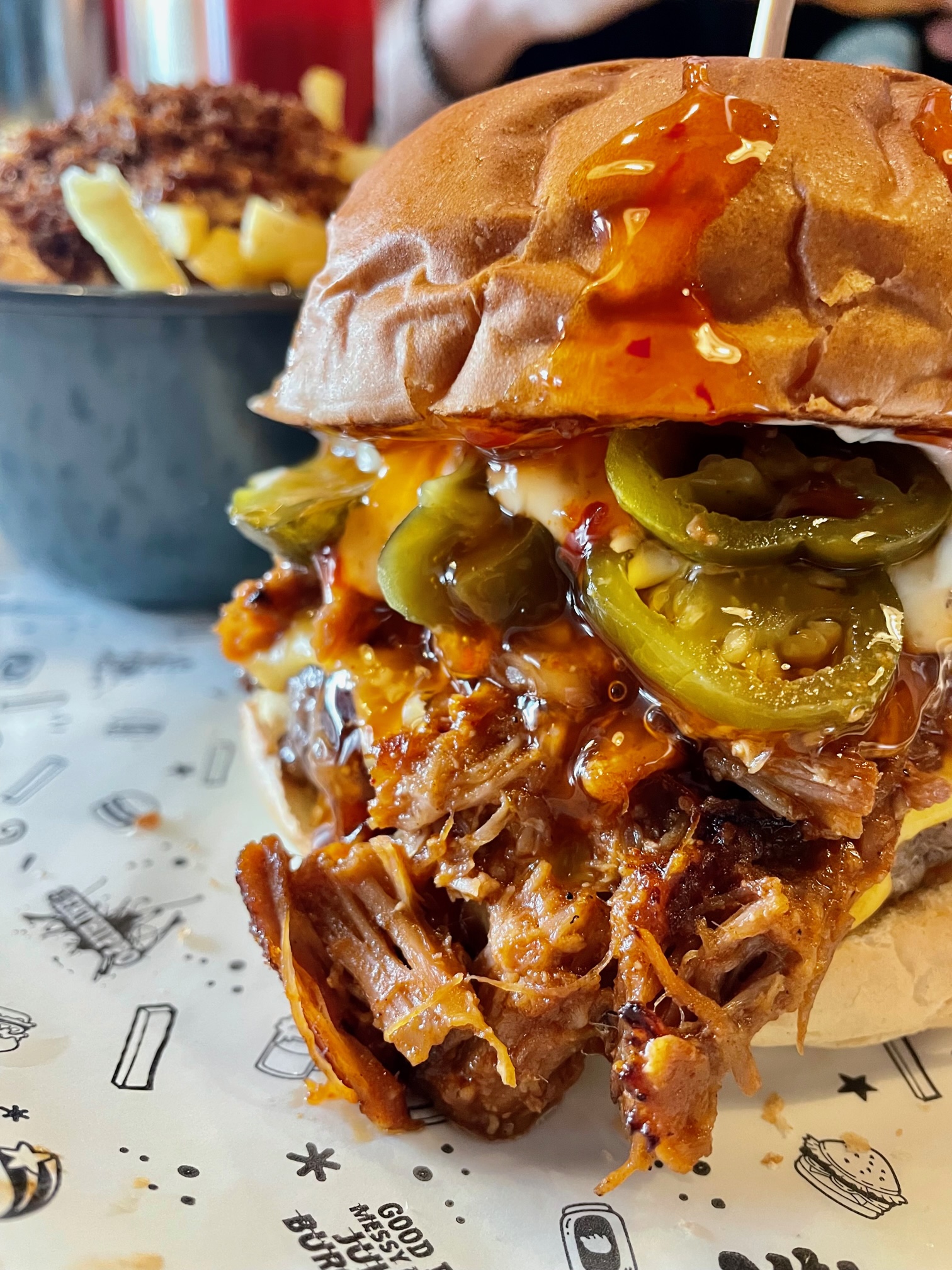 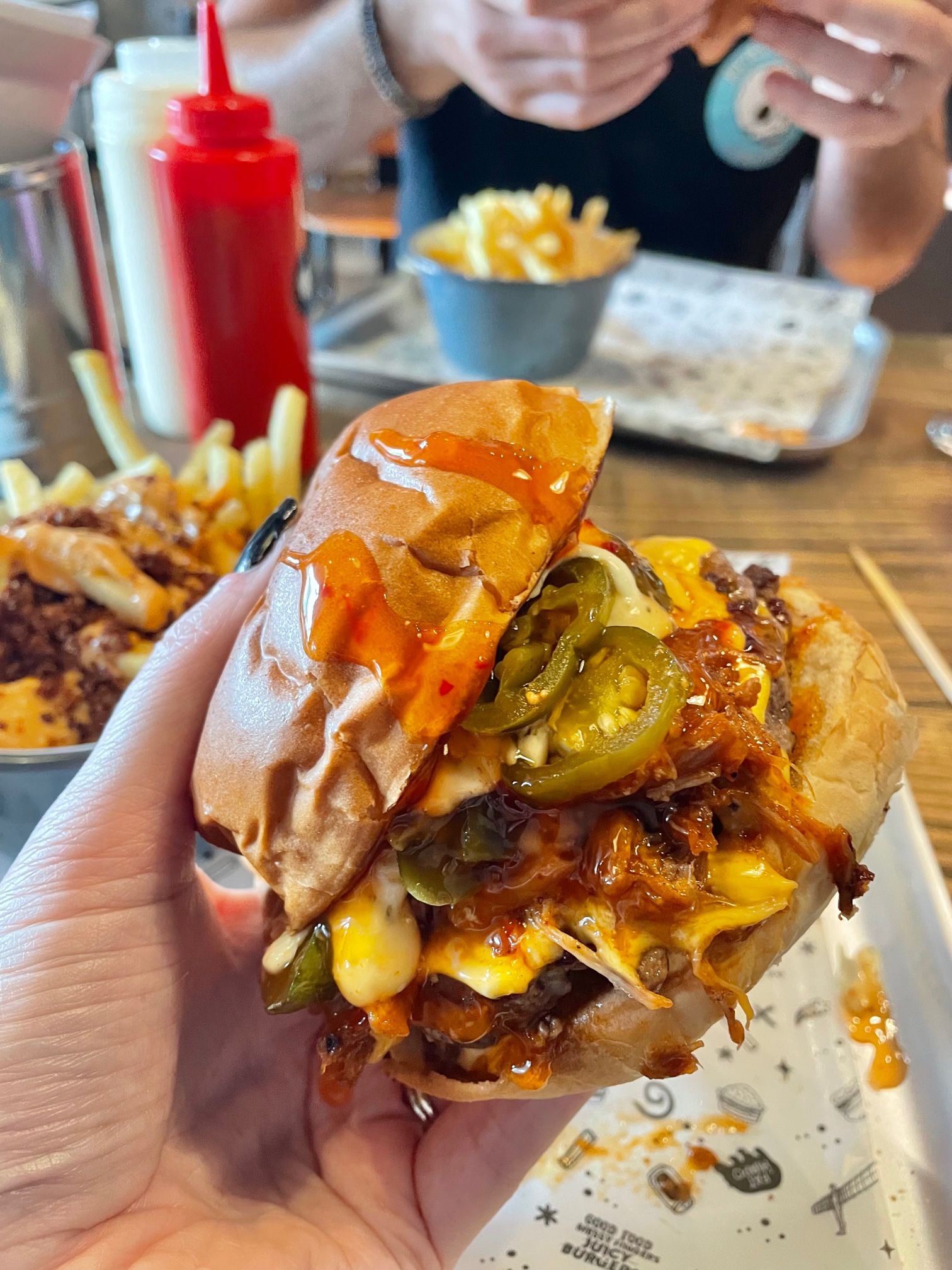 Let’s talk burgers. They’re serviceable – definitely more for those that like them loaded rather than simple. There’s not really any ‘classic’ burgers on the menu and they all come stacked with toppings, but for a brand that has the word gluttony in their Instagram bio I really doubt that was the goal anyway. As the Geordie lass serving us says before gently mocking my inability to finish my chips: “This was born in Newcastle – we don’t do small portions.”

I like the double 4oz patty as a change from the usual 8oz and there was just enough pink running through mine to make me happy. While the husband snaffles the Fat Hippo, I divert last minute from the truffle mayo tart I’d had my eye on to the Born Slippy. Loaded with tender pork rib meat (that stuff is straight up delicious) it’s quite a unit and enjoyable, aside from the chilli ‘jam’ that’s more like a thin sweet sauce and went absolutely everywhere including my hair. The buns hold up well and don’t fall apart, unlike me on the hangover that brought me here. Result. 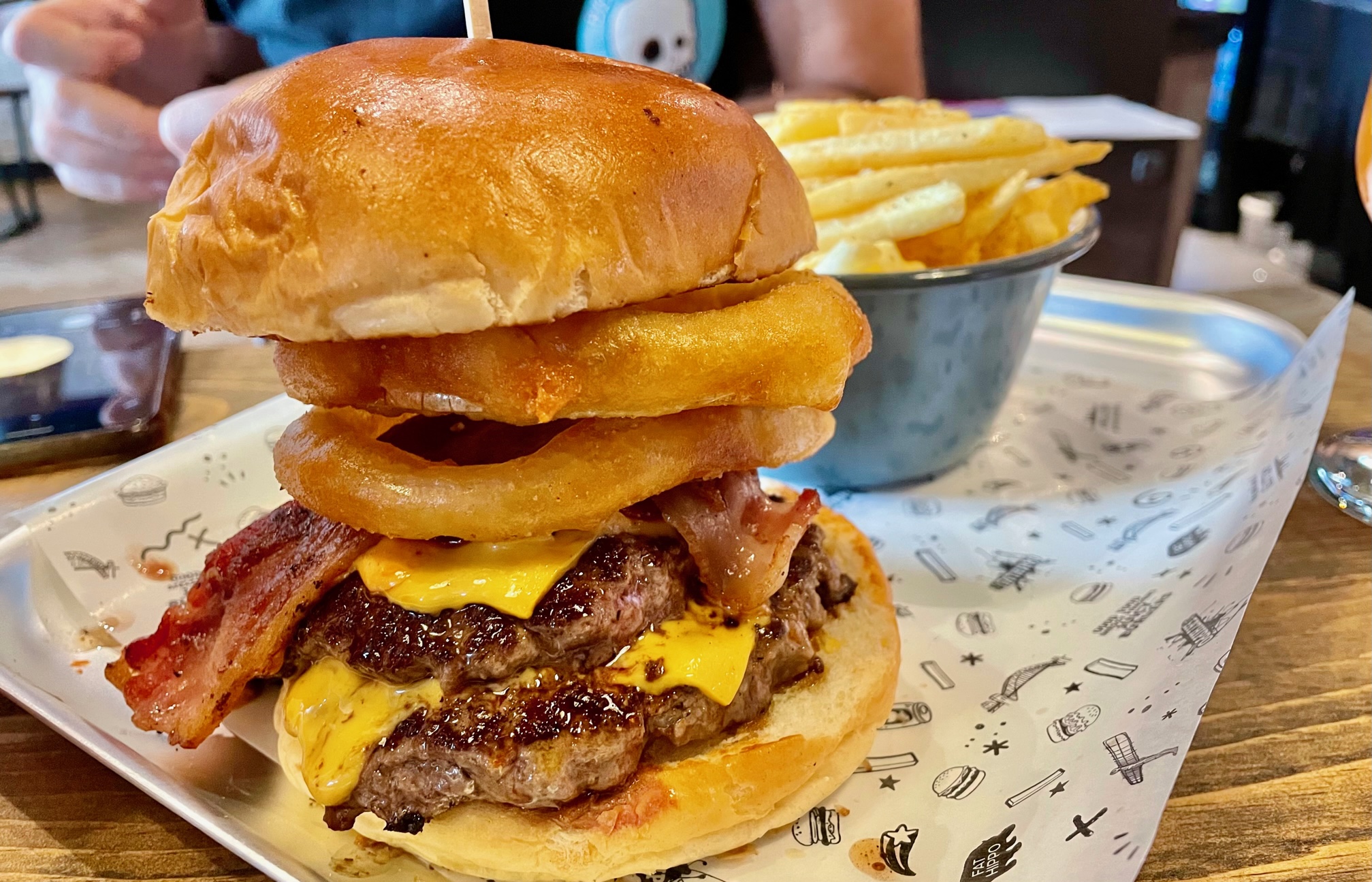 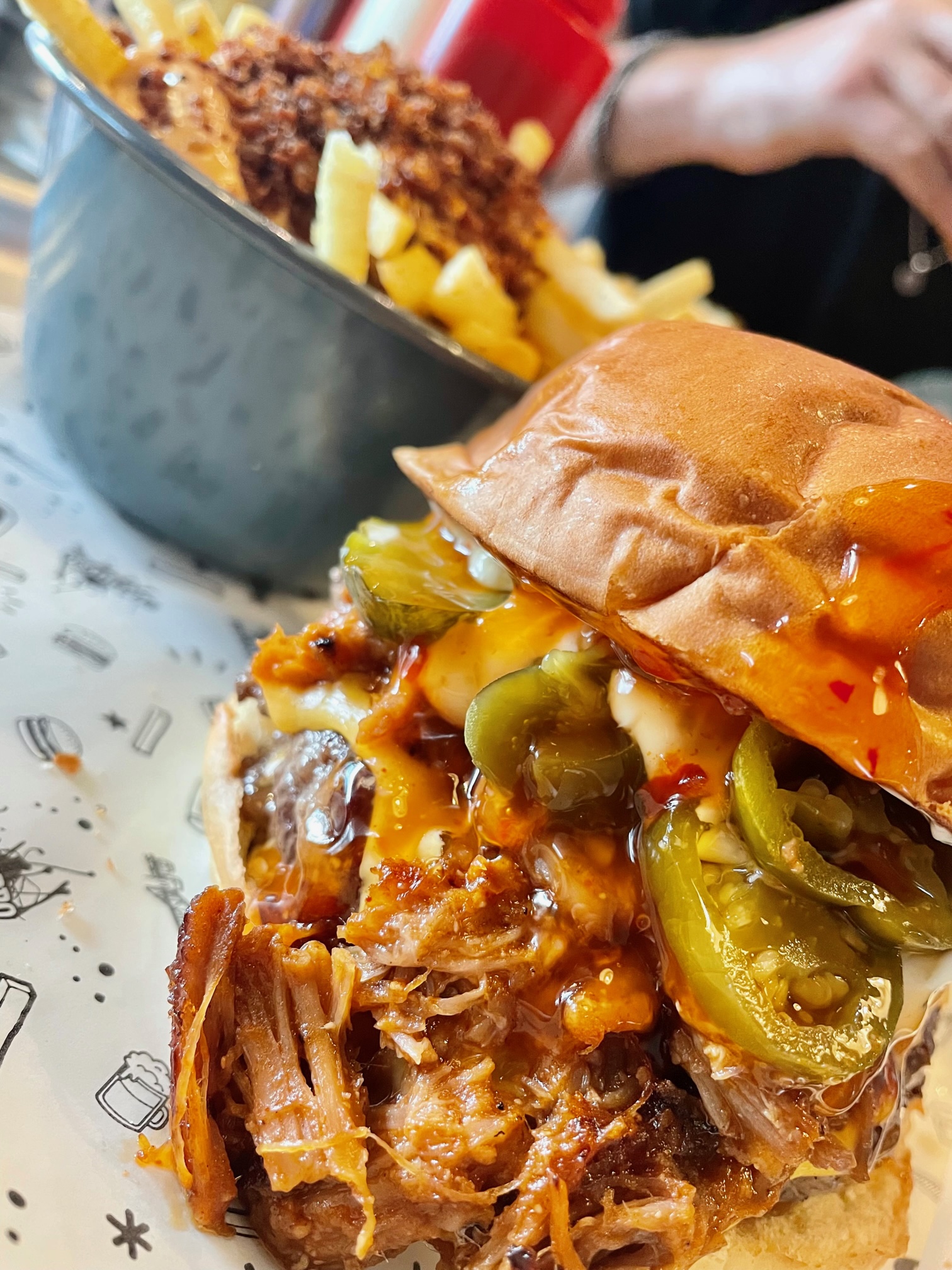 My fries are upgraded to be ‘dirty’ which upon asking means covered in Hippo Sauce (like burger sauce) with bacon bits and not the type of photos Nadine Dorries sends BoJo. Thank god. Sides include various fried things and you’ll find cocktails like boozy slushes, plus thick shakes that will absolutely not make you skinny but could possibly make you feel like Uma Thurman in Pulp Fiction. Minus all the heroin, obviously. 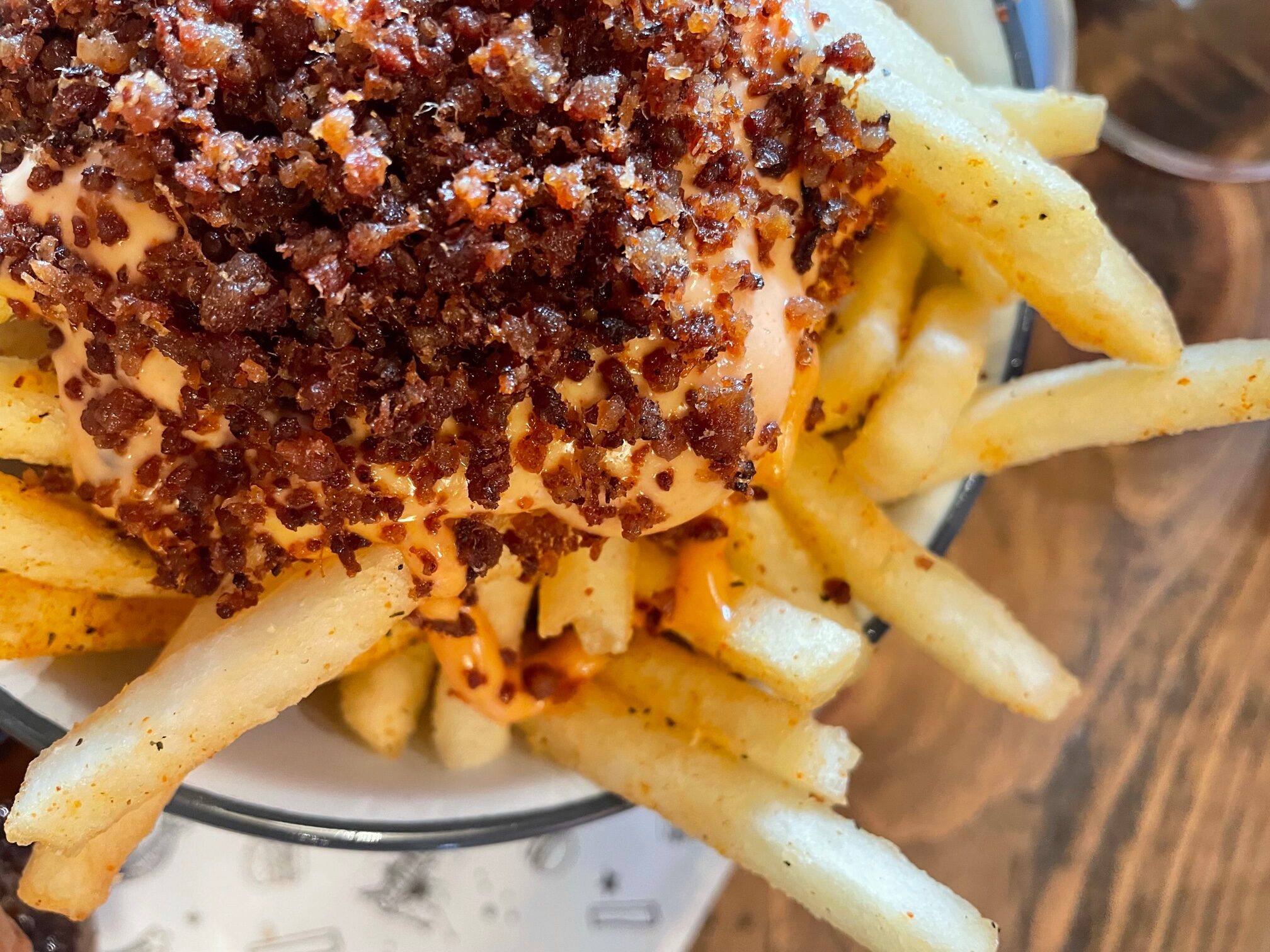 We left very full. Was it the best burger I’ve ever had? Absolutely not. Is it better than any burger I’ve had in that specific area? Yeah, but the bar isn’t set very high let’s be honest. I try not to subscribe the whole “which is the best burger place in Brum?” narrative because the truth is we’re blessed to have many across the city – bricks and mortar and traders as part of the ever expanding street food scene – that offer choice and something for everyone. (You don’t have to love the sweet offering at Hanbao, for example, but others do so maybe just let folk enjoy themselves, yeah? You’re not Goldilocks and burgers are not porridge). But the fact is we’ve been missing a decent offering slap bang in the middle of the city centre for some time and I think Fat Hippo will do fine providing it sorts out the inconsistency issues that seem to be plaguing them.

Disclosure: I used a voucher towards some of this – I paid the excess/tip. All words, photos and opinions about getting drunk on Bennetts Hill are mine – you can see more here.