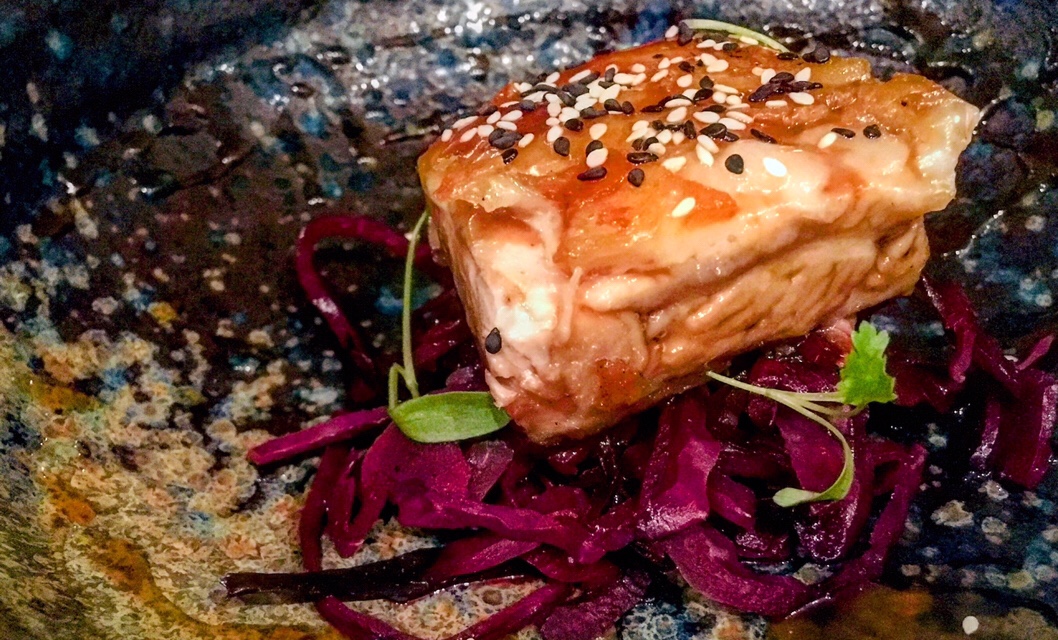 I vividly remember the day I booked a table at Purnell’s Bistro. It was the same day grown adults yelled at each other across the internet over a vegan sausage roll.

Thankfully, by the time our dinner at this city centre bistro came around the gammons on Twitter had gone back to arguing about gender neutral hamsters, or something equally poignant, and we enjoyed a relaxed supper without perplexed vegans hiding behind laptops… or sausage rolls, for that matter. Truth be told, this bistro visit had been long overdue. Ian and I have sipped many cocktails in the bar but hadn’t yet made it to the restaurant, choosing to say “we should eat here one day,” after too many tumblers of neat booze. 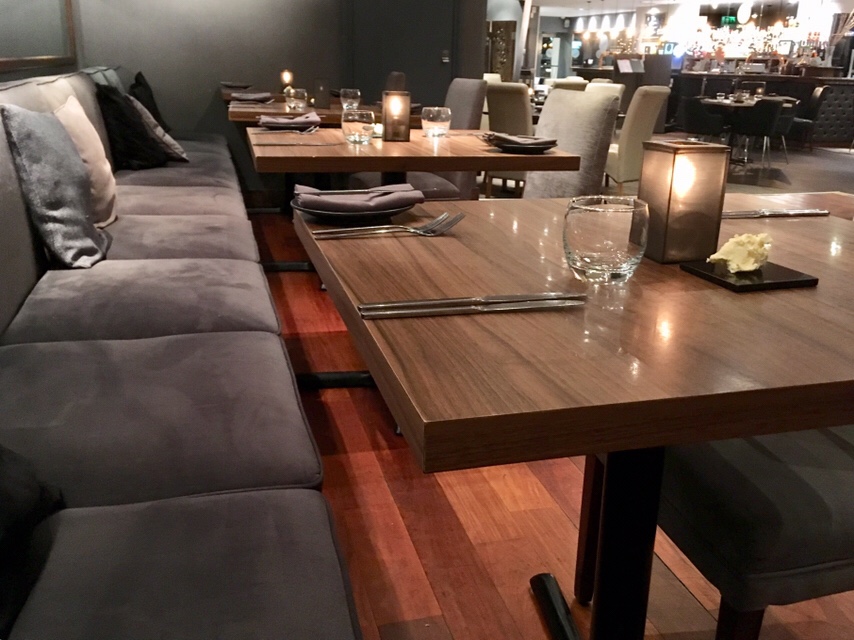 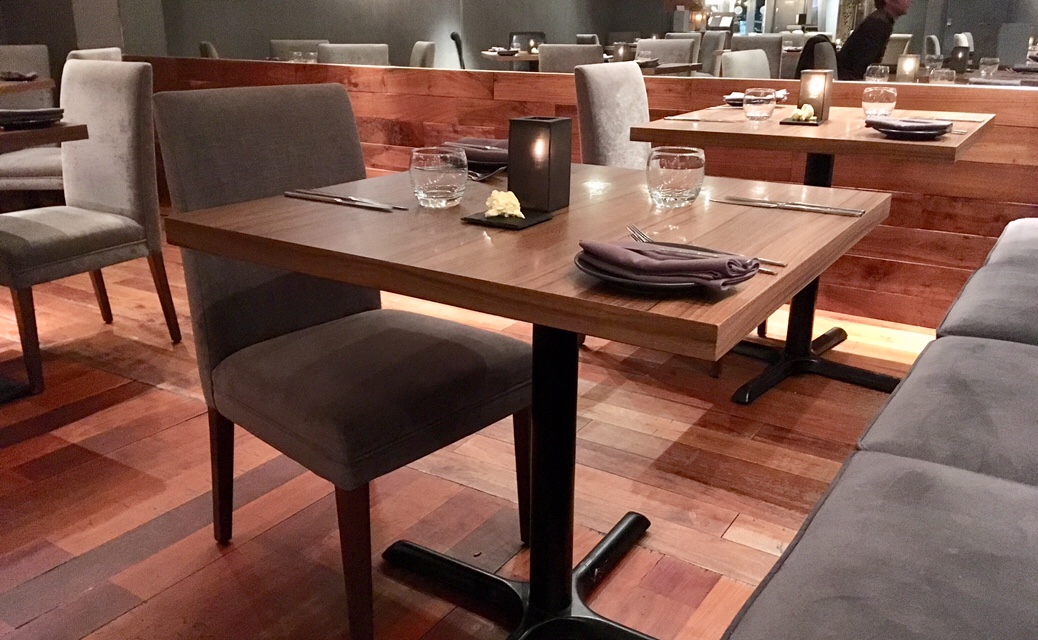 Aesthetically it’s smart but inviting, with grey suede soft furnishings, dark wood tables and leather high-back chairs. The bistro was quite quiet during our early evening visit so, while it lacked a little in atmosphere until more tables arrived, the staff were able to shine. This may not be Glynn’s most prolific joint – the posher counterpart, Purnell’s, is just up the road – but the hospitality is that of a fancier place. I actually couldn’t fault the service throughout. 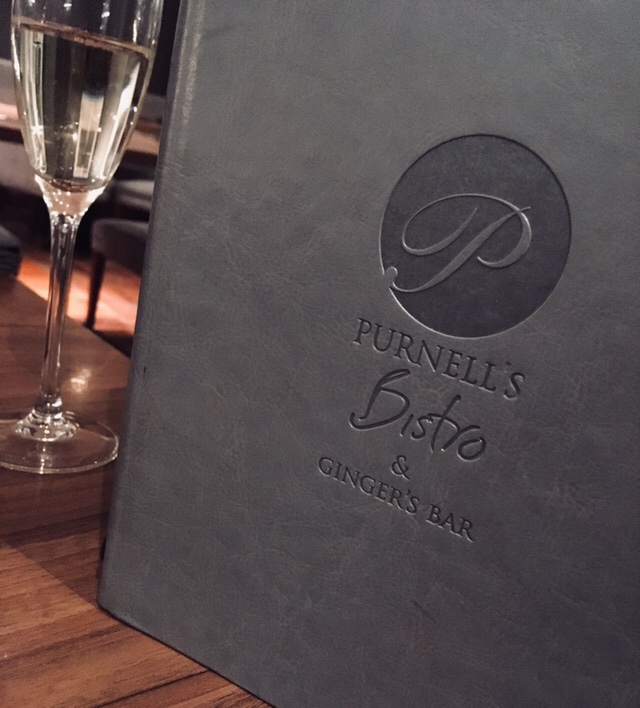 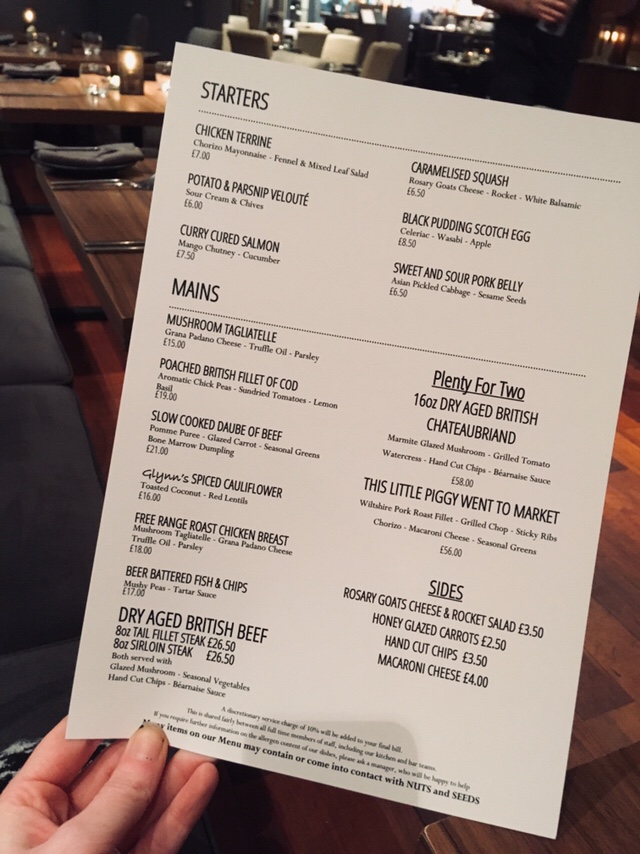 The a la carte menu predominantly leads with British fare, throwing in occasional nods to our European neighbours that (as yet) you don’t require a visa or blue passport to enjoy. Food is homely and well portioned, with enough finesse in the presentation to make it all feel that bit more special. I started with Sweet and Sour Pork Belly (£6.50) which remained my favourite dish of the meal. Topping a nest of pickled red cabbage slaw, the square of pork was more meat than fat and fork tender, with a nice crispy top of crackling. 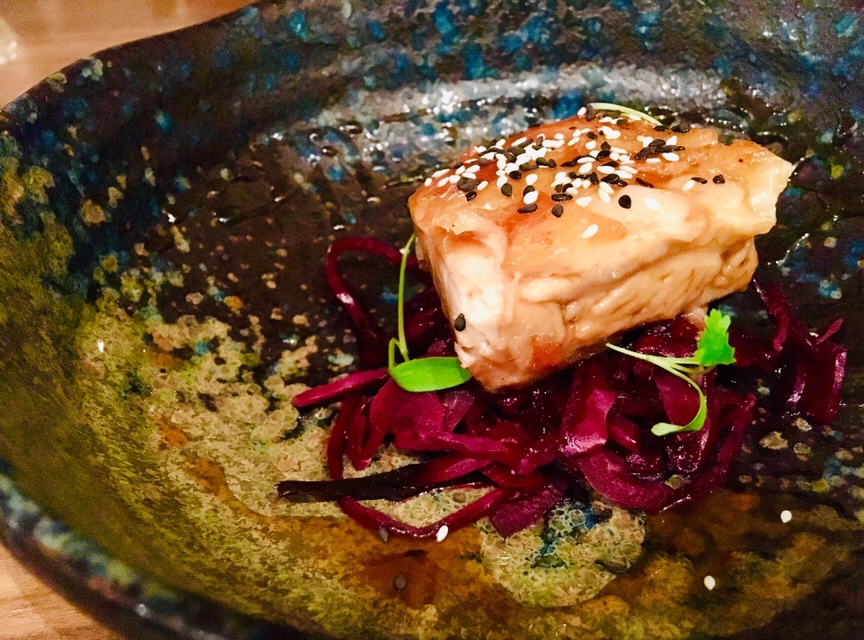 Ian’s Black Pudding Scotch Egg* (£8.50) was more mild in the iron flavour he expected but he polished the lot off so I’m assuming he enjoyed it.This all came alongside a basket of homemade bread and a whipped butter I’d have happily finished with my bare hands had that not been considered trampy by those close by.

*He has since let it slip the Pint Shop Scotch egg remains his favourite in Brum. 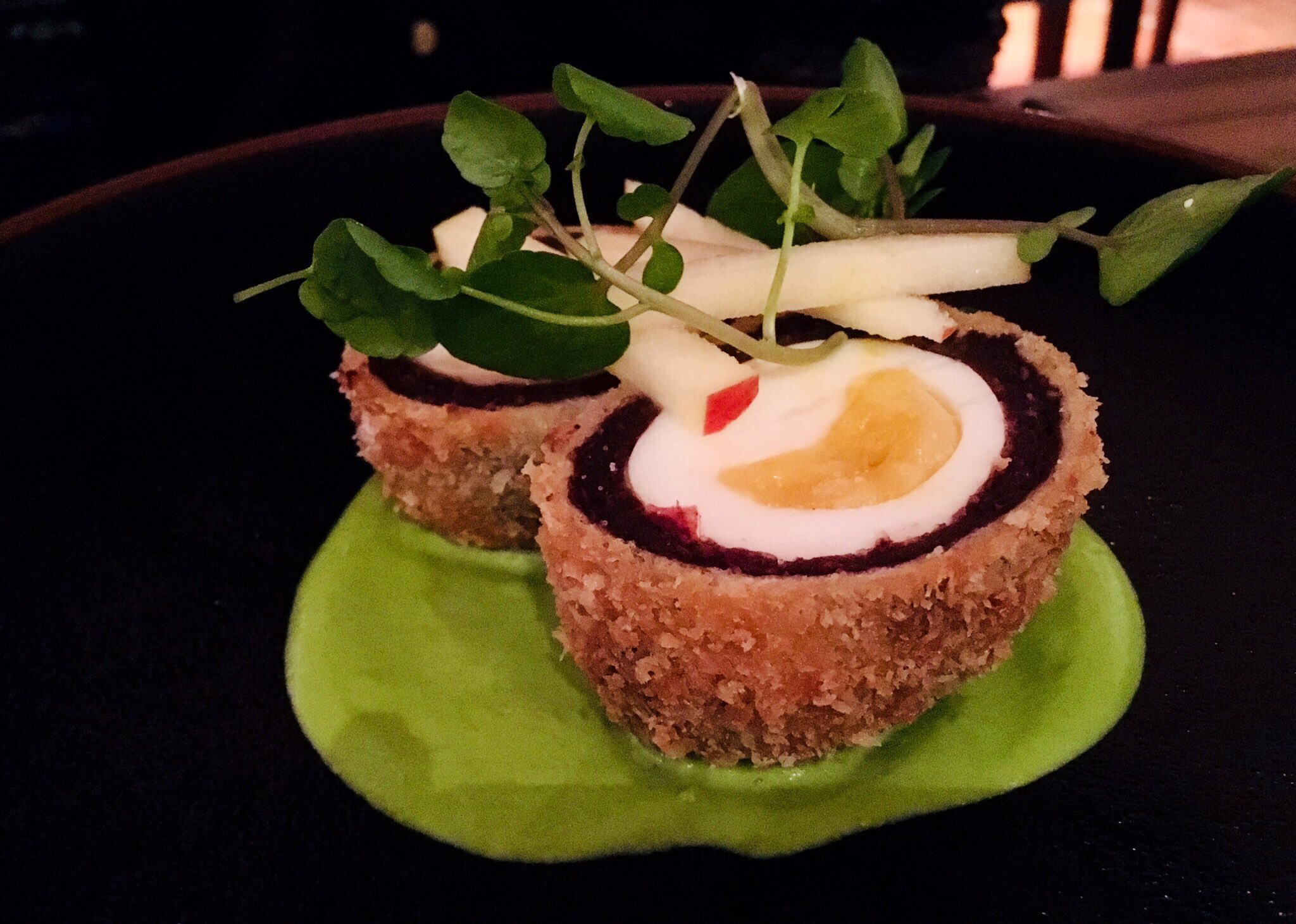 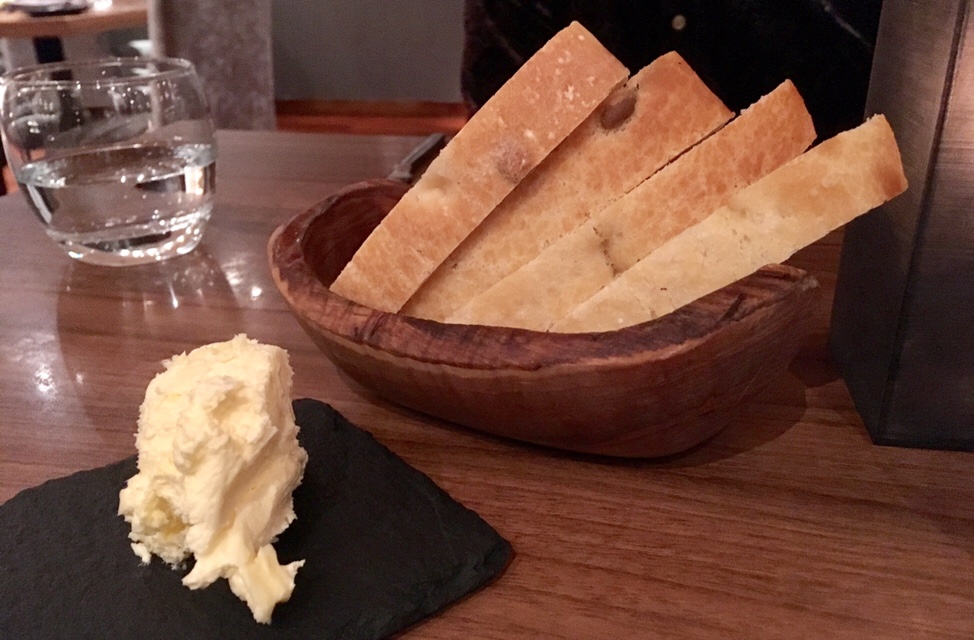 If you enjoy a rich, truffle oil fuelled pasta dish, the Chicken with Mushroom Tagliatelle (£18) is worth having. The breast meat retained its juiciness within a cocoon of crisp skin, nestled next to a more than adequate bundle of pasta ribbons laced with silky truffle oil and strewn with wild mushrooms. I’d have liked a few more shavings of the tangy Grana Padano cheese. I didn’t get to snaffle much of Ian’s Slow Cooked Daube of Beef (£21) although the meat fell apart as you’d hope, with a hearty dollop of creamy mash potato to make it an ideal winter warmer. 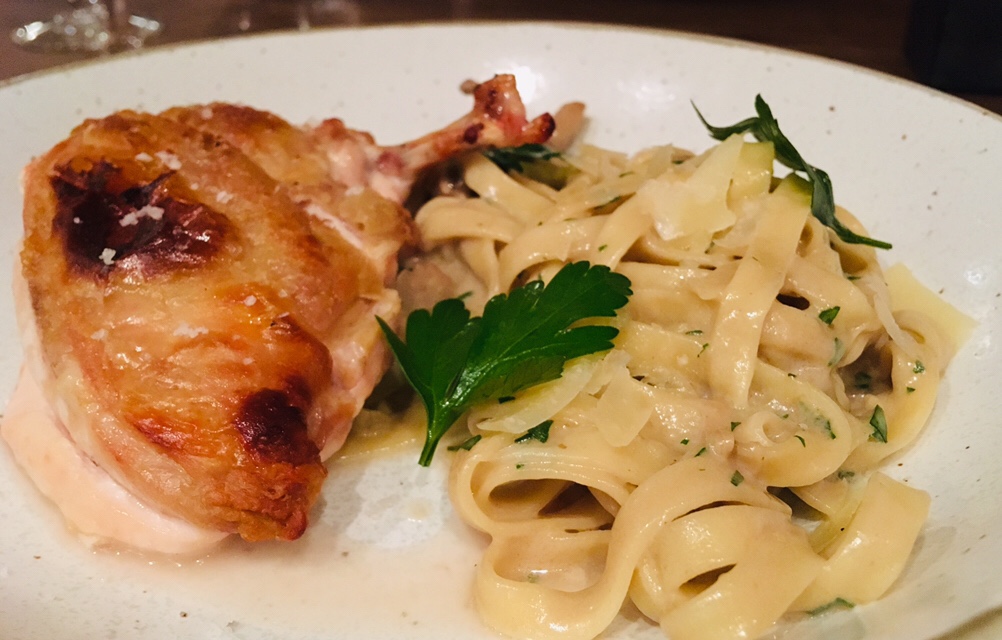 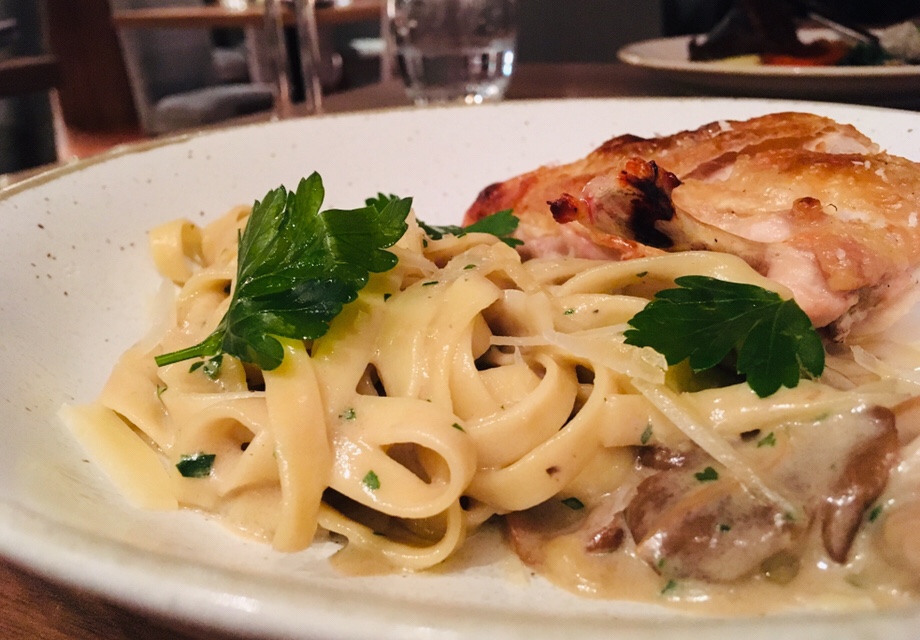 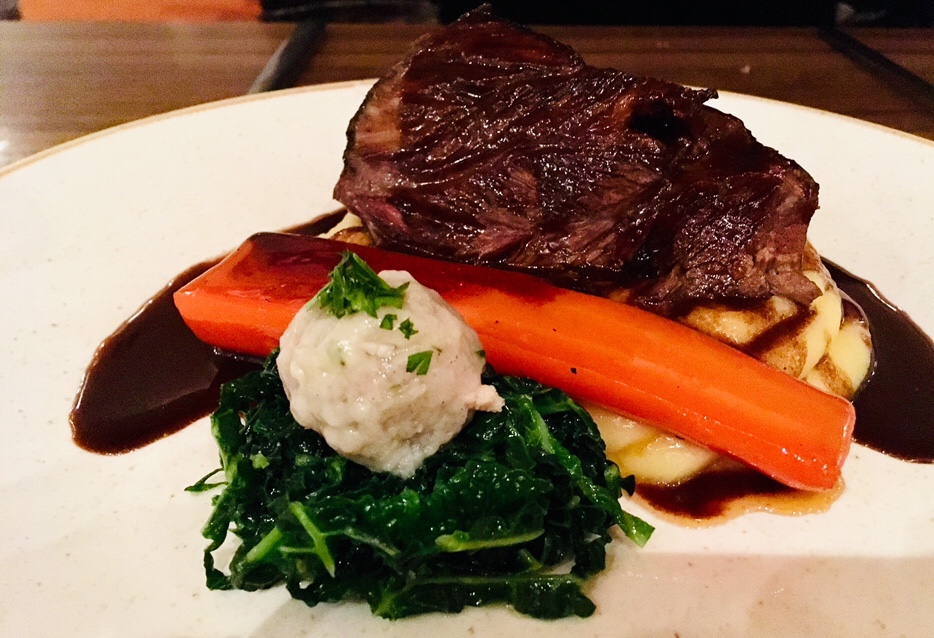 As part of Purnell’s Bistro you’ll also find Ginger’s Bar. As I said before, Ian and I have popped in here before just for drinks, and I have to say the Negronis are very good. Strong, well made, and large – just the way I like mine. The seating area in the bar itself is a bit tatty in parts, however, and some of the fabrics on the stools and chairs look a bit weathered – a lot like me after the 3 nights on the pop in Cleethorpes I’d survived before dining here. 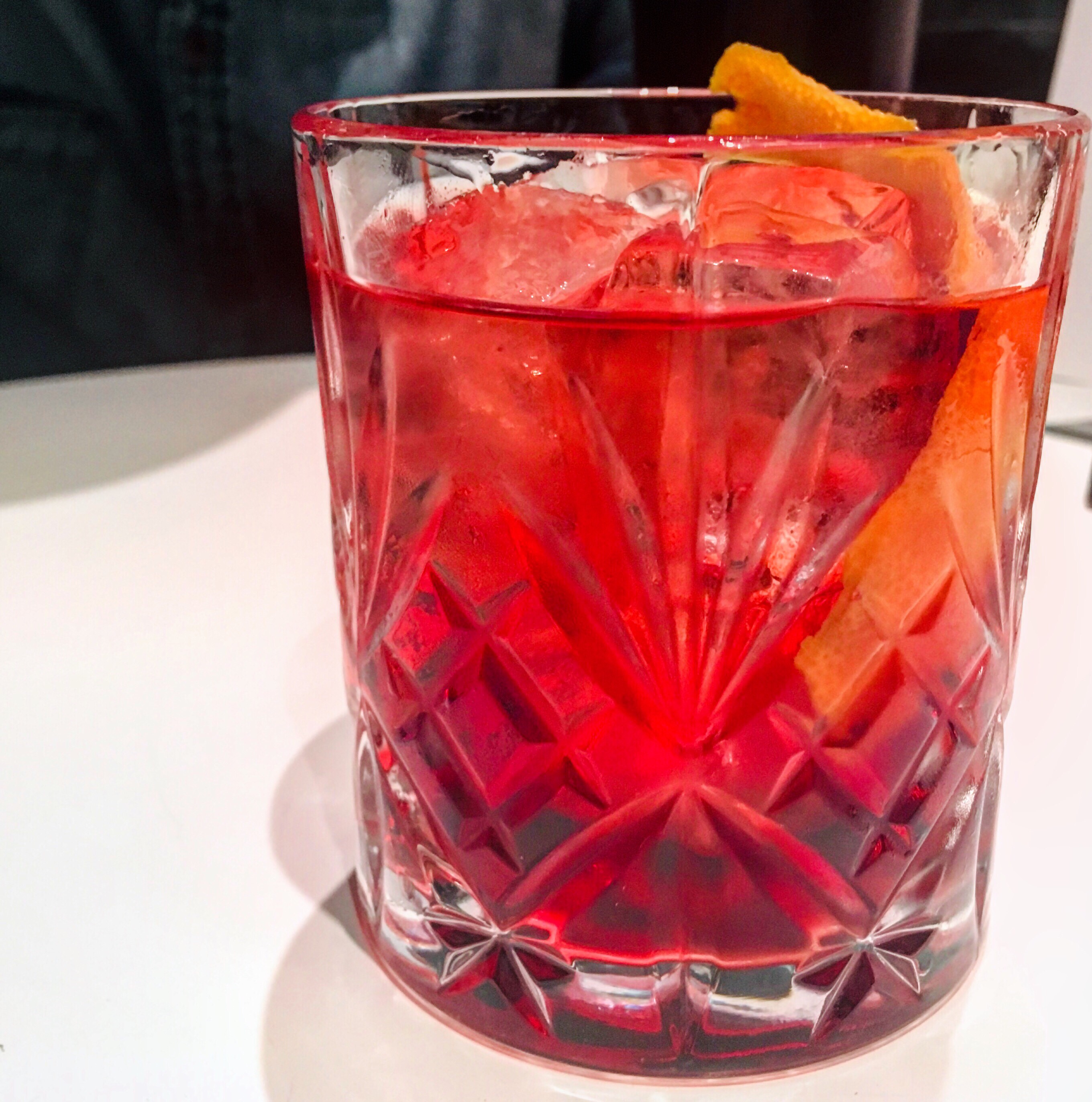 While it may not have the same following as Purnell’s (or price tag) Purnell’s Bistro offers good food at a fair price point, considering the quality and service. There’s also a set lunch menu for £20 if you want a well-priced daytime dinner in central Brum that’s a little more special.

As for that meat-free Greggs pastry, I had one a few days ago – it was alright, if you’re wondering. I guess the Daily Mail would say that makes me a snowflake millennial vegan traitor now.. marvellous.

Disclosure: I paid for all food/drink included in this post. All words, images and Greggs ‘sausage’ rolls are my own.

Absolute feast at Topokki earlier. Huge portions for about £11.

Look, the #MaskedSingerUK is absolute shite and usually I wouldn’t give a fuck about the discourse around it. BUT… I just heard rhino in the pub and let me tell you now: that’s Charlie from Busted. I’d literally bet my life on it. You’re welcome.