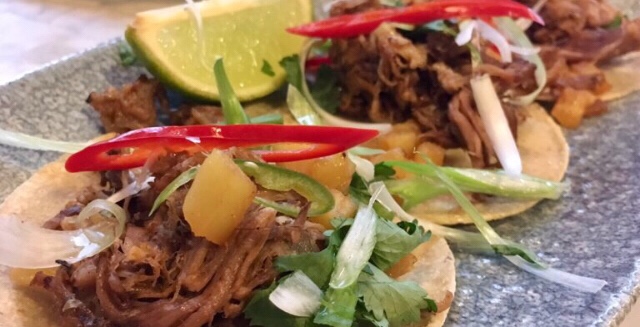 I must admit was a bit baffled when I heard Revolución de Cuba was opening up right opposite Las Iguanas on Temple Street.

Why would a Cuban-inspired bar and restaurant want to set up camp literally 5 metres away from a venue offering something so similar? Two chains going to war: be interesting to see how this plays out, I thought. In truth, despite both selling burritos and rum-based cocktails, there’s enough that makes them different. With Las Iguanas being vastly overpriced for what it is, I tentatively joined the revolution, so to speak, to try the tapas options.

I actually first visited Revolución de Cuba during the launch week back in March. I got a preview glimpse of the venue, taking up the space once occupied by the law library. It’s an attractive use of space over 2 floors, and the main ‘ballroom’ upstairs has retained lots of the gorgeous original features. It’s not just a restaurant either; this place aims for a real party atmosphere at the weekend, with live music and dancing with your rum cocktail is very much encouraged. 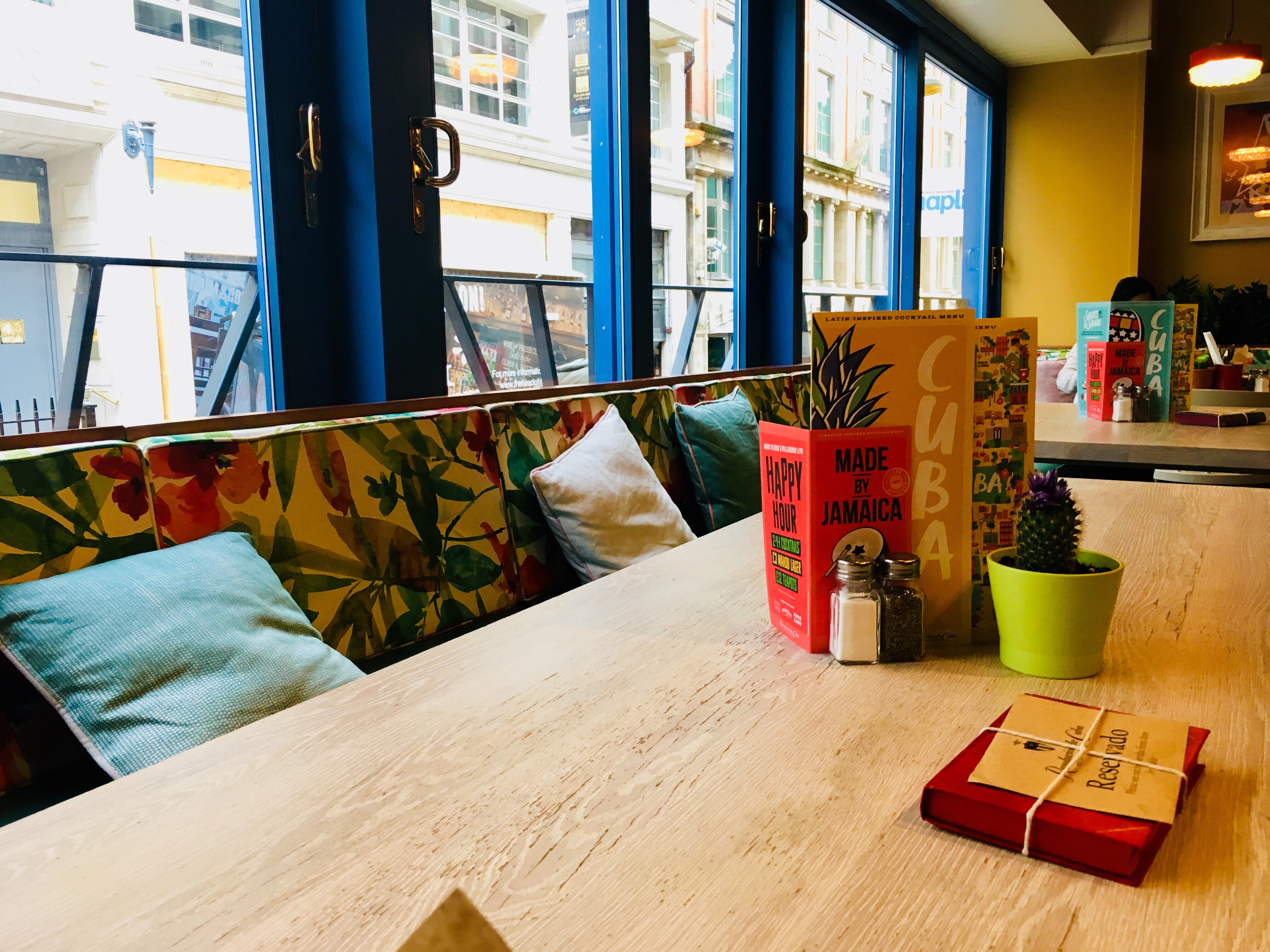 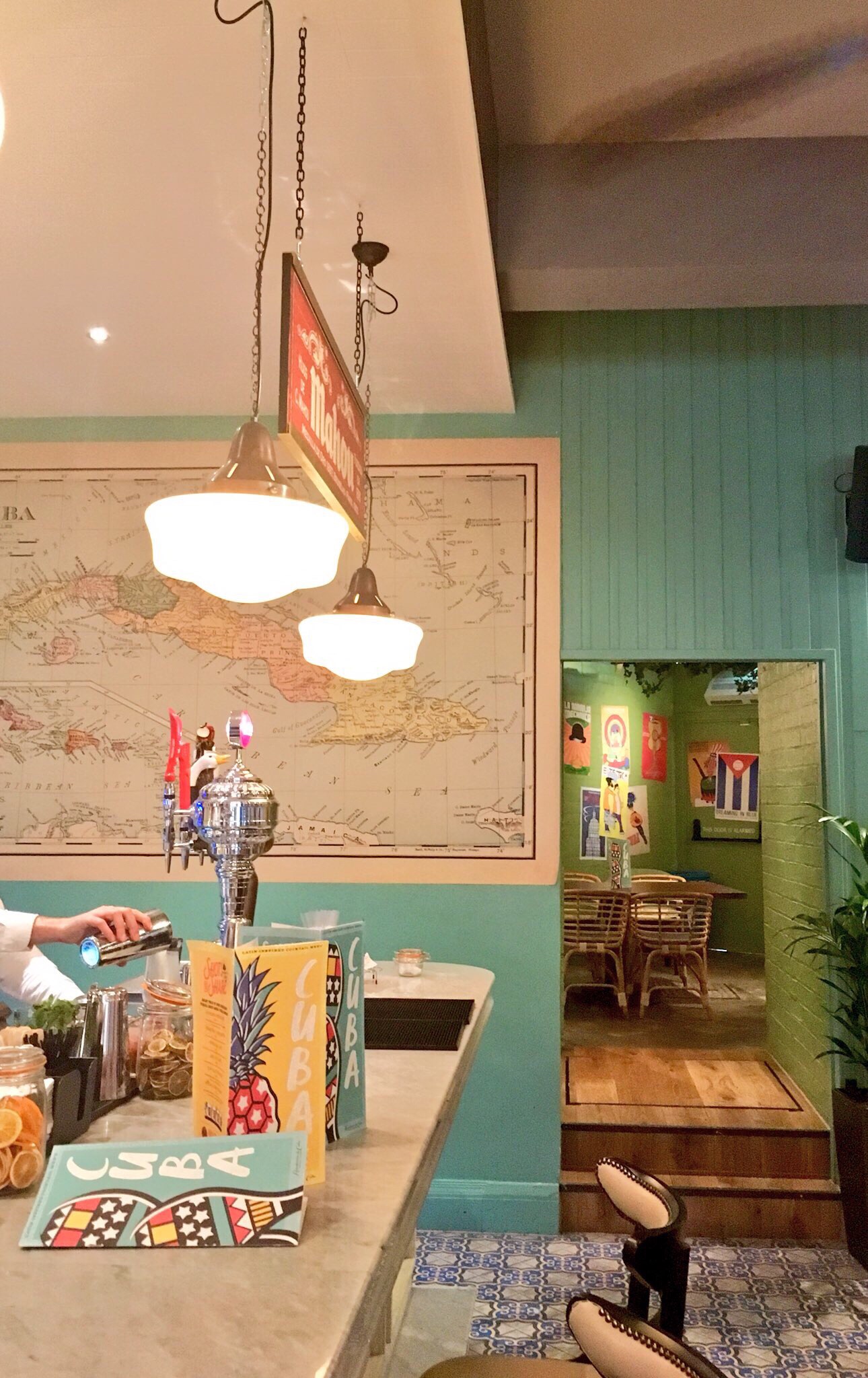 Offering a ‘slice of Havana’ here in Brum, the menu is largely inspired by Latin America with a few Caribbean nods. There’s tapas to nibble with friends or a main menu for meals including burritos, burgers, baked fish, and sunshine salads. There’s also a well priced £6 lunch deal during the week if you’re in a rush. 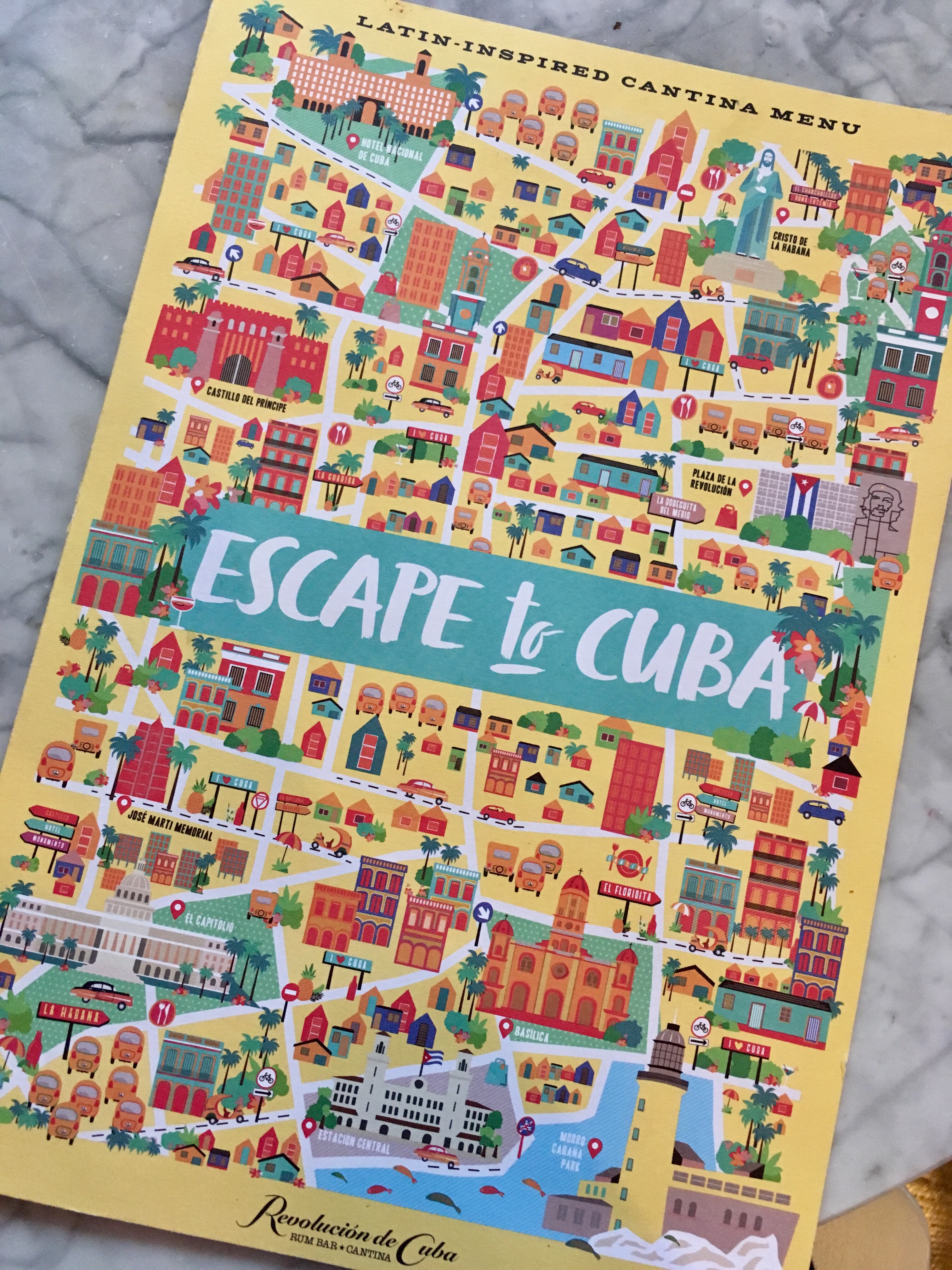 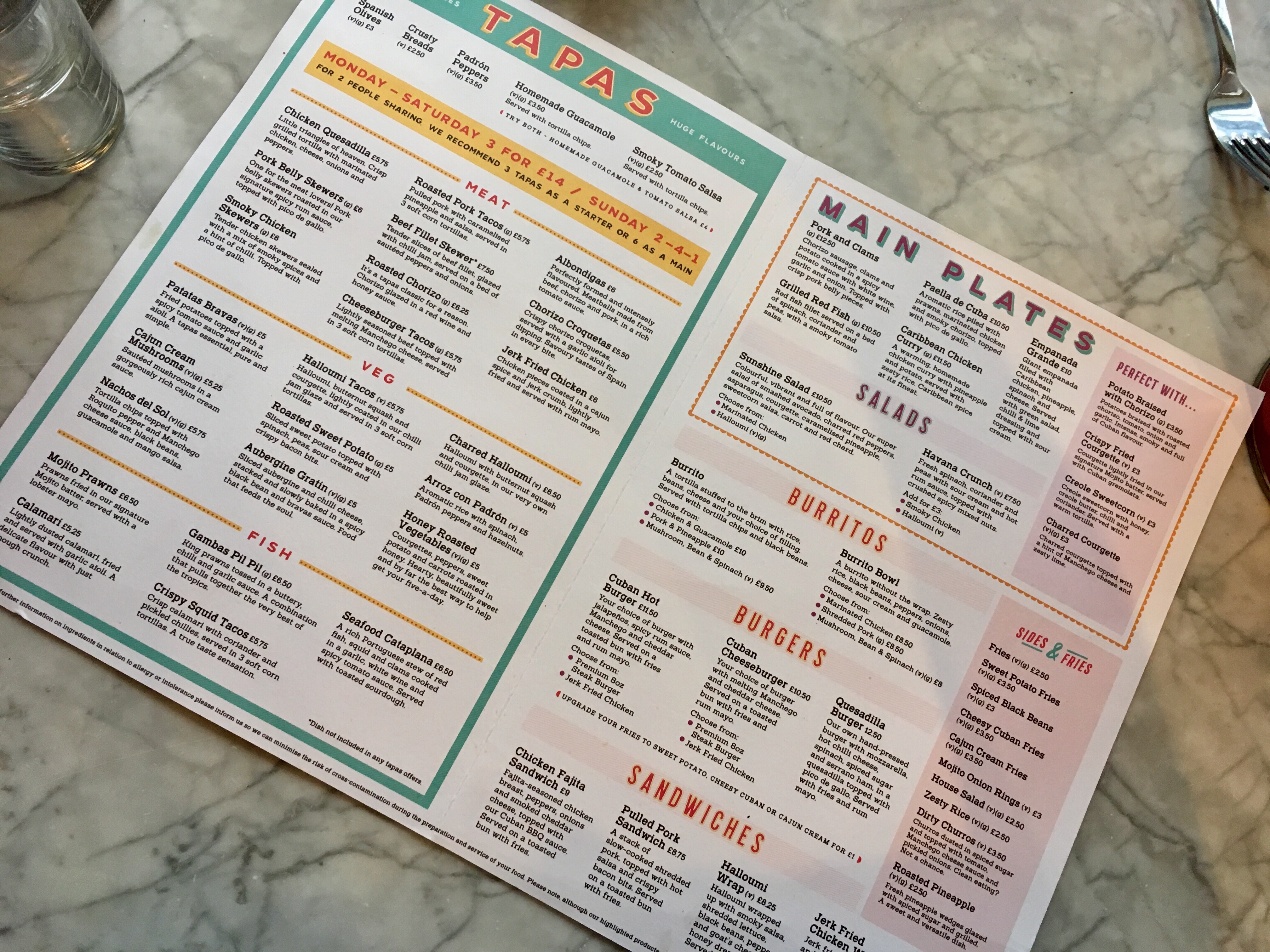 We kicked off with a selection of small plates to share; three dishes come in at £14 with the daily tapas offer. It was suggested we have three each so we ordered six plus two cocktails. They arrived soon enough but in truth I found the dishes a bit hit and miss. First up Pork Tacos with pineapple salsa made a decent first impression and are pretty good value for a fiver. Low n Slow standard these are not, but that’s an impossible ask; I’ve been spoiled by that man and his fiery ways at DDC. The same unfortunately can’t be said about the Chicken Quesadilla, which was seriously bland and had very little meat between the crispy layers. Bodega, on the next street up, does these bigger and better. 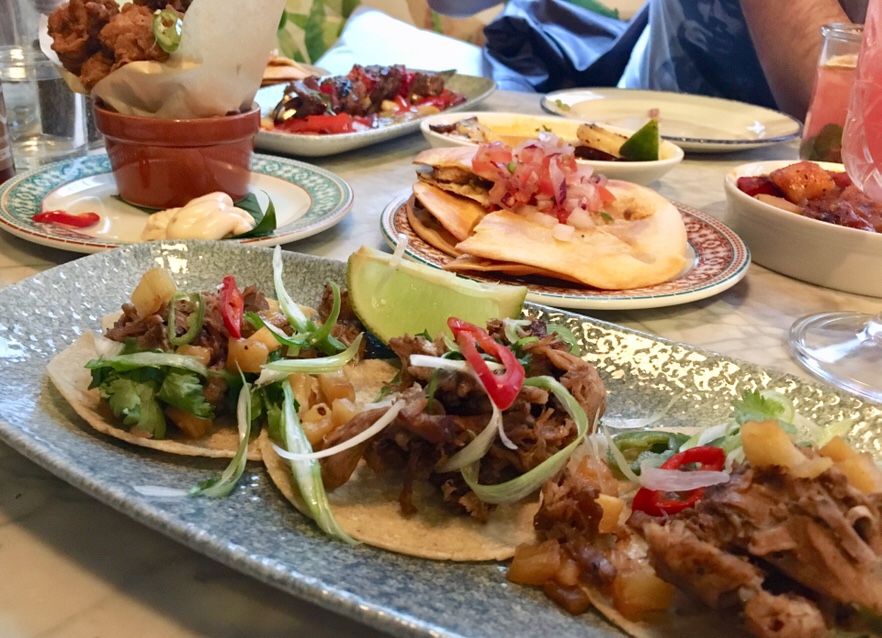 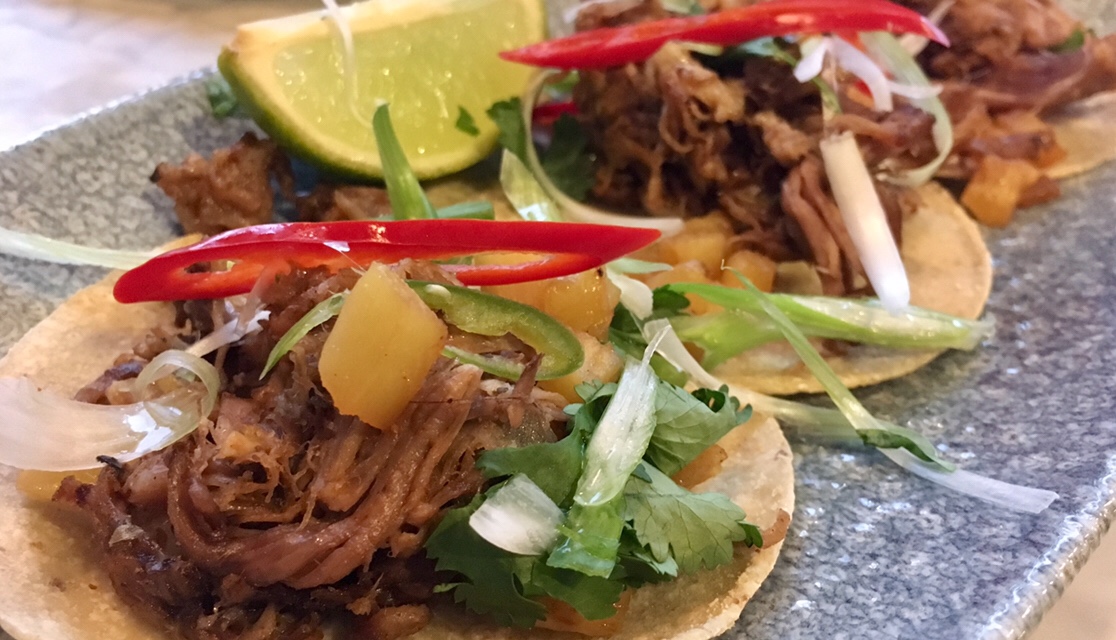 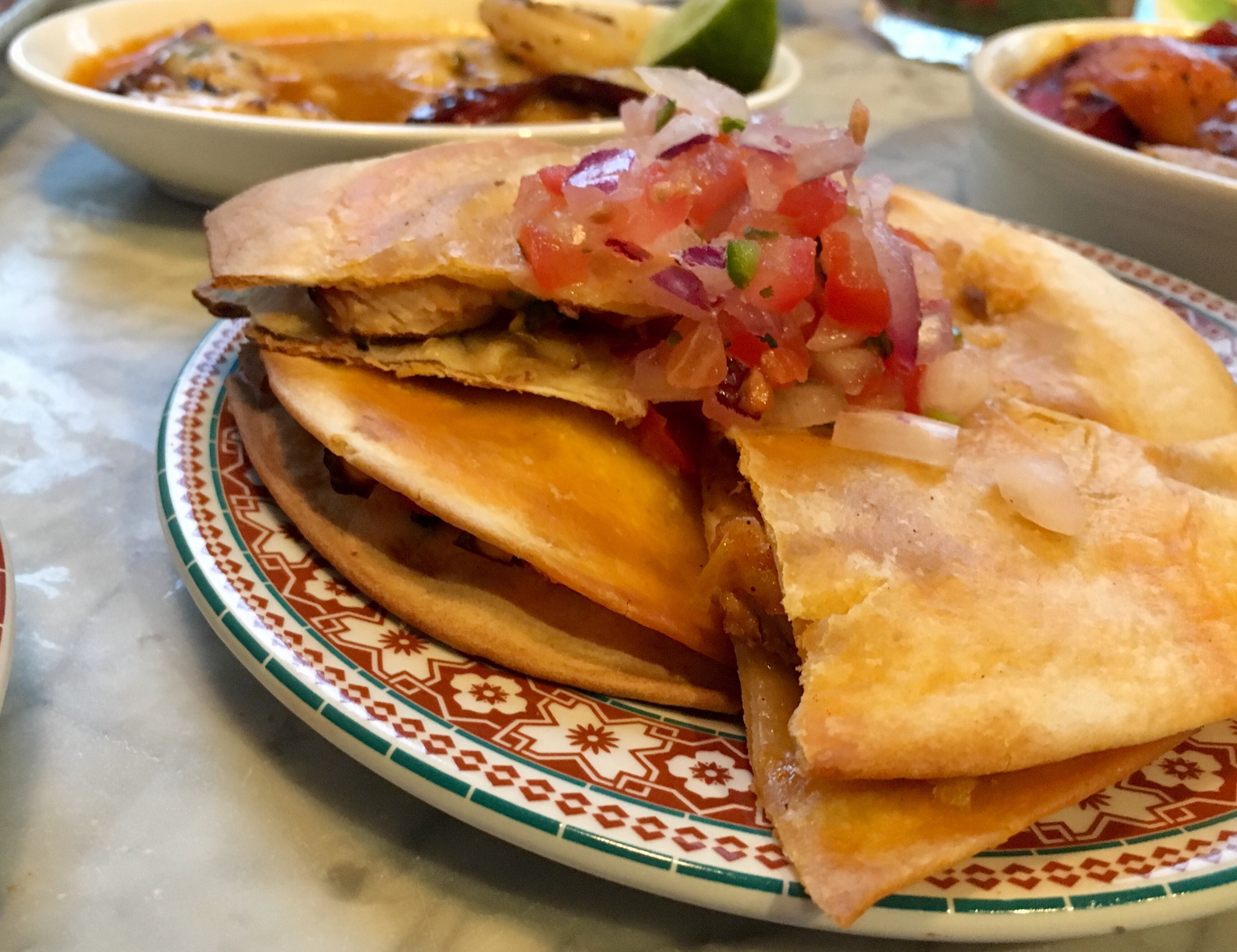 A generous portion of Jerk Fried Chicken pieces provided satisfying crunch and a mild hum of Caribbean spice and were popular on the table. The chilli glazed Fillet Beef Skewers were tender and actually rather delicious, but with just four small cubes of meat there’s not much to share. A bowl of Pil Pil Prawns made The Husband very happy, with a buttery sauce although it lacked much depth regarding spice and flavour. The additional bowl of Potatoes with Chorizo was fine without being exceptional. I’d have liked bigger pieces of the spicy sausage, instead of finding a sparse sprinkle of tiny bits. I don’t get the impression much thought has gone into the tomato sauce either; it tasted akin to a jar sauce you’d buy in Tesco. 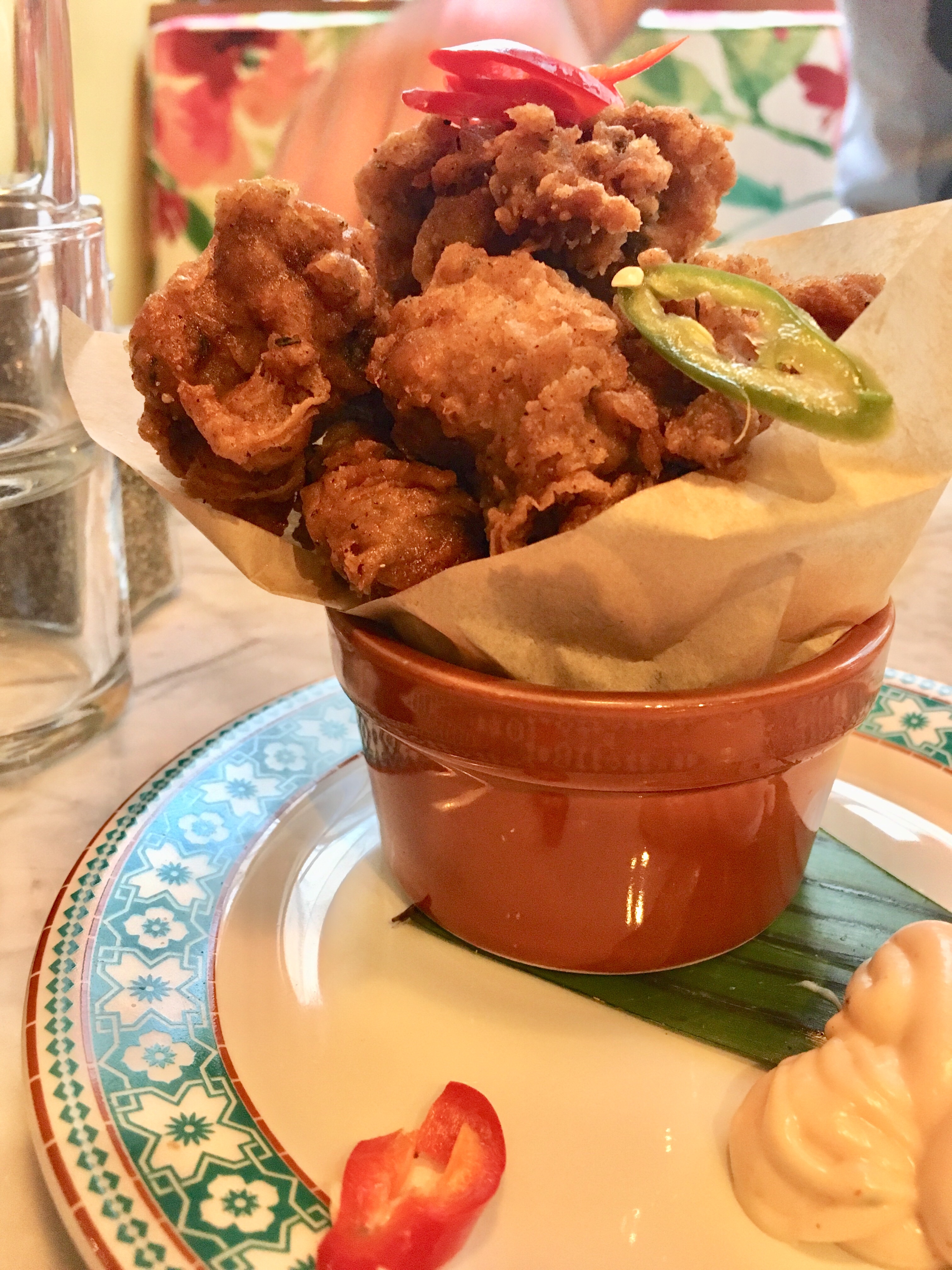 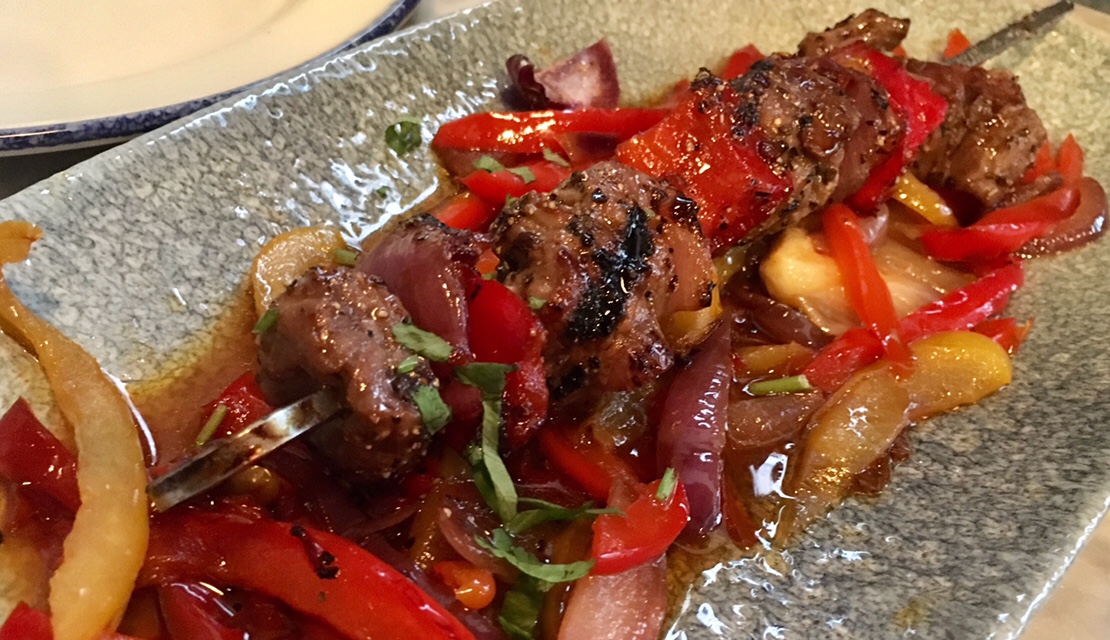 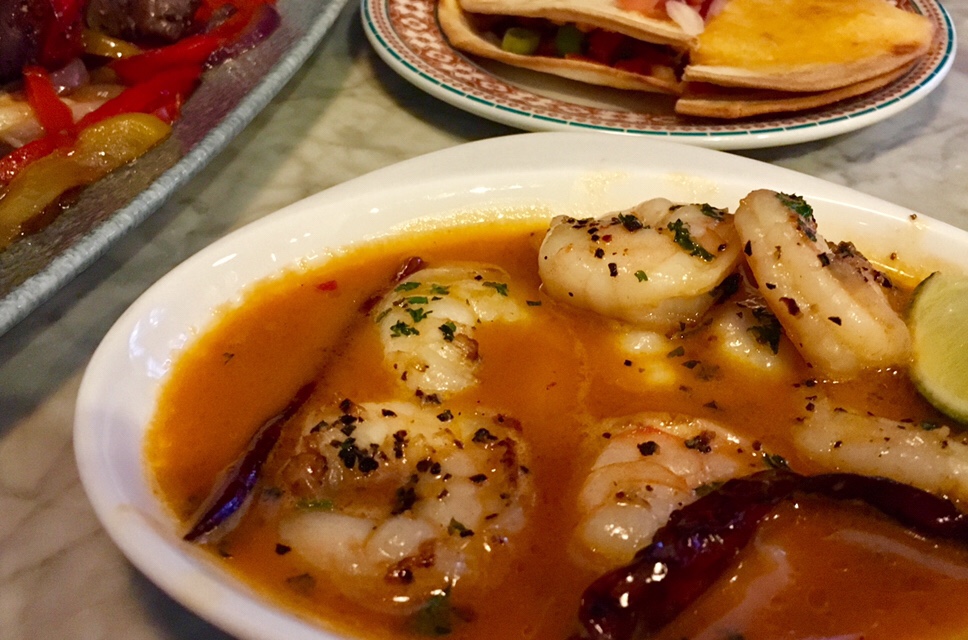 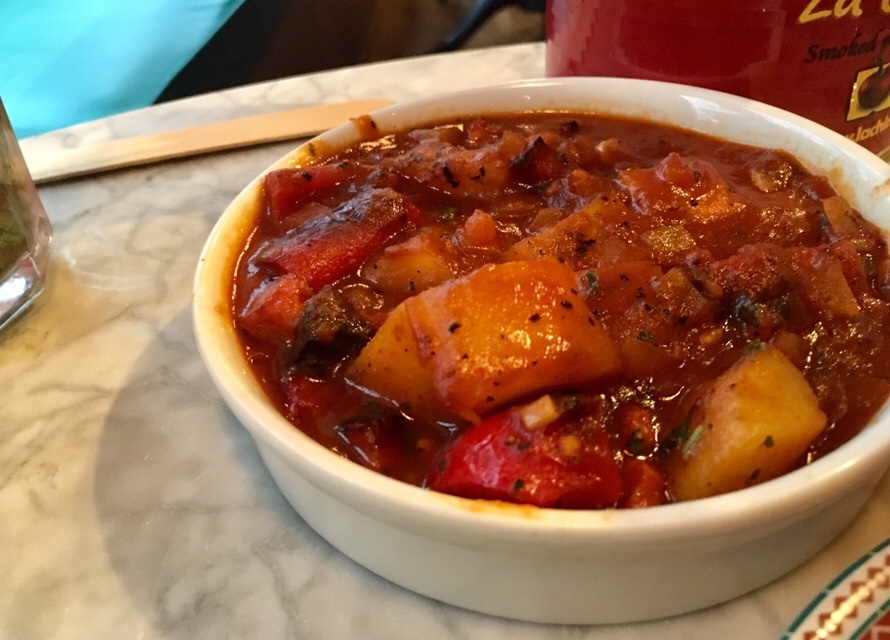 Cocktails are the focus of this place, especially in the gorgeous upstairs area. There’s six mojitos to choose from, as well as rum punches and classic cocktails including margaritas. There’s 2-4-1 available on the cocktails 3-7pm weeknights, so check the website before you visit if that’s up your street. We tried the Blood Orange Margarita (£8.75) and Creole Mojito (£8.50). The former is the least sugary thing I could find on the menu and I enjoyed it very much, but elsewhere be prepared for the fruit juice overload. Some nice beers can be had too; I liked the Dos Equis XX. 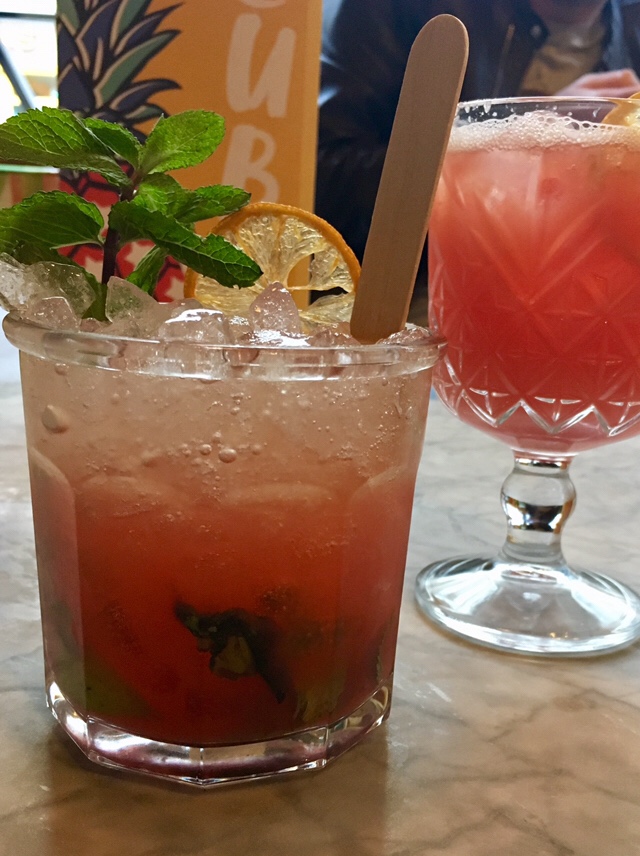 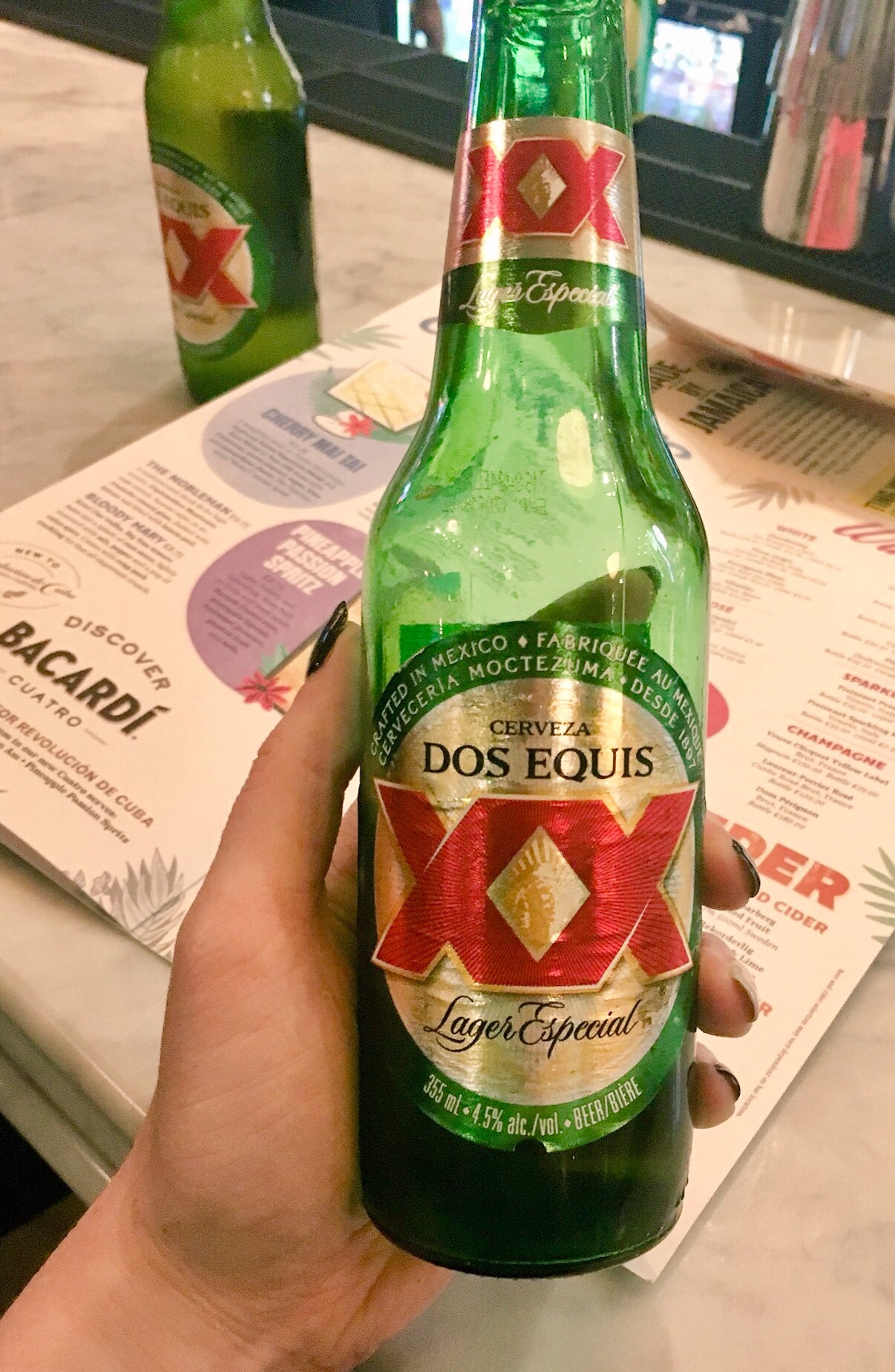 Is it like eating food in Cuba? No, of course not. But the food is cheap (most mains are under a tenner) and with the party atmosphere my money is on it being popular after work and at the weekends with the younger crowd. Now, I hate to end on a negative but the music in the dining area is notably very loud, to the point of being distracting and obtrusive; I like to be able to hear my dining companions as a rule. I’d also recommend asking for a table away from the door else you end up sitting in a draft as people come and go. Like I said, a bit of a mixed bag from my two encounters. It’s far too busy upstairs for my 30-something self to cope with come a Saturday night, but I’d perhaps come back on a Sunday (when they offer 241 on tapas) with friends to share some small plates with a beer, but it won’t be top of my list.

Have you visited this place yet? Let me know in the comments.

Disclosure: I was a guest of the venue. All opinions, words and photos are mine.

Absolute feast at Topokki earlier. Huge portions for about £11.

Look, the #MaskedSingerUK is absolute shite and usually I wouldn’t give a fuck about the discourse around it. BUT… I just heard rhino in the pub and let me tell you now: that’s Charlie from Busted. I’d literally bet my life on it. You’re welcome.