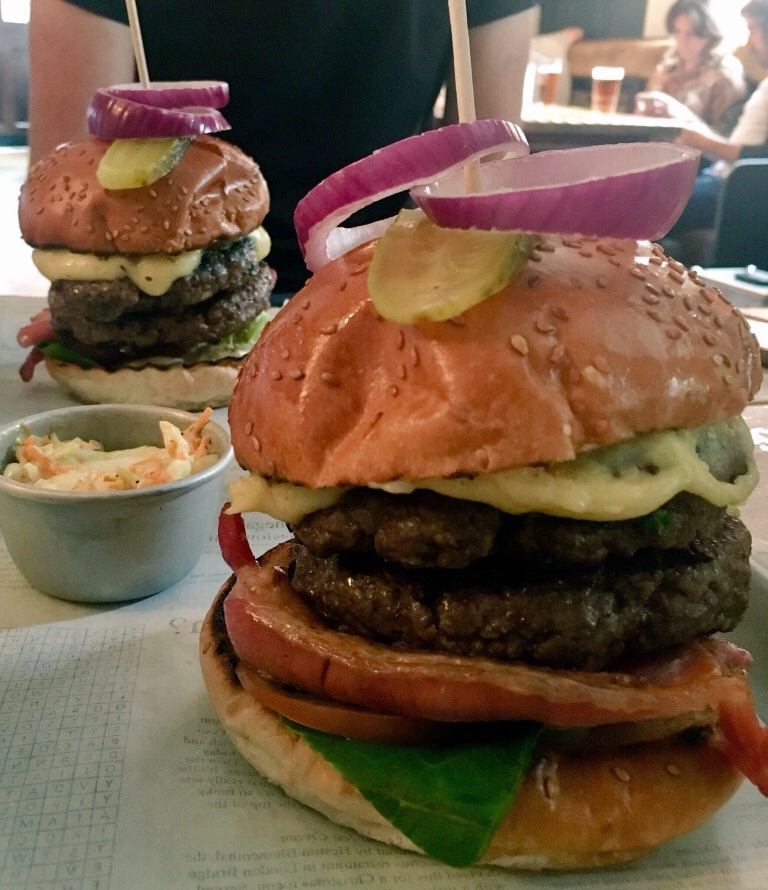 With its big beer garden and tempting sounding burgers it was inevitable I’d end up dining in The Old Crown Digbeth eventually; coincidentally next door to the weekly DDC street food pop up.

Birmingham’s oldest inn, The Old Crown dates right back to 1368 (I think dinosaurs were alive then?) and is a beautiful building; the exposed original timbers especially ensure its history is on show for all to see. I’ve been a fan of this pub for many years – working in the Custard Factory over the road meant I spent many a sunny evening after work wearing my beer goggles in here – and yet before now I hadn’t tried the food. This changed last week when I popped in with the sole purpose of trying the burgers I’d been drooling over on Instagram.

With competition for Brum’s best burger now rife (OPM and The Meatshack are storming the city right now) I came hoping ye olde Crown would put up a pretty good fight. Happily I can confirm the burger game here is strong.

Arriving early evening on a Friday to find a relatively busy front bar (probably in part due to the vile weather) we decided to end the working week with a few drinks and some big ass burgers. The menu also offers massive Scooby-style sandwiches, tacos, steak, and fish and chips, but there was only one thing we wanted – and looking at the menu it looked set to be smothered in drippy cheese. fist pump

There’s five burgers to choose from, including beef, chicken and veggie options, each coming with a choice of chips and a side of slaw. We both opted for The OC (£8.50) doubled up (+£2.00) with added bacon, because.. well, bacon. The burgers arrived swiftly and certainly looked inviting.

I was happy to see two large, fat beef patties peeking out from the packed seeded bun, and once I’d stuffed the red onion rings and pickle inside (presentation rules seem to dictate them being on the outside) I couldn’t wait to take a big bite.

Each burger patty was juicy, moist and well seasoned; happily I discovered a hint of pink still running through the rich meat. There’s nothing much else added but the beef bar a bit of herbage, and it’s simplicity is all part of its meaty success.

Packed with a more than healthy slab of sloppy melted cheddar cheese, a slice of thick bacon and all the ‘fixins’ you’d expect (not enough places chuck on a slice of pickle anymore – fair play, OC!) the result is a satisfying bacon cheeseburger. Ian let me have his tangy pickle (steady…) which, combined with the gooey melted cheese and the crispy bacon, provided some contrast in flavour and texture.

The decent sized portions of chips (we tried the fat and skinny fries) were both crispy, and the homemade slaw side was fresh and pleasant enough, although arguably somewhat forgettable. I quite liked that it wasn’t swimming in mayo (bonus points) but it was luke warm, which felt a bit strange. The star of the show here – and rightly so! – is the meaty burger, and meaty it is. Is it an OPM or Meat Shack burger? Absolutely not, but it’s a bloody good effort and I’d happily return for another.

There is no other place in the city like The Old Crown. I know Digbeth isn’t everybody’s cup of tea, and you’ve obviously got DDC round the corner, but with 2 burgers for £10 every Monday you’re missing out on a banging boiger that’s cheap as chips.

The bar also boasts an excellent gin selection (side note: the bar staff were very helpful when I was deciding on my second drink) and there’s a cracking back garden for sunshine beers.. you know, when summer works properly.

Have you tried the food at The Old Crown Digbeth? Let me know in the comments.

Disclosure: We paid in full and enjoyed a couple arguing next to us over Hollyoaks for free