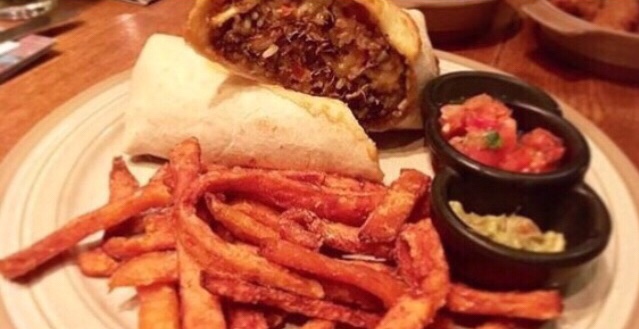 My poor pal Alison gets a right rough deal. Her birthday is the first weekend of January and everyone is either on a diet or on the wagon, but I always turn up (and make twice as much noise as normal) to make sure she knows she’s loved.

Loving Ali is easy to be honest because she’s one of the best humans I’ve ever met (she’s also fit as and single, boys!), but it’s even easier when celebrating her also involves eating Bodega burritos. 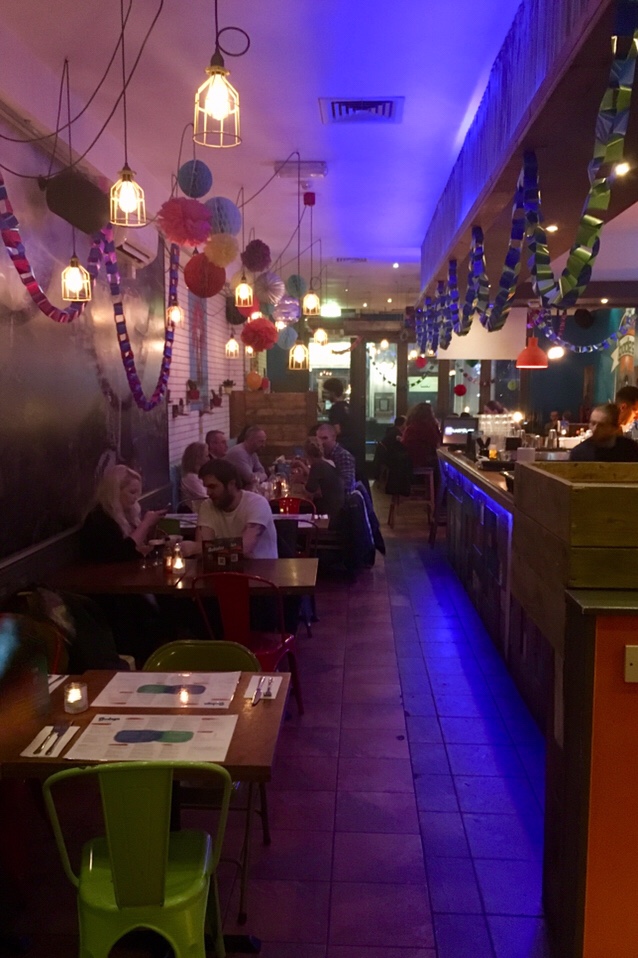 I’m no stranger to Bodega, as literally anyone that knows me will testify, and over the years I’ve consumed more meat and rice stuffed wraps than I care to think about. To memory, I’ve only ever had one meal there that left me unsatisfied, and that still wasn’t enough to keep me a way for long.

So when AlbertConkerFace as I affectionately call her – due to a ridiculous evening involving Boney M, a large amount of wine and a serious fall – suggested the Bennetts Hill cantina for celebratory feasting, I happily put my fat pants on. 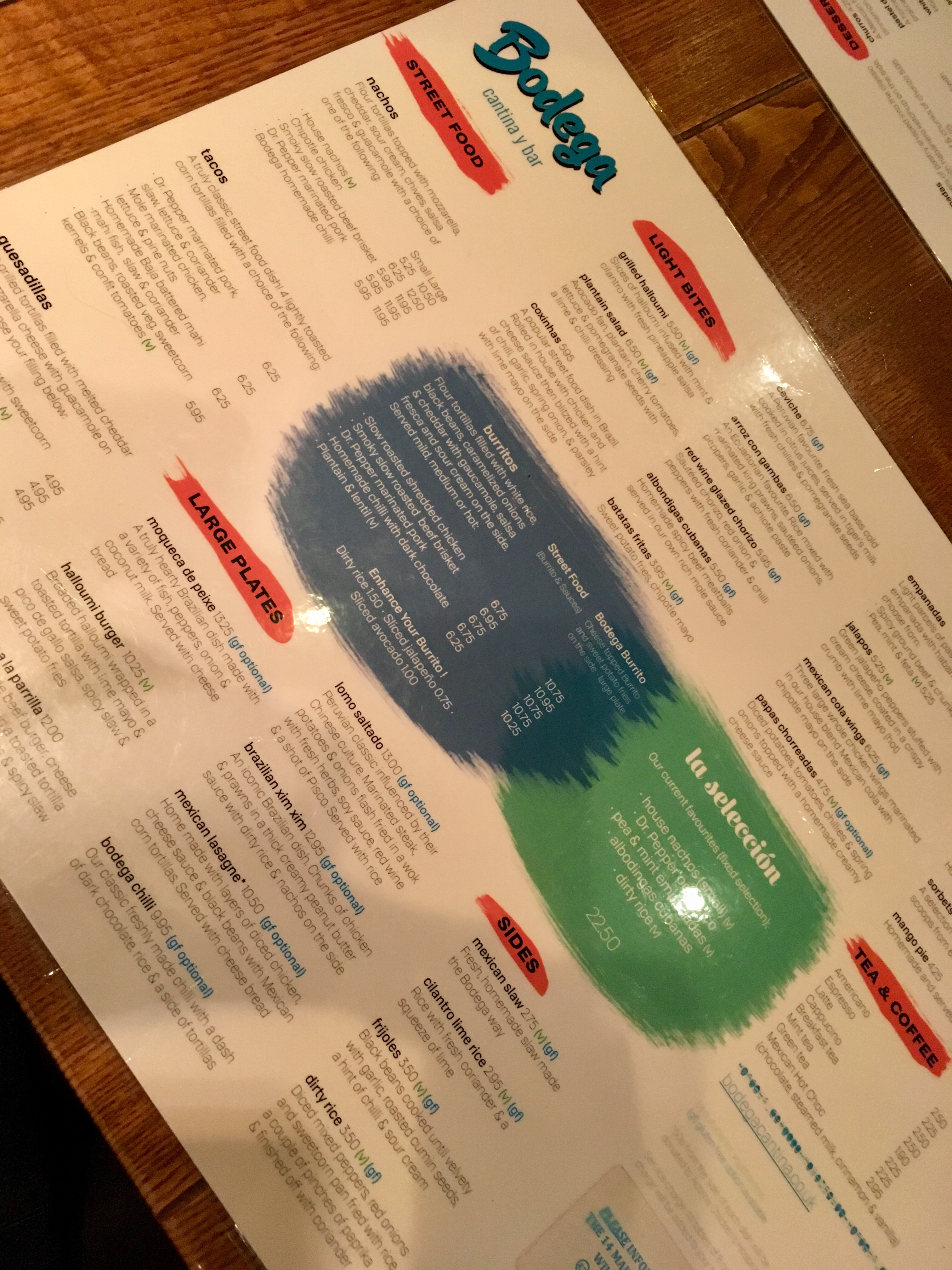 Bodega itself is part of the Bitters and Twisted brand (the same bods are behind the not-even-half-as-good Buffalo & Rye next door) and offers relaxed dining and cocktails in a colourful setting. Half of us chose mocktails, including the Elderflower Fizz and the Hummingbird (both £3) which arrived looking lovely albeit in a much less speedy time compared to ordering them. Thankfully the drinks were all good, the Hummingbird in particular being praised for its watermelon kick. 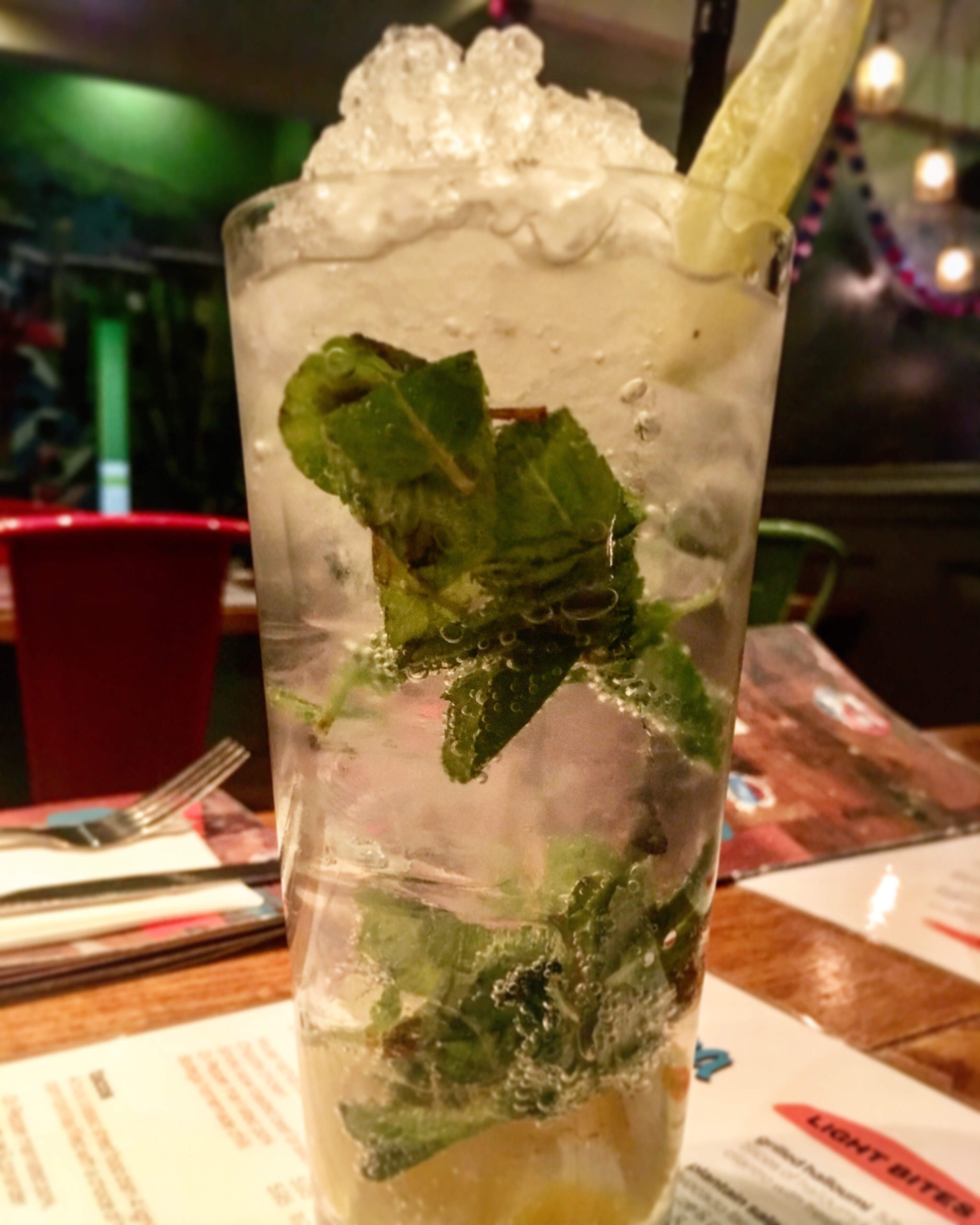 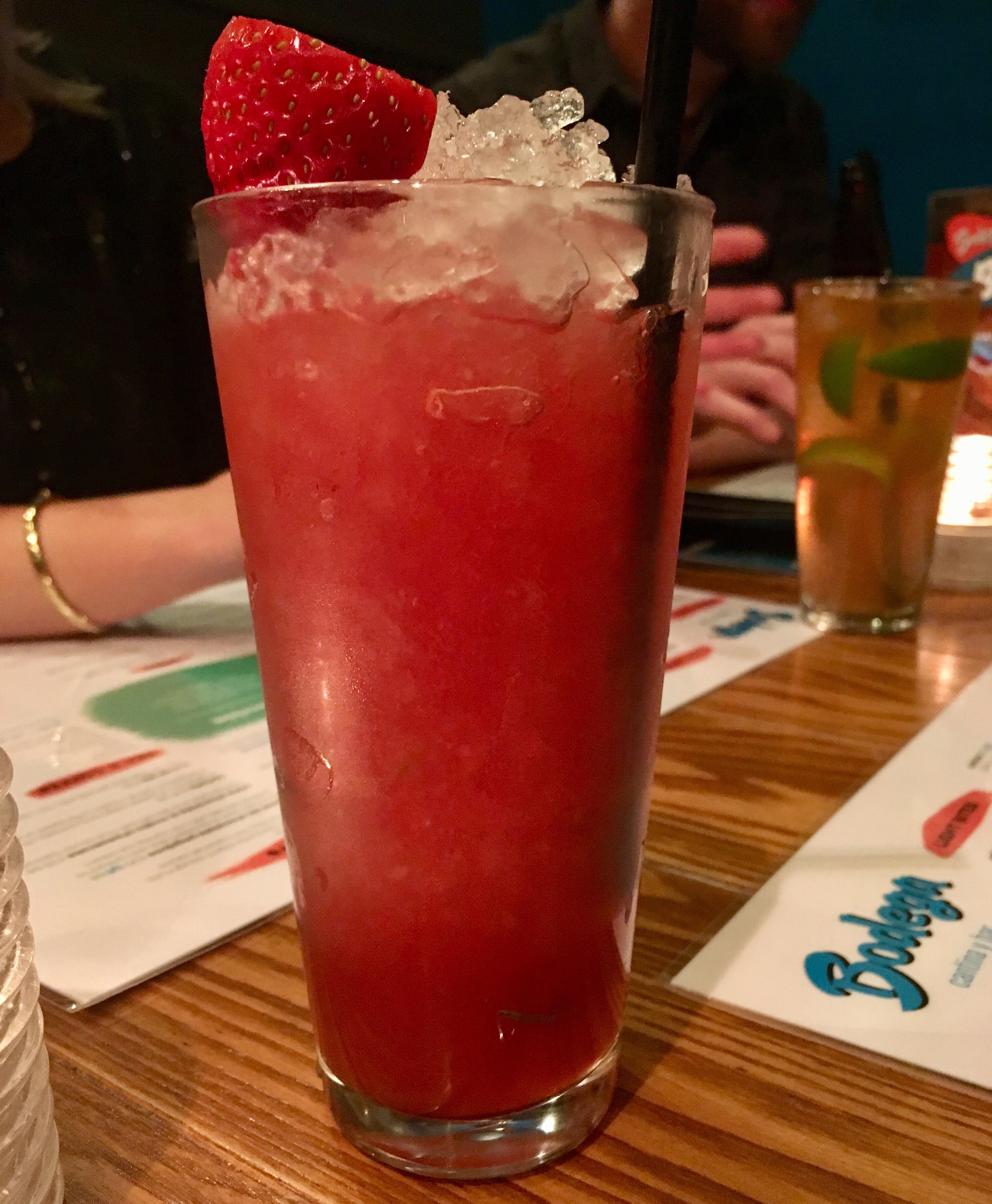 Being a creature of habit, I ordered the Slow Roasted Beef Brisket Burrito (£10.95) as a meal, with crispy sweet potato fries as well as a trio of sauces. As requested my beefy burrito filling came spicy; the flour tortilla stuffed to bursting with white rice, squishy black beans and a melted cheddar topping, with gaucamole, salsa fresca (both homemade) and sour cream on the side. 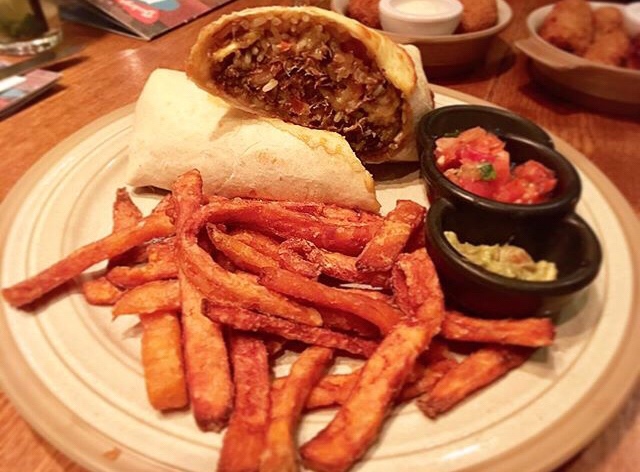 I also added lashings of my beloved Pip’s Hot Sauce for extra heat – and because it’s basically my favourite thing on earth. The burritos were all packed with fillings, and the meat inside was slow cooked to be tender and smoky. Having had a seriously boring burrito for nearly twice the price in Las Iguanas a week or so before (don’t ask, it was New Year’s Day and nowhere else was open) I was pretty happy to be back in the bosom of Bodega. 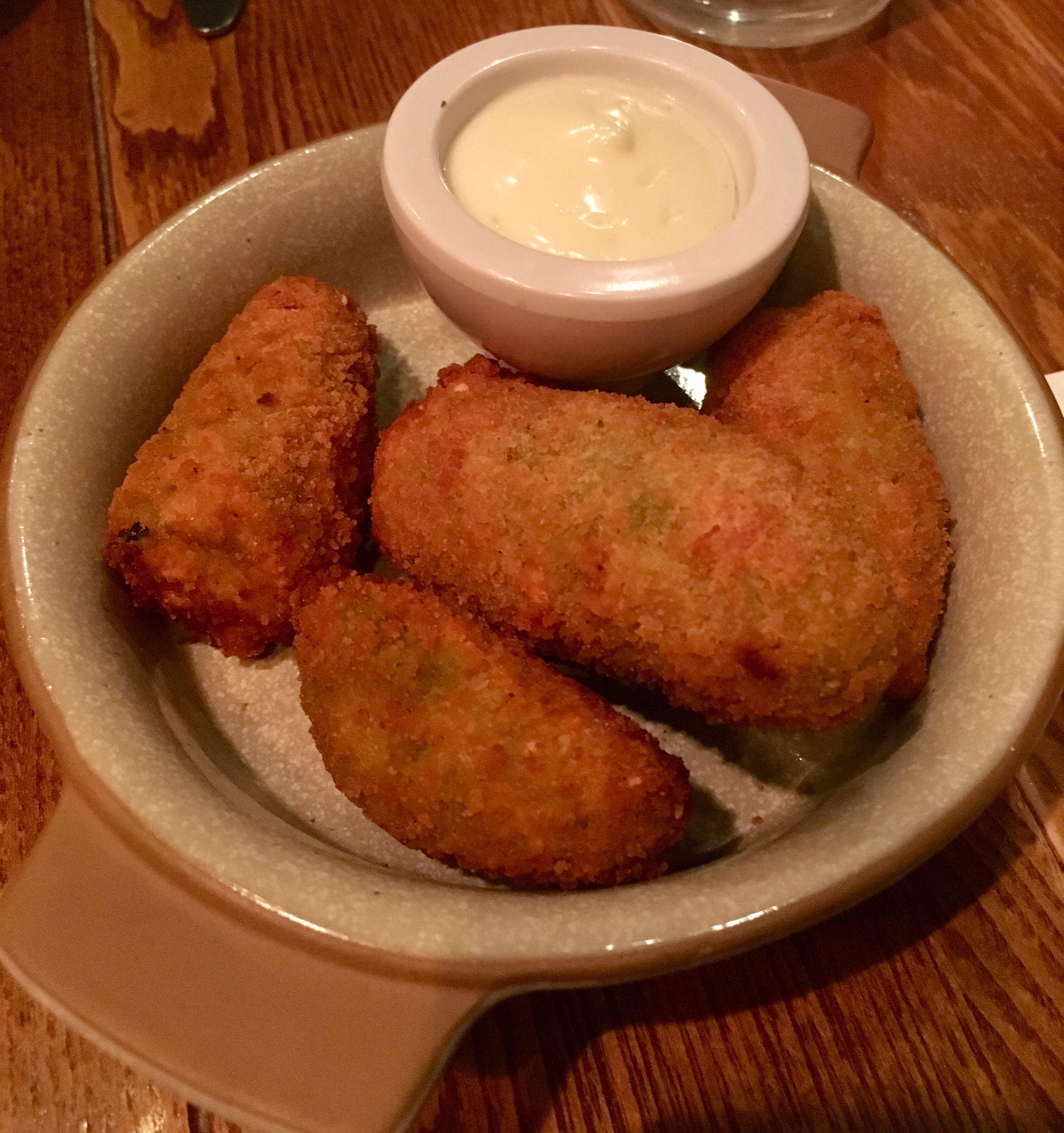 We shared some Jalapos (£5.25) alongside the burritos. These fried green jalapeño peppers are stuffed with cool cream cheese and coated in a crispy crumb. They’re not going to win any aesthetic awards, but they’re simple and spicy. I personally don’t like the creamy lime dip they come with so I enjoyed my half without it.

Other dishes ordered by our party included Chipotle Chicken Nachos (£5.25) loaded with all the good stuff, and Pulled Pork Tacos (£6.25). Despite the flavours being on point the pulled pork was a little on the dry side, especially compared to the beef in other dishes.

The tacos went down well although both people eating them commented on the rack they arrive in making it hard to remove the food without throwing half of it down yourself or across the table. 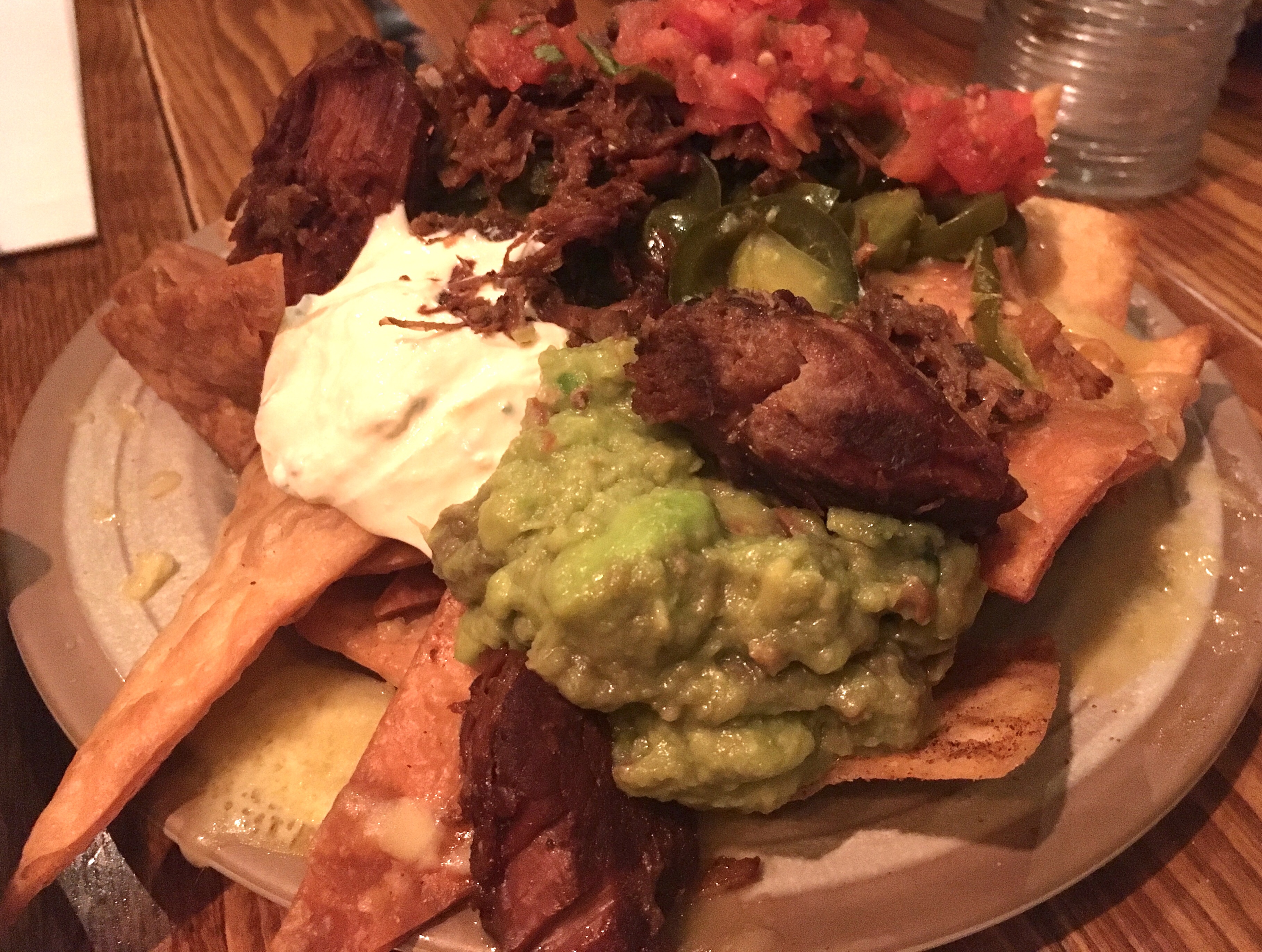 At some point a bowl of Coxinhas (£5.95) arrived which managed to confuse just about everyone. Described by our waitress as ‘like croquettes but Brazilian’ (there’s actual croquettes crying somewhere about that analogy) they looked boring, smelt bland and tasted like old scotch eggs. You can keep them, bab.

It isn’t everyone’s favourite venue for South American-style food – hell, some people positively hate the place it seems – but I’m a fan and we had another good experience. Minus the weird balls of boredom obviously. It’s decent value for money, the staff are always welcoming, and you leave full to bursting – happy days.

You can read more about Bodega and why I love it here. Don’t forget, if you have an Independent Birmingham card you can get 20% off all day Sunday.

Are you a fan of Bodega and the Bitters & Twisted venues? Let me know in the comments.

Disclosure: We paid in full. All opinions, photos and love for Alison are my own