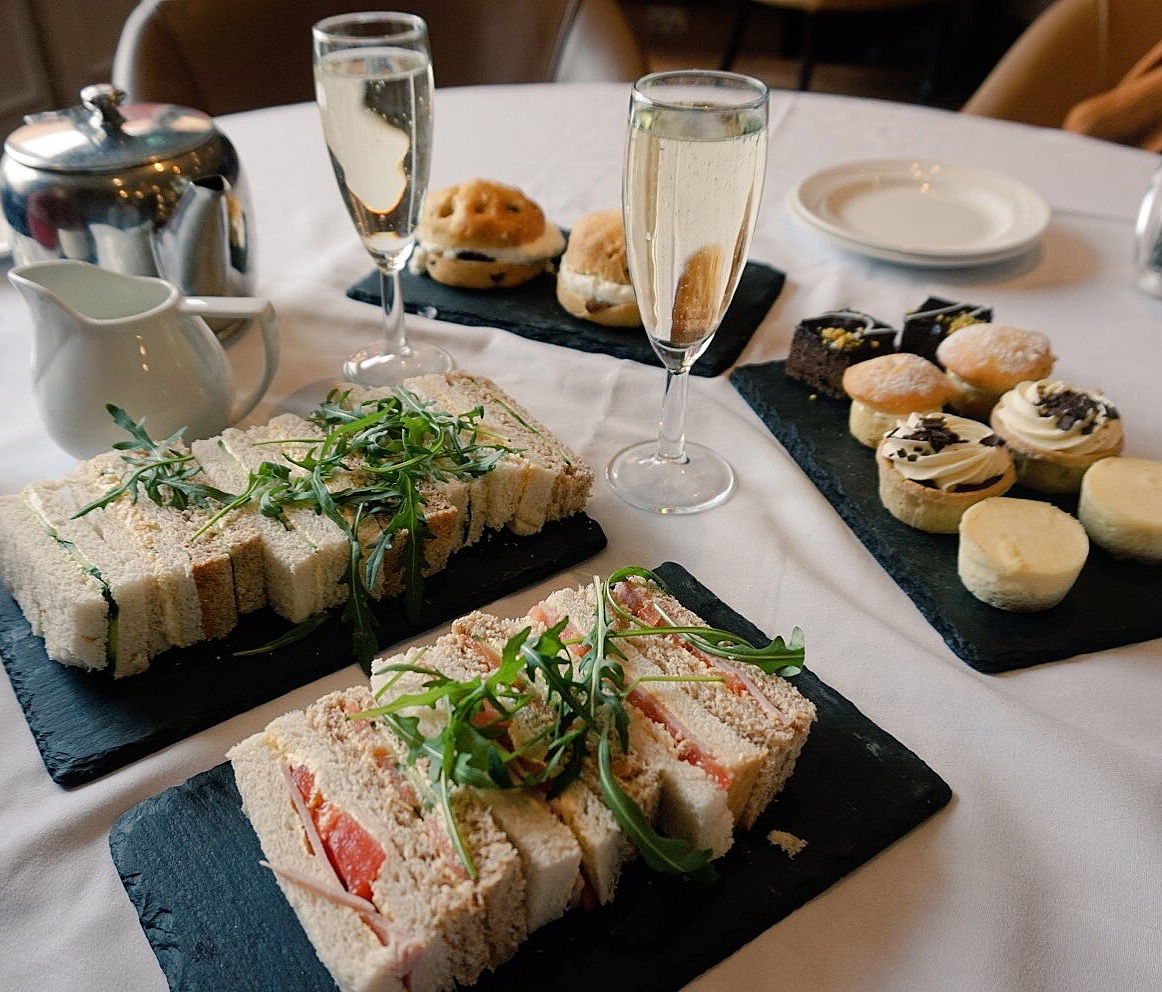 I recently treated my lovely mum to a spa day with afternoon tea at St John’s Hotel Solihull for her birthday.

Spending quality time with her is something I wish I could do more often, but with her being a hardworking nurse with a demanding shift pattern that’s not always possible. Knowing her love for both a pamper session and cake, I thought I’d combine the two and treat her to a relaxing day away from the hustle and bustle of the city.

I’d previously been to a wedding reception at the Solihull hotel, and remembered it for the lovely gardens and warm hospitality, so when I discovered they offered both afternoon tea and leisure facilities it seemed an ideal choice.

We arrived late morning, confirming our tea slot at reception before heading to the spa area. Champneys it ain’t, but you’ll find a decent sized indoor pool with a jacuzzi, steam room and sauna, as well as loungers to relax on. Apparently there’s also a gym but we left that, unsurprisingly, unexplored. 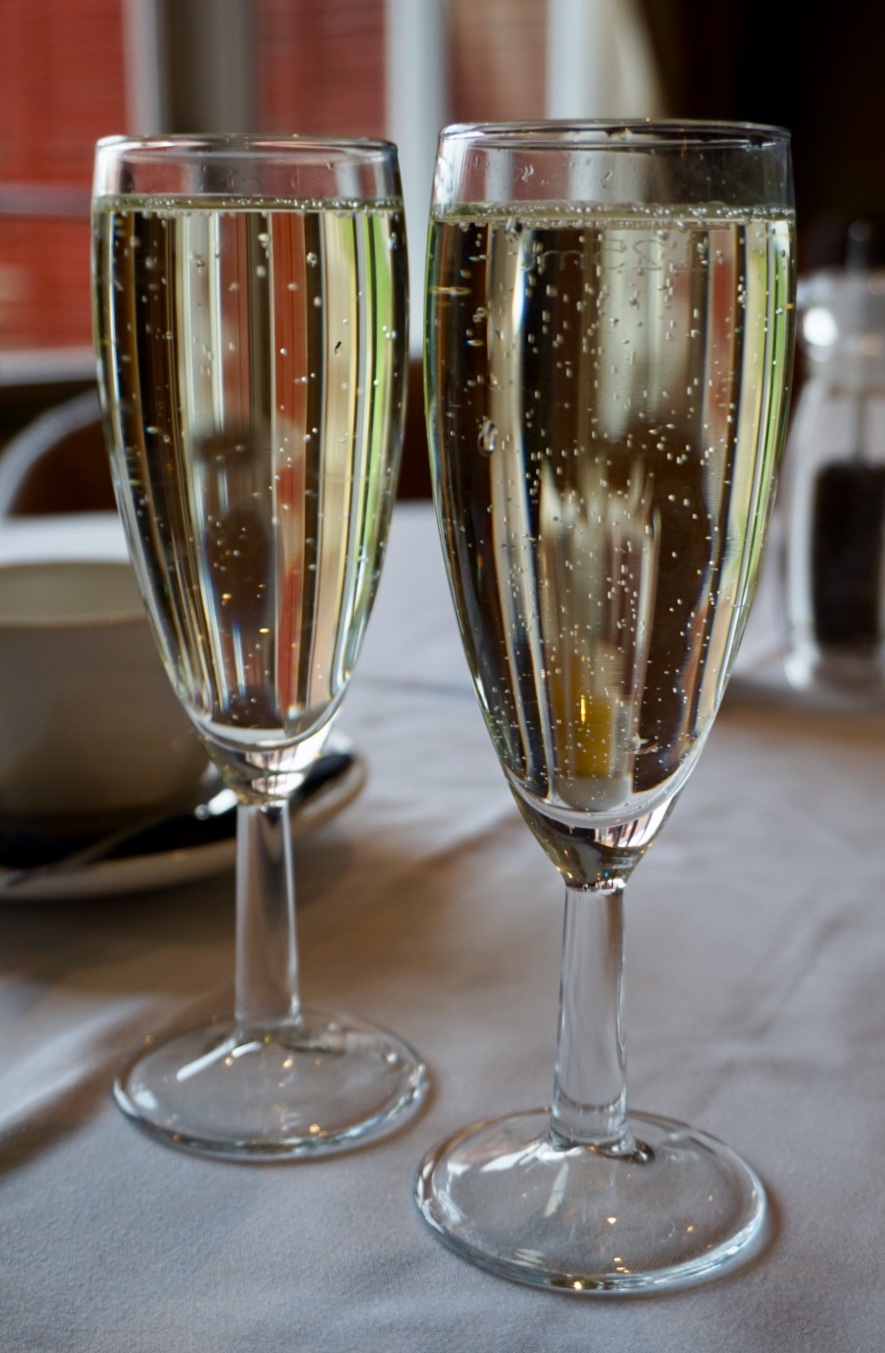 Our afternoon tea with champagne (£20pp) was served in the Tempus Bar, helpfully located next to the spa area. You can take this in the garden too, but being that it was snowing we opted to be next to a radiator.

The bar itself is contemporary in terms of decor but lacks anything memorable in terms of style. It was also lacking in atmosphere and noticeably very quiet, so much so that the bar staff frequently just vanished. More on that later.. 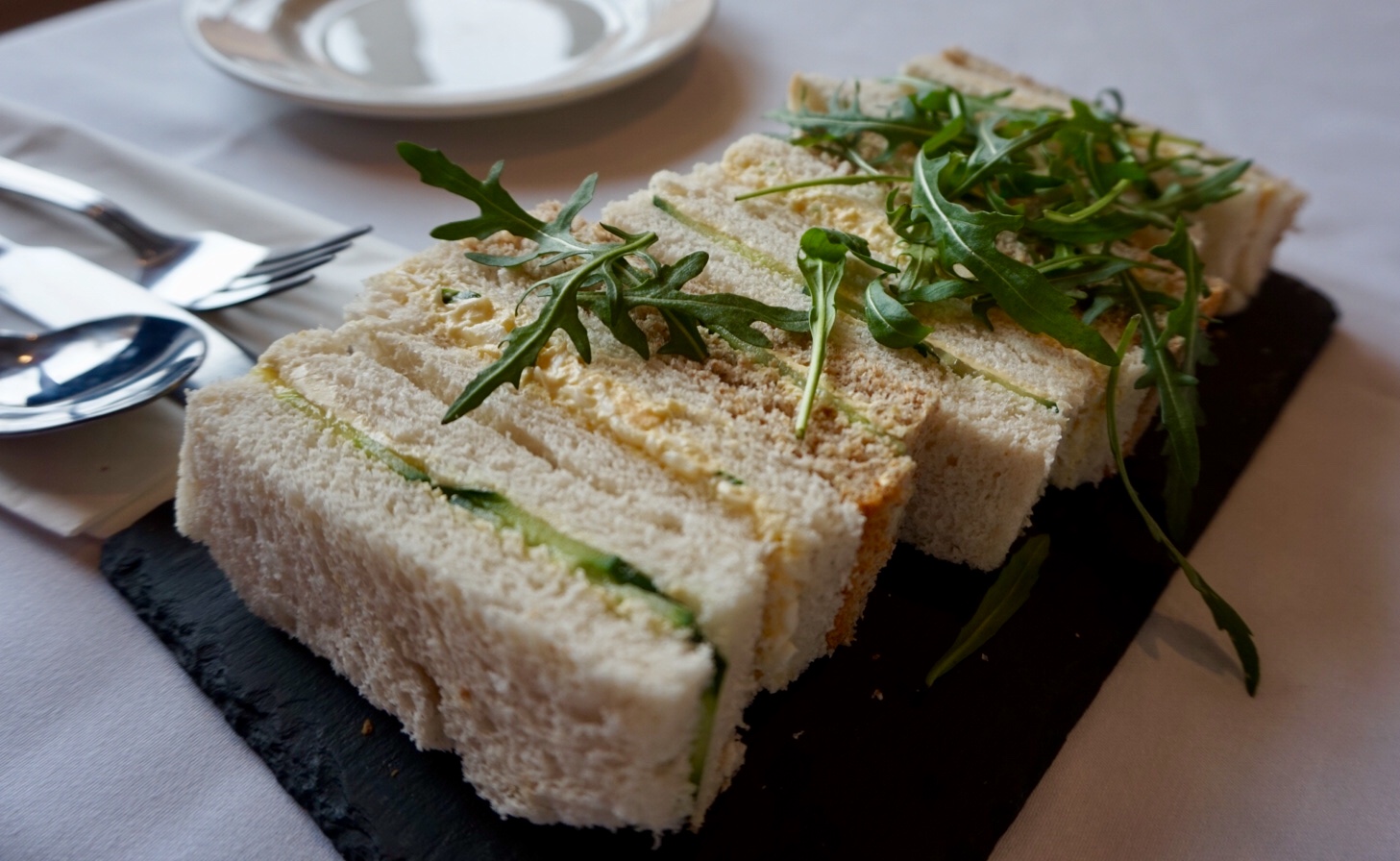 An array of sweet and savoury treats were served up on slate boards including neat finger sandwiches, fruit scones with cream, and a selection of mini cakes. There’s no shortage of food – realistically this lot could feed 3-4 easily – although the presentation left us both a bit underwhelmed. The mass-catering white cups and saucers didn’t look or feel particularly special, and I don’t enjoy eating from roof tiles as a rule. 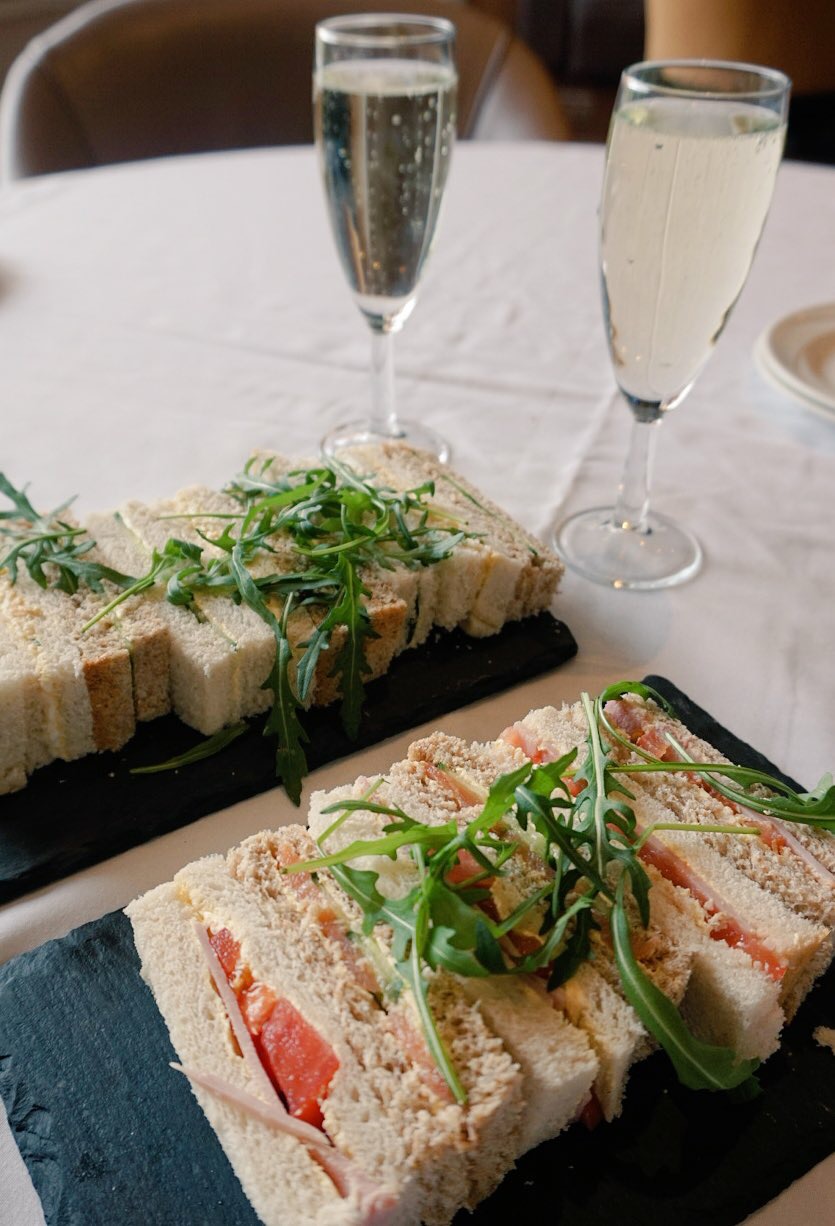 Mum delved straight into the savoury offerings; dainty looking fingers filled with cream cheese and cucumber, ham and tomato, smoked salmon, and egg and cress. The additional cheese and caramelised onion the menu promised never materialised; perhaps it was lost under the forest of depressed wilting rocket that we had to tackle before getting to the bread.

Freshly made and on the whole pleasant with familiar fillings, it was just a shame about the lack of attention to detail. Many of the fingers had random bits of crust left on which is plain lazy considering we were one of only two tables in the bar, and the restaurant was closed. 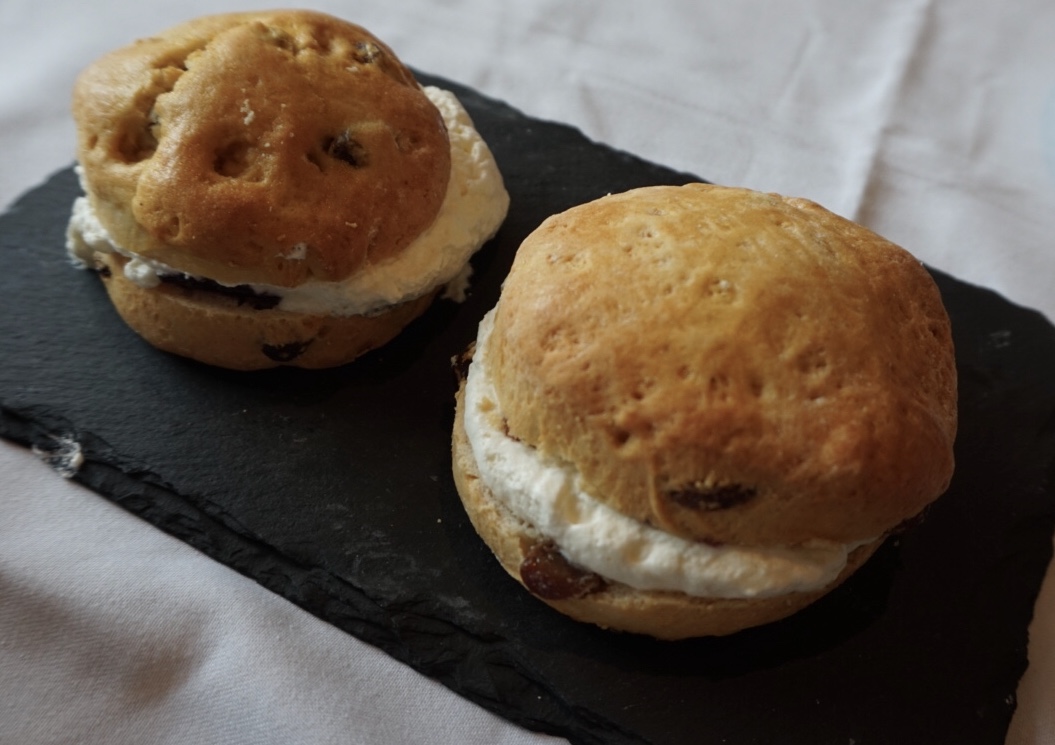 Two decent sized scones dotted with plump sultanas were served with a thick layer of whipped cream. Personally, I prefer clotted and I’d rather add the cream to scones myself rather than having it ready made (because I’m a grown up) but that’s a personal gripe, I suppose. I was also mildly bemused I had to actively seek jam for them, like some kind of preserve ninja.

Hitting the next sugar mountain in front of us, we found four offerings including mini Victoria sponges, lemon cheesecakes, chocolate slices, and caramel tarts. 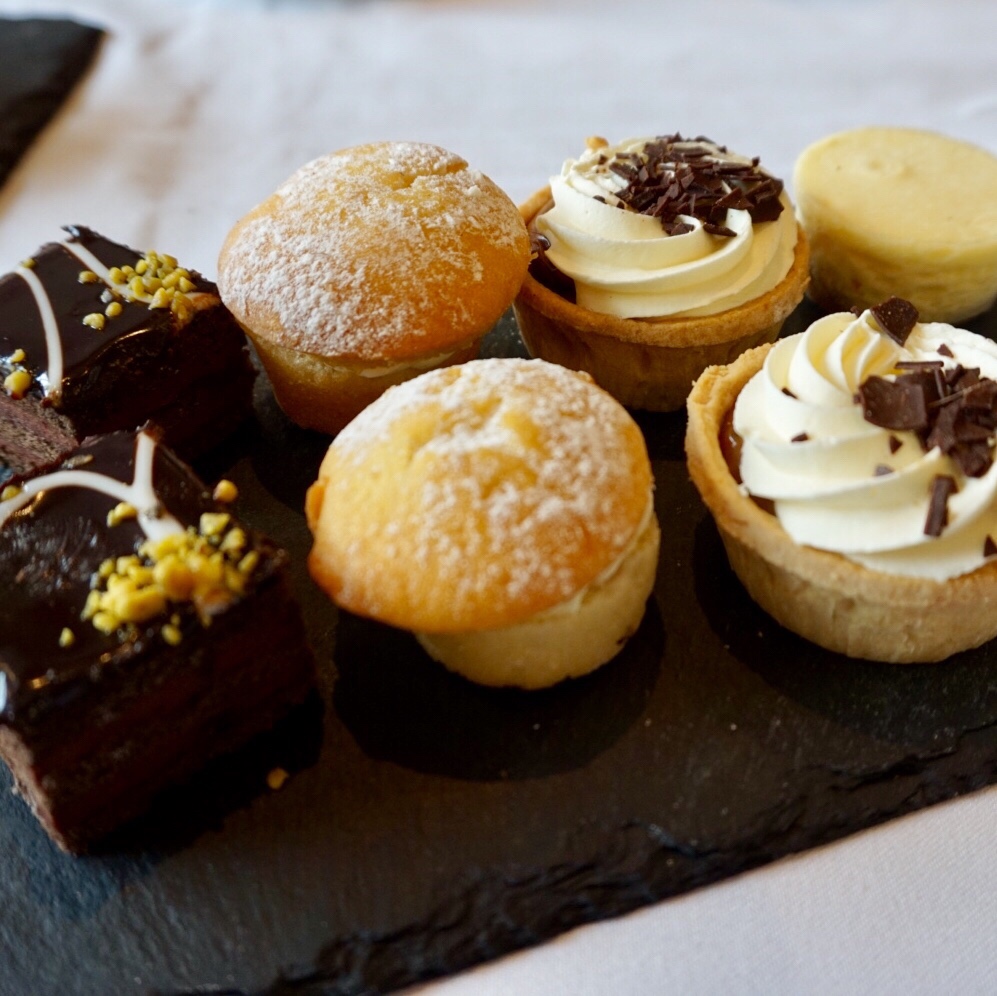 The latter was, by far, the star of the show and a truly delicious decadent mouthful, with a centre filled generously with a thick caramel sauce and a crisp, buttery base. I’d have happily swapped the overly sweet (yet somehow quite bland) chocolate slabs for more of these pastry tarts.

My main issue was the level of service. Which on the whole could best be described as haphazard. On arrival, despite me confirming the day before, the person running the bar area had no booking information for me. Nor did she seem that bothered about putting down her mobile phone to actually check.

Additionally, there was no follow up service once we’d been seated. No one asked us if we’d like more drinks or offered to refill the tea pot, and when I later ordered more fizz our bar man (who had taken over from phone-lover) disappeared for 15 minutes with no explanation at all. Eventually, being that no one was in or behind the bar, I asked reception for help. I was given a look that suggested this wasn’t the first time the baby faced bar man had gone AWOL.

We enjoyed our afternoon together overall despite a few gripes and, most importantly, my mum enjoyed her birthday treat. Mainly because I hid most of the above ridiculousness from her. The afternoon tea elements were pleasant enough and plentiful, although unlikely to win any awards for originality or aesthetics. Perhaps I’ve been spoilt by fancier offerings like AC Hotel – or staff that actually give a shit.

If you want AT with a twist try Malmaison or Bardolino in the city centre. The spa area is fine for a day visit and we enjoyed a few hours relaxing in and around the pool, but from my experience the lazy, uninterested hospitality staff really let this place down and I wouldn’t return.

Have you been to St John’s Hotel Solihull? Let me know in the comments what you thought.

Disclosure: I paid in full for the use of the spa and the fizzy afternoon tea. All words, photos and distain for droopy rocket are mine

Why are baths in the middle of the day so much better?

"There's a pair of shoes in the window."
"That's right, we do that because it's a shoe shop."

I’m just saying, itd be better if it was a film that didn't have the white saviour narrative, like..