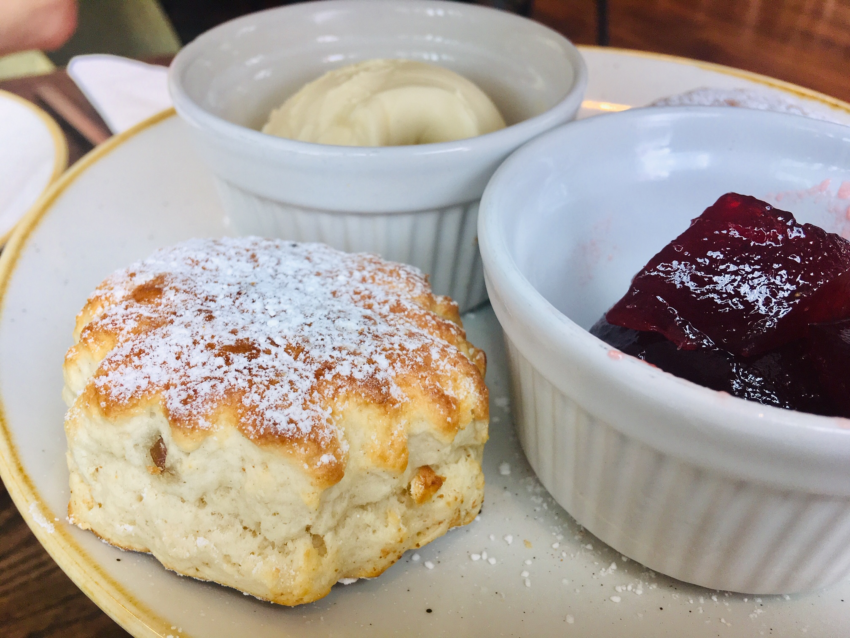 Recently I took my mum for afternoon tea in a building that a friend once referred to as “the one that looks a bit like a blue penis made from Lego.”

I know – lovely isn’t it? Hello and welcome to my award-winning food blog, where I take the most important woman in my life to eat mini sweet and savoury treats inside a make believe Lego wang. What a time to be alive for us all.

After picking Lovely Debs up from Grand Central (she didn’t drive this time, which if you read this post you’d know is probably a blessing) we took a short walk to the Radisson Blu, heading to the College restaurant found on the first floor. I’m not particularly familiar with this hotel, truth be told, and aside from previously visiting it for Birmingham Cocktail Weekend I can’t claim to know what the bedrooms are like or whether the view of our least attractive roundabout is something to behold from the top floor. The restaurant, however, is quite smart and colourful, although I suspect it would probably look better at night when all the spaceship-like lights come on. 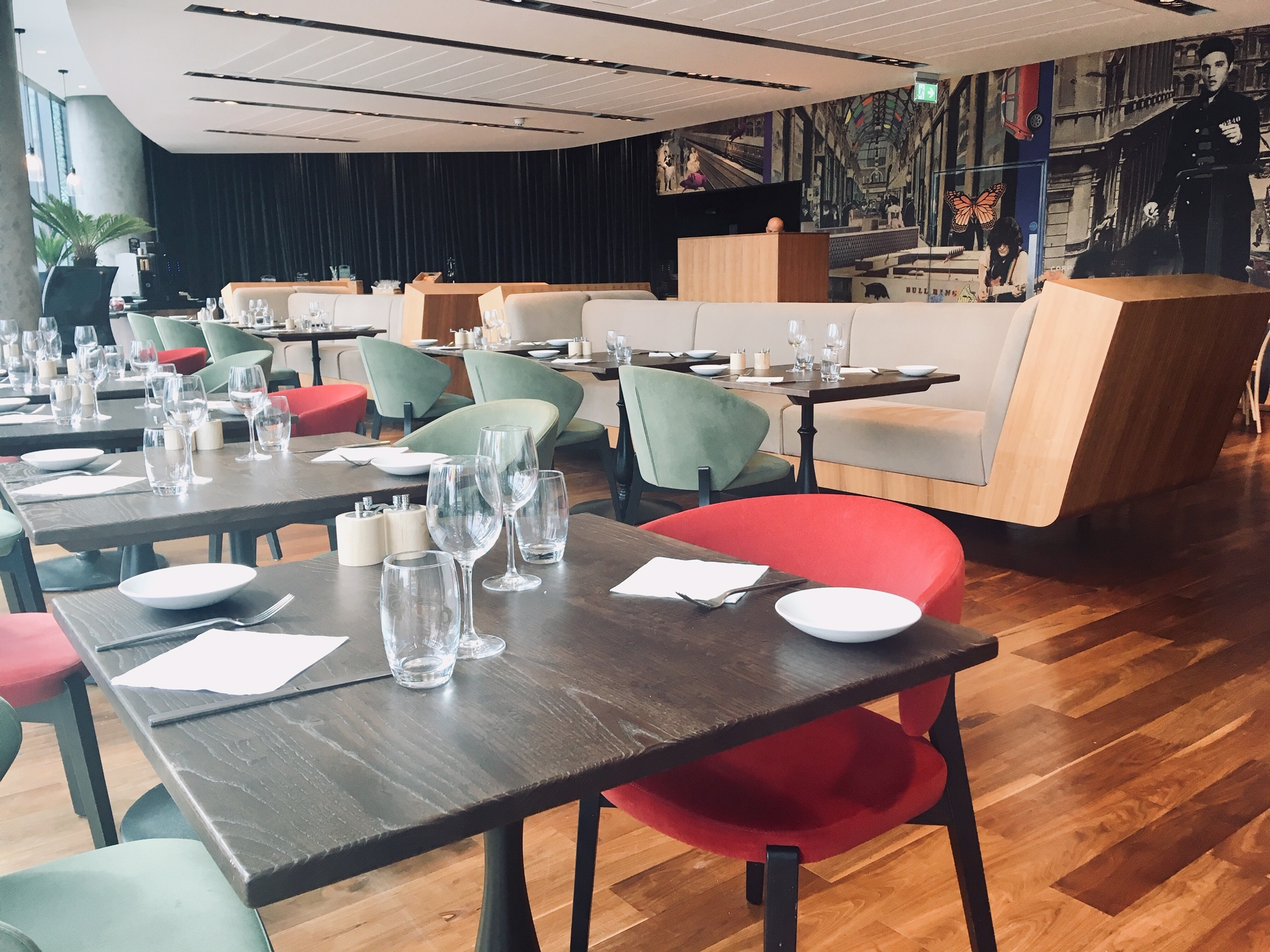 Our visit coincided with a recent wedding of one of my best friends, and my mum was keen to meet up and see some photos of the weekend. In a bid to keep things simple, and with the view that it needed to fit into a late afternoon schedule in central Brum, I stumbled across the hotel’s afternoon tea offering on social media. Being served on a mini picnic table it all looked a bit Instagram wanker silly, but cute enough an idea that I thought my mum would enjoy the Sylvanian Families (yes, I’m that old) aesthetic. 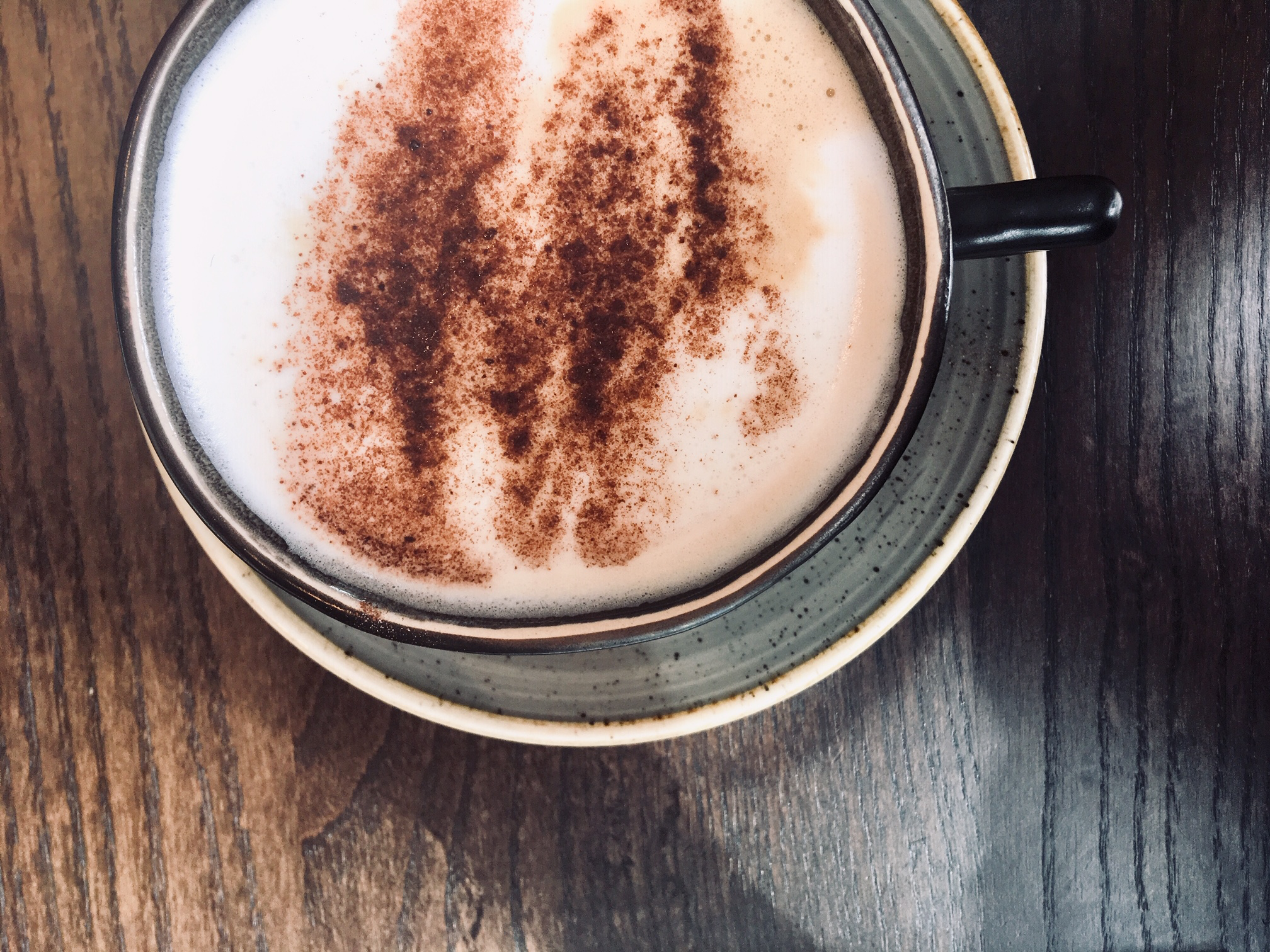 Upon being seated we were offered a choice of unlimited hot drinks (we chose a cappuccino and a tea, for anyone interested) and within minutes our highly anticipated ‘picnic table’ of muchables arrived. Except it wasn’t the advertised (on their own Instagram….) picnic table set up, it was your bog standard afternoon tea stand. And the mini filled rolls and intricate sugary treats looked a lot like kids party sandwiches and box bought bitesize desserts. My mum’s face said it all: underwhelming. “For such a modern looking hotel this is a really old fashioned high tea concept,” mum whispered. She ain’t wrong. 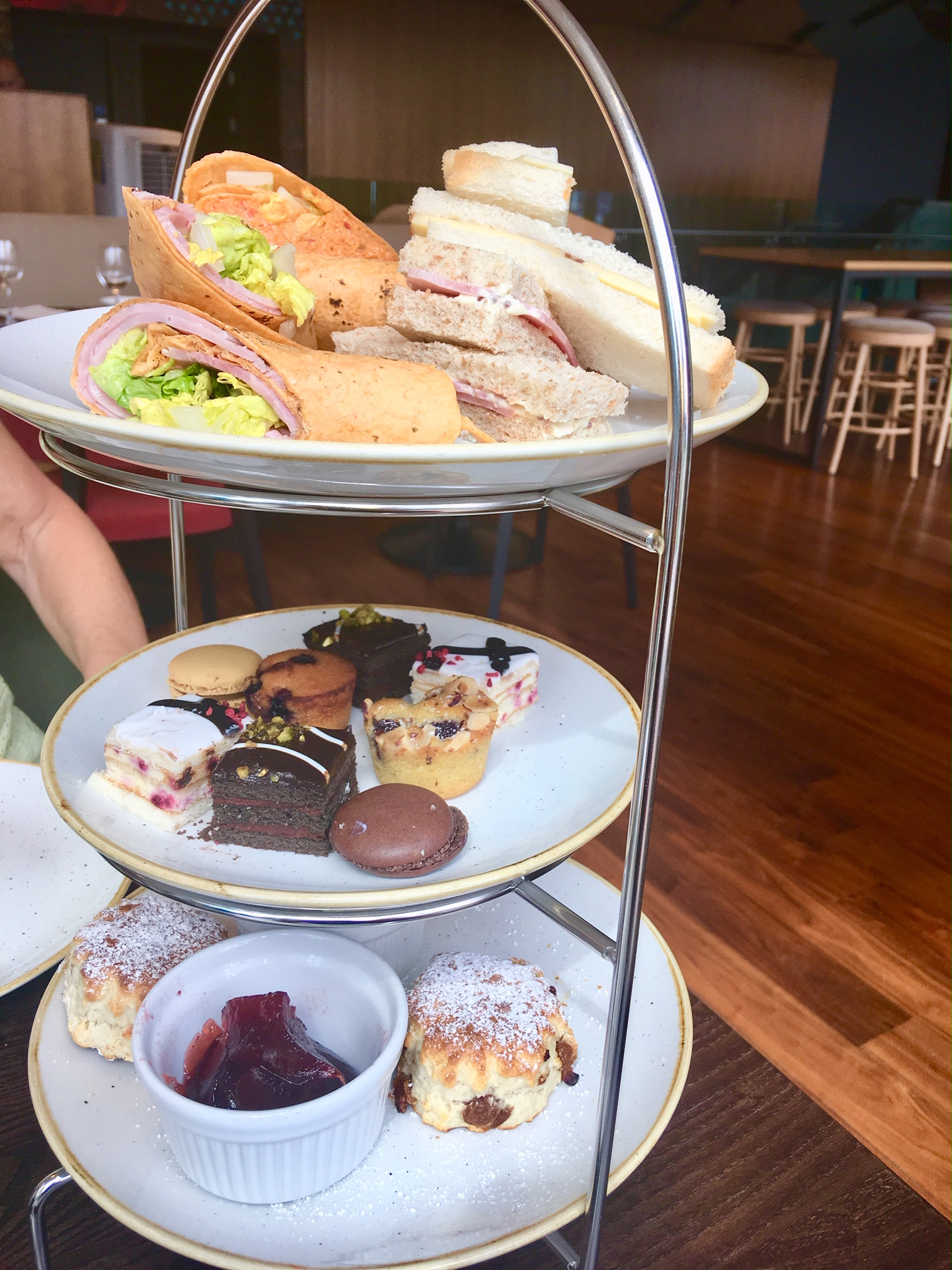 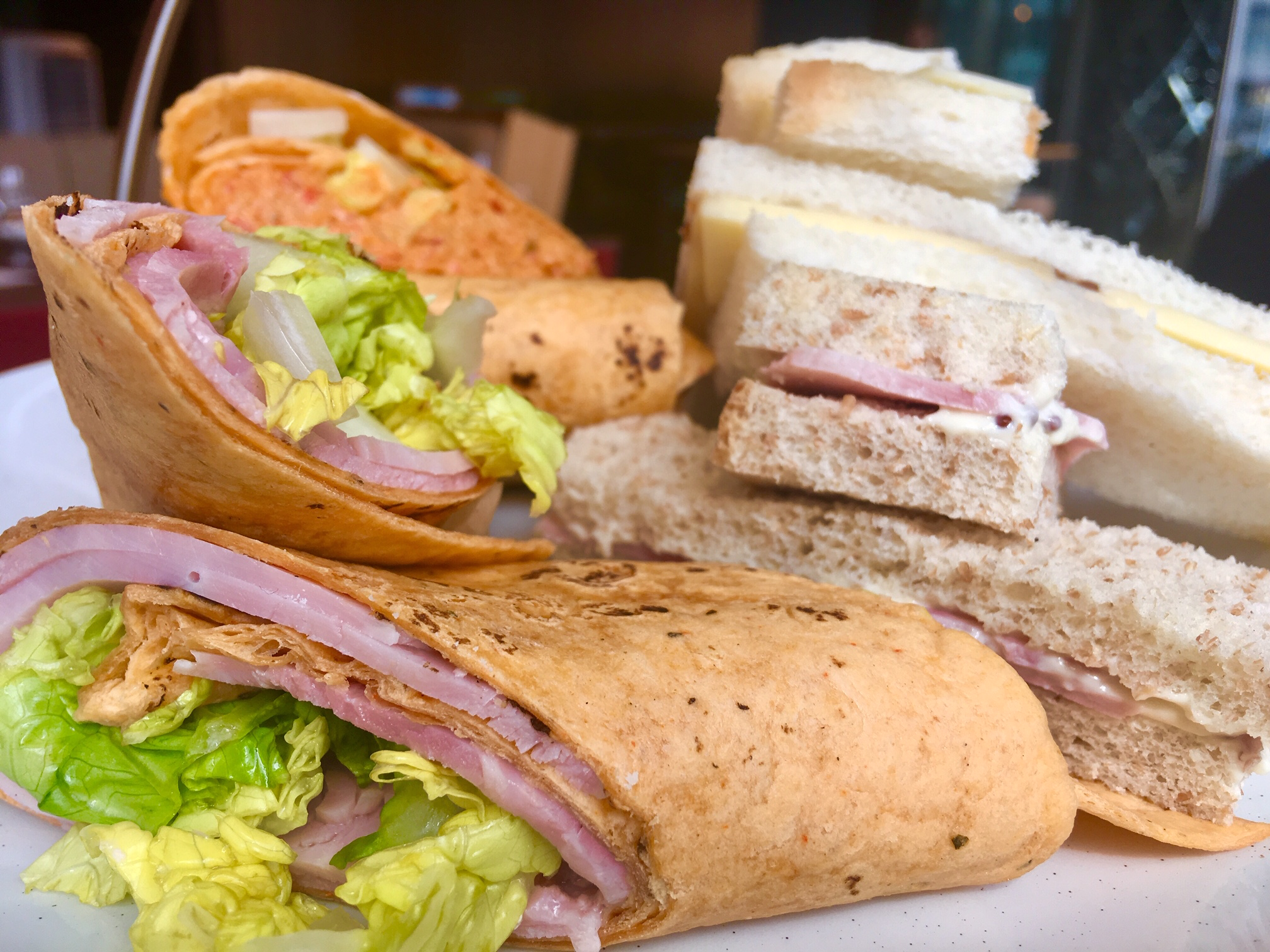 It didn’t get much better when we went to take our first sandwich only to find the bread was stale and rougher than me on the morning after my afore mentioned friend’s wedding. I’m assuming they make the sandwiches with left over cheap sliced white from the breakfast buffet, hence it being dried out. Alerting our waitress to our various disappointments she seemed somewhat unbothered (maybe she likes stale sandwiches with less personality than the roundabout in my eye-line) but dutifully replaced the sandwich layer. What arrived – some ham/hummus wraps and I expect most of the same sandwiches from the last plate – wasn’t much more exciting but was at least fresher. 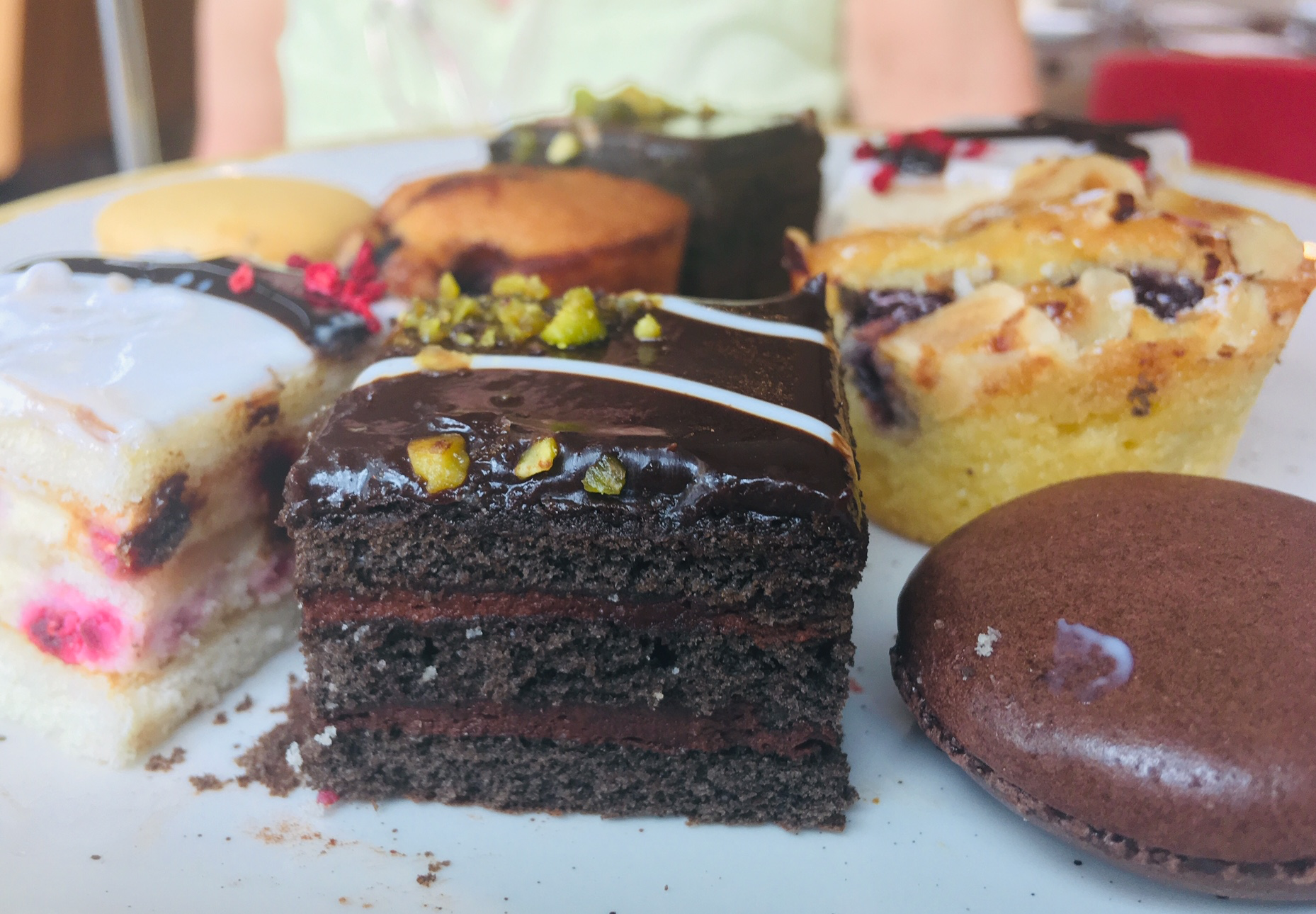 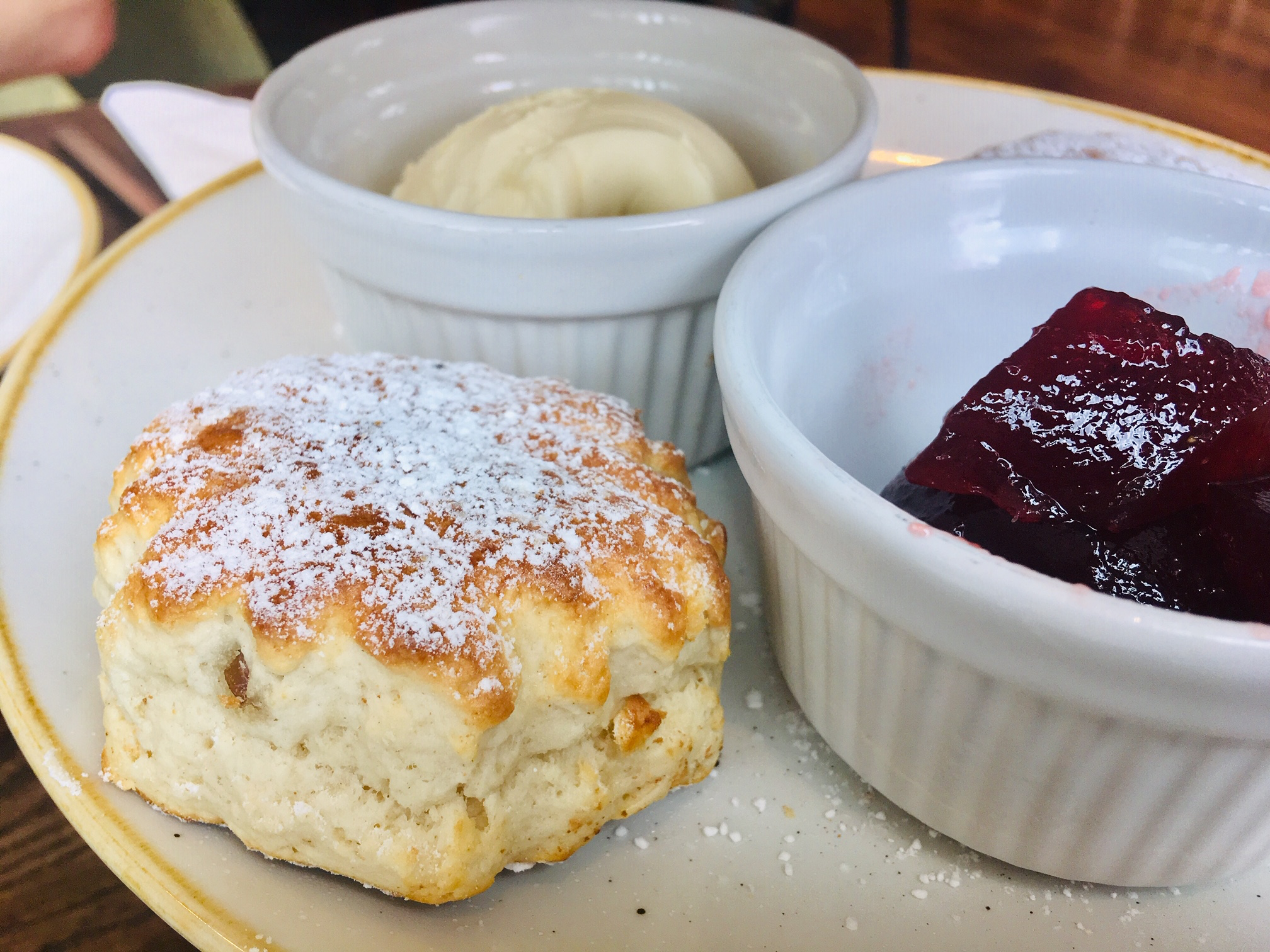 The feeling of meh continued into the sweet treats, with bland macarons and various uninteresting mouthfuls of tray cakes. I’d explain to you what they were but I personally couldn’t tell, and there was nothing/no one to hand to provide any clarity. Things appeared to improve a bit with a warm sultana scone that I slathered in clotted cream and strawberry jam. I put the cream on first because I like to upset people – don’t contact me about this with your jam v cream negativity. My mum’s scone was cold (how is that possible when mine was warm?!) and caused her to say, “I think it’s maybe a shop bought scone.” Le sigh. 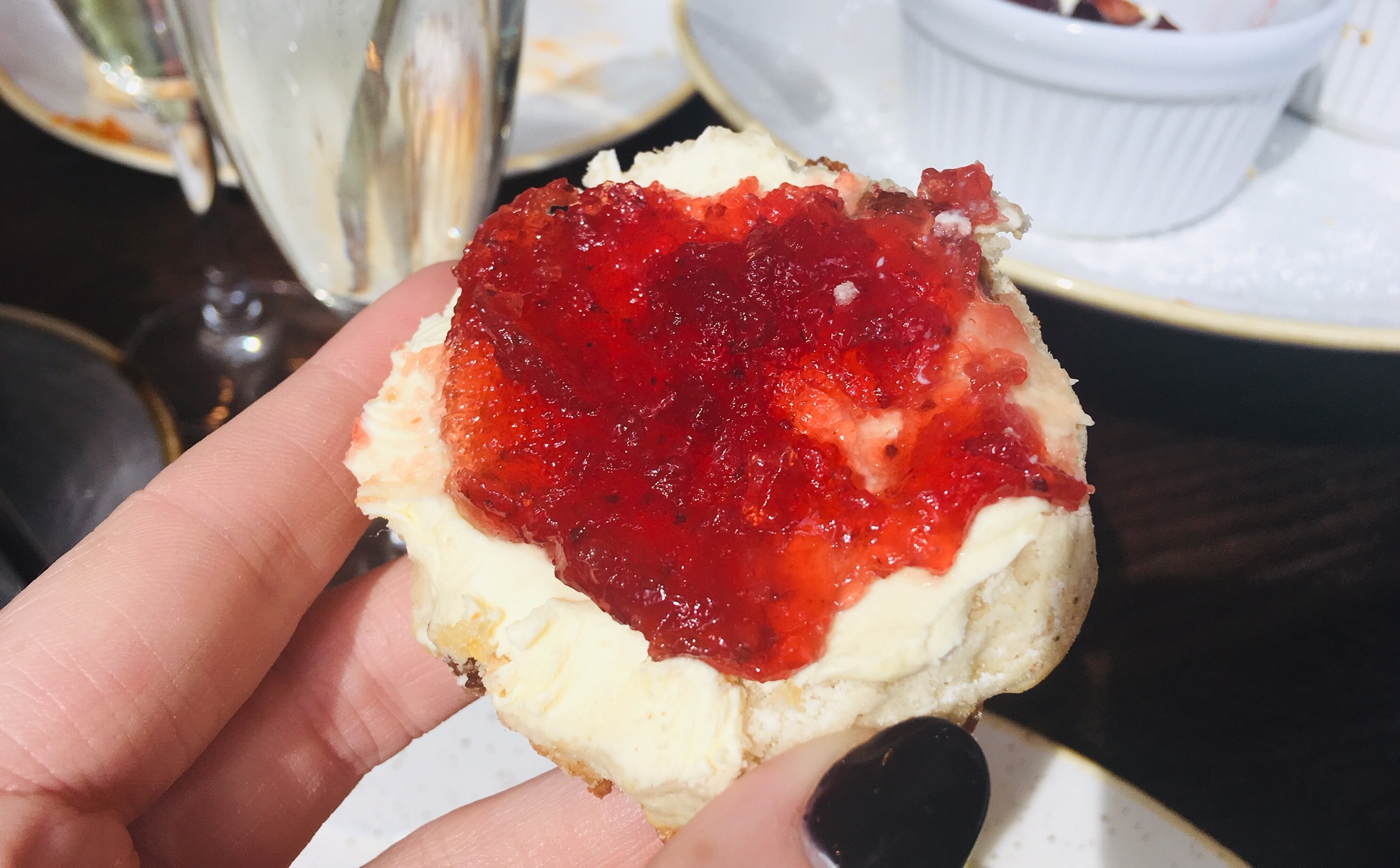 All in all the best word to describe this afternoon tea is underwhelming. Aside from the stale bread, the fillings were bland and the rest was… edible. While not expecting a key-change-stool-standing moment I was expecting something a bit more fun and creative, but it was beige and boring. The place was empty at 3pm and had no atmosphere or noise, apart from a Now That’s What I Call Crymaxing soundtrack and when a member of staff managed to smash a tray of crockery. We left quite a bit of food, polished off a glass of fizz (extra cost) and decided to go and get a bit drunk on happy hour cocktails at Opus instead.

This afternoon tea usually costs £17.95pp and a glass of prosecco can be added at an additional £5pp if you fancy being a lush on a weekday afternoon. Be aware you need to book in advance over the phone and that took me an annoyingly long time, being passed from reception to the restaurant and back again about 3 times. I guess if you want to be treated like a rock star from start to finish just cough up the extra fun coupons and go spend your afternoon in The Edgbaston – their AT offering is beyond lovely and they don’t play the best of Lee Ryan.

I try to end on a high rather than a negative so.. nice toilets. Fair play.

Disclosure: I paid for the food and drink. All opinions, words and photos are mine, apart from that of my aforementioned Lego-loving friend who probably needs glasses or a sex therapist.

Now I’ve finally stopped feeling like my brain i

Oh hi! Is that a new bottle shop in Great Western

Happy hump day. Here’s a photo of a sandwich I b

Have you discovered @blowwater.co yet? Recently op

This week’s #throwbackthursday is going to this

ad| Have you visited the beautiful @poli_nations g

Daydreaming of the scallop ceviche I had for lunch

Throwback Thursday is going to this colourful, tas

Throwback to my first try of @vinotecawinefood bac

ad | If you’re looking for fun experiences in an

And that’s a wrap on August. A month of birthd

What a glorious @ichoosemag this week!

Can’t wait for the Conservative’s conference to roll into Birmingham next week. Sure it’s going to be absolutely lovely for them and not at all a bin fire. I’m sure having big branded white tents in the middle of a public space is going to go super well for them. Yup.

The pound hitting new record lows, mortgage products being pulled, the IMF saying this is dog shit and an emergency intervention from Bank of England… in less than a week. When Liz Truss said she was going to “deliver, deliver, deliver” we really should’ve asked for specifics 🫠

You’re only gaslighting yourself now, boo 🤡