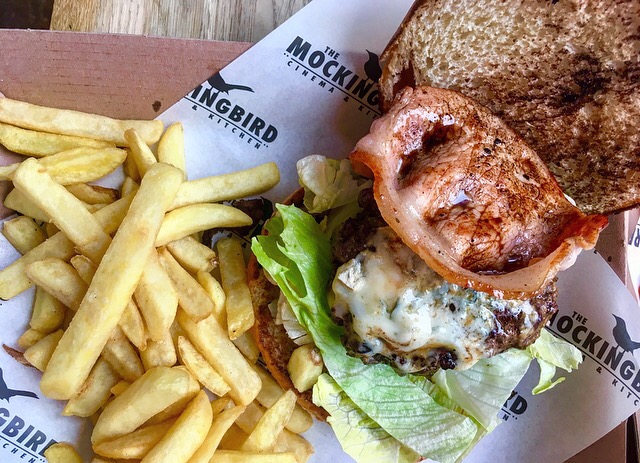 I’ve written and deleted the opening of this blog post so many times now, but I’ve decided to just post a blow-by-blow account of my recent visit to Mockingbird Cinema & Kitchen.

I have to be honest from the get go and say this may be a long (and painful) read and is a blog I’ve been quite sad to post, but let’s just dive straight in..

Having recently attended a theme night at the small cinema within Mockingbird – and seeing a delicious array of dishes being delivered around me in the bar area before the film – I was really looking forward to my return visit. This time as well as watching a film (in this case the quote-tastic Mean Girls) I was also finally getting to try the grub I had seen and heard so much about.

With the film showing at 8:40 I booked a table for 7:00, at the advice of the staff at Mockingbird, with the view that food was served until 7:30. Arriving on time, the seating area outside the venue was quite busy but the bar inside was quiet. Despite 3-4 members of staff being by/behind the bar, we were left standing drinkless while they watched another member of staff do magic tricks. Eventually we were able to order our drinks, although when the two halves of lager were placed on the bar one glass was noticeably much bigger. Despite the member of staff pointing it out, commenting on it and laughing about it (?!) no effort was made to correct it. It all felt a bit shambolic and confused – to be honest the beginning of the evening basically sums up how the rest of the night panned out.

We were pointed in the direction of our table and I asked for a menu, aware that we should order before 7:30. Without being given any inclination of what food was available I was asked if I would be having a hot dog (as if I’d missed a memo on such an option) before being provided with a menu, about five minutes after being seated. Deciding on the Buttermilk Fried Chicken (£10) and the Pig & Blue Cheese Burger (£8) we put the slightly odd start to one side and eagerly awaited the food.

Enjoying our first try of the Mockingbird lager (a light, crisp beer; good for summer sessions) we were both looking forward to washing our meals down with our beers. Having seen pictures on the venue’s Instagram I was excited to take a bite of my big juicy burger, and my dining partner (who had chosen the fried chicken at the recommendation of our host) couldn’t wait to devour the crispy meat. Half an hour in the food finally arrived – as did the disappointment.

First impressions of both dishes were pretty bad. I’m not a food snob at all – in fact I pride myself of loving food in all guises – but both meals looked unappealing and like no care or attention had been applied at any point during their creation.

Immediately it was obvious the chicken was overcooked, and the burger itself was dwarfed by the bun; hardly the big juicy beef patty I’d been expecting. The menu states that all burgers come ‘pink’ unless you ask for well done but I got the latter without asking. Not only that, but what was left was a dry, bland, overcooked mini burger. Despite both of us trying it, we left half of the meat and most of the (one piece of) bacon, which was undercooked and covered in pools of a brown watery grease. It’s like it had been boiled not grilled.

The smear of Gorgonzola was quite tasty but in such small supply it may as well have been removed completely. No one likes being left short changed when it comes to burger toppings; either offer what you set out on your stall or don’t bother.

Both sets of chips came as a reasonable portion but were unseasoned (with no salt available on the tables) and the sweet potato fries felt slightly undercooked; quite ironic being that they nestled a piece of chicken so over fried it might have been better used as a frisbee.

A day later I’m also still absolutely baffled as to why the chicken was recommended. Rather than a thick breast of flavoursome buttermilk marinaded chicken (as one would expect for the price) we received a wafer thin super-spicy disc that managed to be both soggy and burnt.. I don’t even know how that’s possible, to be honest. The outer ‘crust’ was sticky in parts whilst literally rock hard and breakable in others, leaving me wondering if it had been leftover from earlier in the day and refried.

We also realised neither meal had the slaw side that the menu promised, and when I asked where it was I was simply told there was no more available. That might have been helpful to know during the ordering process – a thought shared by the table next to us who were having an equally shambolic dining experience. Aside from the missing part of the meal, I couldn’t help but feel it was both cheeky and dishonest on their part to simply pretend the meal was ‘as it should be’ rather than just admit the problem and fix/change it. We were offered a drink to compensate for the lacking slaw but by that point I was sort of over the whole thing and just wanted to watch the film.

Both meals were pretty woeful, but it seemed we weren’t alone. The girls on the table next to us were having similar issues: missing pulled pork (from a burger thats second listed ingredient is pulled bloody pork); missing rice and cheese from a burrito; missing slaw from, well, everything. But at least the big group of girls on the hen party were enjoying their food – after all, we were told them changing their food orders was the reason for our meals being so poor sigh

If you can’t provide what you’re offering – for whichever of the 3 reasons we were given over the visit – it’s unfair to just deliver a substandard version and act like nothing is wrong. I let staff know the food wasn’t as described or desired, several times to be fair, but aside from being offered half a pint it felt like there was no effort to rectify or impress. The kitchen was closed at 7:30 and I assume that meant we could just put up or bugger off; we certainly weren’t offered a replacement.

Being that half of the food was left untouched we ended up entering the cinema at 8:30 hungry, but thankfully a large bag of popcorn (purchased in-house) kept us going through the film.

I found the entire experience from start to finish utterly baffling. I’m a huge supporter of independent businesses and as an ex-Custard Factory dweller I’m fond of that area of town, but what faced me last week left me feeling jaded and disappointed. Having seen other people eating food there before, not to mention a plethora of enthusiastic social media posts raving about the food, I want to believe that what happened on Saturday was just an off day for Mockingbird. It’s unfortunate and these things do happen from time to time, however the food was so poor that I doubt I’ll be making another trip to find out if it was indeed a one-off. Unfortunately consistency is key when it comes to securing repeat custom, and there are plenty of pubs and bars within a 5 minute walk from there doing bigger and better for less.

On the plus side, the film and overall ‘small cinema’ experience was enjoyable and the atmosphere was great. The cinema actually has quite a decent capacity and the venue offers cult classics, new movies and even film marathons from time to time. New for summer 2017, a series of outdoor cinema screenings will also be held during August, so if you like a quirky movie experience that may be a good evening out. The bar is also a pretty good size and has some great beers available on draft (as well as bottles), plus there’s outside seating which will be lovely on warm summer evenings.

I feel genuinely sad writing this review, and I truly hope my experience was a naff fluke. There’s nothing worse than feeling disappointed, especially when you want so badly for something to be wonderful, but there’s no other word to describe my food experience with Mockingbird.

Have you eaten at Mockingbird Cinema? What did you think? Let me know in the comments.

Disclaimer: I was invited to review the food and Mean Girls Movie Party in return for an honest blog post (something I’m certain they will no longer wish they’d asked for) about the experience. The food was complimentary – which is just as well as I probably would’ve asked for a refund had I paid for it