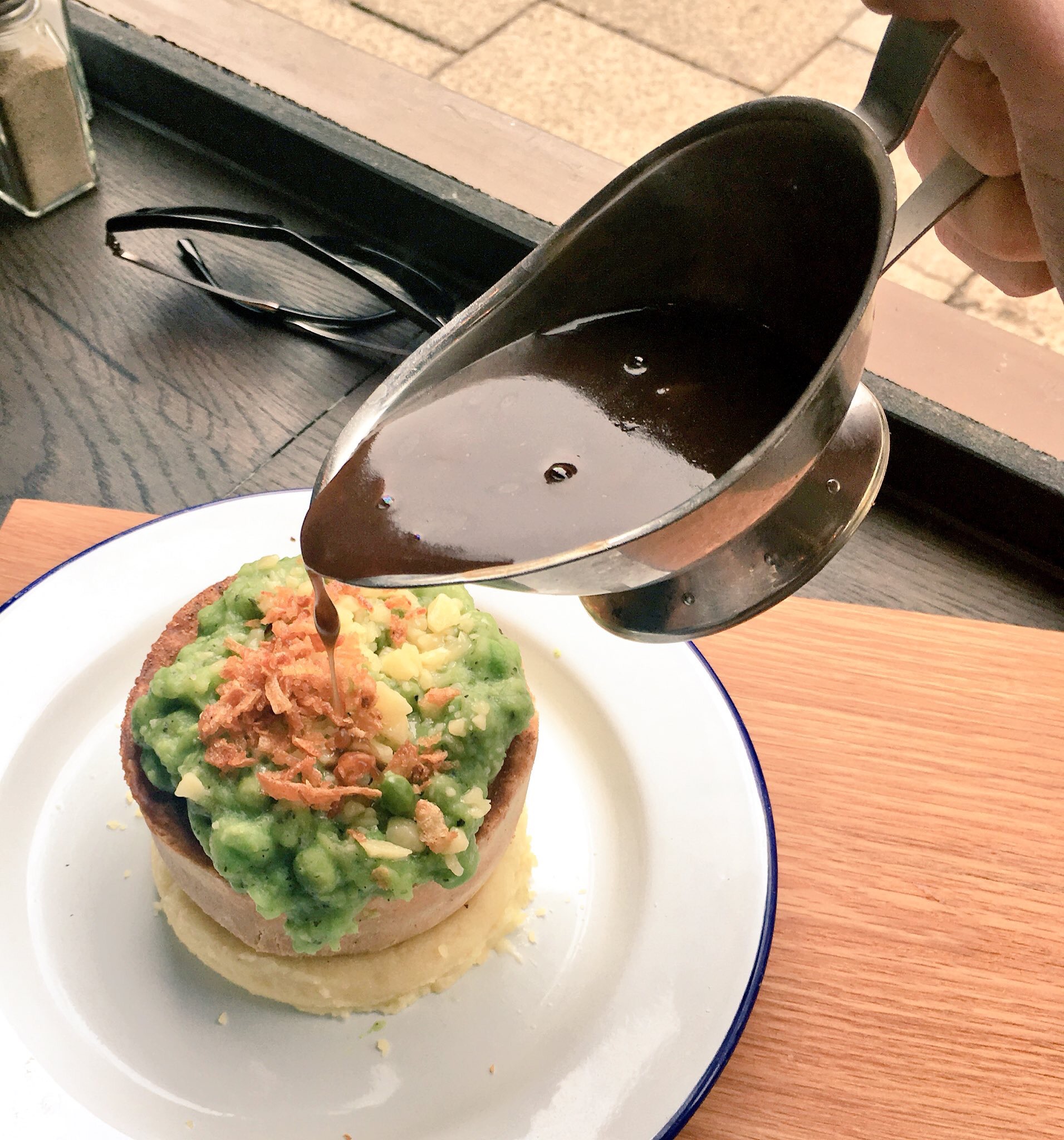 Friday wasn’t really my finest hour, by Pieminister came to my rescue. After spending the previous night at Bourne & Co sampling cocktails (so.many.cocktails) I awoke on Friday morning feeling anything less than peachy.

Despite having a full day of work ahead of me I was in vaguely good spirits, mainly because of the Brum arrival of Pieminister.

And so on Friday lunchtime I visited Pieminister on Waterloo Street for the first time. Arriving at lunchtime, the place was busy without being overcrowded and I bagged a seat for one in the window overlooking Purecraft Bar and the museum.

The venue itself isn’t as big as I’d imagined but it’s got a great modern urban feel and plenty of seating options to accommodate most group sizes.

I was greeted by a friendly server who seated me and explained the lunch menu before taking my order. I assume the main menu for the evening is much the same without the lunchtime price tag.

Being a massive cheese fiend, I opted for the Moo & Blue which combined beef and Stilton and chose to make my meal The Mothership (£8). Instead of just coming with mash, this upgraded meal gives you minted mushy peas, gravy, crispy onions and a sprinkle of cheese.

I was delighted when the plate arrived after less than 10 minutes, and the food looked delicious. Instead of the peas being a side dish they were on top of the pie, which altogether sat on a bed of mash. The cute individual gravy boat was a really nice touch.

First impressions the dish smelled and looked grand, and digging in I enjoyed the creaminess of the mash. I would have liked more potato if I’m honest, but I’m a right greedy mare (especially when I’m a bit hungover).

The https://cpsych.org.uk/z-pak-360/ minted mushy peas lacked the minty punch I was hoping for, but they worked in combination with the added cheddar sprinkles and crispy slithers of onion.

Now, the main event: the pie. A shortcrust pastry pie, it had a nice crispy finish and was fairly sturdy despite being smothered in mushy peas. The beef inside was moist and tender, and the blue cheese flavour was delicate but savoury and tasty. It would’ve been nice to see more filling in the pie, however, being so rich it was perfectly adequate.

Despite my initial worry that the meal looked perhaps a little on the small side (I’m used to ridiculous pie portions at home) there was more than enough flavour and stodge to ensure I was satisfied in terms of taste and my belly. My only real gripe would be that the gravy, whilst plentiful, potentially lacked the homemade meaty flavour one might hope for. It’s not a bad gravy, it’s just not particularly life changing either.

Despite my server’s calm demeaner, I got the impression (from watching the other members of the team running around like lunatics) there was clearly some sort of ‘organised chaos’ situation occurring backstage. They were smiling through it and covering it up very well though, so fair play to them all.

I have no doubt that Pieminister will be a hit, especially with its proximity to a popular craft ale bar. And as you can guess, it sorted my hangover right out.

Disclosure: I paid in full for the meal. All photos and words are mine, as is this hangover that won’t go.