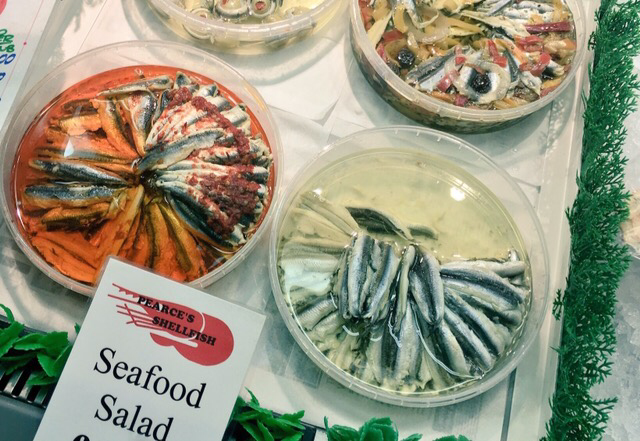 Just a quick post tonight to give a little bit of love back to Birmingham’s Indoor Markets; in particular the fresh fish counters and the top folk who work behind them.

I was running some errands in the area and (after being hit with the familiar whiff the building tends to radiate) it occurred me that I couldn’t remember that last time I’d bought fish or meat from the plethora of counters that fill up half of the market.

When I first moved to Birmingham and had a very low income (not to say that element of my life has much improved, haha) I frequently used to grab some of my supplies from the Birmingham Indoor Markets, and inparticular was always impressed with the variety and price of the seafood and fish available. Having been to university in Leicester – which has a MASSIVE market in the city centre – I’d been used to sacking off Tesco in favour of the local markets. This was partly because it was cheaper (and I secretly liked haggling with bolshy men) but also because it felt good to support local.

I still feel this way now, and whether it’s buying food at a market or enjoying prepared meals in cafes, bars and restaurants, if the choice is there I’ll try and pick local. It’s really depressing when you see how much of the high street we all took for granted growing up has now vanished – local butchers, bakers, pubs.. the list goes on.

So when given the opportunity today to have a quick mooch around the Birmingham Indoor Market’s seafood and fish counters, I was quite pleased to see the area bustling with loyal shoppers. The guys behind the counters were all shouting out the offers and deals they had available, and it was nice to hear them having banter across the paths that divide them.

It felt like there was still something traditional and honest about the place, which isn’t something I tend to feel when being shafted in Sainsbury’s over the price of pollock..

Anyway, I took a few snaps of some of the yummy seafood, crustaceans and fish I came across so I’m sharing them with you guys. I’ve come away with lots of ideas and intend on making a trip next week to try some of this. The freshly cooked crab especially looked fabulous, and for £5 (2 for £9) it’s way cheaper than any supermarket.

Do you think we should be trying to support local more?

Are we too enamoured with convenience?

Let me know in the comments.