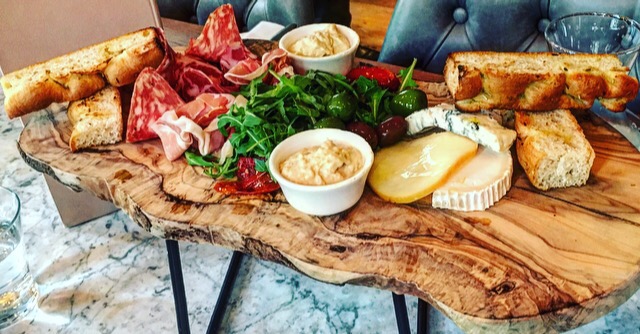 Having been invited to attend the intimate blogger evening to try out the latest seasonal additions to the menu, I was excited to return to Gusto Birmingham; a restaurant I’d enjoyed several times when it first opened back in September 2016.

Found on Colmore Row – where new bars and restaurants currently seem to pop up faster than the spring daffodils – I’d class Gusto Birmingham as a chic but non-intimidating offering. Chances are you would be just as at home there after work with a loosened tie as you would be for a nice family lunch.

Part of the popular UK wide Gusto brand, I knew from my previous visits the Brum set up included intimate dining spaces ideal for first dates and larger tables for groups, as well as a small bar area for lighter bites.

I arrived expecting a similar dining experience and food quality to pre-Christmas – and there begins my story. Sit down and grab a brew, this could take a while..

On arriving at the venue, I was reminded that Gusto Birmingham is tastefully decorated and has the USP of offering a light, airy space during the day (thanks to the wall to walk windows at the front of the restaurant) and a romantic, relaxing vibe during the evening.

The exposed brick is also a delightful reminder that you’re dining in a piece of Brum history (The Grand is undoubtedly one of the most iconic buildings in the city, after all) and the artwork adorning the walls and indoor trees provide subtle talking points.

Initially seated in the snug bar area, I was given a colourful cocktail to sip as we waited for the start of the taster menu to be delivered. Choosing the cherry sour, it was a short and strong (just the way I like ‘em) vodka-based tipple that was both sweet and sharp.

There were long and frozen cocktails also available which all looked summery and were presented with finesse. Lots of surrounding customers appeared to be enjoying the cocktails too, and the main menu has a well thought out selection. A good start…

Soon after a sharing platter adorned with cured meats, olives, cheeses and bread arrived. Offering a broad variety of treats to graze on as an appetiser, including a dolcelatte, a goat cheese (something I can categorically say I’m obsessed with; cheese is my jam) prosciutto, salami and smoked provola, I enjoyed the mixture of salty and tangy flavours.

I couldn’t help but feel it was a little style over substance, realising I could probably rustle something similar up myself via a supermarket deli counter. A light but satisfying pre-dinner appetiser, the board was nice without being spectacular; the hummus didn’t appear to be homemade and the rocket blanket looked like it had seen better days.

I’m sad to say that’s where the positivity train terminated. Bellies warmed up for the main event, the restaurant itself was the setting for the rest of the meal. Just a personal preference, but I’d suggest requesting a table in the window or in one of the more secluded corners if you’d like to enjoy your meal peacefully.

Seemingly sat in a (busy) walk-way for staff and customers looking for the loo, the table location and high stools didn’t feel particularly relaxed compared to other spots. Being near the tills, I also overheard several members of staff complaining about customers with the same subtly I’d assume Brum’s bronze bull would have running through the Library.

Having been provided with a three course menu to choose from, Victoria – seemingly the only person working there that liked her job that day – took the table’s order. Opting for the Plum Tomato Tart With Basil (£5.25) to start and the Maple Glazed Salmon (£15.25) for my main, I was optimistic I’d made tasty and contrasting choices from the summer menu, which a member of staff had assured the table was proving very popular.

When my tart arrived, I have to say I was underwhelmed – not to mention baffled by its construction. Having been expecting a delicate tart a very thin disc of puff pastry – which simultaneously managed to be both soggy and overcooked – strewn with uncooked tomatoes and limp slithers of basil appeared. There was no seasoning and the pastry itself tasted over baked.

I felt a pang of jealousy when I saw my fellow diner’s pretty salmon and mascarpone dish, although realised I’d escaped lightly when confronted with the uninspiring deep fried cheese sticks that arrived to the table next.

As a big fan of fish, and in particular salmon which very rarely disappoints, I couldn’t wait to tuck into my main course. Being that this fish option comes in at the £15 mark, I was expecting a thick, juicy fillet of salmon with a delicate sauce and a light side; perhaps Jersey Royal potatoes which are summer encapsulated, in my eyes.

Disappointingly what arrived was a skinny fillet of salmon and (gallons of) a viscous cream sauce, which wasn’t at all warm. Unfortunately both elements also lacked seasoning, and with no sides to accompany the dish it looked quite sad next to the bowls of pasta being delivered around me – which contrastingly were enormous.

Full disclosure: I was later told that sides are usually offered when this dish is ordered, although they do cost extra.

Dessert choices included Tiramisu (homemade – I asked) and a cheese board, but after having had the exact same cheeses included during the appetiser, I opted for the Panna Cotta (£5.50); a pudding I often choose when dining out.

Presentation wise, the creamy dessert looked rather lovely when it appeared and I was pleased to see flecks of vanilla pod nestled into the top. With some sliced strawberries nuzzling the dessert I expected it to be a rich and flavoursome dessert with a gentle hum of vanilla but.. bland. The additional balsamic glaze added to the presentation but failed to work as part of the dish.

Again, not awful – just not great. Which unfortunately sort of sums up my entire experience of Gusto Birmingham 2017.

Having dined here before and having had several very pleasant experiences the fillet steak I had just before Christmas was one of the best I’ve had on this side of the city there was something missing last night.

The summer menu lacks imagination (a member of staff essentially admitted they were just lighter versions of, or ever so slightly adjusted versions of existing dishes) and there’s little to get excited about when eating from it.

Flavours were bland and repetitive, and if you’re someone who suffers with food intolerances you’re unlikely to find much to enjoy. Several diners struggled to pick suitable dishes.

From my foodie travels around Birmingham over the last month or so, in my opinion there are other restaurants across the city, in particular along Colemore Row, that are offering better summer eats at the same or similar price point. Fingers crossed the autumn/winter menu will be more rousing.

Are you a fan of Gusto? Let me know in the comments.

Disclosure: I was invited by Gusto Birmingham to review the spring/summer menu as part of a blogger event, therefore the food was complimentary. However views and opinions in this review are all mine.