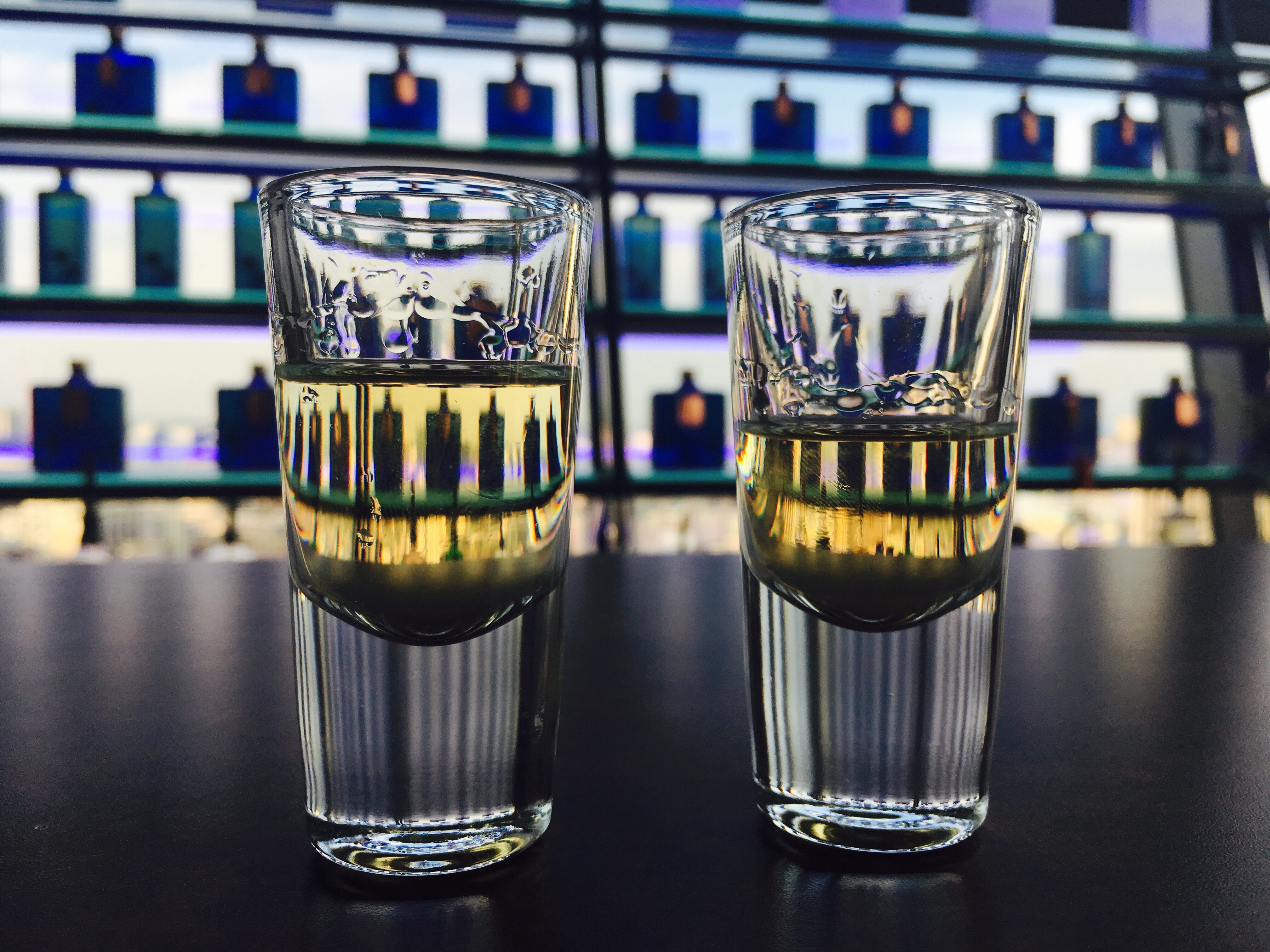 A few weeks ago I was delighted to see an invitation pop up in my inbox to check out the latest swish bar to open up in Brum hotspot The Cube, Haig Club Bar.

Elevated some 25 floors above the ground, this exclusive whisky bar promised bad-ass views of the city and some seriously strong drinks.. my kinda place.

Kindly being offered a coveted plus one to the party, I told Ian to put on a nice shirt and meet me at The Cube for a night of high-percentage booze and stunning views. Meeting up with some of my fellow foodies we jumped in the lift and headed straight for the top, keen to see what this skyline bar has to offer.

Sitting alongside the Marco Pierre White Steakhouse Bar & Grill and offering stunning views across Brum, Haig Club Bar has its own private entrance and seats just 36 guests; it’s the smallest ‘posh bar’ I think I’ve ever frequented. Stylish and modern, the decor has clearly taken inspiration from the blue and copper of the Haig Club branding, although it does feel a bit boys club meets VIP airport lounge in terms of its overall aesthetic. Being a fully paid-up ladette this didn’t bother me, but I can imagine it proving more popular with the chaps in the months to come.

Haig Club and Haig Club Clubman – endorsed by a fairly unknown bloke called David Beckham – feature heavily through a cleverly designed drinks list and a cocktail menu which features twists on classic tipples. The cocktail menu, created by head bartender Jack, is set to feature over 20 concoctions made with the brand’s signature whiskies, although guests are encouraged to enjoy tumblers of neat whisky first and foremost.

The evening started with a simple but delicious Haig Club Clubman and Cola. Served in a tall glass over ice with a slice of orange, this introductory drink was, and remained, one of my favourites of the event. After taking the obligatory photos of the view from the floor to ceiling windows – which is quite something it has to be said – we grabbed a table and tasted both whiskies from the Haig brand. I personally preferred the sweeter vanilla undertones of the Clubman, which luckily was also the base for most of the cocktails that night too.

We were then given some samples of the bar menu (all £6) to munch our way through, alongside paired cocktails. First up was a platter of chicken and duck satay skewers; the chicken was my preferred option, and had a decent peanuty flavour. These skewers were accompanied by one of Jack’s new signature cocktails, Pears in Paradise, which combined Clubman whisky, pear liqueur, cloudy apple, cinnamon and lime (as yet not on the menu) which was tasted bizarrely nothing like whisky at all; it was very refreshing.

Next up was a black pudding bon bon with homemade brown sauce, and patatas bravas. I’m not a huge fan of black pudding, and these balls did little to change my mind, but I liked the spicy homemade brown dipping sauce very much. The patatas bravas had a thick layer of melted cheese and tasted a lot like lasagne; not a bad thing (I love both cheese and lasagne) but equally not quite the Spanish-inspired dish I was expecting. This was paired with the Clubman Apple Mule which mixes ginger beer and apple for a firey cocktail; one of my favourites of the night for sure.

Other food plates we sampled during the evening included scotch eggs, chorizo and black pudding sausage rolls, aromatic king prawns, and Iberico ham croquettes. The scotch egg was an enjoyable dish, with the sunshine yolks still gooey, and I liked the hint of Dijon mustard in the croquettes. The sausage rolls had too much flakey pastry and the filling wasn’t to my taste, but I swapped the rest of my roll for more prawns and merrily munched on.

The food is designed to be a snack rather than a meal, and while some plates were perfectly nice (the chorizo in red wine glaze was simple but popular on our table) I don’t assume this will be the draw for most people visiting the bar. With cracking views of the Birmingham skyline and a some delicious drinks available (from what my booze haze let’s me remember at least) there’s no doubt in my mind this small but striking venue will prove popular.

Finally we were invited to take part in a cocktail making session with Jack, who showed us the detailed creation of one of his favourite cocktails using the Haig whiskies: the Berry Beauty (Clubman, Chambord, Grand Marinier, Sugar Syrup, Raspberries, Rosemary). From setting rosemary on fire with a mini blow torch to allowing us to try shaking our own cocktails (having had 5 already) I had to admire his bravery. His passion for the actual act of creating a drink was also wonderful and at just 23 he’s doing remarkable things.

Oh and here’s a fun fact: those with a wedge in their wallet can actually purchase a bottle of Haig Club – priced at a cool £200 – which can be left behind at the bar with a personalised embossed dog tag so it can be retrieved during the next visit. Oh how the other half live!

It’s advised you book a table in advance (open Tuesday to Saturday) and be prepared to splash the cash; single shots are around £8 and cocktails start at £12.50. This place is clearly aimed at whisky lovers, but if you’re not a fan per say don’t be put off; some of the cocktails (priced around £12-£15) are so well crafted you wouldn’t even know they’re made of the stuff. I’ve never been a big fan myself, but I found most of the tipples delicious – as my hangover the next day proved – especially the Berry Beauty that tasted just like red fruit pastilles. I know.. what a time to be alive.

Have you been to Haig Club Bar before? Do you rate the food? Let me know in the comments.

Disclosure: I was invited to attend the launch of Haig Club Bar by the gorgeous folk at Rewired PR. All opinions, photos and drunken behaviour are my own.. unfortunately