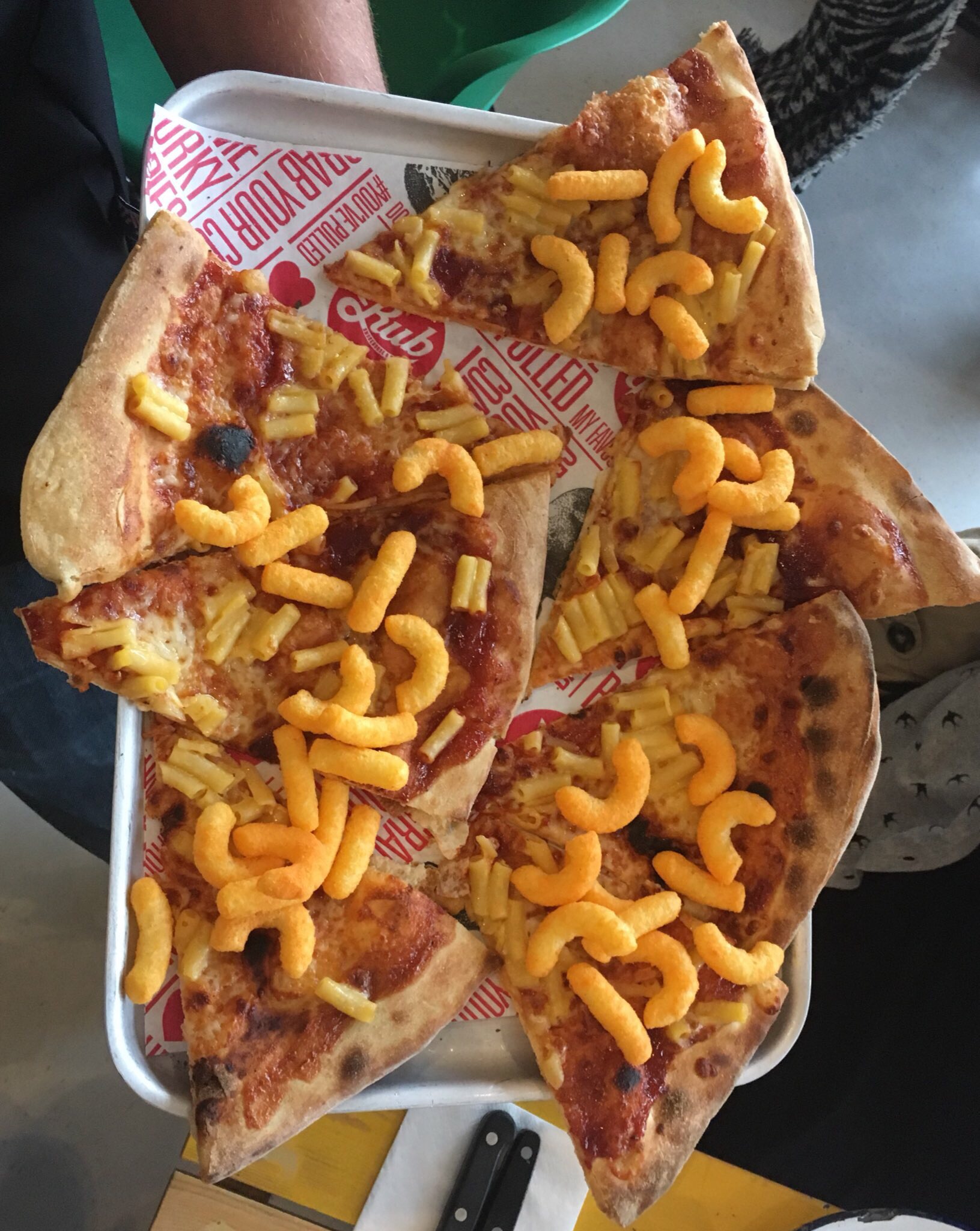 My wedding diet has gone completely to pot in the last few weeks, it has to be said. With a busy month of foodie events coming to a close I thought I was back on track last week, but then I ended up at Rub Smokehouse.

Rubs has become a popular Brum restaurant over the last year, offering filthy food and huge portions. Found at the far end of Broad Street, this is a place where diets don’t exist and getting messy is encouraged. Offering American-inspired treats such as double decker burgers, drippy cheese nachos, giant hotdogs, and even a chicken nugget the size of your head (go look on Instagram; it’s kind of gross and brilliant all at the same time) the venue often hosts themed events for junk food fans.

Previous events have included all you can eat ice cream, but this time I was here for unlimited ‘crazy toppings’ pizza. And I was pretty excited about it, to be honest.

For £12.95 guests could eat as many slices of the unusual creations as they like within 90 minutes. Better yet, the person who ate the most pizza (including two slices of the mystery ‘Ring Sting’ pizza) would apparently win £100 in RS vouchers. Various toppings were available including The Mad Korean (pulled pork with a Korean BBQ sauce, sesame seeds, kimchi and prawn cracker dust), Mac n Cheetos (macaroni cheese with Cheetos), Idaho State Fair Pizza (Frankfurter sausage, buffalo sauce popcorn and French mustard), and Katsu Chick Flick (Japanese curry sauce, mini chicken nuggets, pickled ginger and crushed spicy rice crackers).

There was also the illusive and charmingly named Ring Sting which had mystery ingredients and a came with a warning attached. Reassuring..

Having brought some of my fellow bloggers (and pizza fans) Caramel Latte Kiss and Miss Pond with me, we arrived early evening and got seated with some 241 cocktails before the feasting commenced. I have to be honest and say these cocktails were dreadful – all of them. Sugary, tasteless and badly made; we were really disappointed.

Served by the slice there was a lot of food to go around; I was quite pleased with myself for only having an omelette at lunch. The mac and cheese creation should’ve been a carb lovers dream with a layer of cheesy pasta smothered over the pizza base. There wasn’t enough sauce for my liking making the whole thing rather dry although I actually quite enjoyed the added Cheetos (because I’m a bit weird like that). They were quite sporadic though, with some slices having lots and other none.

I quite liked the unusual katsu curry pizza, which offered a different flavour entirely to the other cheese-fest pizzas, although the nuggets of chicken were, again, a bit sparse.

My hit of the event was the The Mad Korean. I loved the spice, the flavour and texture combinations, and the crushed crackers. Absolutely filthy good and totally over the top, I went back for a second (and fifth) slice of this one. I moronically wanted to try the super hot Ring Sting pizza we heard about too, but alas never got offered a slice; perhaps it wasn’t available on the night.

We all left 90 minutes later stuffed and drunk on carbs. I high fived a man as I left because he was holding a huge tub of mac and cheese; I didn’t remember this until 48 hours later due to my carb haze. I guess these events are a fun way to sample the menu and if you’re just a fan of eating until you can’t move (what a time to be alive) you’ll like Rub Smokehouse – I saw some skyscraper burgers go past me that looked pretty good although I’ve heard mixed reviews since my visit. I’m not sure I’ll go out of my way to go back again, but I can see why the yooooofs like it.

Disclosure: I was invited by Rub Smokehouse to review the event in return for an honest review. All opinions, photos and bloated belly are all my own

2 thoughts on “All you can eat pizza @ Rub Smokehouse ”