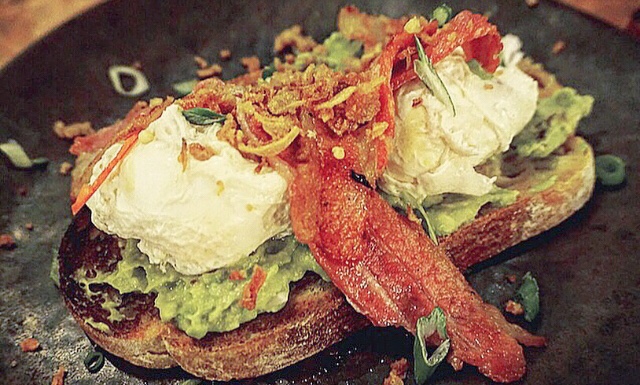 Sundays are the best. The Husband and I usually spend ours eating and abusing our Cineworld Unlimited cards; last Sunday was no exception. Before making the trek over to the cinema (located somewhere between Broad Street and Mars) we decided to ditch our usual go-to spots and grab brunch at The Alchemist on Colmore Row.

I don’t usually frequent this place much, largely because I hate crowds and because I’m too old to fight men in suits for a drink at 6pm on a Tuesday. However, come a Sunday morning this bar-come-restaurant has a much calmer vibe, and is full of tired mid-30 folk like me just seeking a decent plate of food and shelter from the cold.

We grabbed a booth just off the bar area and checked out the breakfast menu. The usual avocado-based fare is available, and there’s some healthy thing called overnight oats which I’m sure that Joe Wicks chap would approve of but does bugger all for me.

After a round of coffees (early minus points for the ridiculous handleless glasses) and juices had been delivered, we ordered a breakfast each plus another one to share – because I’m a greedy lard bucket and Ian’s easily led. The food arrived quickly (no doubt because the place was rather quiet) and initially looked decent albeit in portions that could be more generous for the prices.

My Smashed Avocado with Poached Eggs and Bacon (£9) came served on a thin slice of sourdough toast and sprinkled with a handful of sliced spring onions and red chillies. The latter isn’t mentioned in the menu description but works, and overall the flavours are well put together.

Unfortunately, the poached eggs were over cooked for my taste (and probably most people’s) and I missed the golden yolk popping over my toast – which ironically wasn’t really cooked enough.

Our sharer of Mish Mosh (£7) smelled inviting as it hit the table, combining chorizo, spinach, mushroom, cheese and broken eggs to form a messy but tasty brunch dish. A single slice of toast is included to scoop up the contents, which collectively tastes pretty good despite looking a bit like a breakfast that’s been dropped on the floor and put back in a skillet.

It’s a very small portion of food – thanks to a deceptively wide yet shallow pan – and I doubt many would find it satisfying as a solo dish. We both struggled to muster much excitement for this.

Finally, Ian’s Steak and Eggs (£12.75) arrived served with hash browns – it didn’t however have any eggs. Yes, really. The waitress seemed as confused as us but quickly returned with the full dish and an apology. Served well done, instead of pink as requested, the steak wasn’t perfect by any stretch of the imagination (especially given the price tag) but at least the two rogue fried eggs oozed nicely at the touch of a knife.

Even Ian (who rarely moans about anything, let alone meat) admitted the meal had fallen a bit flat with almost everything lacking in seasoning. He went as far as to call the steak tasteless.

A hit and (largely) miss breakfast with room for improvement; the dishes were edible but far from exceptional although the coffee and table service – despite the ridiculous egg faff – were good.

I don’t feel the food justified the price tag on this occasion, especially with so many better places yards away. Pop round the corner to Urban for all things avocado based, or try Damescena for a different style brunch; both offer big portions and value for money.

I won’t be back for breakfast again, and it’s not made me want to try the main menu. A pretty underwhelming experience.

The Alchemist, The Grand, Colmore Row, Birmingham, B3 2DA

Disclosure: I paid in full via a credit card that’s seen better days. All words and photos are mine

2 thoughts on “A very mixed bag of brunch @ The Alchemist”