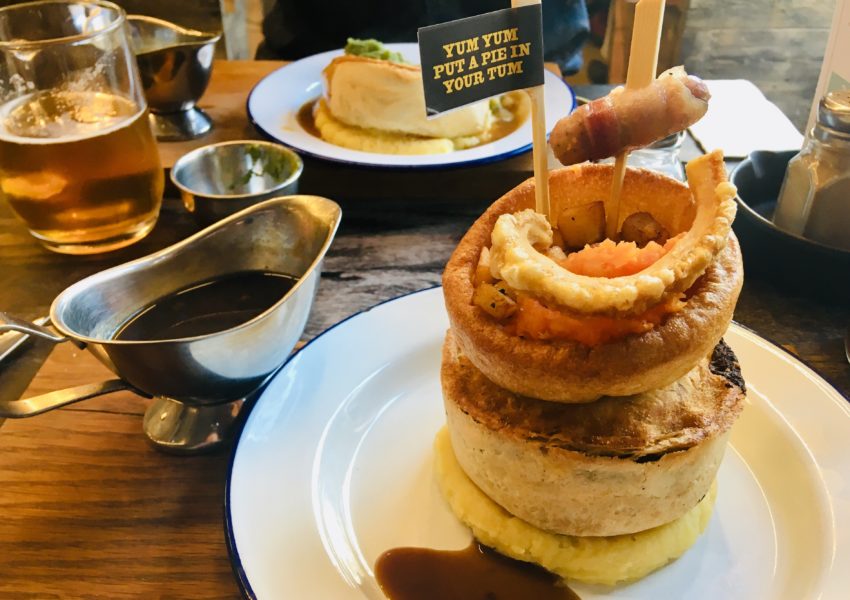 I’m forever on a quest to find the best Sunday lunches in Birmingham, but over Wine Weekend I scrapped a roast in favour of pies at Pieminister.

I’ve talked about Pieminister before, having first eaten lunch at the Waterloo Street restaurant when I was suffering with a solid 8/10 hangover. It helped alleviated the booze doom for a while and kept me full until dinner. It’s nothing fancy or groundbreaking, but it’s an easy place for a casual lunch that won’t break the bank. 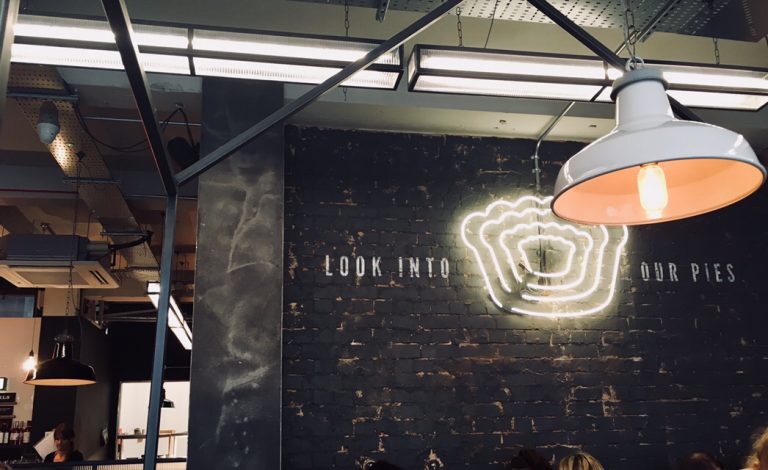 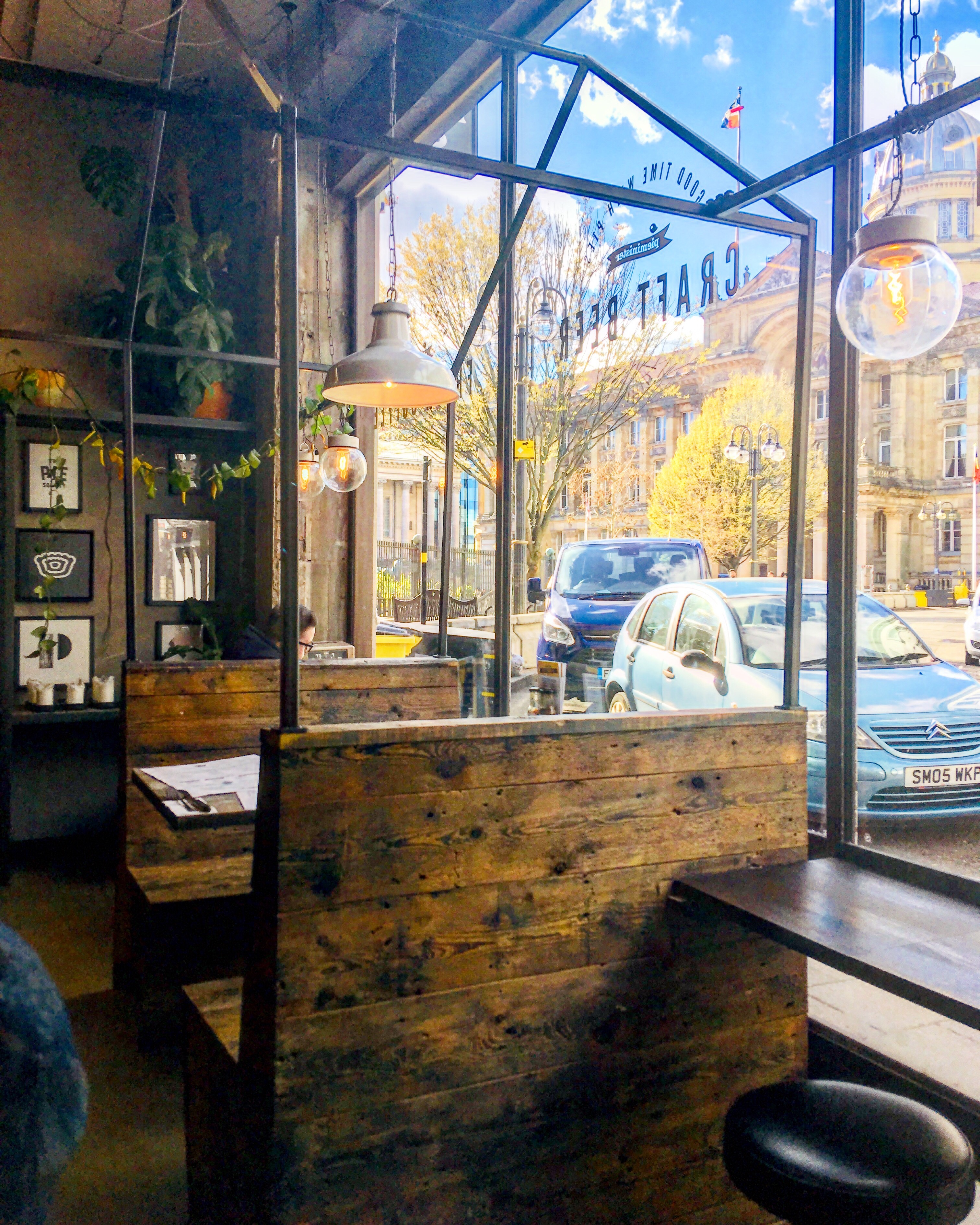 Pieminister hasn’t changed much since it opened back in 2017; it’s vaguely industrial looking but comfortable enough, and if you get a seat in the window there’s some nice views of Victoria Square. Unless there’s a van in front of the window, in which case it’s a view with a van. This visit landed on a Sunday (after 5 glasses of wine at Wine Weekend) when on top of the usual menu you can pick the Sunday Best option. 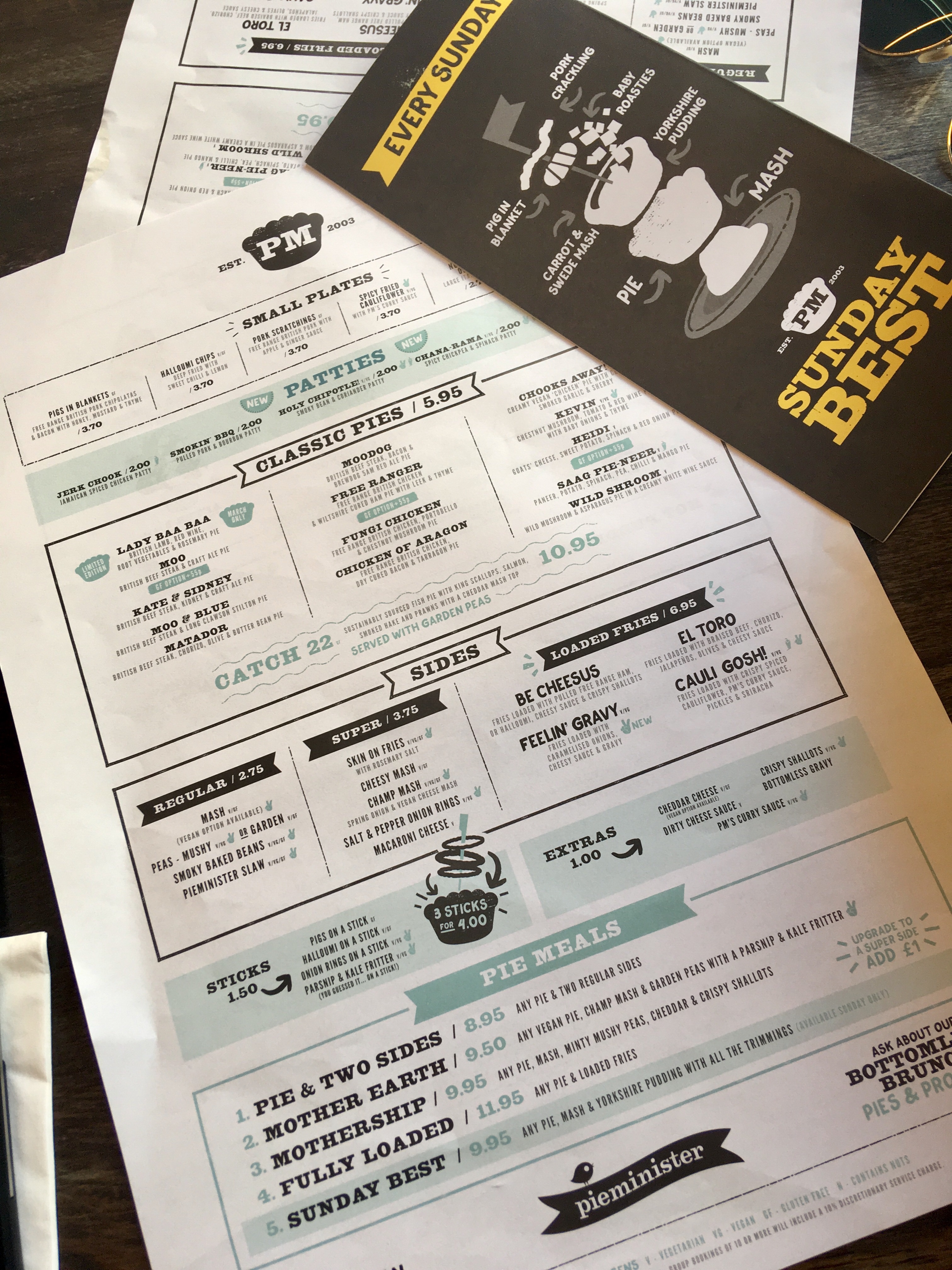 For £9.95 you get your choice of classic pie and mash plus a Yorkshire pudding, carrot and swede mash, baby roast potatoes, a piece of pig in a bacon duvet, crackling and gravy. It’s a gimmick and it’s an absolute mind-fuck to eat safely, but at under a tenner who’s going to argue about it? Not me, with my hungover blind optimism and need for complex carbs, I can tell you. 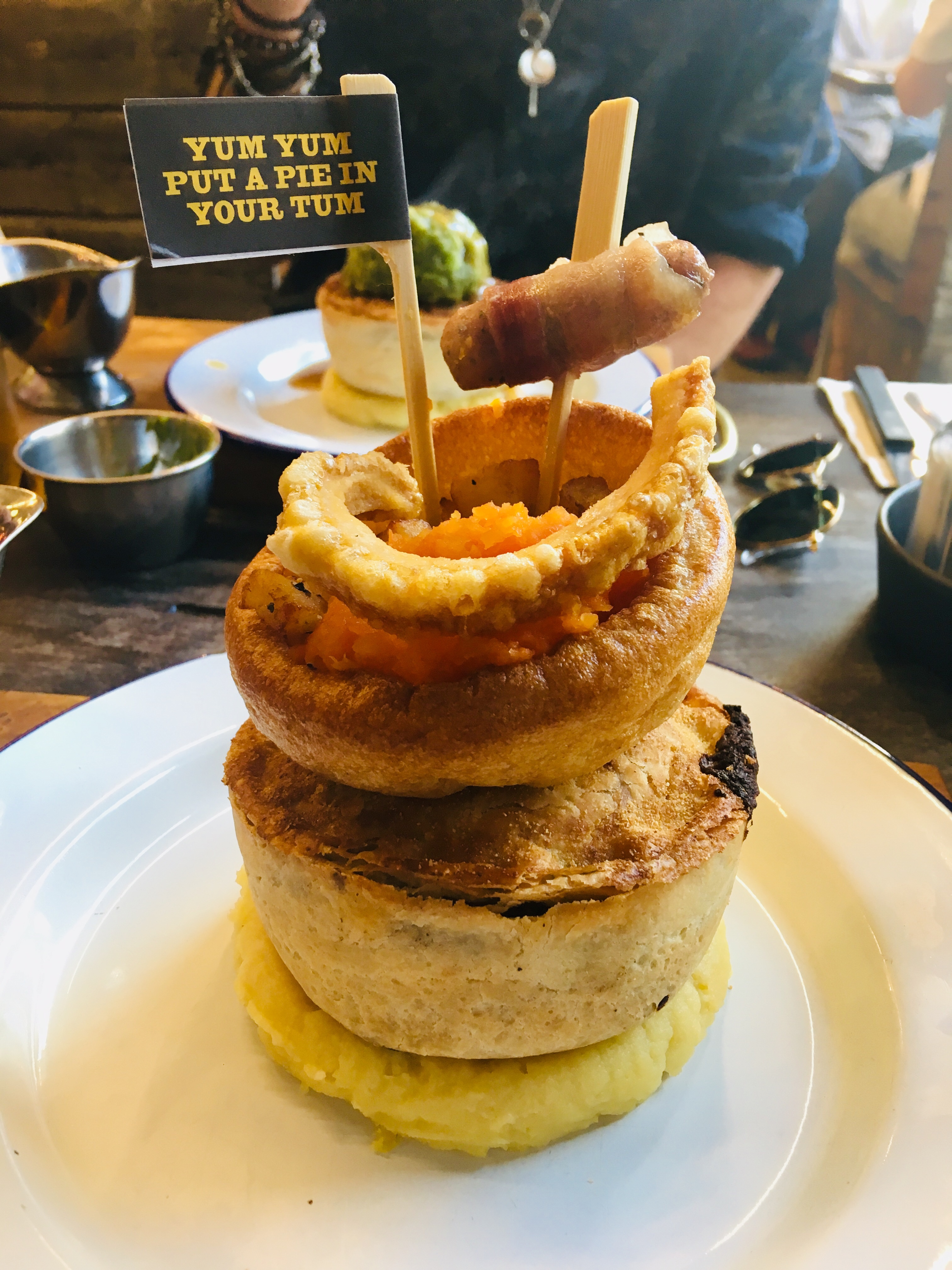 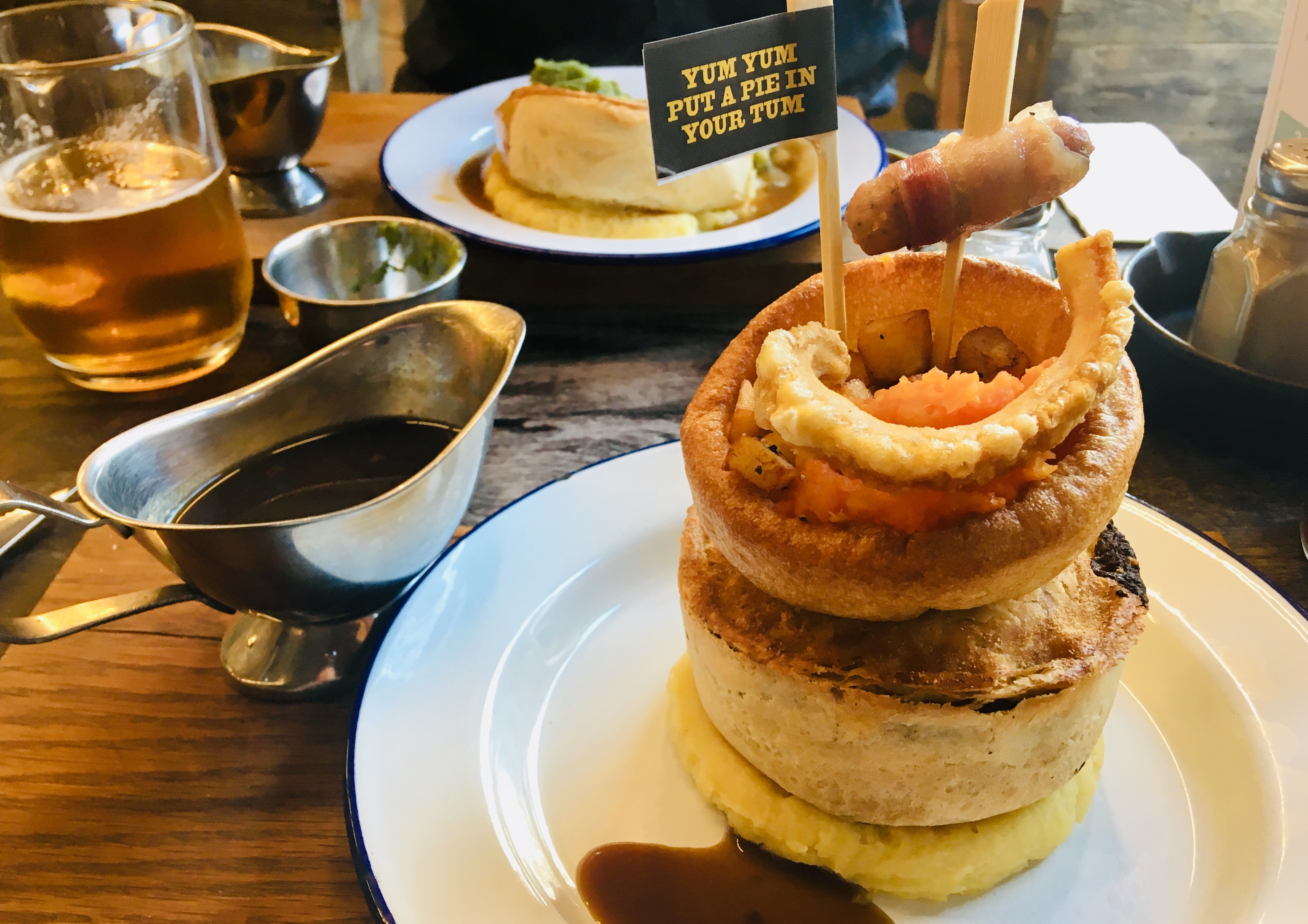 On arrival I considered asking for a bib. In the interests of health and safety I deconstructed the beige carb mountain, delving straight into the Moo and Blue pie. A crisp shortcrust pie with plenty of soft beef, the blue cheese flavour isn’t strong and acts more like a seasoning, but it’s decent. Other pies available included lamb and rosemary, chicken and mushroom and something vegan that I had no interest in but I’m sure others would. 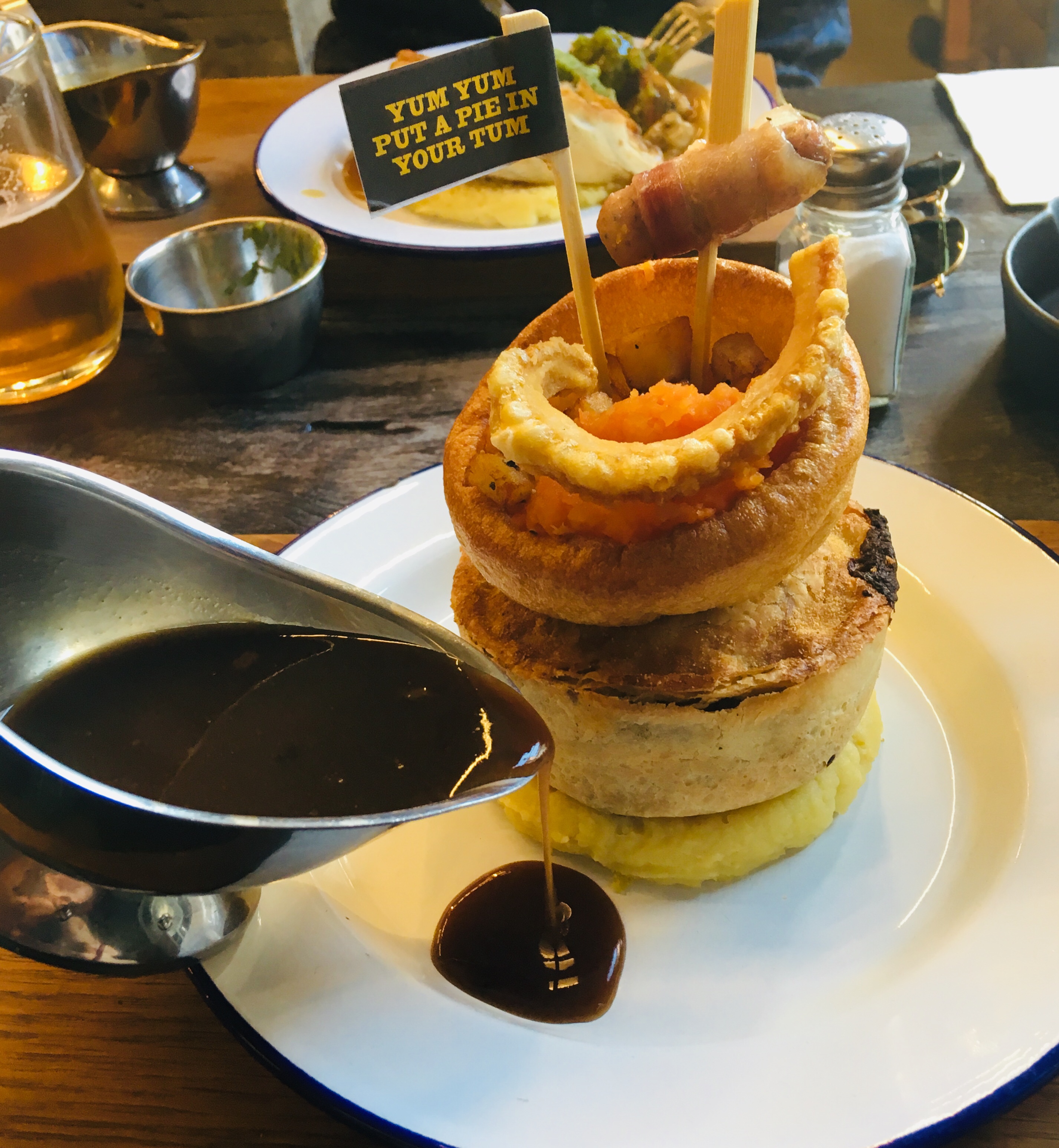 Hitting the spud sections, the mash is nice enough without setting the world alight (lets be honest, it’s mash – not an undiscovered Beatles album) and the chunks of roast potato are alright. I’d rather have had one normal sized roastie than a handful of potato pebbles but, smothered in the not-at-all-bad beef gravy, they worked just fine. 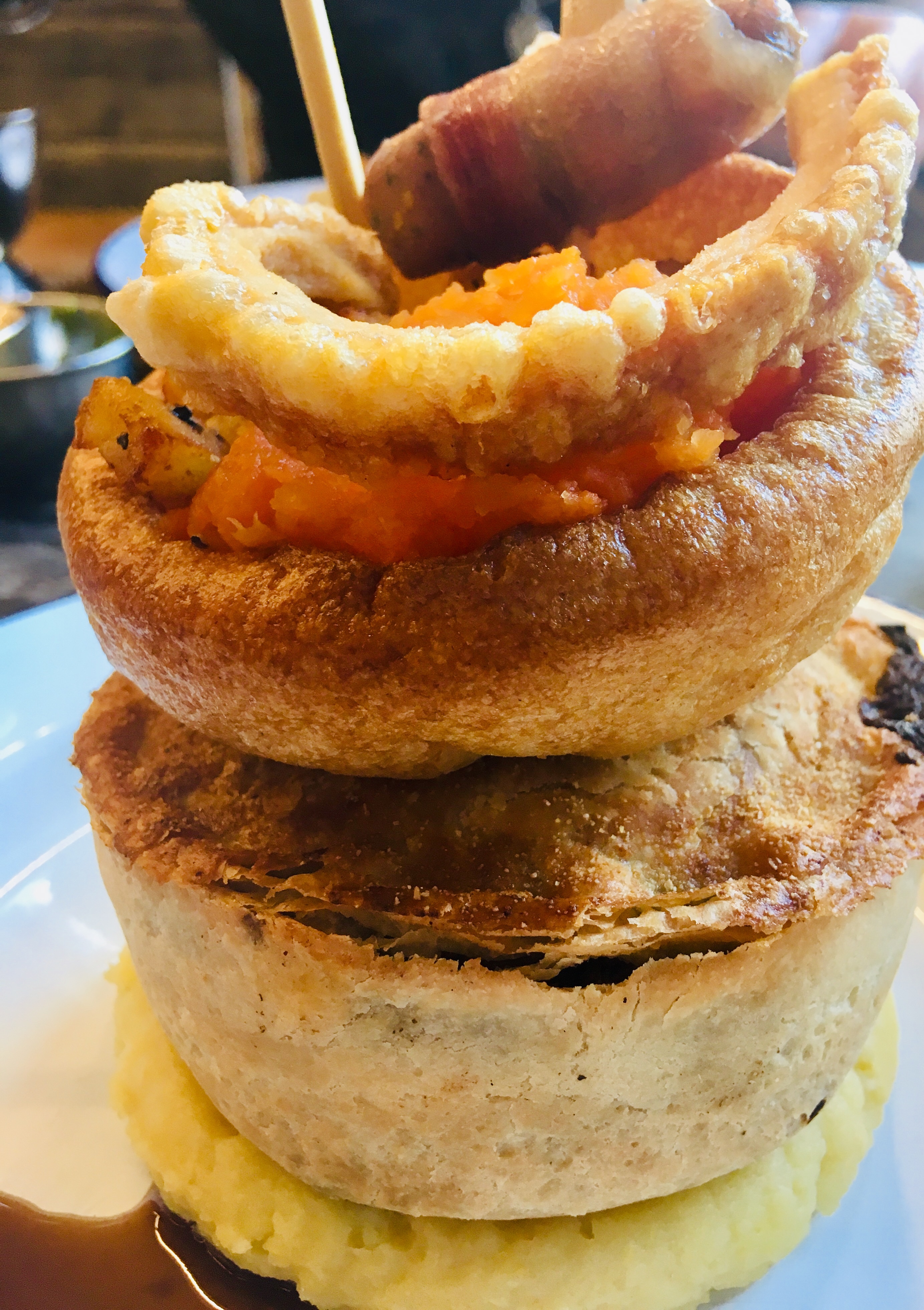 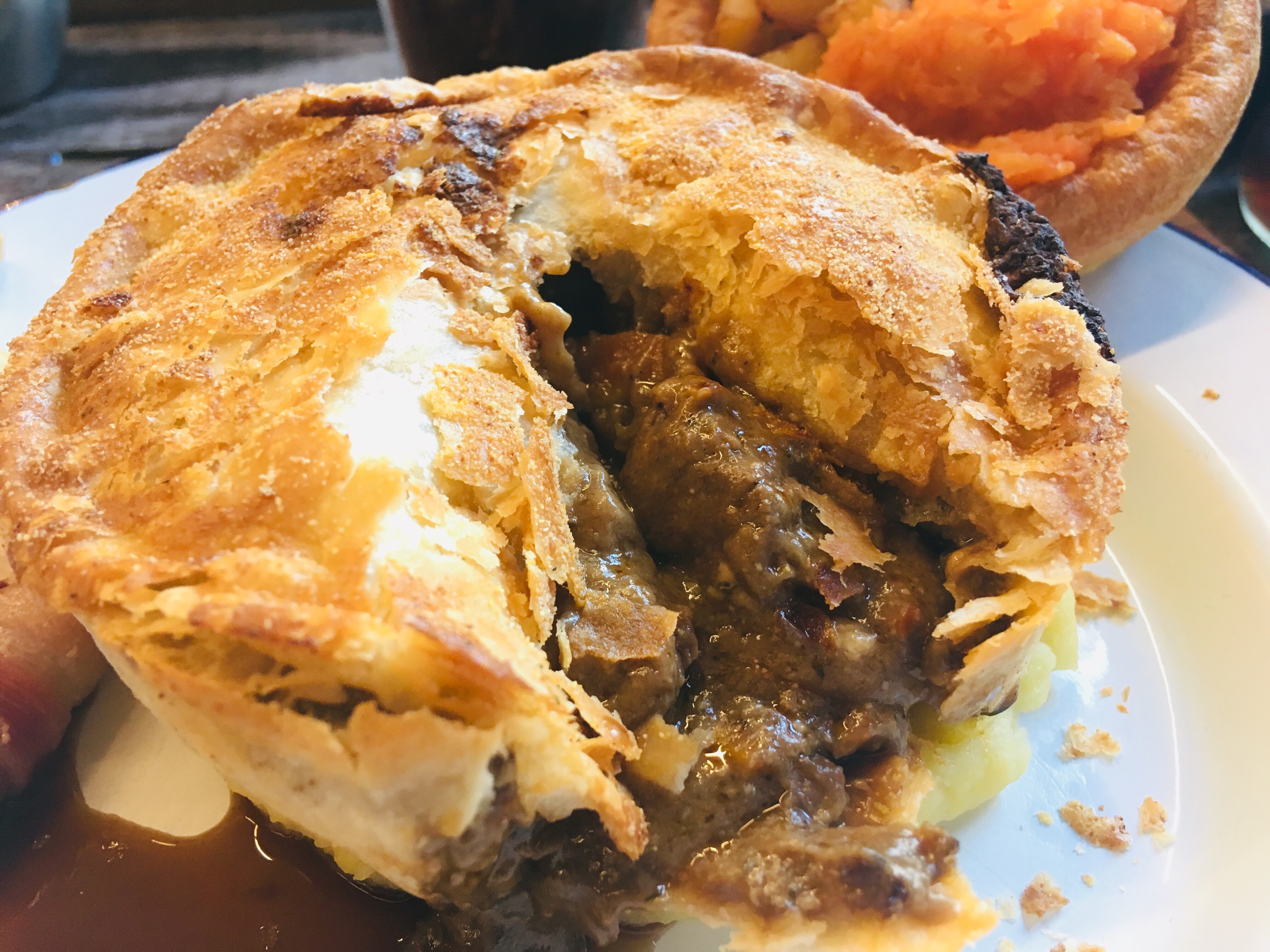 The veg mash didn’t excite me much and only adds to the overwhelmingly beige aesthetic. The Yorkshire pudding was crisp and made an excellent vessel for a liberal gravy sloshing. A lonesome but tasty pig in blanket and curl of crackling went down well with my husband – a man who will eat anything as long as it once lived and has gravy dripping off it. 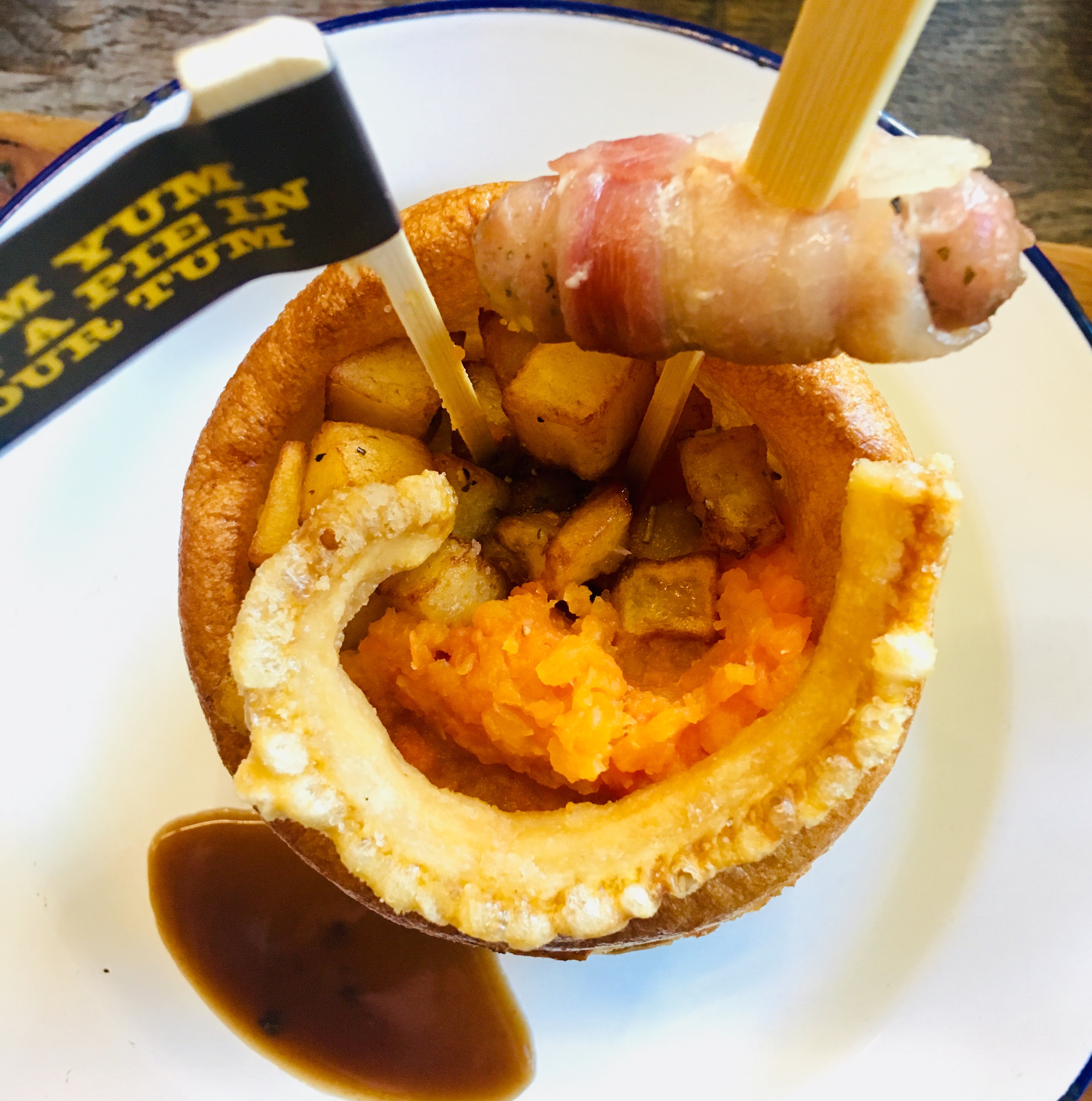 There’s plenty to like about this feast – most notably the cost. The pies are a good size and well made, and the additional bits are (mainly) quite good. It desperately needs some colour, even if just from some boring garden peas, but it did the job and I left needing a mobility scooter. There’s vegan and veggie options available, if that’s your bag.

It won’t be for everyone but there’s much worse available yards away for twice the price. You can read about a weekday Pieminister visit here.

Disclosure: We paid in full and all words and photos are mine.