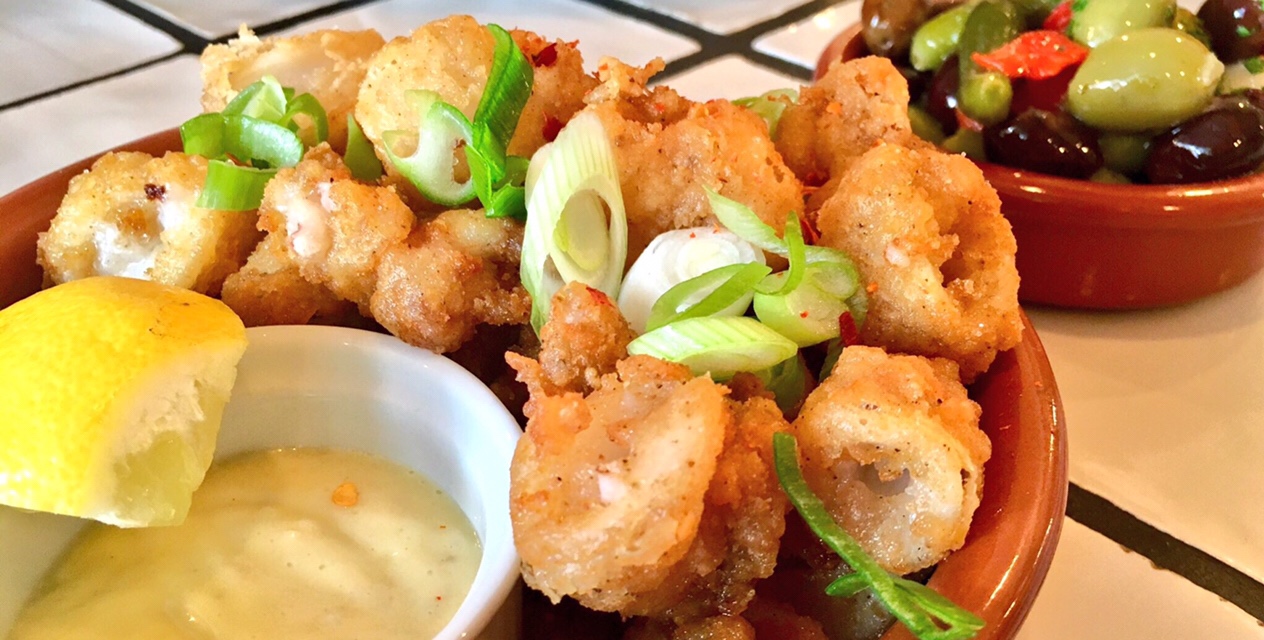 While Scott’s of Harborne has been making a name for itself as a brunch hotspot, it’s the tapas and small plates that have been on my radar.

Last month, on a soul-lifting sunny afternoon, I visited Scott’s of Harborne with some friends in search of a casual bite to eat. A beautiful little cafe on Harborne high street, it’s an ideal venue for an intimate girlie get together over a coffee or a large glass of wine. Whatever floats your boat.. personally, my boat floats on a sea of gin. The prettiest Brum cafe I’ve probably been in, rustic wood and green foliage adorn the walls and ceiling, and despite its size it feels light and fresh. 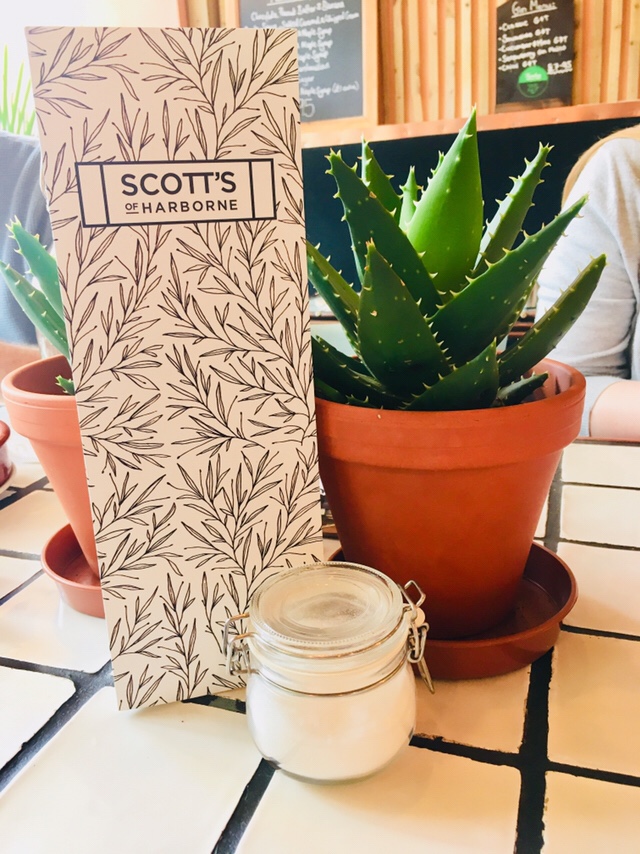 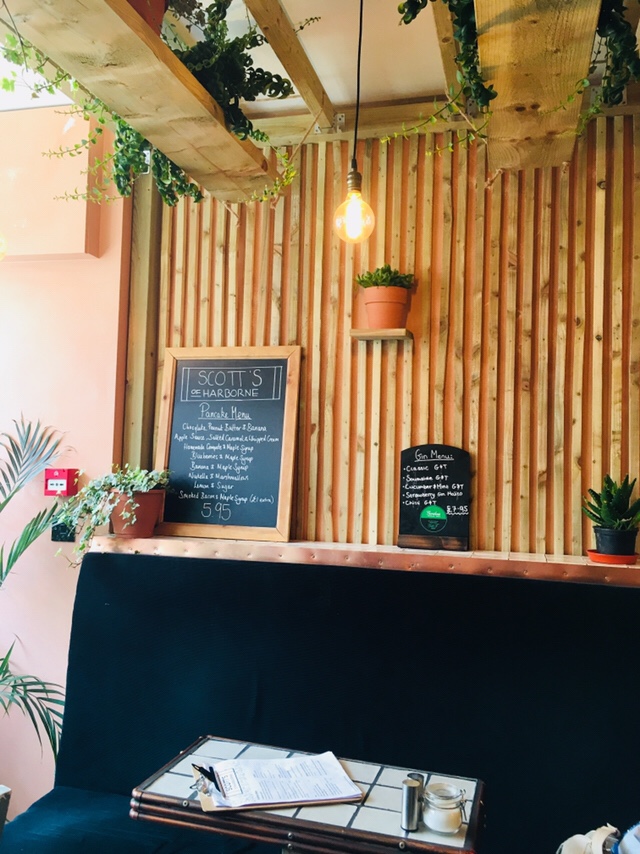 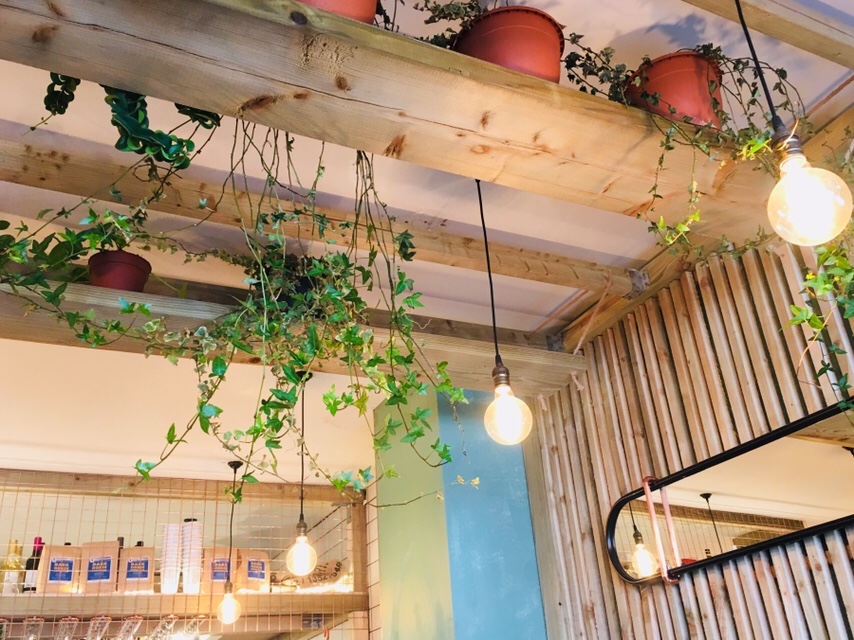 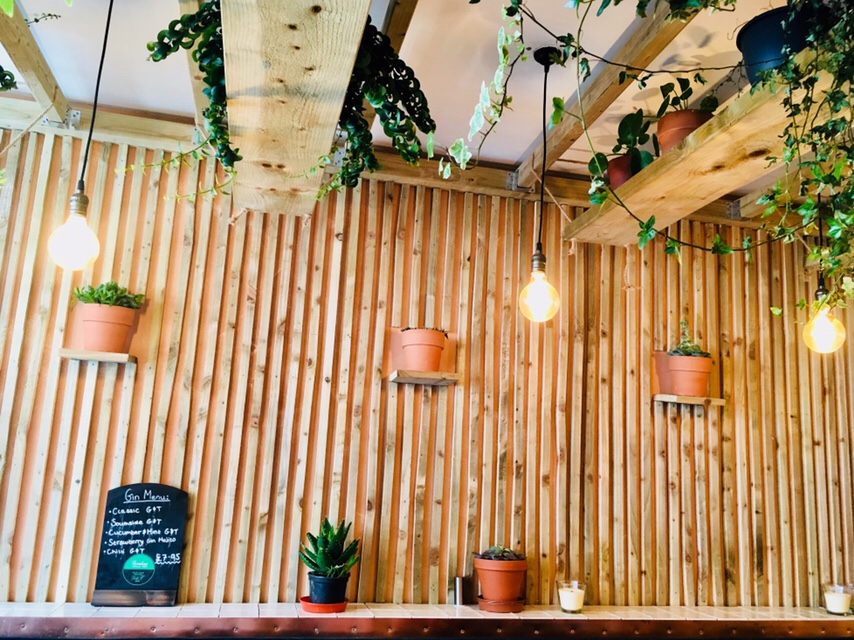 There’s a lovely breakfast menu but we had lunch on the brain. You can pick single or multiple plates to share, including meat, fish and veggie options. The menu manages to be varied and despite referred to as ‘small plates’ by the servers here, they are actually anything but. Personally that made me rather happy; partly because I’m a greedy git, and partly because I’d worked up an appetite (being utterly useless) at an Escape Hunt experience in town. 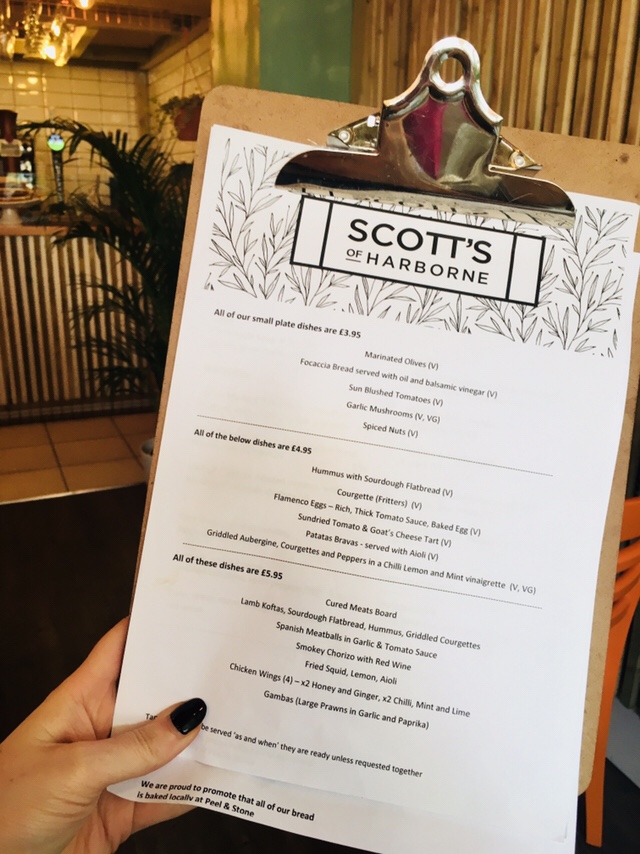 The four of us ordered a selection of dishes to share including Patatas Bravas, Marinaded Olives and Gambas. My favourite dish of the whole meal turned out to be the former, with what I can honestly say is (so far) the best tomato sauce I’ve eaten in Birmingham. Perfectly spiked with garlic and spice, it’s rich and vibrant with multiple levels of flavour. The prawns also came in a tomato based sauce, but one boasting a more smoky taste that begged to be mopped up with the additional chunks of bread. 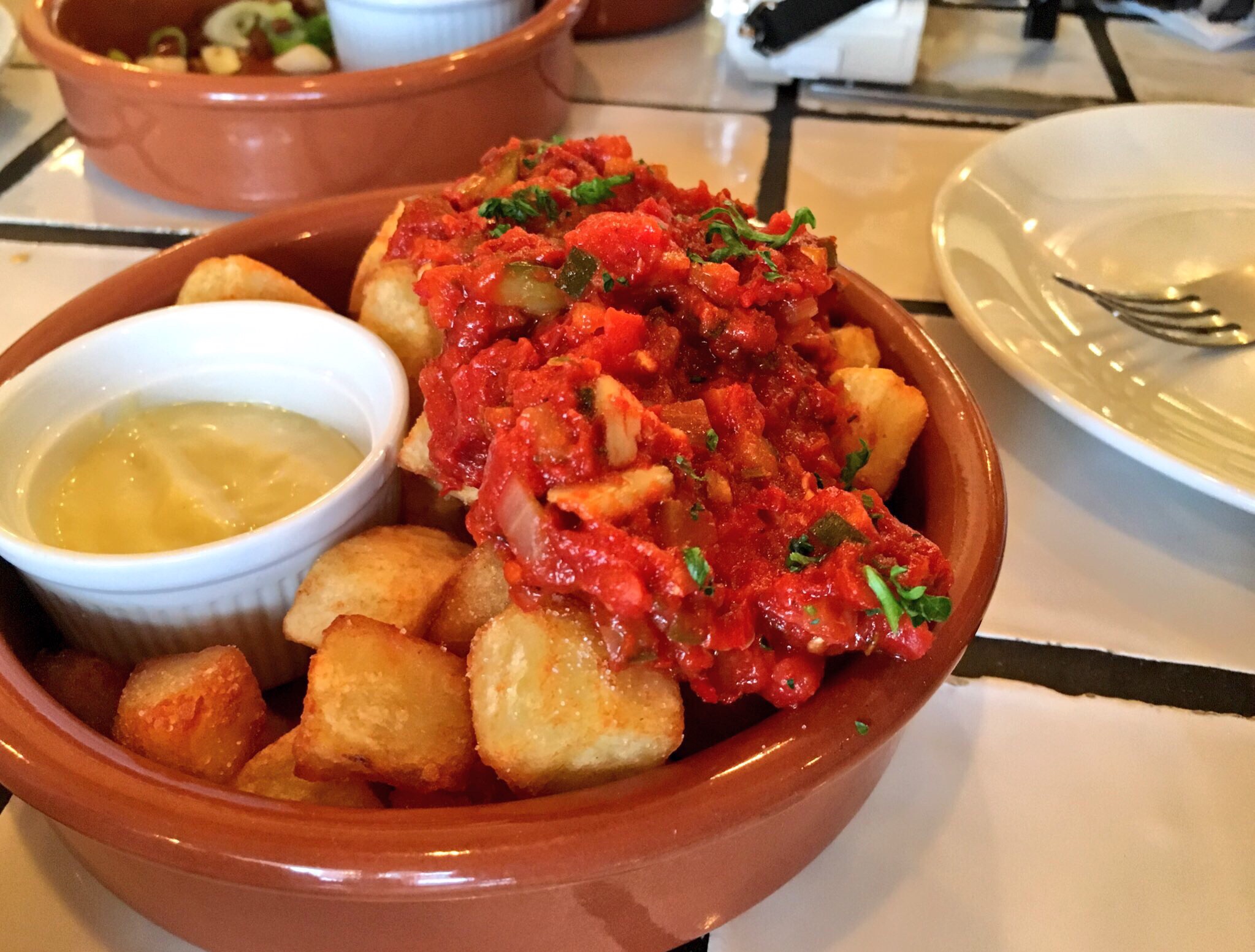 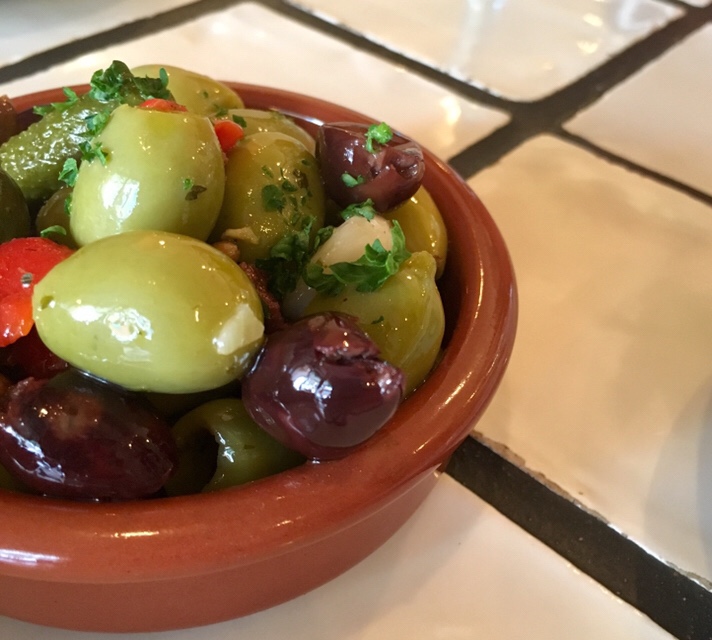 Next up, Fried Squid with garlic alioli and a Sundried Tomato and Goats Cheese Tart arrived. That squid is really rather wonderful, it must be said. The batter was light, the squid itself was fresh and cooked perfectly with no rubberiness. We were fighting over the last pieces of this stuff, don’t leave it off your order. The tart had a flaky buttery base, and housed plentiful amounts of the tangy cheese and blushing red tomatoes. This also comes with a small salad if you want to have it as a light lunch instead of as part of a sharing board. 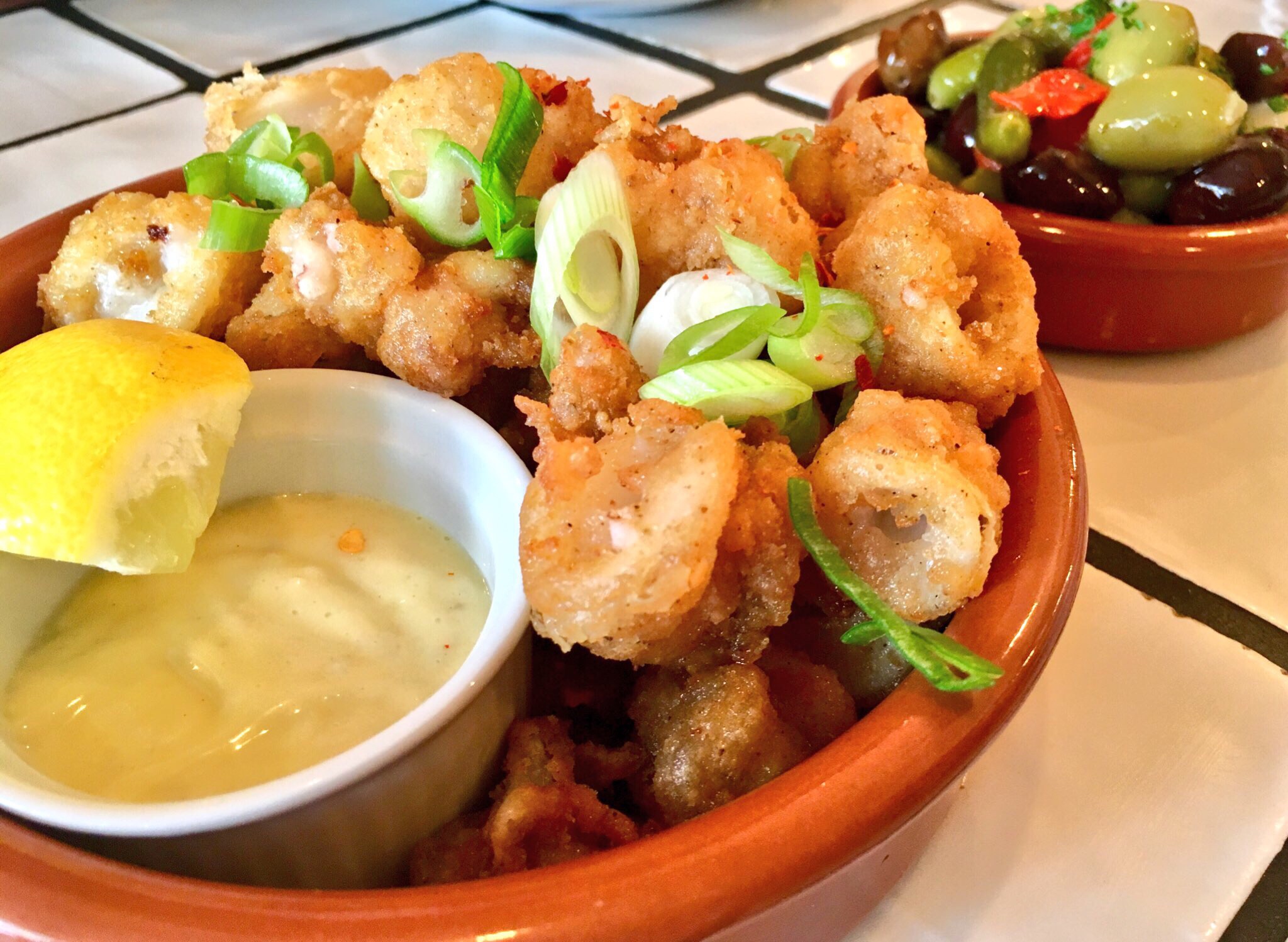 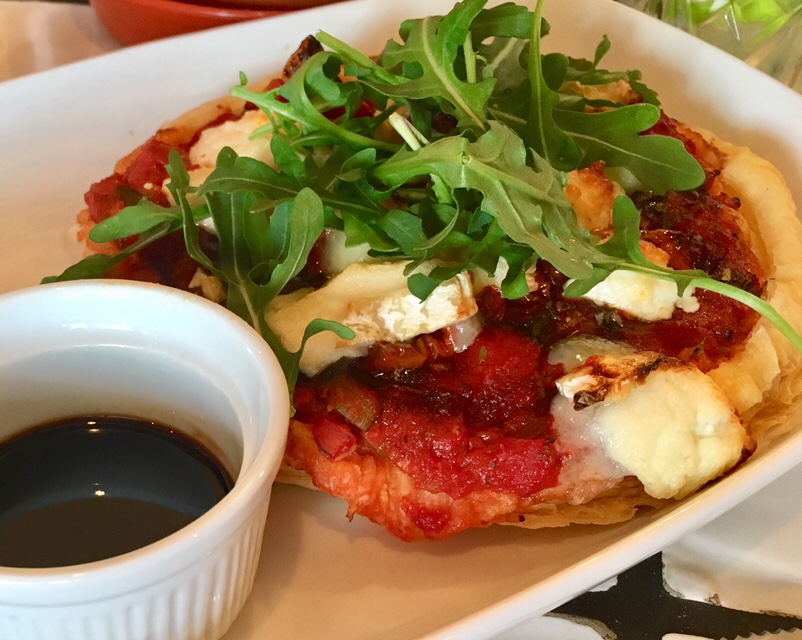 Lamb Koftas, served with hummus and chargrilled slices of flatbread, provided lots of Middle Eastern style-flavours, the hummus especially being exceptional. That maybe thanks in part to the liberal slosh of olive oil sealing the chickpea mixture to the dish, either way it managed to overshadow the kebabs. Impressive. This is some very well made hummus; next time I’d order this as a dish on its own. Griddled Vegetables were pleasant enough, but paled next to the Courgette Fritters which proved to be a totally unexpected hit. These little disks manage to make a pretty lacklustre vegetable all kinds of sexy. We only ordered them because the owner (unsurprisingly named Scott) told us they were one of his best sellers. I can see why now. 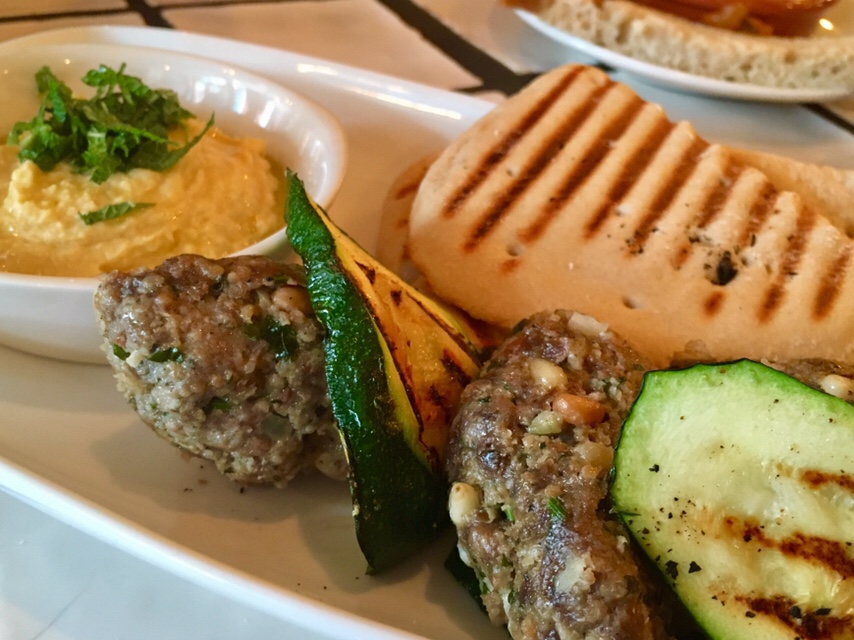 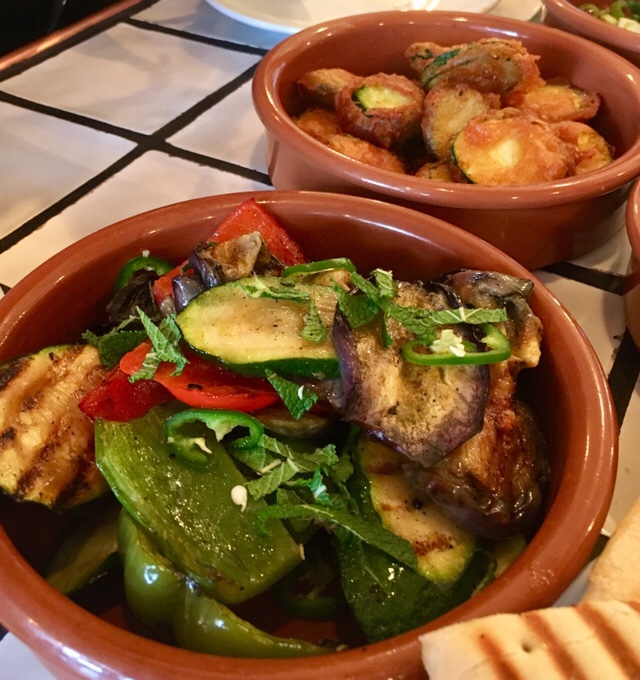 Our CuredMeat Platter and Chicken Wings hit the table last, the latter receiving a fairly lukewarm reception. While the platter had some good quality cured meats (and was very reasonable size for the price), the chicken wings were a bit of a let down. The wings themselves were a bit dry and had less meat to pull from the bone than you’d expect and lacked in flavour from the two marinades. I didn’t get much of the honey or the ginger, and the chilli, mint and lime wasn’t something I could detect from the crispy skin or meat. They’re not bad per say, they just don’t give me the same happy vibes everything else did and I wouldn’t order them again in their current form. 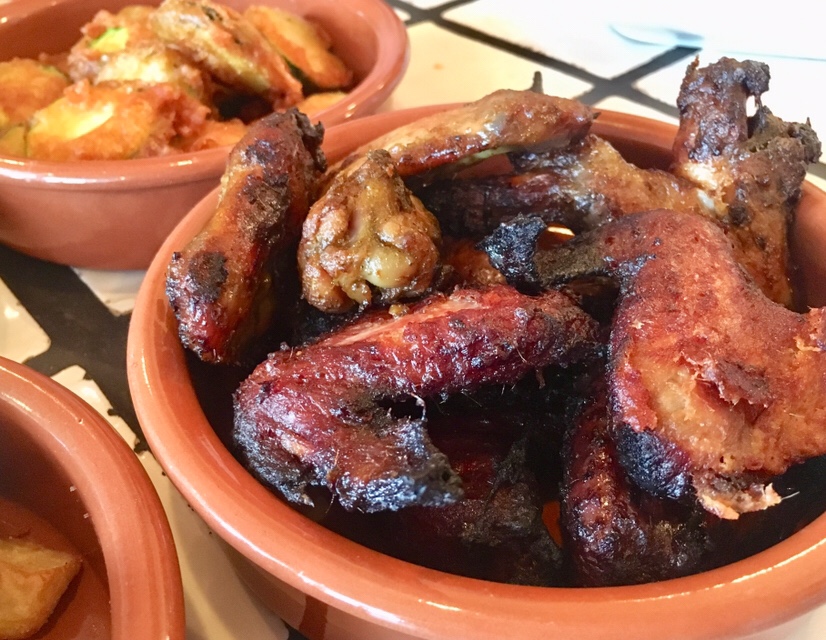 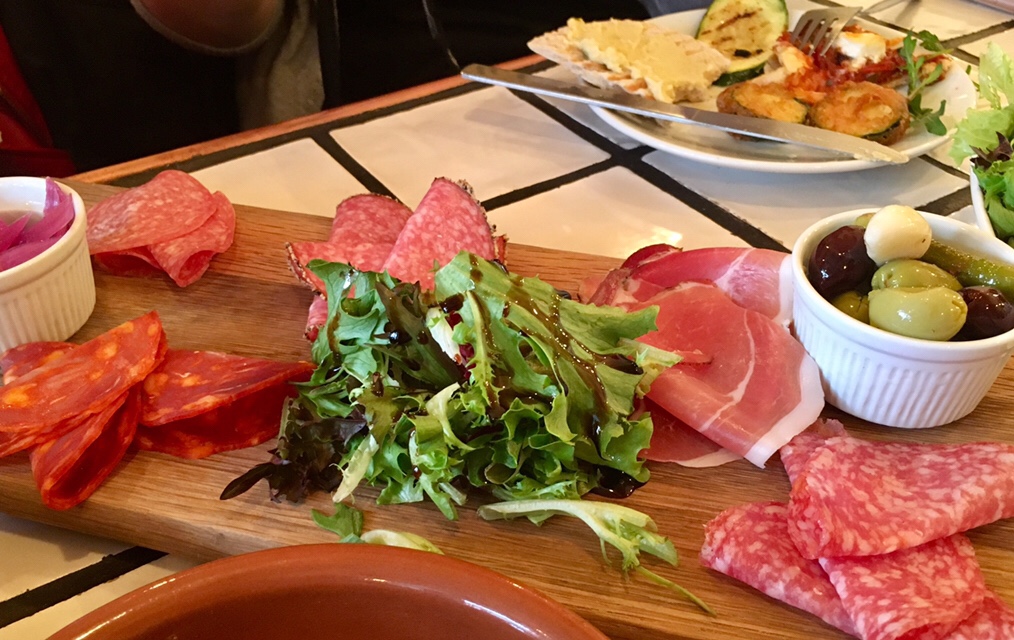 This is a gorgeous independent serving quality food. Prices range from £3.95 to £5.95 per dish. You can’t knock the prices and the service is efficient and friendly. To avoid the crowds give this place a visit on a Saturday after 3pm. There’s also a lovely gin cocktail menu and a selection of homemade cakes available at the counter – if you can get your hands on a slice of that carrot bad boy you’ll be one happy camper. 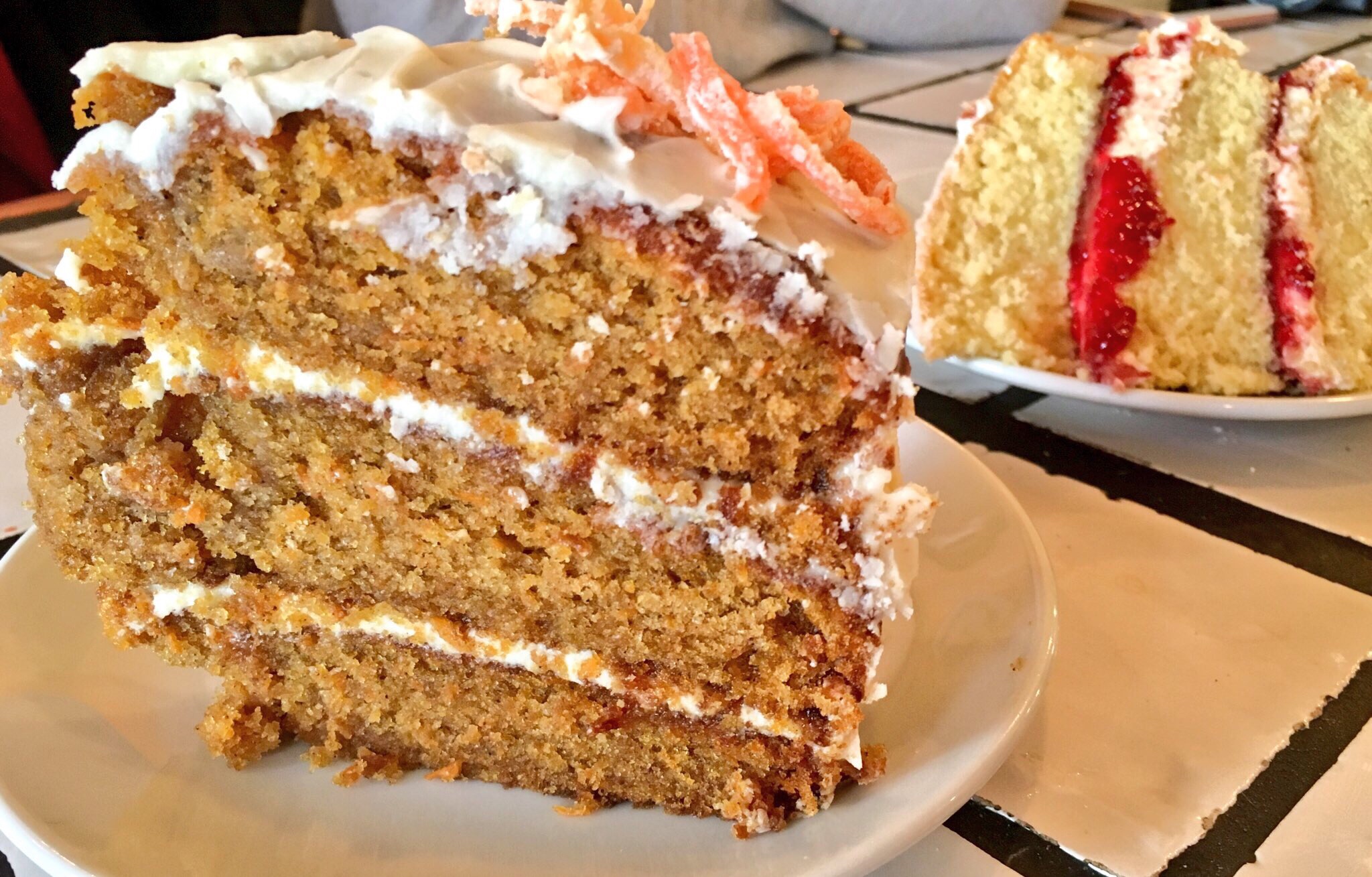 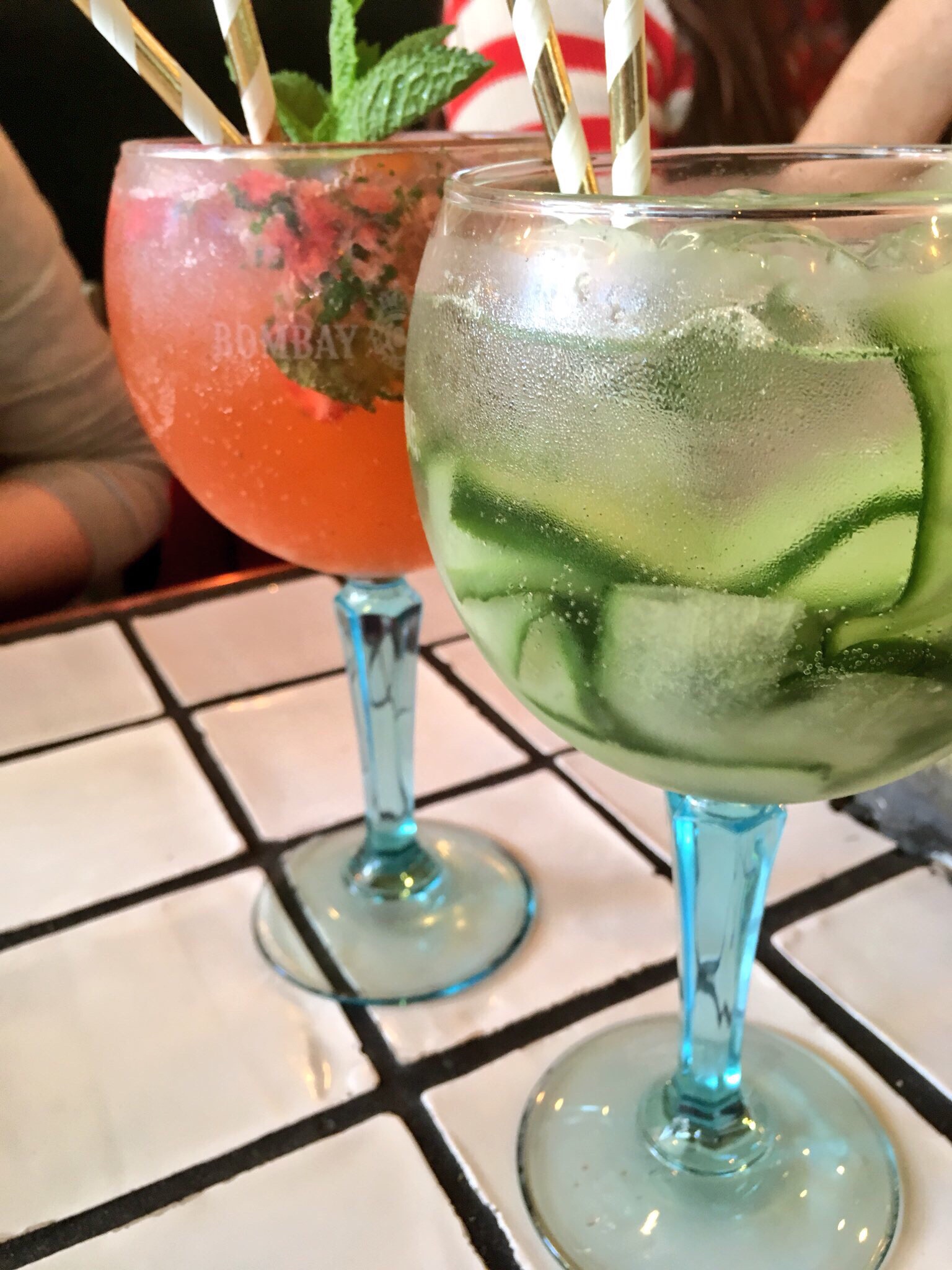 Are you a fan of this cafe? Do you have any other Harborne-based suggestions for me? Drop me a comment.

Disclosure: The meal was kindly arranged by someone else and I didn’t see a bill. Life is nice like that sometimes. All photos, words, and unusual over excitement for wall plants are mine.