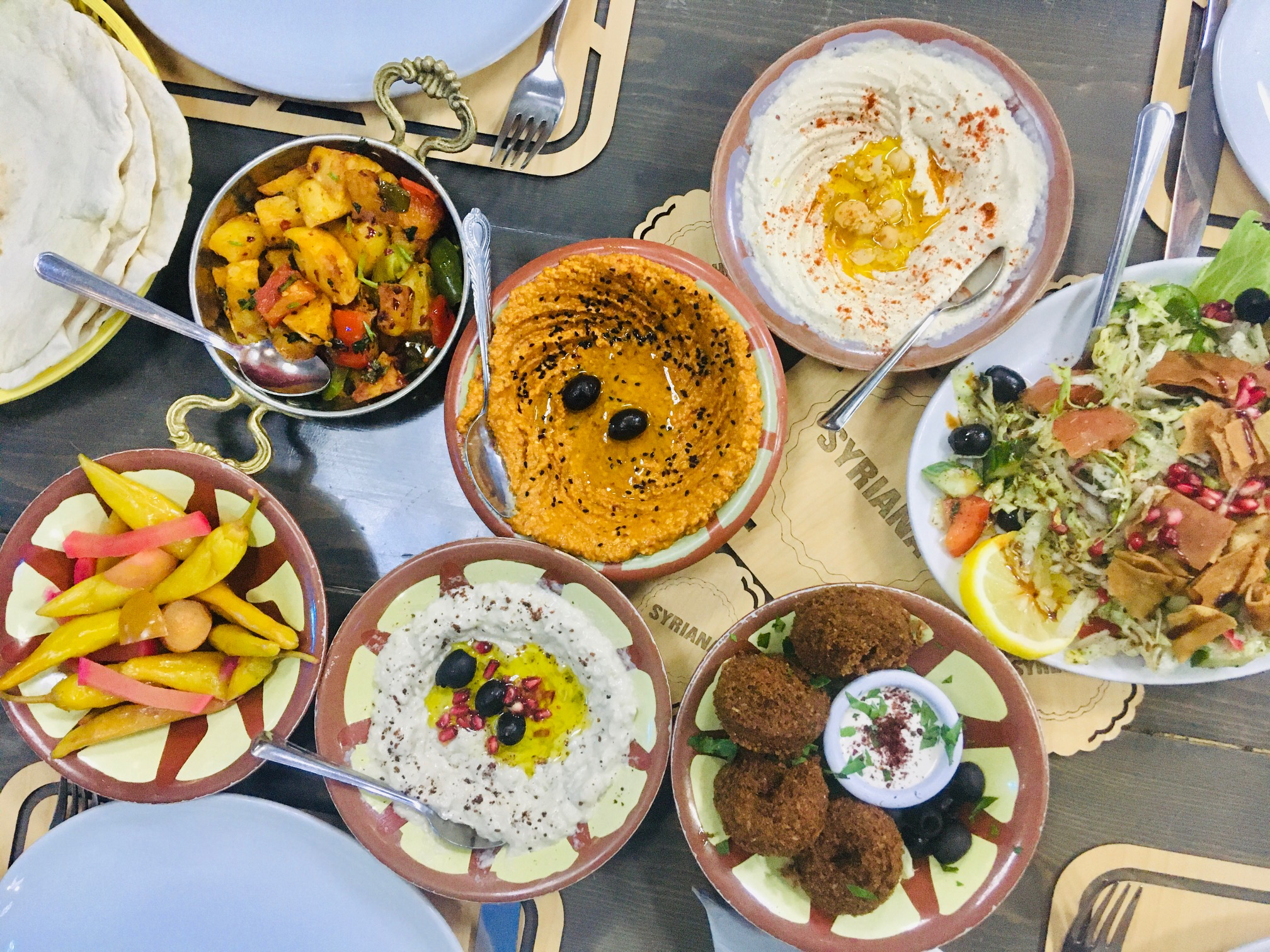 October has been a tricky month for the independent restaurant scene.

We’ve gained some new venues that are already making noise; we’ve sadly dropped some faster than Coleen ditched Rebekah. It’s been both a great month for some and a crushing pile of shit for others. The truth is, few are really safe at the moment, with an uncertain economic climate and more choice than ever before leaving people’s loyalties and wallets split.

All the goings on of the past few weeks – that saw a restaurant I have great sentimentality for close down, despite being well-loved by regulars – left me considering how many of the other longer standing independents must feel about a new wave of snazzy openings, with more to come before Christmas. Are we still actually supporting our old favourites as well as jumping on the new arrivals? I try to, and I’m as guilty as anyone of wanting to try the latest restaurant opening, but I think some karma was restored recently when a small group of us descended on Syriana up in Jewellery Quarter.

Sat on Constitution Hill for over a decade, this Middle Eastern restaurant underwent a refurbishment just under a year ago, the once tired space now being a sea of turquoise high-back chairs and long tables ideal for Lebanese banquets and too much wine. To be frank, it looks a lot better than the venue I remember visiting after one too many in the Lord Clifden a few years ago. Visiting mid week for dinner, it was noticeably quiet and the front of house team looked genuinely a bit bemused to see people – it may have been the amount of BYOB we turned up with or my hideous triple leopard print ensemble to be honest, but either way they’d be too polite to say.

While you can pick and choose individual dishes, there’s a very well priced set menu that we opted for (partly out of laziness and partly to try a bit of everything) for a very reasonable £19.95. That gets you a mostly cold mezze platter to share, a choice of main, and baklava with mint tea to end on. The (incredibly lovely) chap who looked after us throughout told us emphatically that the mixed grill main was the way to go, saying “you won’t leave here hungry..” which I later realised was an early contender for understatement of 2019 after “Boris is a bit of a Bastard.” 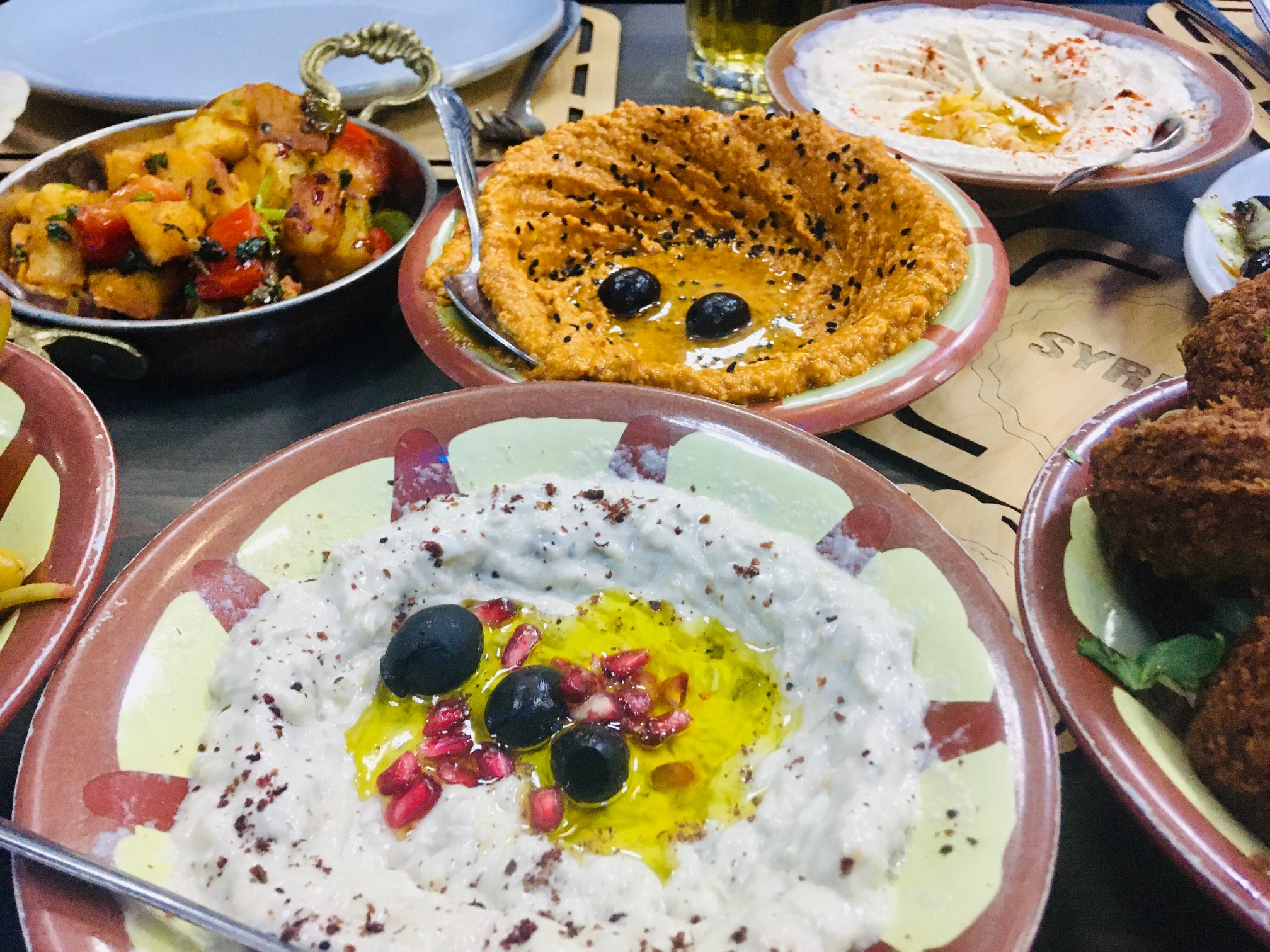 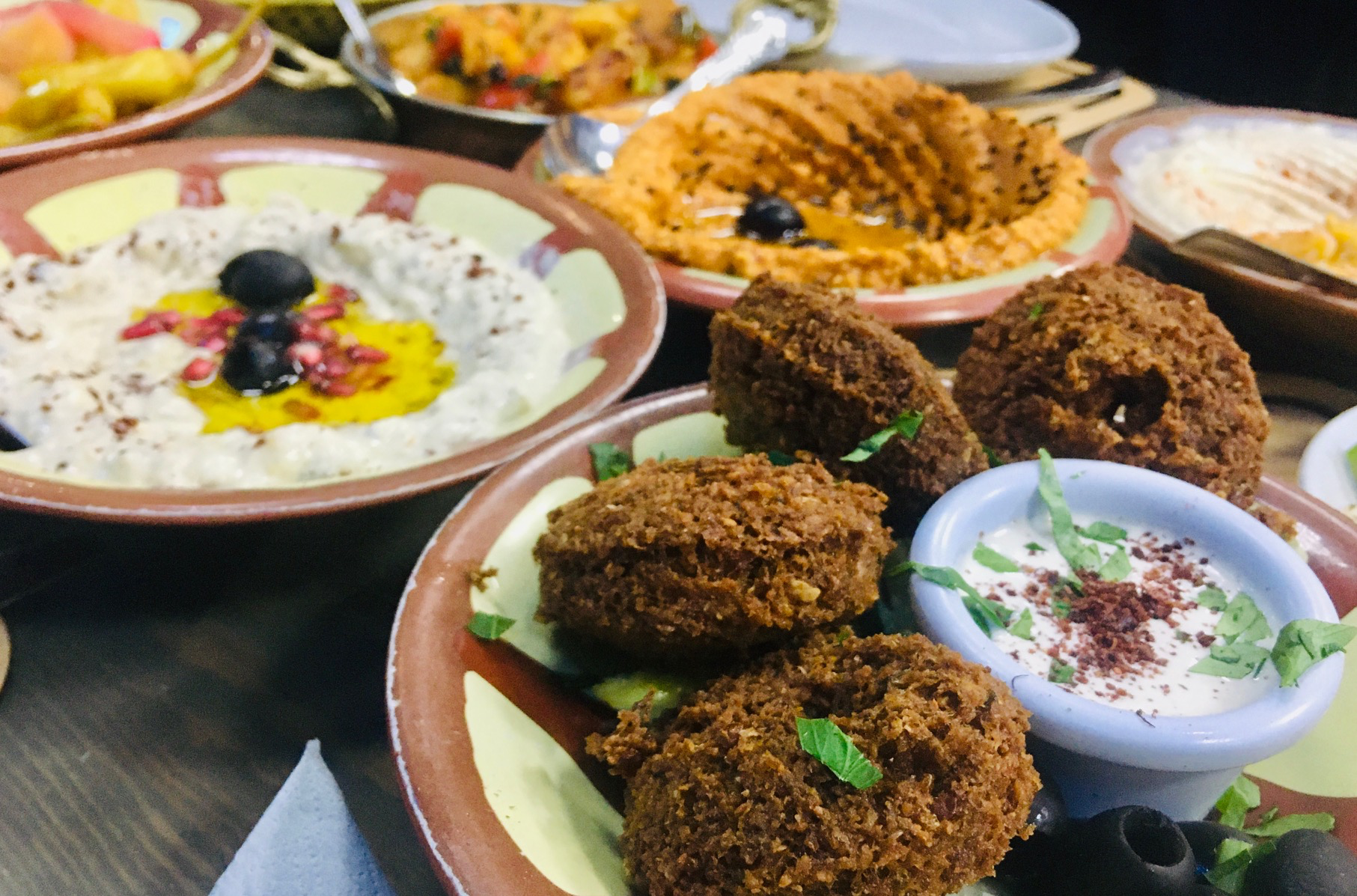 We universally agreed the star of the mezze is the smokey moutabal, delivering silky aubergines chopped with tahini in an olive oil rich dressing. Hummus times two, one more coarse and providing colour and sweetness thanks to red peppers. The balls of falafel are as good as those at Cappadocia a short walk away, leading on to the final warm dish of batata harra – roasted cubes of spud with peppers, coriander and a heavy dose of garlic combined with a not so subtle kick of chilli. A bowl of pickled veggies and flatbread to mop up the dips accompanied the (enormous) fattoush salad, leaving us all full before we even see the incoming meat platters. 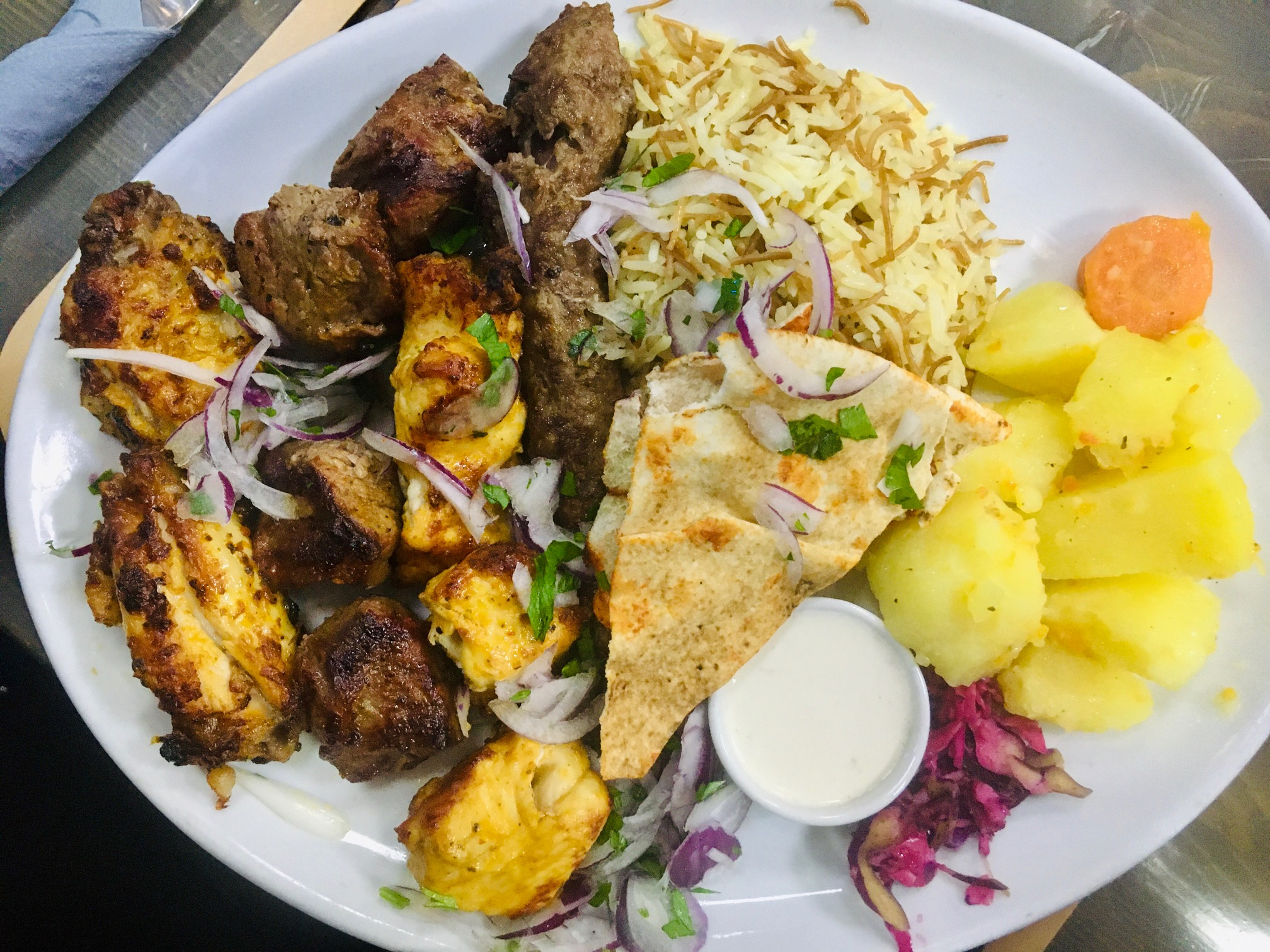 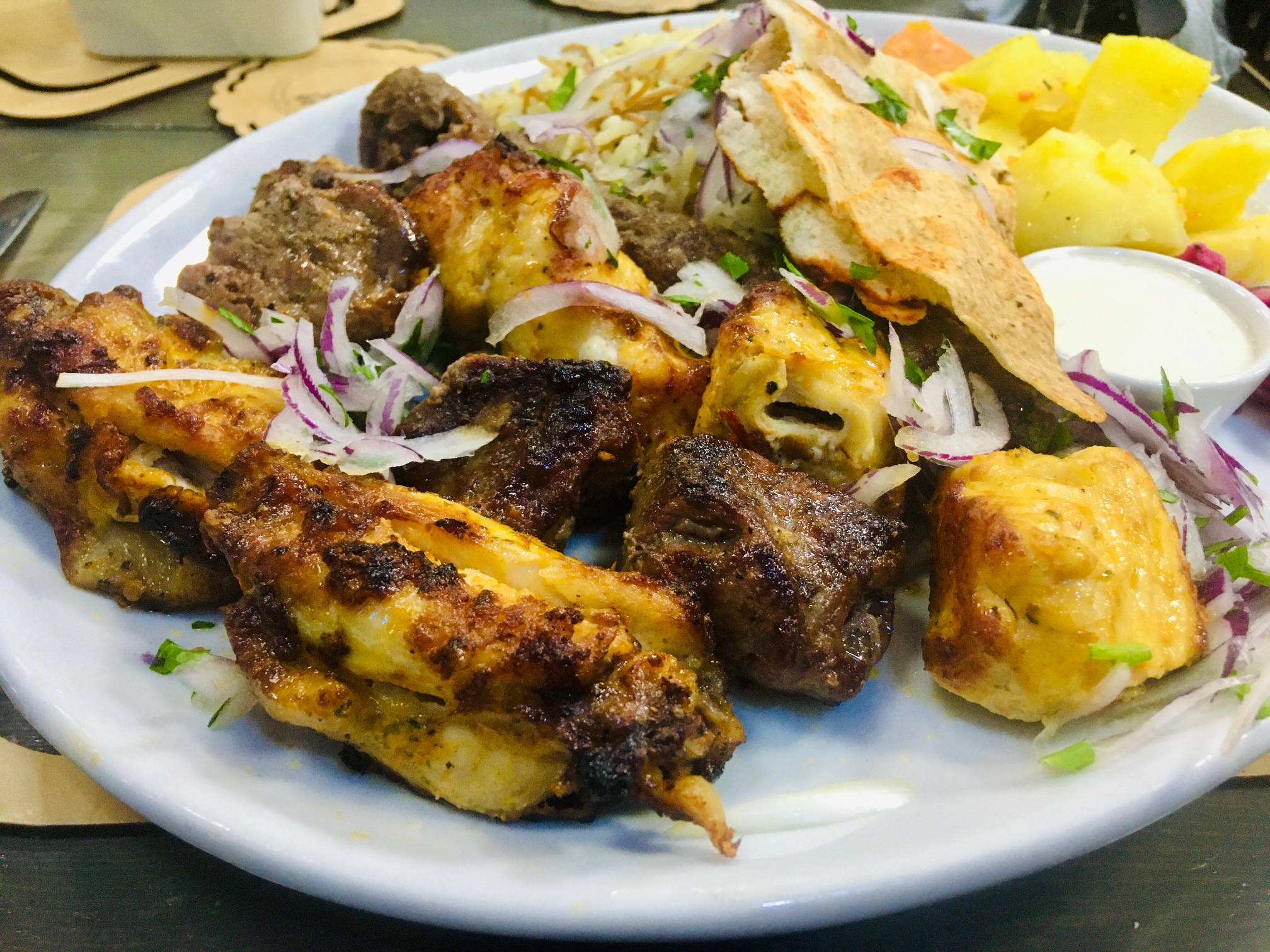 Mixed grills covered the table, piled with various pieces of lamb and chicken. Tender charred chicken wings got demolished first, leading me to a minced lamb skewer I decided wasn’t interesting enough to keep me away from the much juicier chunks of the same animal. Grilled to a perfect pink with nice fire-kissed seal, I put most of my attention into that along with mouthfuls of probably-too-salty-but-jolly-satisfying rice and definitely too-soft boiled potatoes. The heaving plate also included pieces of chicken breast, bread and salad, in case you have two stomachs and a positive mental attitude. It’s a lot of food for under £12, even if you don’t have any starters. 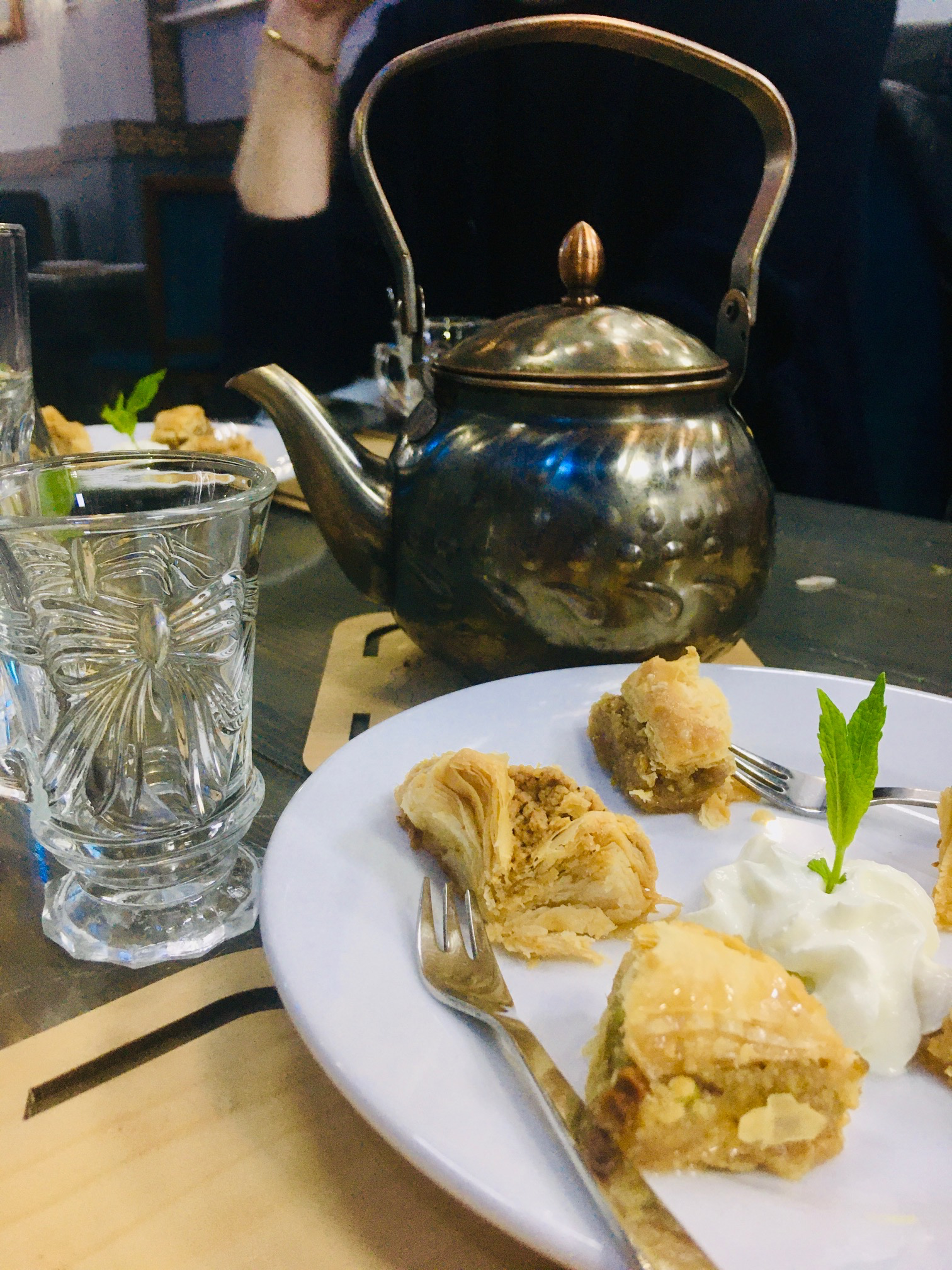 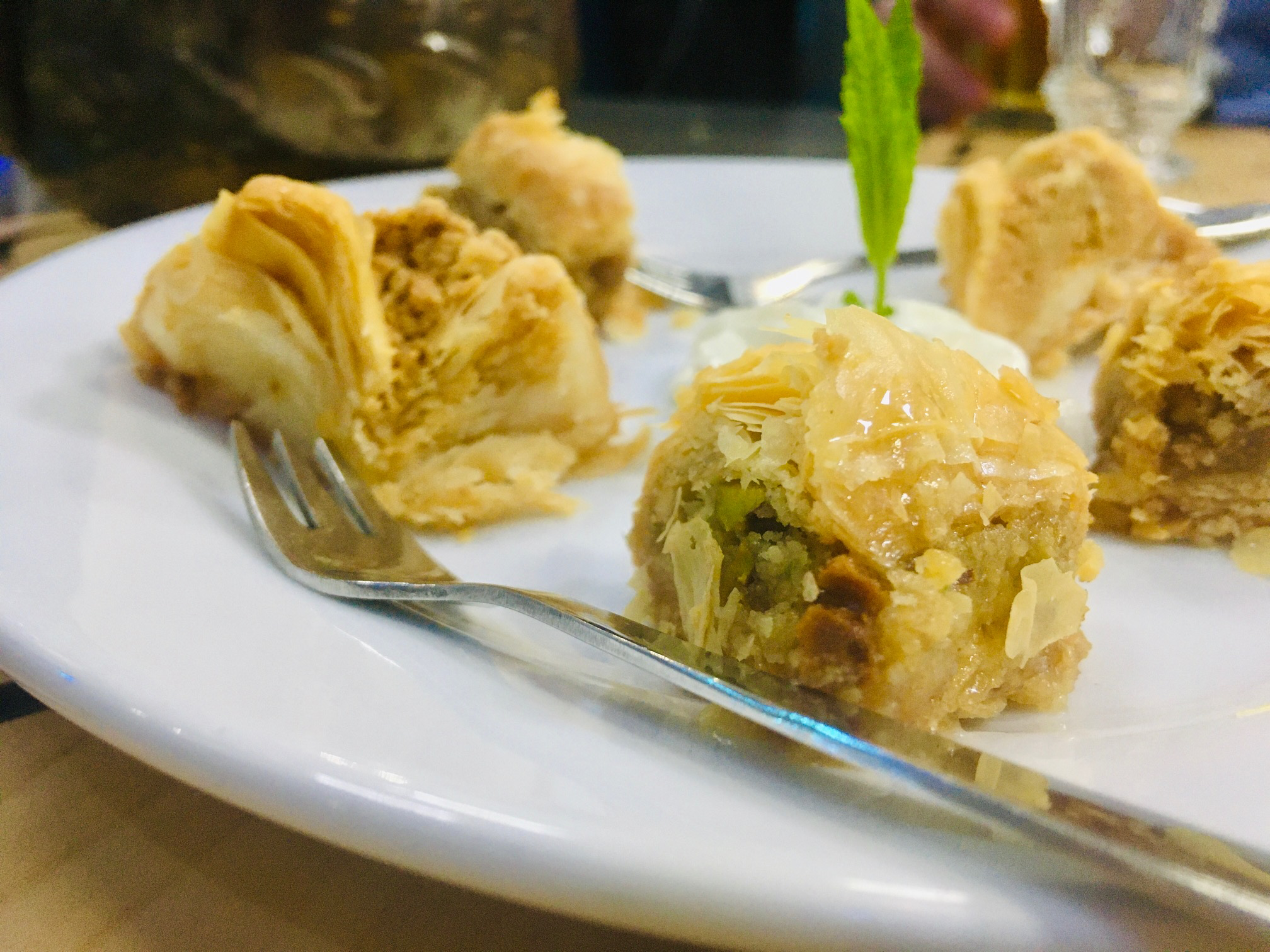 Our meal concluded with mouthfuls of sticky sweet baklava and glasses of a mint tea that actually makes you like mint tea. We were left alone to chat away another half an hour without being rushed or interrupted, totalling two hours of informal feasting. It’s not new, it’s not reinventing the wheel, and it’s not trying to be Instafamous with the blaggers, but it’s humbleness and desire to ensure you leave both happy and harbouring a meat and mezze-based food baby is really rather lovely.

It’s somewhere I’d all but forgotten about with so much choice within the city centre, but Syriana reminded me why it’s important to visit places that have been here way longer than most and just quietly get on with it. It’s stuck around when others have failed for a reason, right?

Disclosure: We paid in full. All words and photos are mine. Don’t forget Syriana operates a bring your own booze policy.

Don’t want to alarm anyone, but @mozi78 has suggested a game of monopoly later..