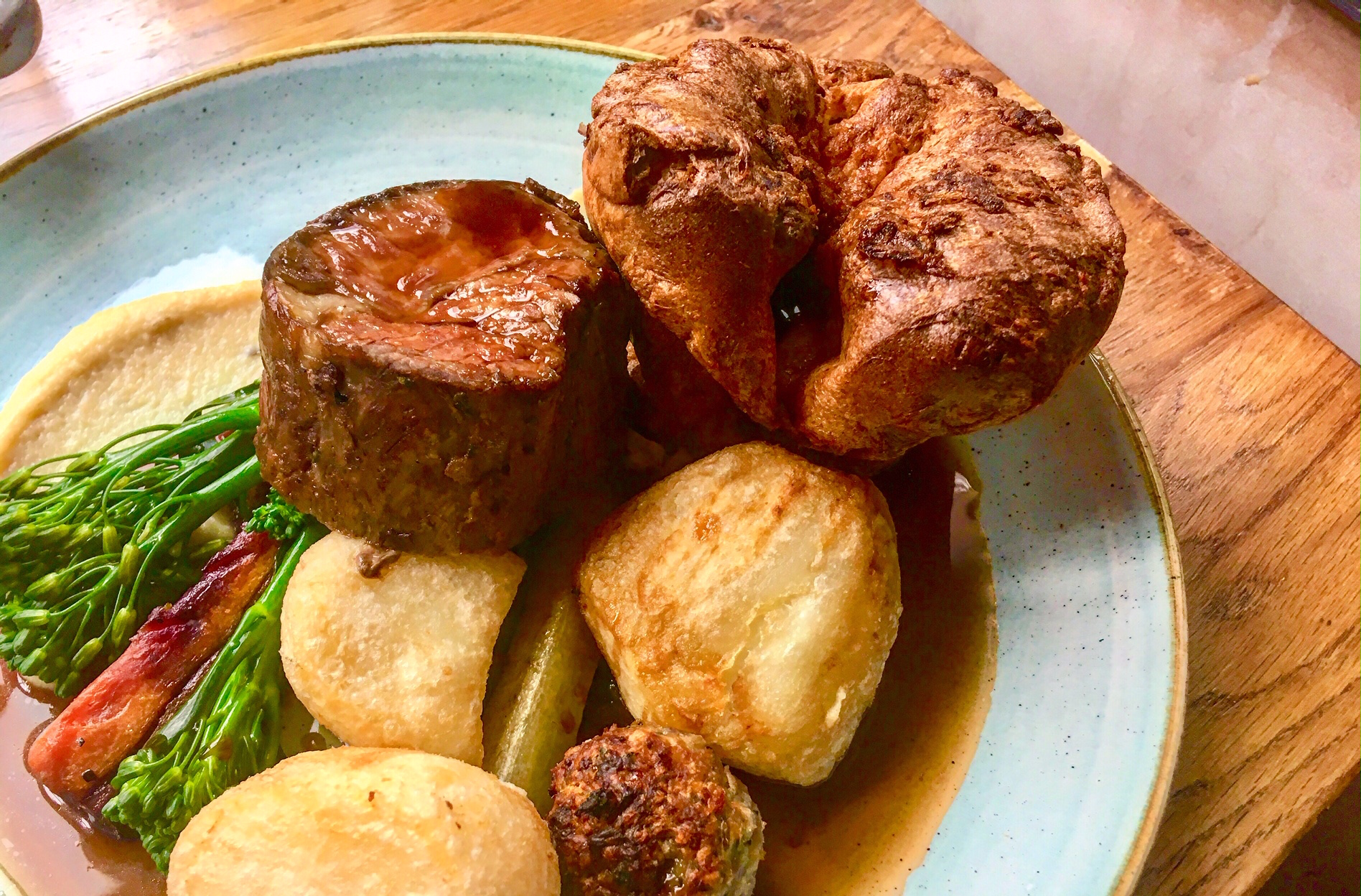 Ages ago, in a time before Boris and women wearing spider broaches made old men wobble with rage, I wrote a post about my favourite places for Sunday lunch in Brum.

It continues to be one of the blog’s most popular posts to date, getting lots of views every weekend even if it’s hot outside. I always find that quite weird because, if you believe what you often read on social media, it’s not particularly cool or sophisticated to enjoy a massive plate of carbs and gravy anymore. Some folk seem to really dislike a traditional Sunday lunch, probably because they’re quite heavy and often leave you needing a nap (the food not the people), but that’s sort of why I enjoy them. I’m also married to a northerner, who considers gravy a food group and can often be heard shouting ‘is there nowt moist?’ in restaurants.

I’ve always enjoyed Sunday lunch, meaning I’ve been a basic bitch since the spring of 1985. It contains all my favourite food groups aside from cheese, and even then I often order a side of cauli cheese to rectify that. I like being full, I enjoy feeling rotund on a day I have nothing else to do, and I like eating dead things with fat-laden spuds. In short, I bloody love a roast dinner. Since the original post last Christmas, I’ve returned for more at some favourites and I’ve tried the offerings at new venues. Some have been great and others have left me bored enough to fall asleep midway through the meal faster than human pipe cleaner Rees-Mogg at work. 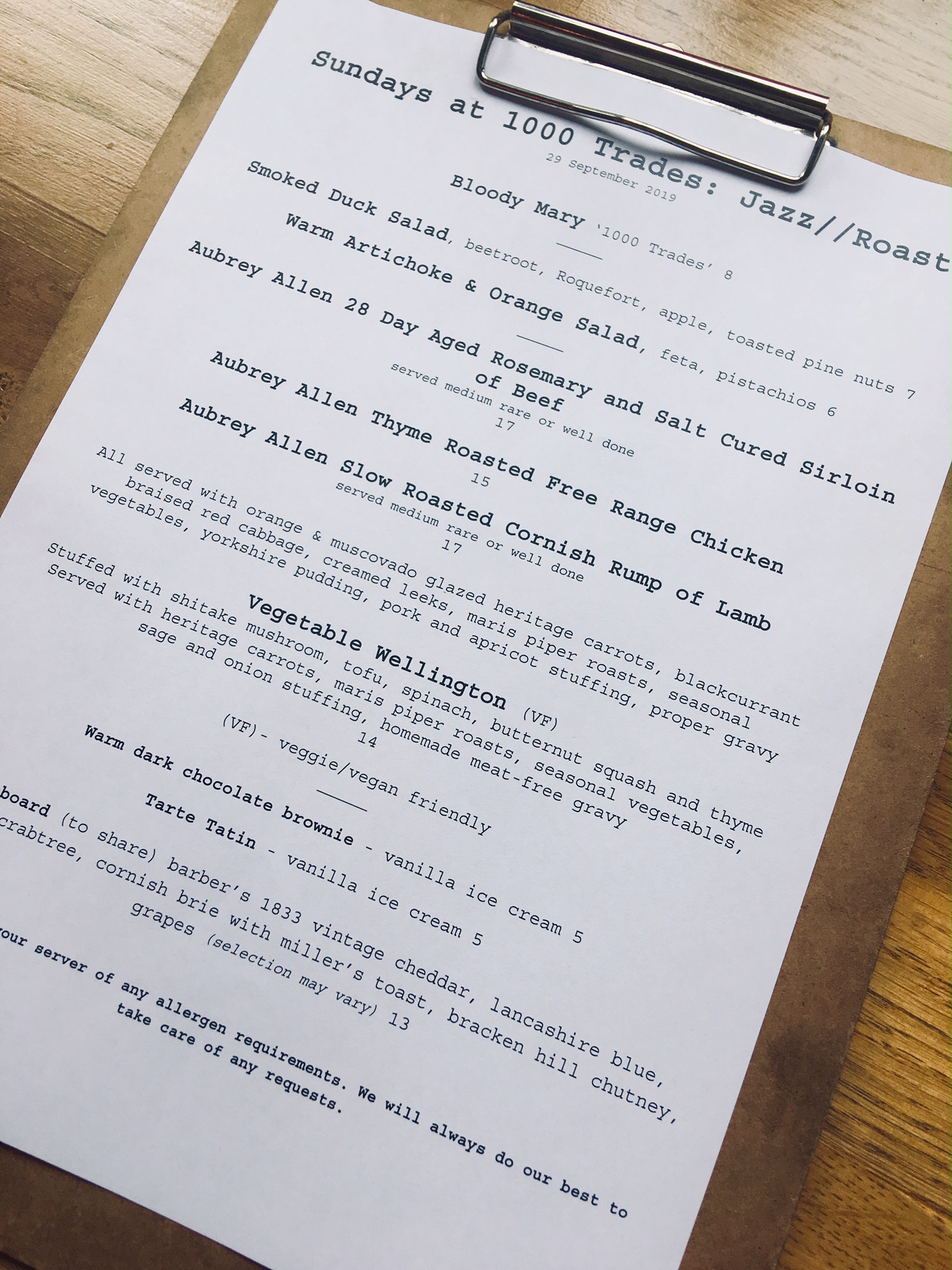 It costs me a fortune and means I’ve gone up a dress size, but when you find a goodun you want to tell people about you pop your fat pants on and grab the laptop. Last weekend we hit a good 8/10 on the roast dinner scale, having booked a table at 1000 Trades in Jewellery Quarter. I like this pub a lot, spending many nights propping up the bar with my husband as we annoy the curly haired dreamboats manning the booze. A lovely independent, this place has a rotating menu midweek alongside the ‘Jazz Roast’ on Sundays. It’s always busy and you need to book in advance come le weekend if you want to be guaranteed a table – a bit like it used to be in Bodega…. before it got shit. 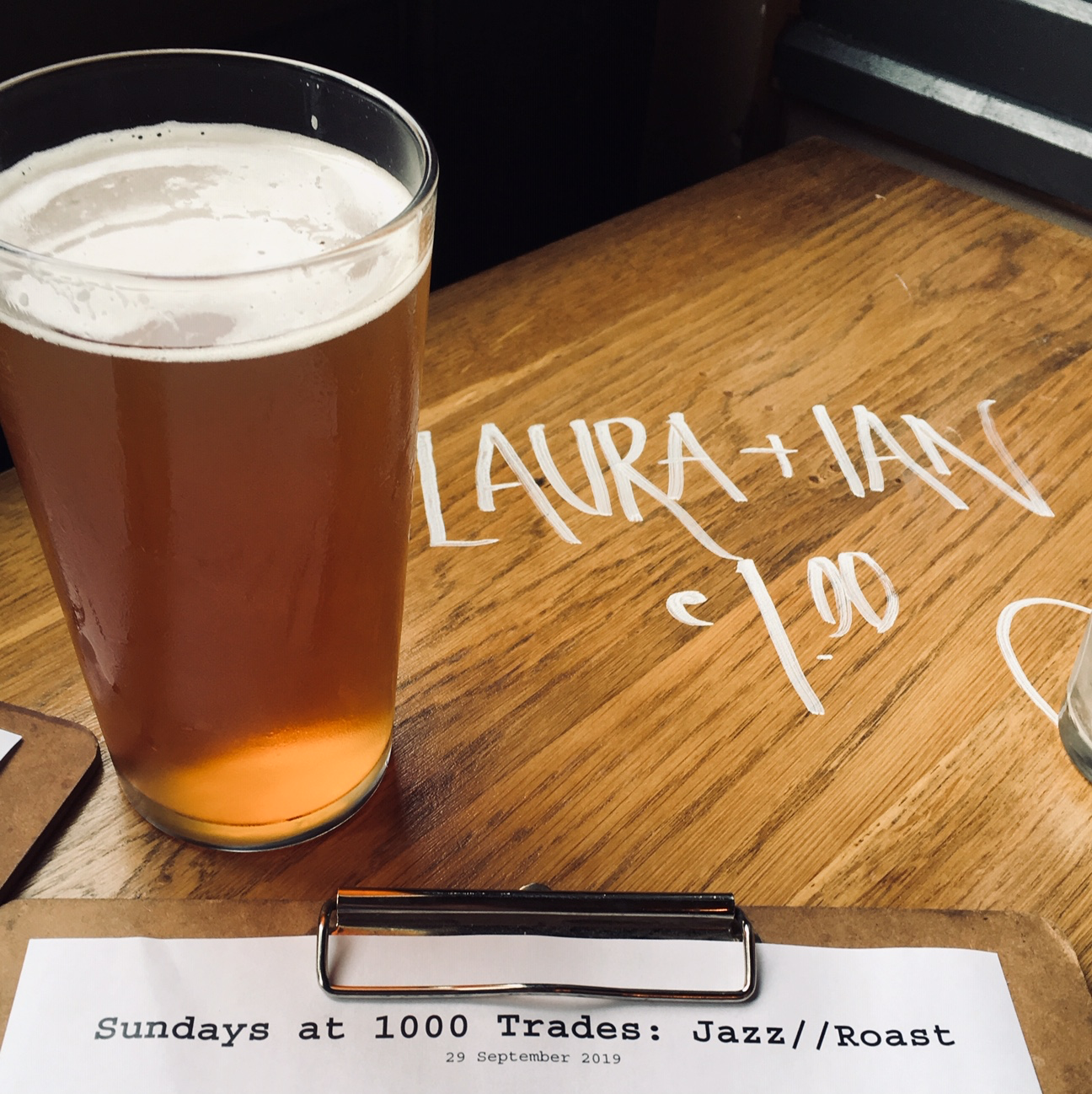 The Jazz Roast offers substantial dinners enjoyed with live music. As a rule I don’t really like jazz (I bet Boris likes a side of jazz while he counts his gold coins and illegitimate children) but this is all very relaxing and unobtrusive. Less Howard Moon and more two chaps who live locally blowing their trumpets and strumming a double bass politely. It’s all very relaxing and feels in keeping with the Sunday experience at Trades anyway. 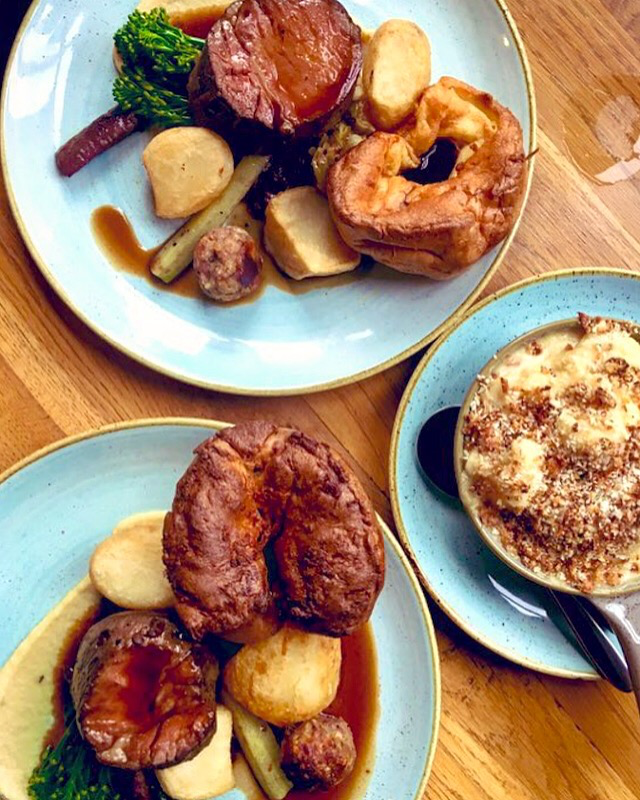 There’s a few starters available but we headed straight into the main event. The menu that weekend included beef, lamb and chicken, all coming in around £15-17. There’s a veggie option for less but I can’t really remember what it is because I like cooked cows. It’s not a cheap Sunday lunch and there’s certainly others in the area that will charge you a lot less (The Wolf does a cheap and cheerful one for a tenner if you use your IB card) but the one thing you’ll get here over anything is quality ingredients. The meat all comes from the chaps at Aubrey Allen, including the colossal piece of beef we both ordered. 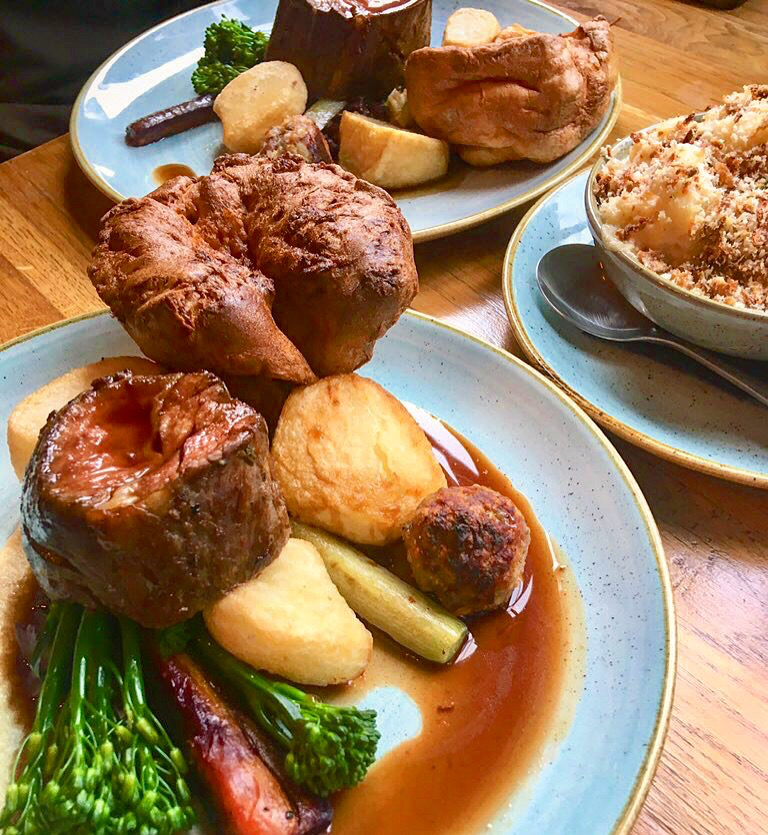 The plate of food is undeniably large, with a more than generous slab of rosemary kissed meat – cooked how you like – and a pretty much perfect Yorkshire pudding. I turned mine into a gravy boat (resulting in us having to take lovely Will up on the offer of another jug) because I’m a 34 year old toddler. Tender as the meat was, the thickness of the cut meant we could’ve benefited with steak knives but Ian still managed to make short work of it all.

Good sized roasties could have done with being a bit fluffier and I prefer a crispier surface licked by fat, but they tasted good as part of the hefty veg portion. Alongside some delicious creamed leeks (hidden under the yorkie like my abs below my food baby) orange glazed heritage carrots and some green things. A side of probably unnecessary cauliflower cheese isn’t that cheap at £5 and could do with being softer – I’m all for firm veg but this was a bit brick like – but the thick sauce and crispy onion topping was lip-licking tasty. 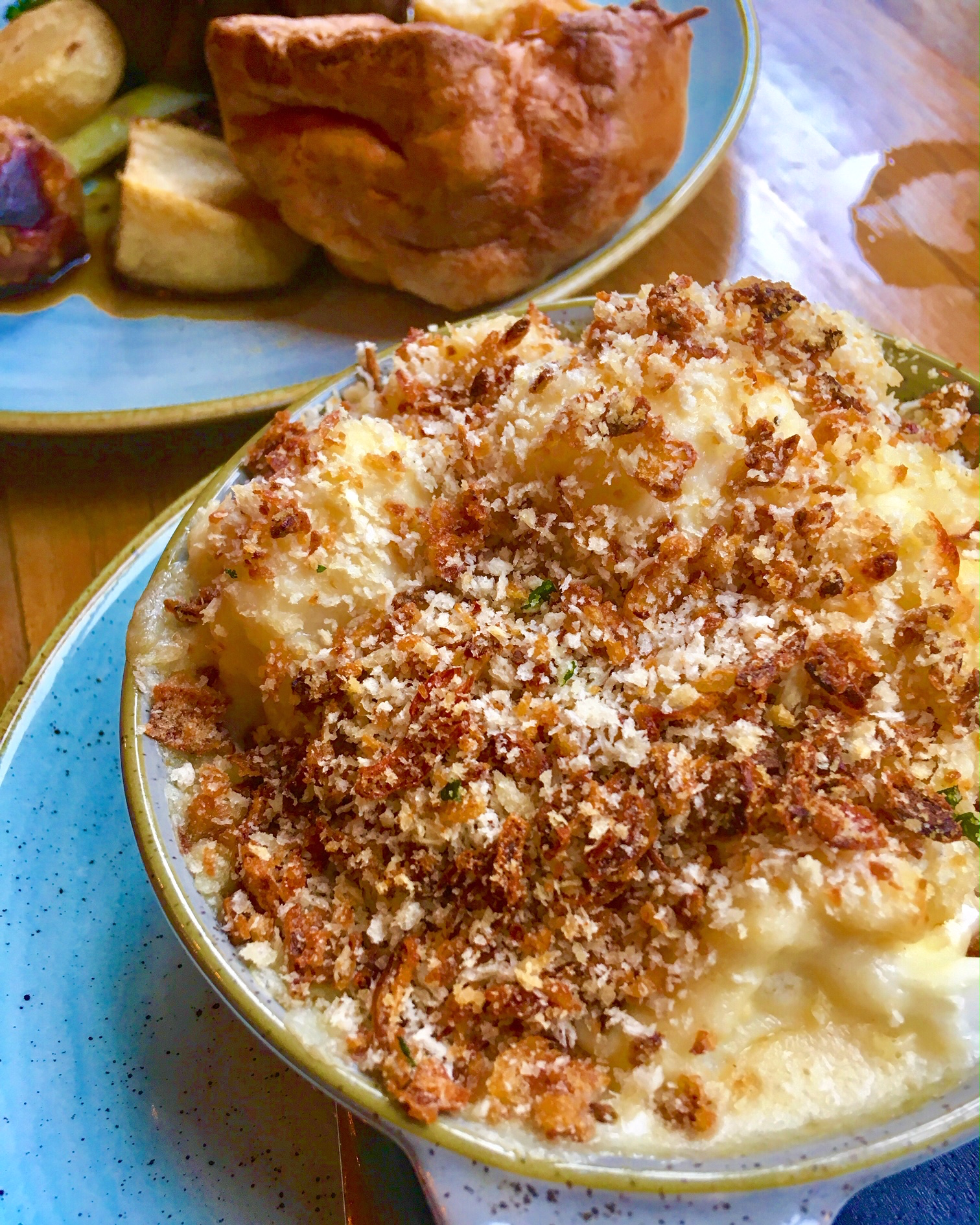 The bill for two roasts plus a side of caulicheese came in just under £40, add on a couple of beers your looking around £50 a couple. For the volume and quality of the meat alone I can see the value in the roast here, and there’s plenty to like about the offering at 1000 Trades. I’d like softer veg and crispier spuds but that’s a personal gripe; the free-running gravy and pork and apricot stuffing more than made up it that anyway. 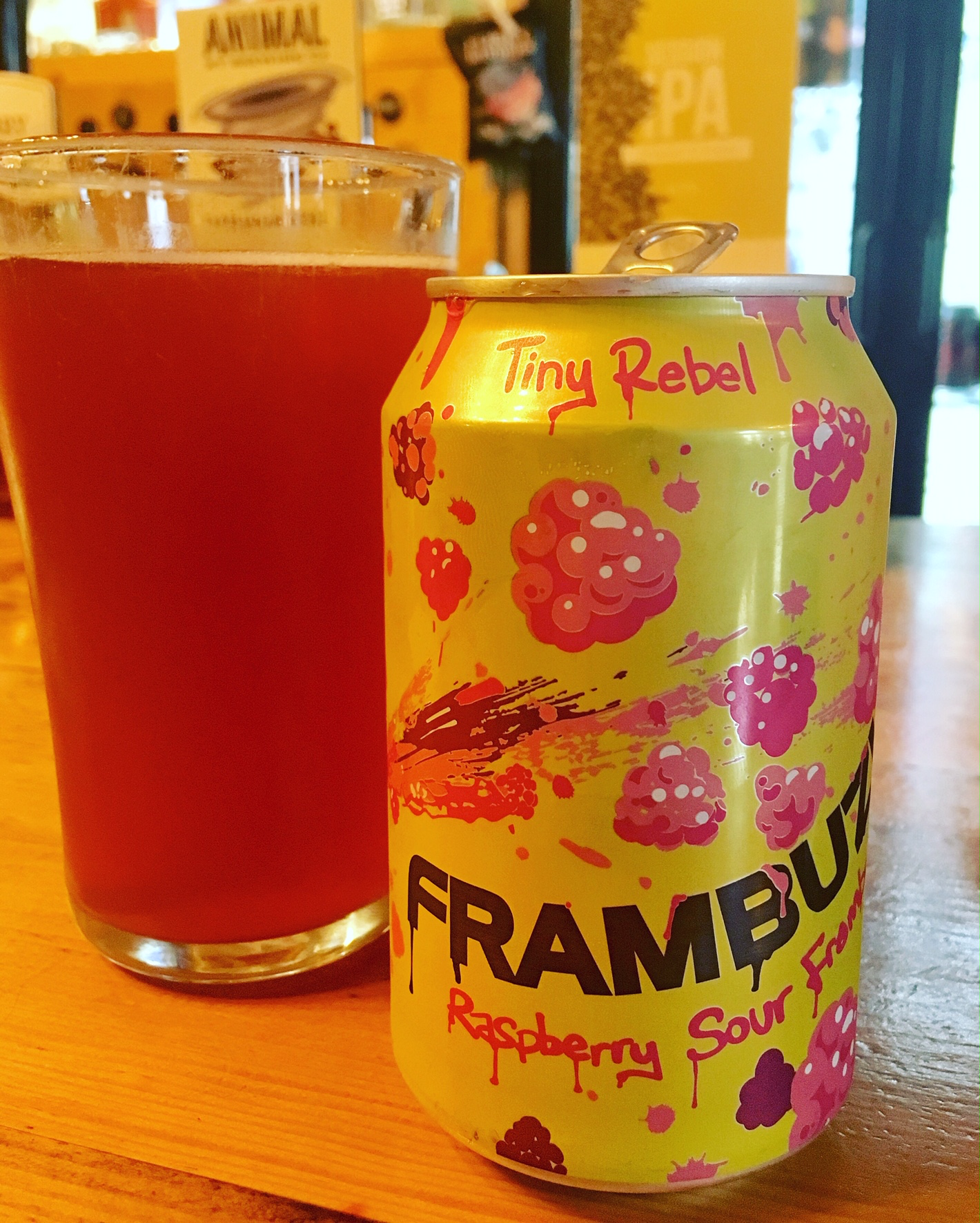 There’s a different buzz on a Sunday, with more of a family over friends vibe to the place. Also, there’s a smashing ever-changing beer selection available, including Tiny Rebel and local legends such as Burning Soul. You can read my previous post about Sunday lunches in Birmingham here and if you know where I can buy an oversized spider broach from to ward away gammons please do let me know.

Disclosure: we paid for the meal in full including drinks. All words and photos are mine, except one that Ian ‘Snappy Snaps’ McEwan took.