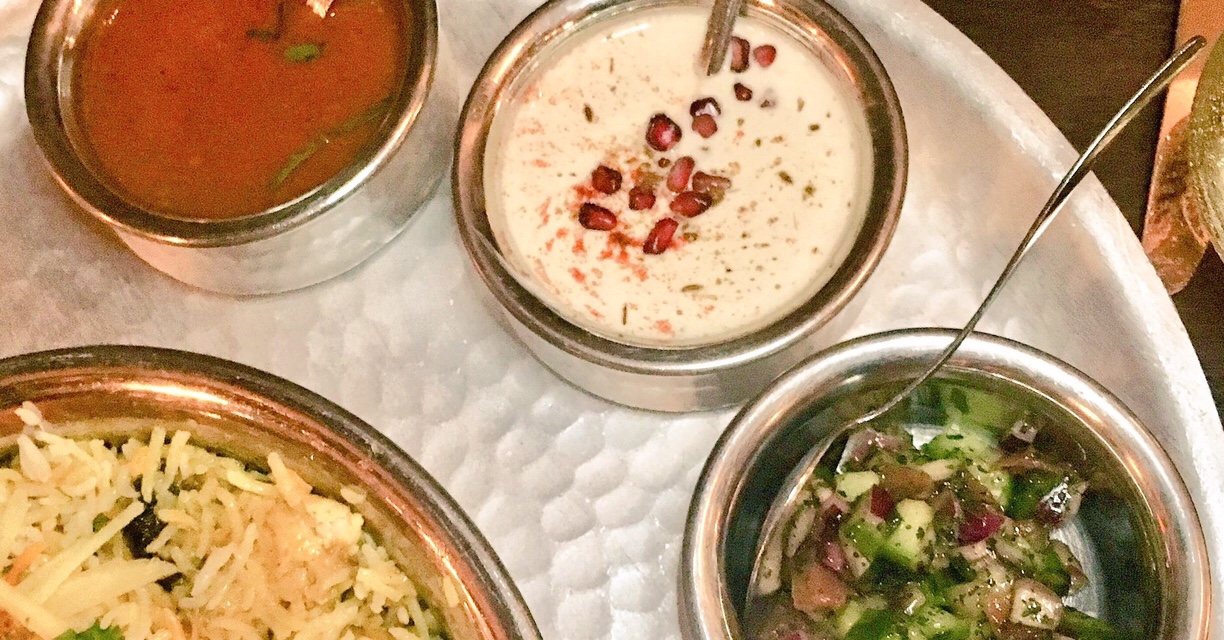 It was sort of bittersweet that I ended up losing my Itihaas virginity on the same day a spicy soup exploded in my (expensive, suede) work handbag.

I arrived at the restaurant with a faint whiff of cumin about me (it’s always mildly disconcerting when a restaurant’s waiting area smells fresher than you) and had my coat taken with a welcoming smile. Despite a day of melodrama, that also saw me having to get changed in the ladies loos at Snow Hill Station, I sauntered into Itihaas’ beautiful restaurant bright eyed and ready for a feast. 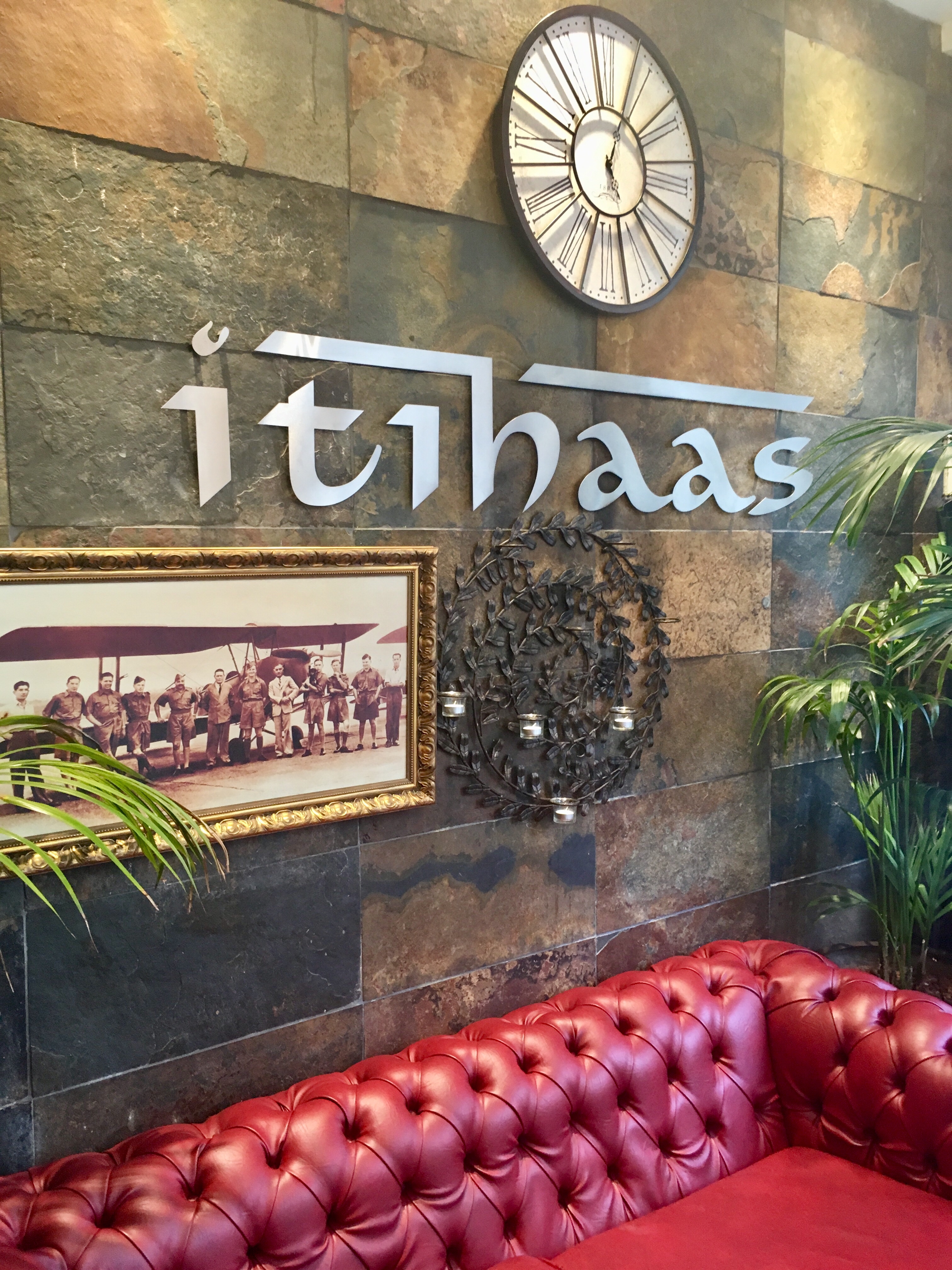 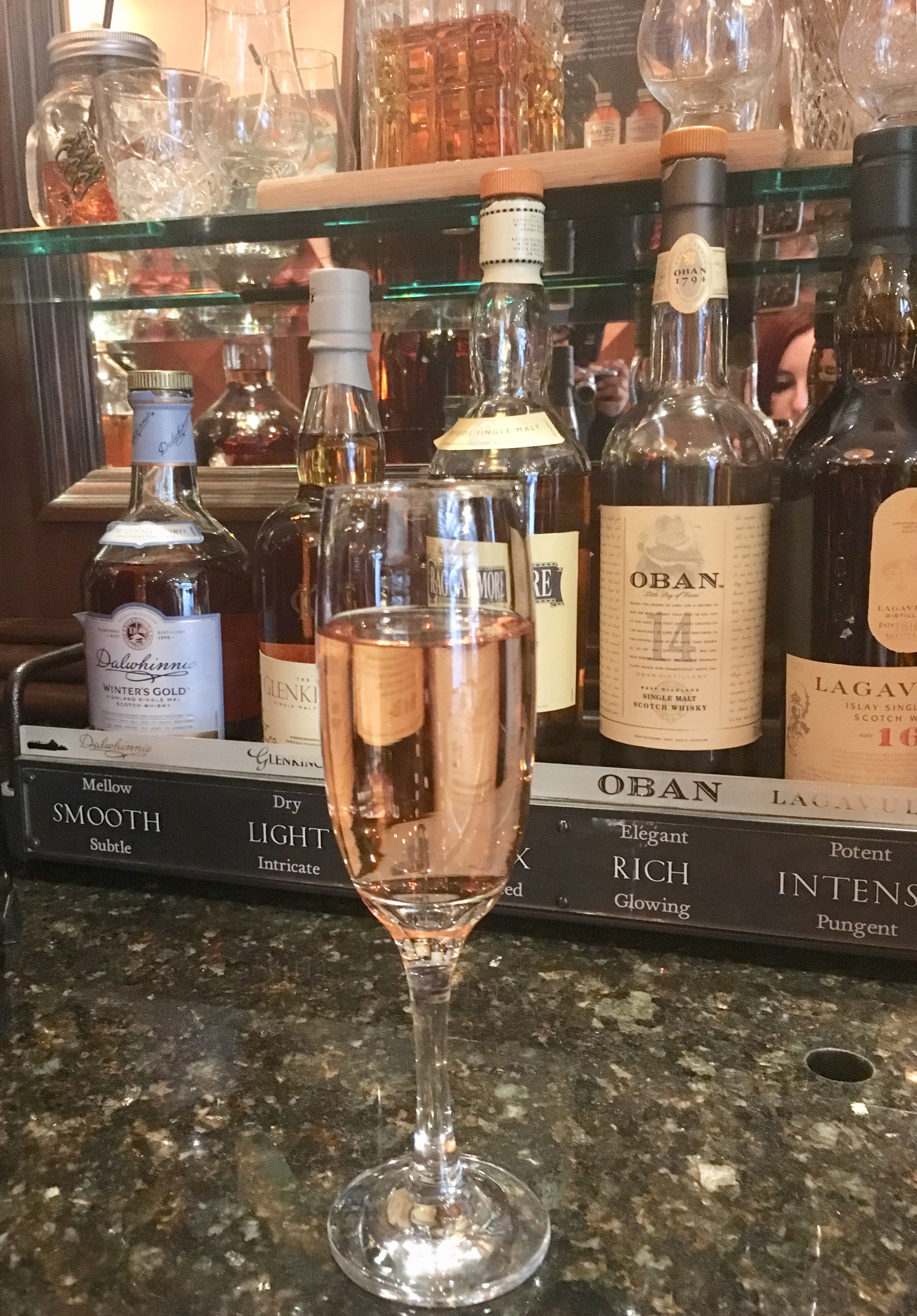 I hid my shambolic faffing well (I had a moan immediately) heading straight to the bar for a much needed drink. The upper floor space is attractive and inviting, but it was the basement room looking out over the canal we’d be dining in. That sounds more ominous than intended; the room itself is bright, vibrant and full of character. The evening began with canapés including Allo Tikki Channa Chaat, and flutes of Rose Champagne. It’s a hard life, I know. Dinner was to be served next to the swing doors of the kitchen with a set menu. I was dining as a guest of the venue rather than choosing a la cart, and the menu was prearranged for us. Luckily the choices were fantastic and probably better than anything I could have chosen for myself after 6 fizz cocktails. 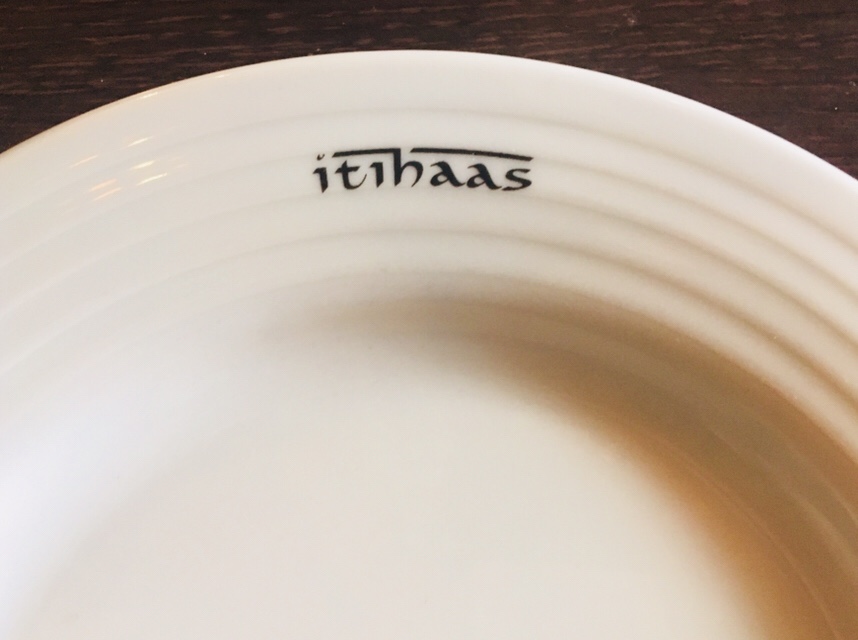 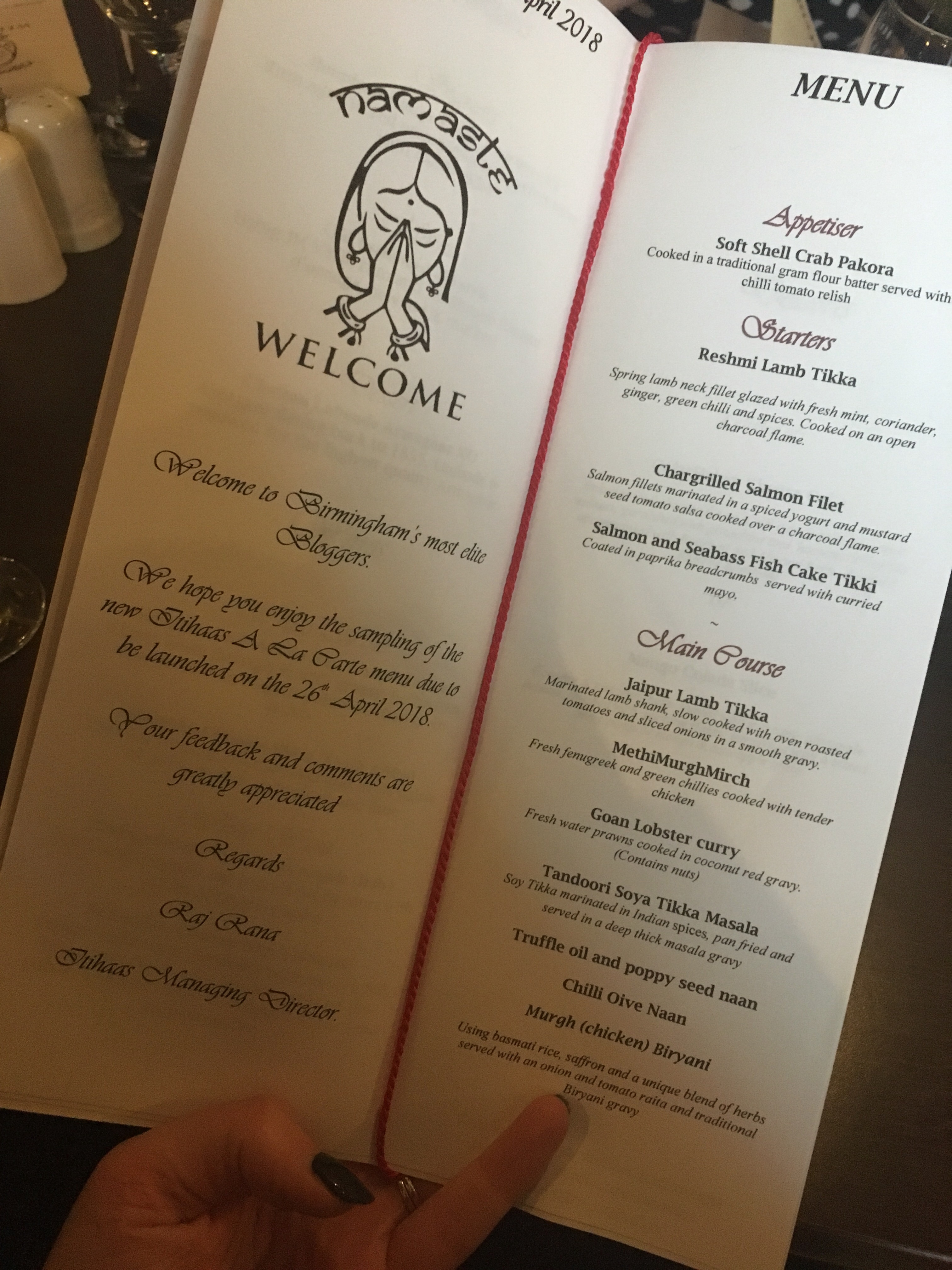 Our meal began with Soft Shell Crab served with a tangy tomato relish. It was lovely, inspiring even, mainly because of the seasoned gram flour batter it’d been fried in. As visually striking as it was tasty, I demolished it in 30 seconds after this photo was taken. I incorrectly assumed this gem was our starter, but that was still to come via a taster plate. Lamb Tikka, Chargrilled Salmon Fillet, and Seabass Fishcakes formed the platters, each offering smoky charcoal flavour or fresh herbs. My favourite of the three, the lamb, offered effortlessly fork-tender pieces of neck fillet, each gnarly edge spiked with warming ginger and chilli. 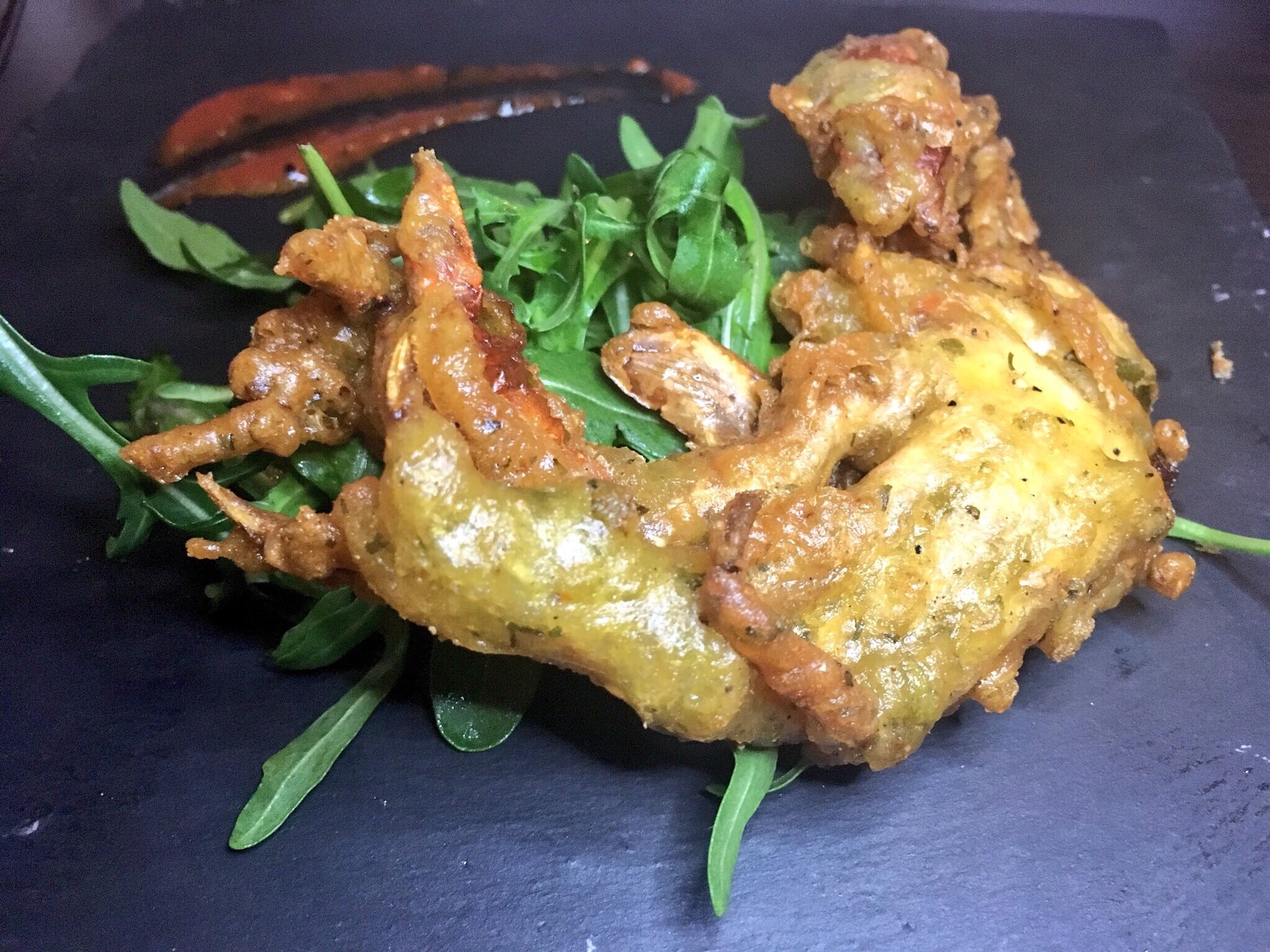 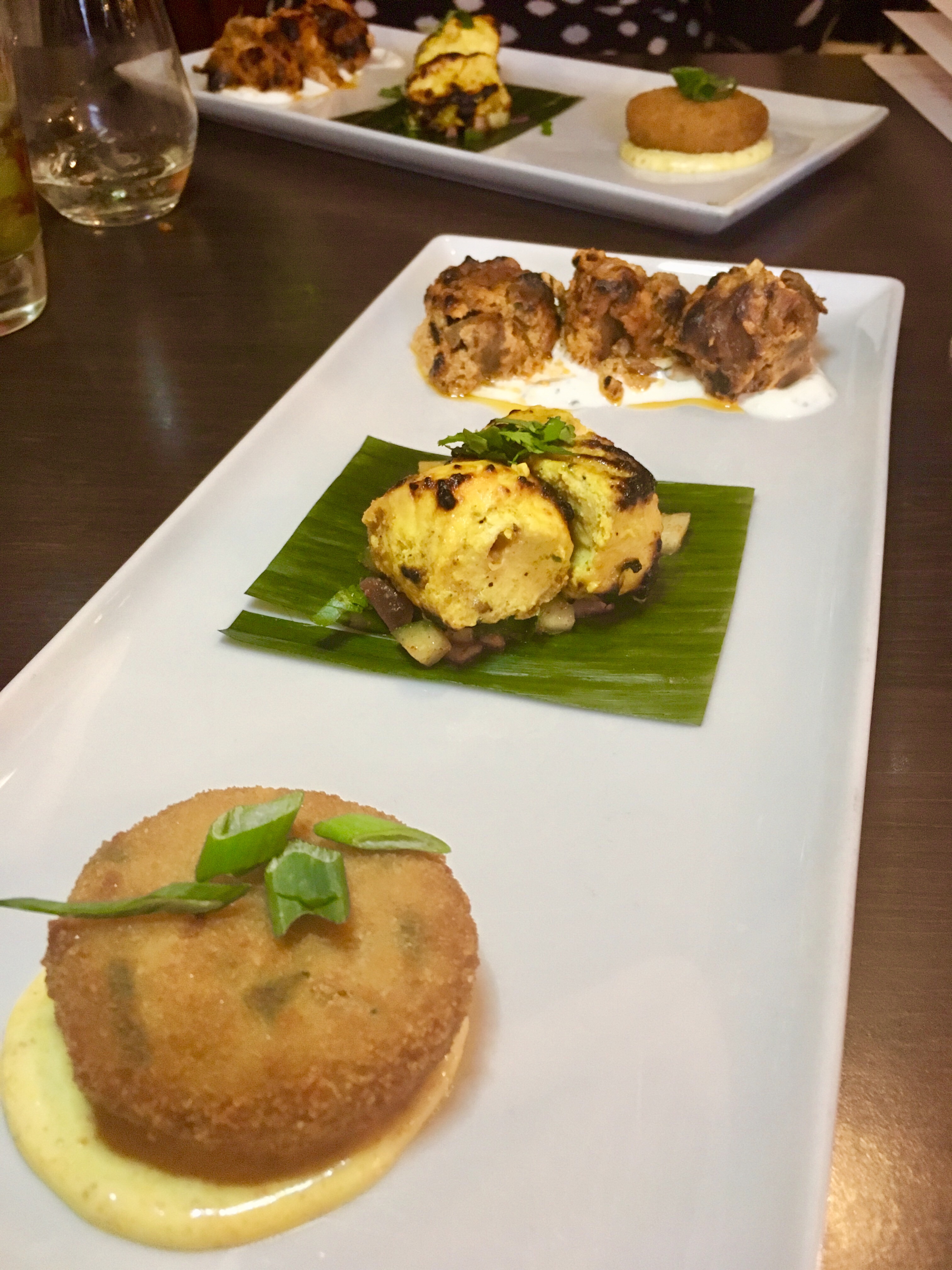 Time for the main event, and in true Indian style we were treated to an array of dishes to share. I love eating this way, food should be shared and talked about; food this good should be shouted about. A Murgh Biryani flavoured with saffron arrived first alongside a minted yoghurt and chilli sauce, with tender pieces of chicken nestled with the lightly spiced rice. A bowl of Goan Lobster Curry was my instant favourite, the thick gravy rich in coconut flavour. To me, this is as good as it gets, especially when mopped up with a delicious Truffle Oil Naan. 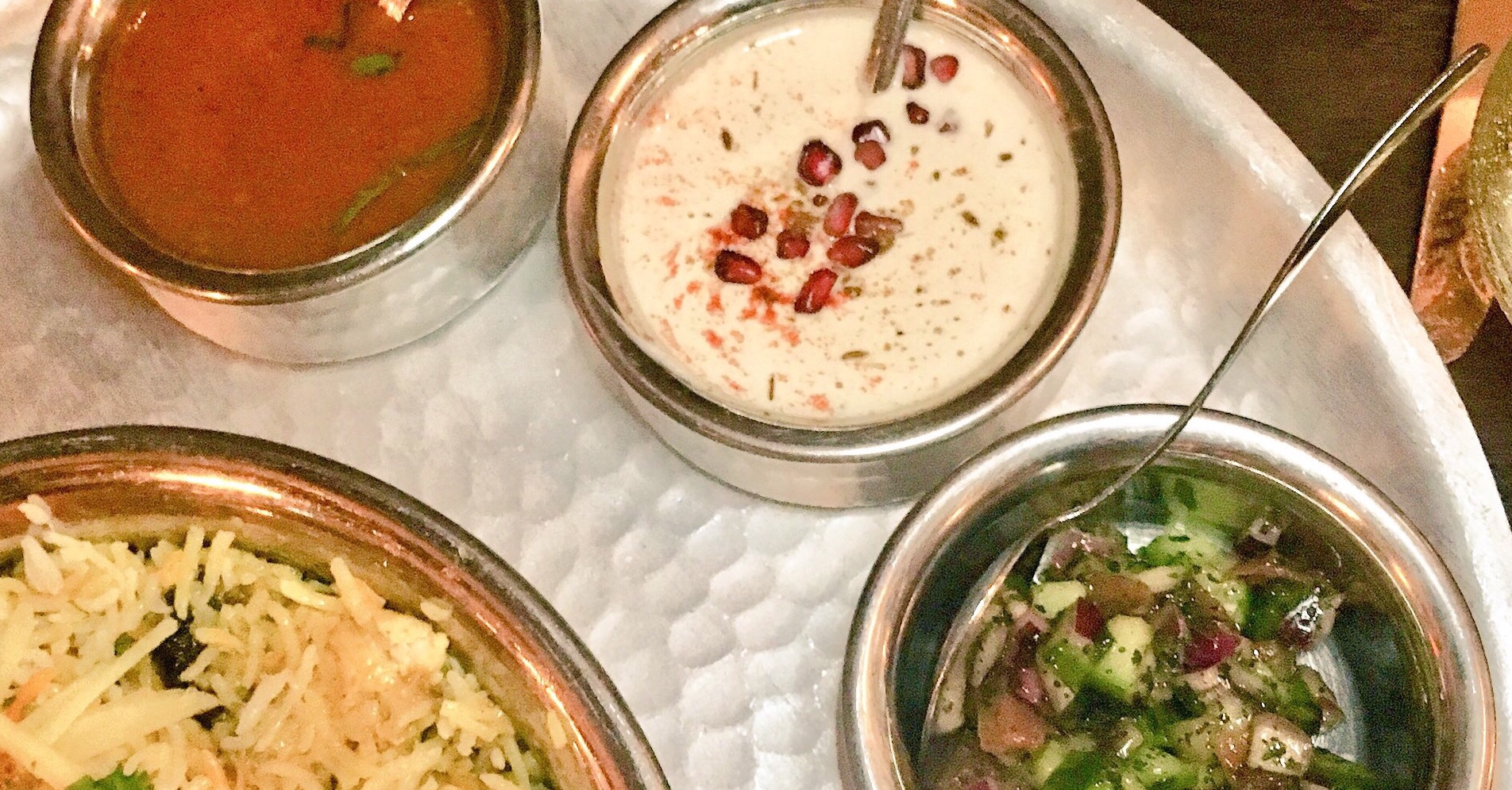 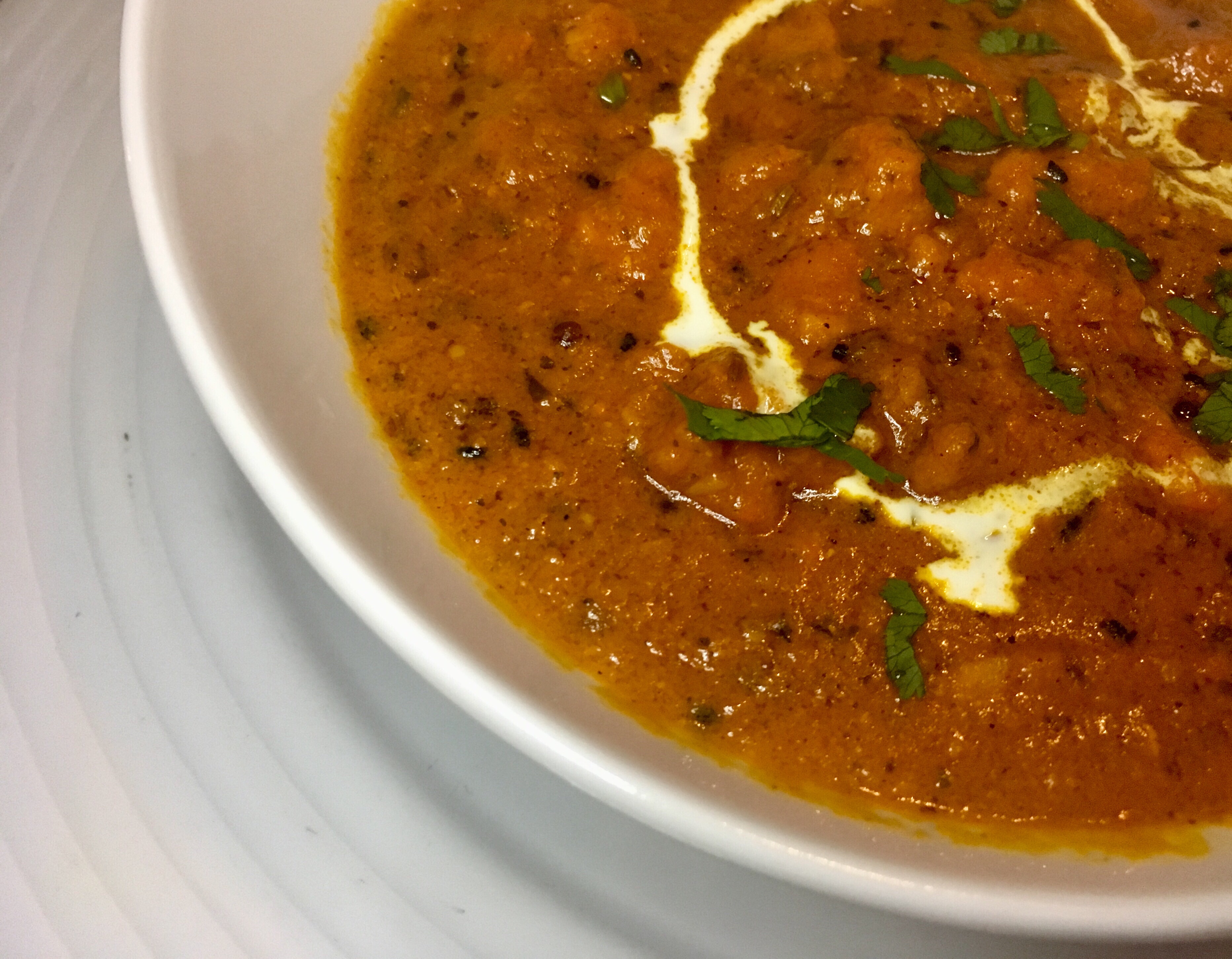 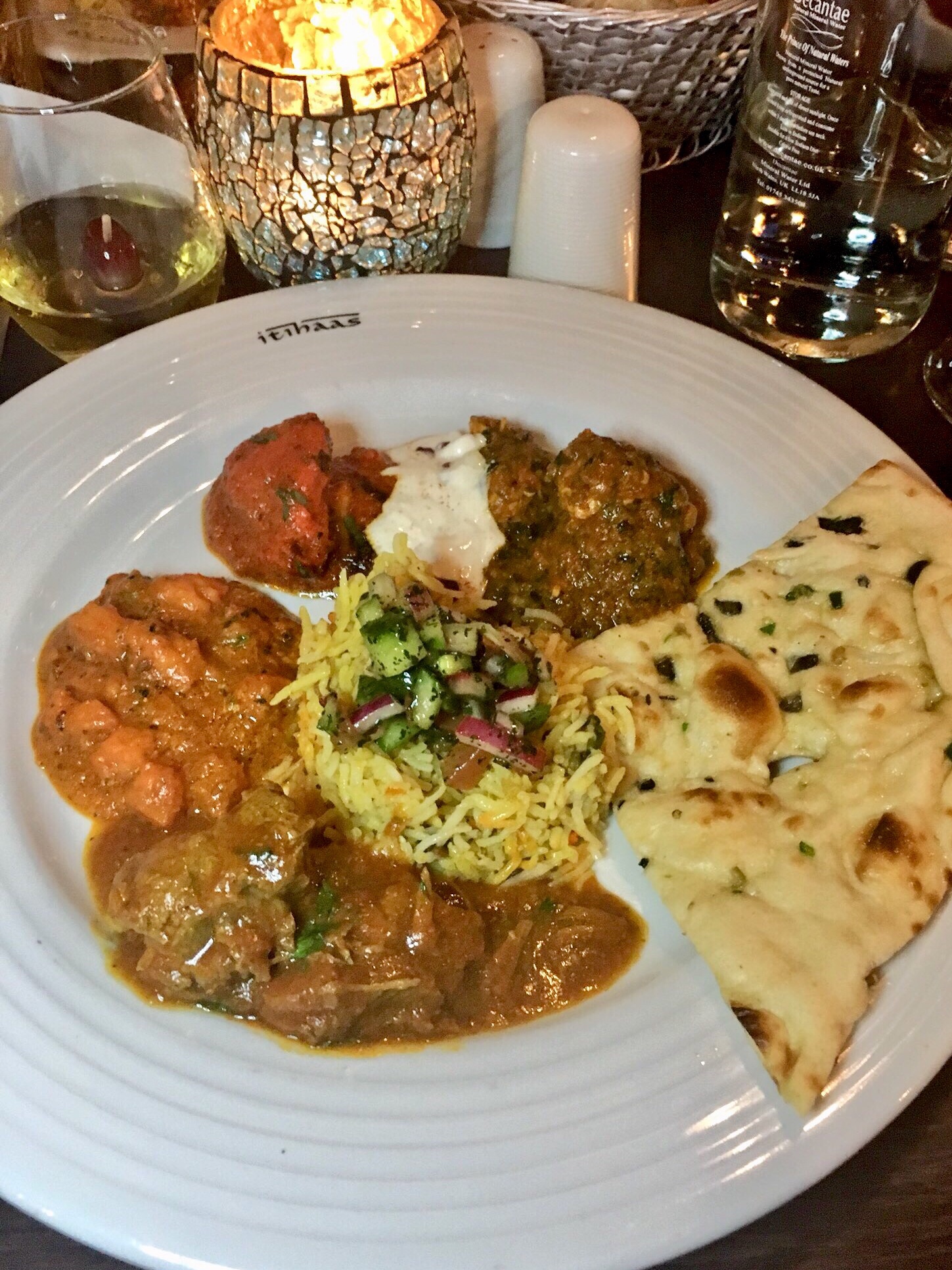 A fenugreek rich Methi Murgh Mirch quickly got demolished, with flavourful heat from green chillies, and walked all over a Tandoori Soya Tikka Masala that whilst pleasant didn’t quite have as much charm for me compared to the other dishes. Our final arrival, the Jaipur Lamb Tikka, had a decadent smooth gravy and I found myself dunking more of the pliable naan quarters eagerly. This course came paired with a very nice take on an Old Fashioned using JM VSOP rum. 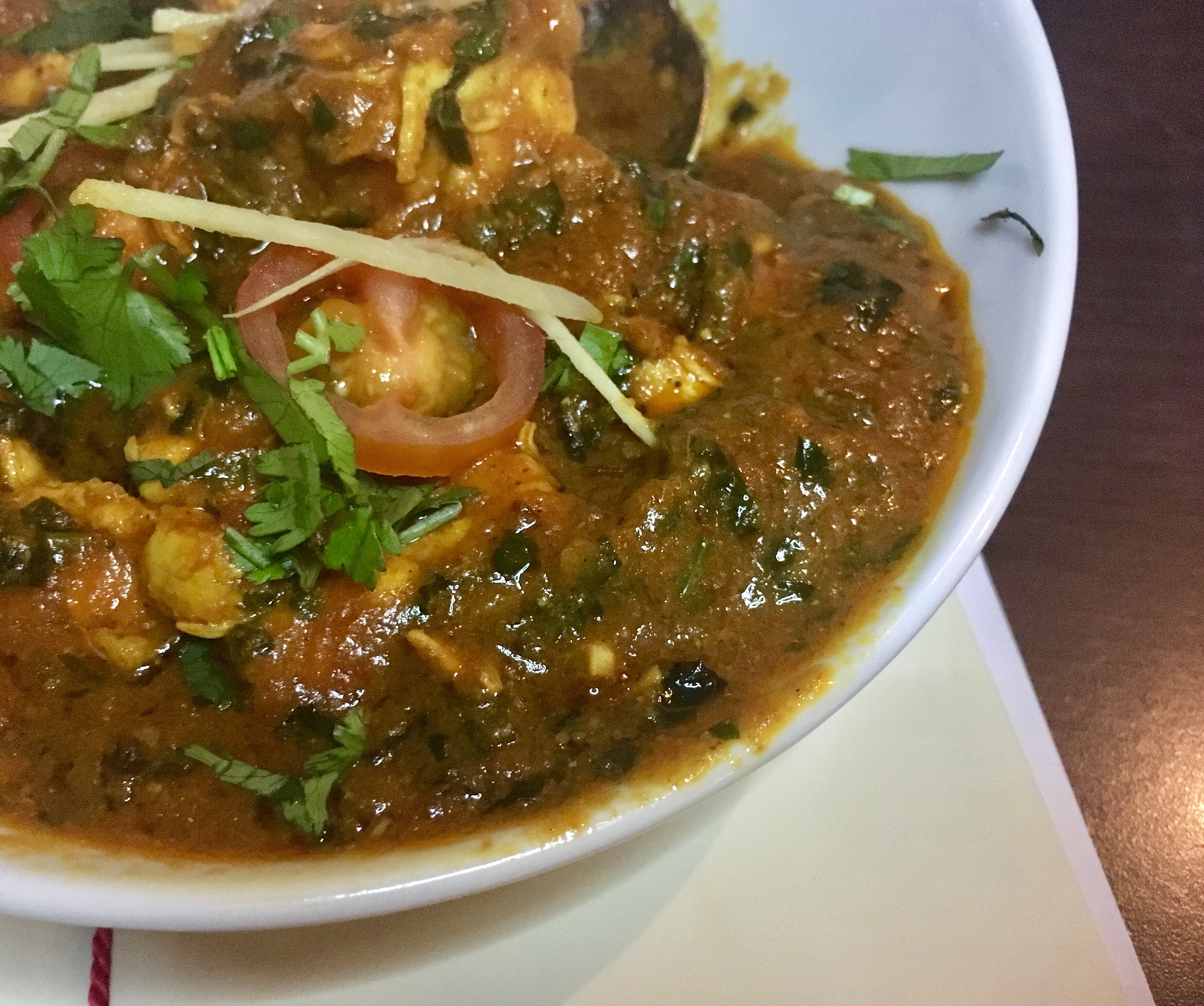 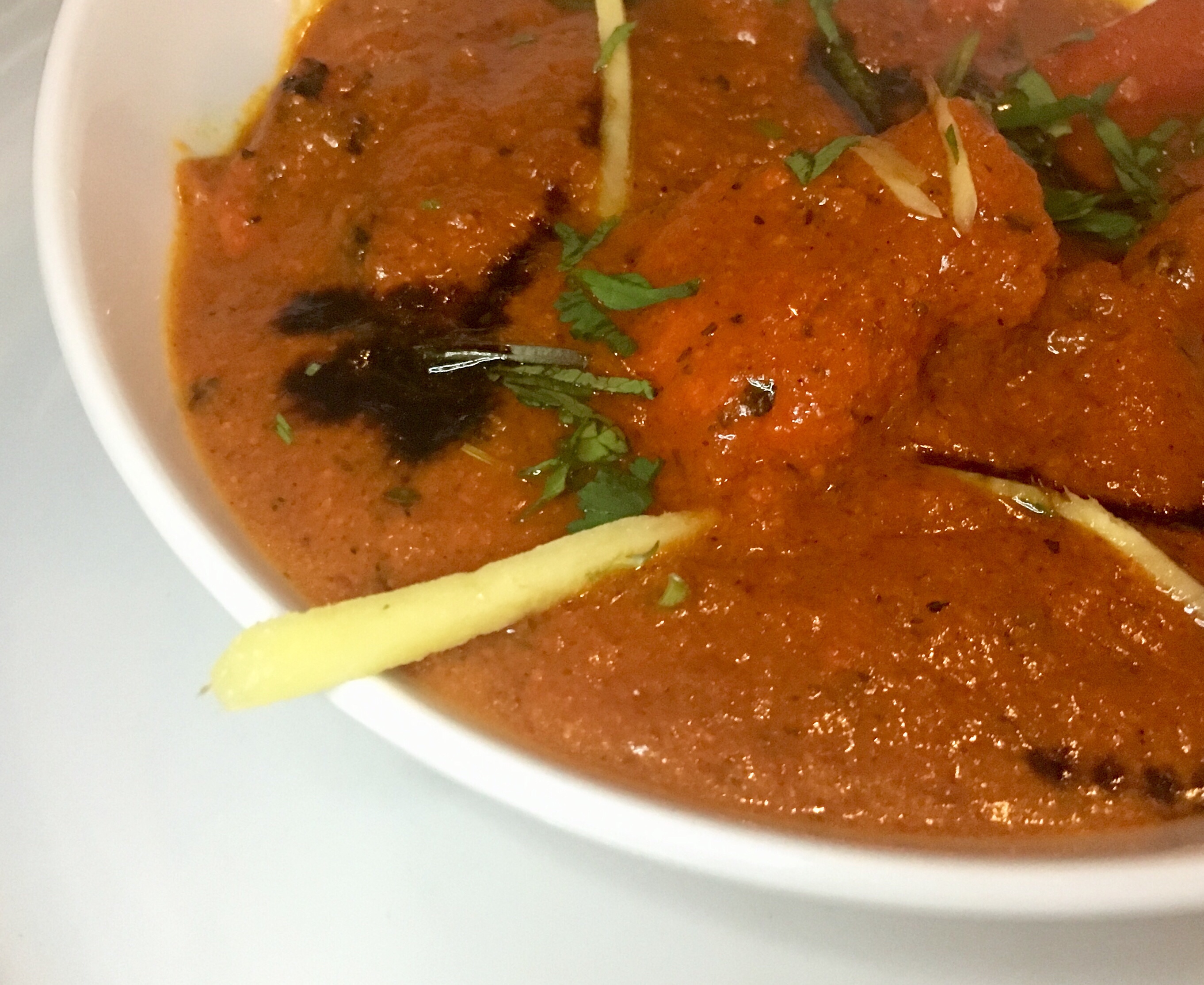 Finally we were delivered a dreamy Chateau Labaude Armagnac XO and dessert, with a choice of Mango Colada Slice or Gajar Halwa Cheesecake. I opted for the latter, with limited expectations as I’m not generally a huge fan of Indian desserts. My god I’m glad I picked this. Inspired by the street dessert carrot halwa, this rich pudding had a layer of carrot cake and a layer of soft cheese, before being topped with an almond cream cheese icing and crushed pistachios. The accompanying almond and bourbon ice cream could be available on the NHS instead of Prozac. 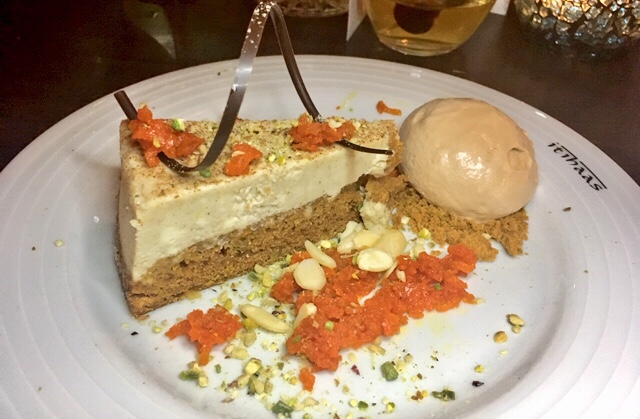 There are some seriously big flavours happening at Itihaas. The attention to detail in terms of the food, presentation and service is exemplary, with the venue offering a true fine dining experience. I liked this meal so much I booked a table and returned a week later. If you’re going to splash the cash on curry do it somewhere that gives you so much heart in return. Glorious.. although the same can’t be said for my soup soaked handbag, that had to be retired to the nearest bin.

Have you eaten here? What did you think? Let me know in the comments.

Disclosure: this was an event organised for food bloggers and my meal was complementary. I was asked to provide an honest review of my experience. Words, photos and opinions are all mine