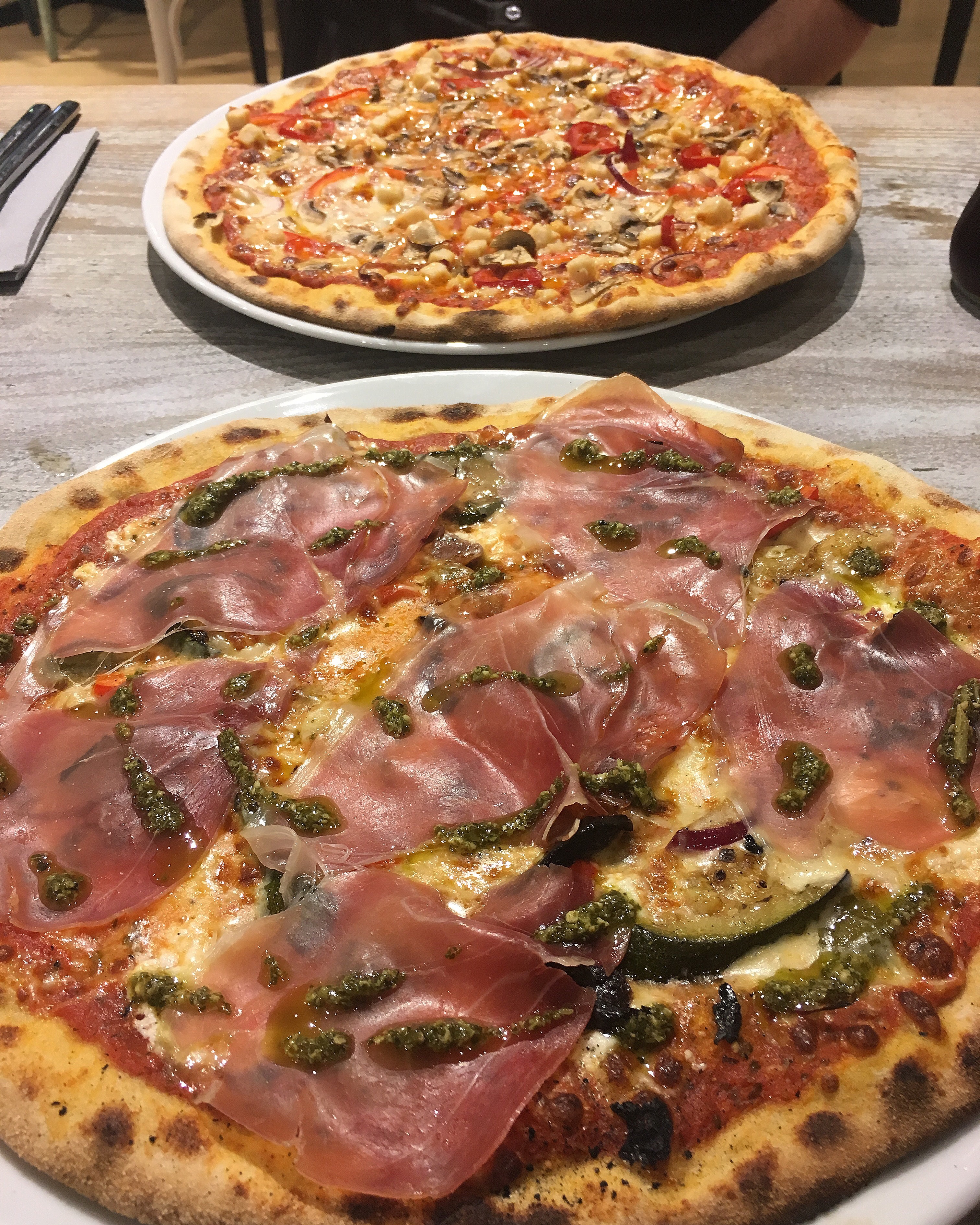 It’s fair to say my birthday weekend  *I turned 32 – sob* was raucous. It’s also fair to say I’ve probably eaten far too much this past week (my jeans no longer do up) and am now largely made of cheese and gin. You’d think that would mean a few days of reining it in, but instead I made one of the best decisions I’ve made in a week and took myself off to try the latest Selfridges addition: Izza Pizza.

Arriving on the Brum food scene about a month or so ago, Izza Pizza is part of the locally famous Lasan Group, who also own Indian fine dining restaurant Lasan (amazingfood) as well as Nosh and Quaff, amongst others. Found in the large Selfridges Food Hall site once occupied by Mugli Market – next to Ed’s Diner – Izza Pizza offers shoppers a wide selection of handcrafted sourdough pizzas as well as antipasti and salads.

The open plan restaurant itself is quite large, with tables available for all sizes of groups. I personally really liked the decor, with the muted tones making it feel like a modern European cafe, and I enjoyed being able to see the chef using the wood fired pizza oven. Yes, I’m nosy and like seeing the behind the scenes action.

At 6pm the restaurant was pretty quiet, but I imagine during the day when the Food Hall is heaving this place probably is too.

We were greeted by two lovely servers who couldn’t do enough for my dining partner and I from the moment we sat down. They both knew the menu inside out and told me lots about the story behind the restaurant’s inception. Their enthusiasm about the food and the place itself was truly delightful.

The menu itself offers appetisers and sides, alongside a great choice of pizzas; some classic and others more eclectic. I’m personally a fan of going simple or extreme when it comes to a slice of pizza, but shunned the margherita on this occasion to try one of the super-charged offerings suggested to me by our server.

Before the main event we decided to try some of the potato wedges with chive mayo (£2.95) and the marinara meatballs (£5.95) from the grazing menu. The beef and pork meatballs came in a rich marinara sauce and were served alongside two slices of warm focaccia. Whilst the sauce was delicious – and I later found out this is the same yummy sauce used as the base for most of the pizzas – it was slightly disappointing to hear the meatballs weren’t made in house – but they were tasty nonetheless.

After the appetisers our two 12 inch pizzas arrived and we were both amazed how large they looked. They were each generously topped and were piping hot from the wood fire. The sourdough crust was crispy on both, and the pizzas looked and smelt very inviting.

I chose the Fetish (£9.95) from the Izza Remix menu and added prosciutto (there are various additional toppings you can add for a small charge) and my partner opted for the Hot Clucker (£10.50) from the same part of the menu. Feta cheese, aubergine, red onions, courgettes, green olives and red bell peppers adorned the Fetish, which was given a fresh lift with a fragrant green pesto sauce drizzled over the feast.

I loved the salty tang of the feta mixed with the marinara sauce, and the various vegetables – which I think were in olive oil like antipasti – were delicious. Every bite tasted different and lots of textures and flavours made for an exciting dish.

My partner, known for being a mad carnivore, enjoyed the spicy chicken pizza he ordered, noting the crispy crust and generous amount of meat. Arguably it could’ve done with a little more cheese but that’s all subjective and it was still a very nice pizza.

A special shout out has to go to the royal surprise of the evening that was the pistachio ice cream (£3.95) which I was recommended to try – it’s an absolute revelation. Creamy, light, tasty.. if you go just do yourself a favour and order it – thank me later. I might go back tomorrow just to eat the green stuff to be honest.. The strawberry version was also creamy and dreamy, and I was led to believe other flavours were available.

I’m delighted I was invited to try Izza Pizza. The price point is worthy of the quality and service, and the food is generally very good. The pizzas are more exciting than the sides, but that’s not really why anyone would be visiting the place anyway, let’s be honest. The pizza portion, when compared to what you get for more money in The Stable, for example, is large and the toppings are plentiful.

There are lighter options such as Tuna Salad (£9.95) if you’re feeling more virtuous but you’d be doing yourself a disservice by not ordering a pizza here. I’ll definitely be back and would recommend Izza Pizza to anyone seeking a satisfying bite to eat in Selfridges or The Bull Ring.

All pizzas are made fresh to order so I’d consider that if you’re in a rush – imagine it’s probably mad busy at lunchtimes – but we enjoyed the food and dining experience very much.

*Disclosure: I was invited to review the Izza Pizza menu and therefore did not pay for the meal. All views are however still my own*