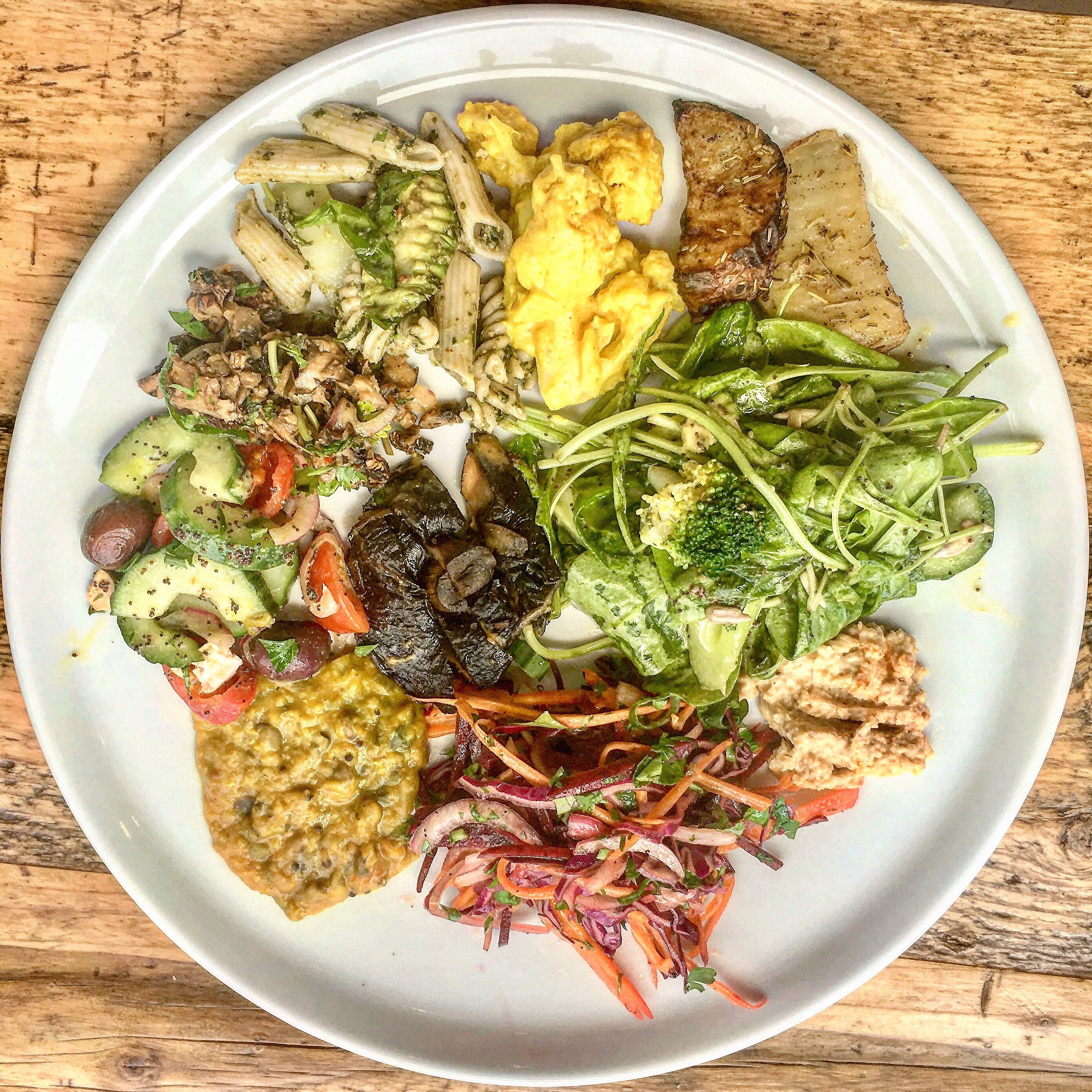 Recently I remembered some of my fellow foodies giving Natural Healthy Foods the big thumbs up so  I took myself off to sample this new vegan venue. It’s been on my ‘to try’ list for months, and despite popping in when it opened for a mooch I’d not yet tried the food. 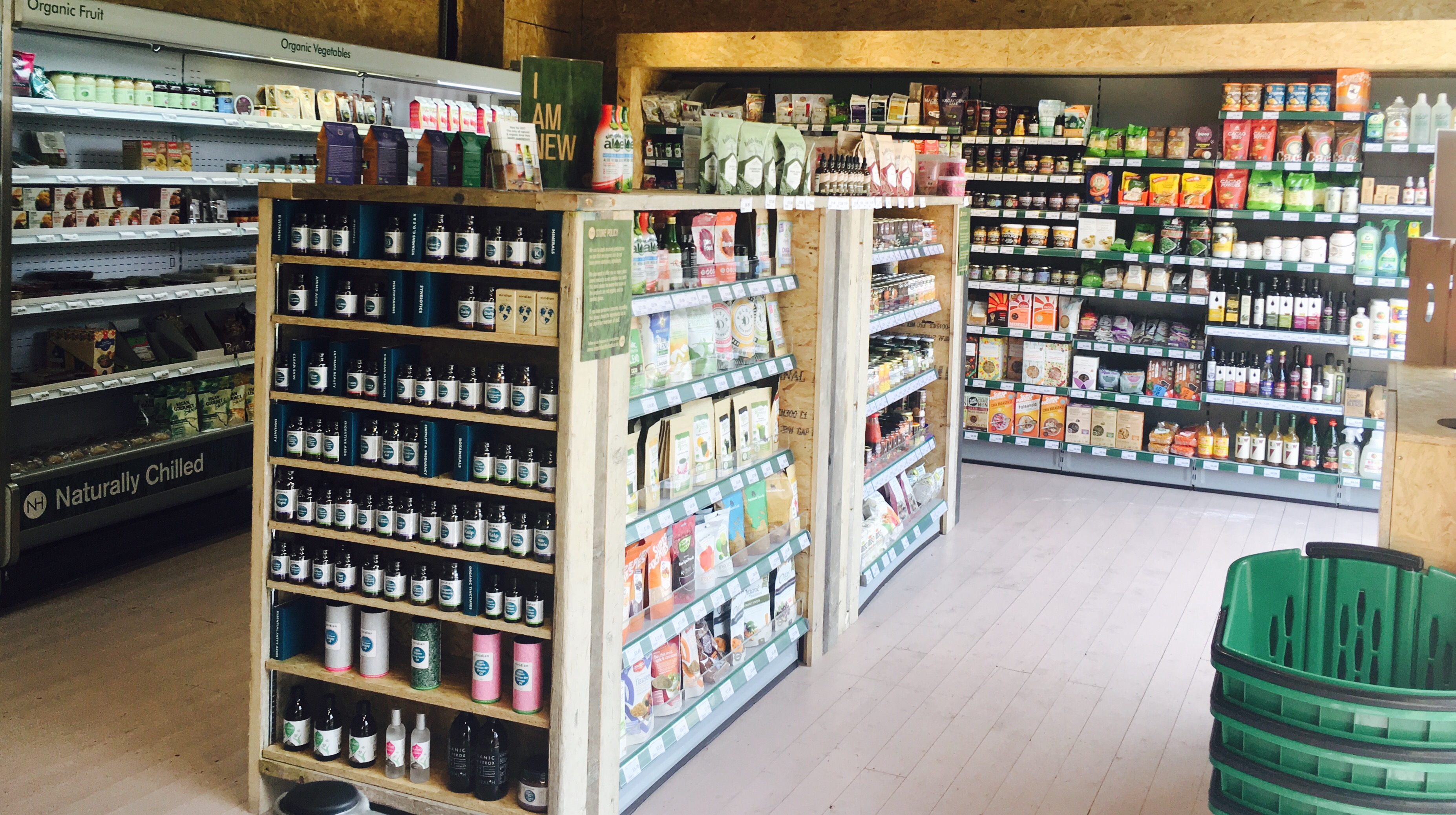 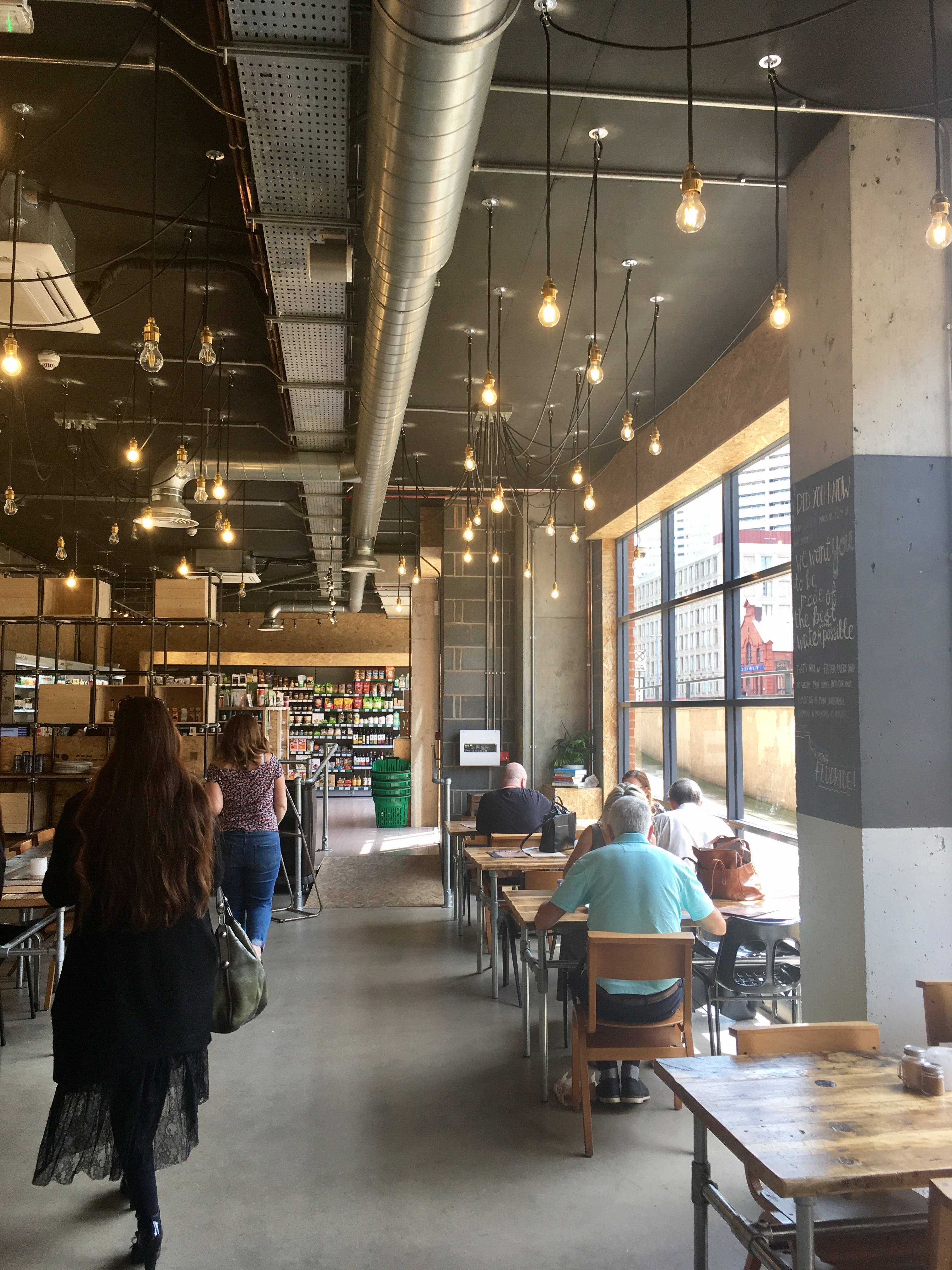 Entering through the shop, the first thing you notice about this branch of NHF (the original is in Digbeth) is the low key urban decor, including wooden tables and benches and exposed pipes. It’s a good space and feels airy, and the staff are immediately helpful and smiley.

Menus and a step by step guide to how the set up works hang from the walls above the food, which is presented buffet style. Served by weight, so you can choose as little or as much as your feel like, take away boxes are also available if you’re looking for a to-go vegan fix. There’s plenty of choice (it’s all organic and free of refined sugar) and handy little signs explain what tasty treats await. 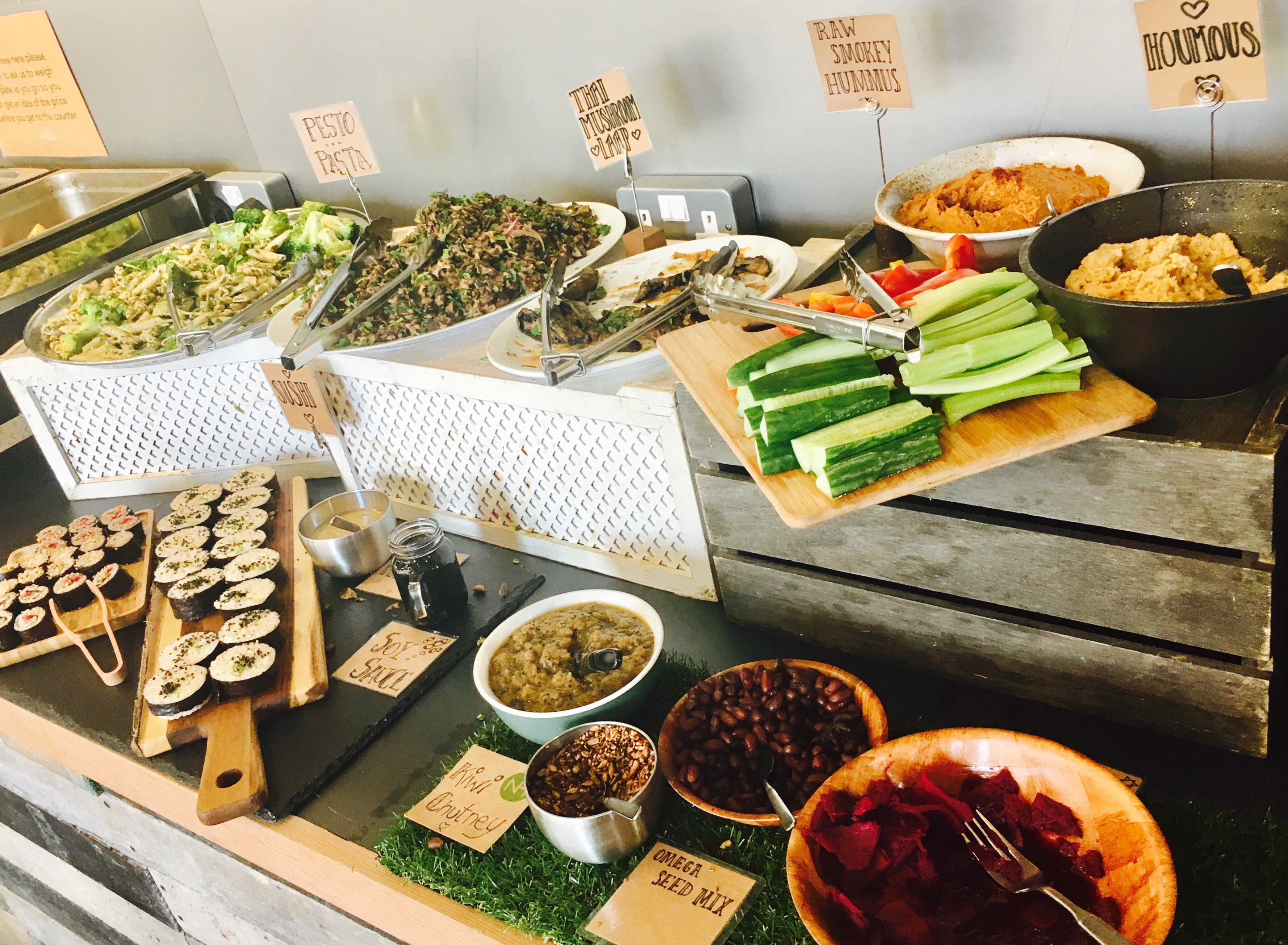 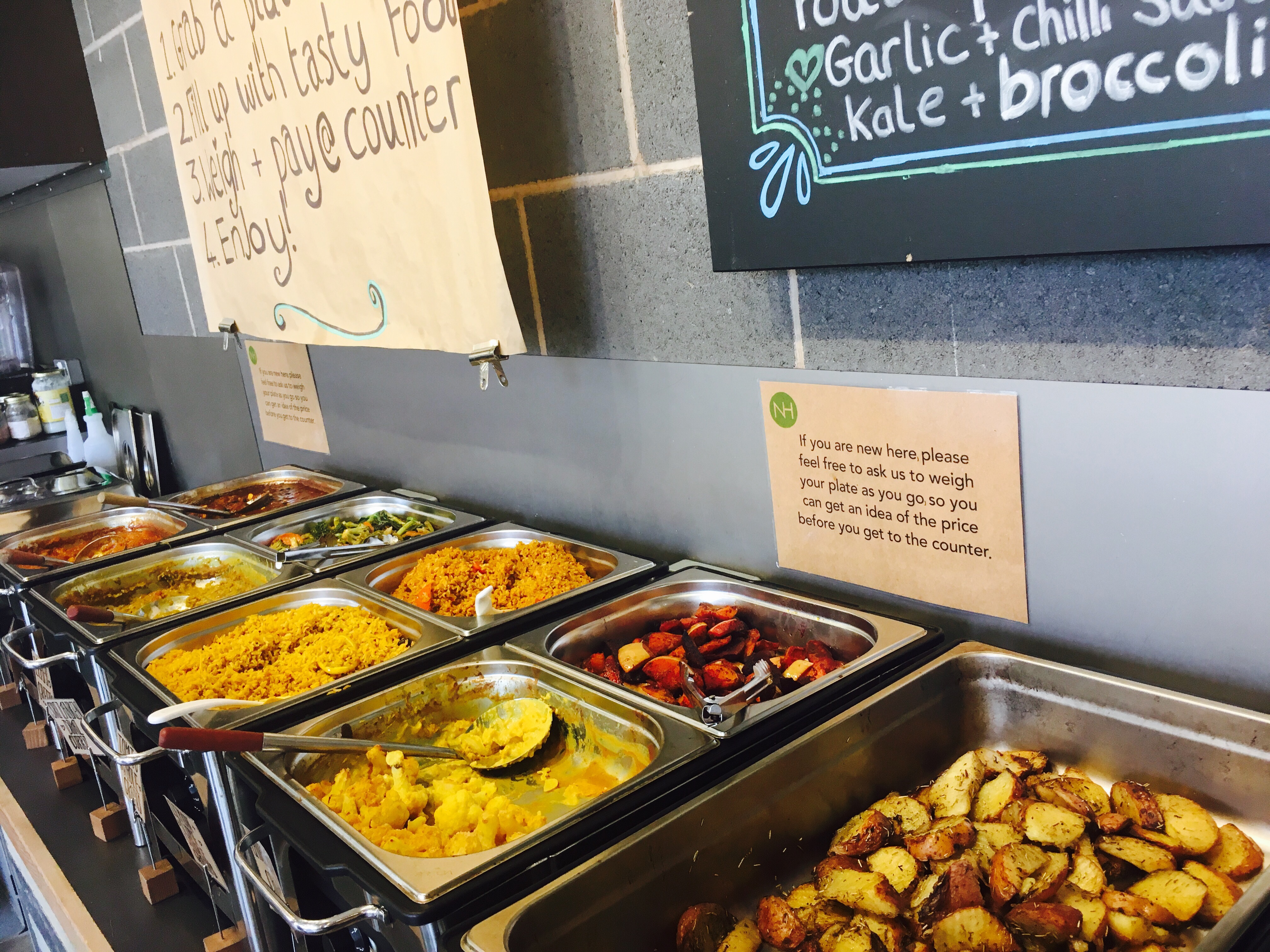 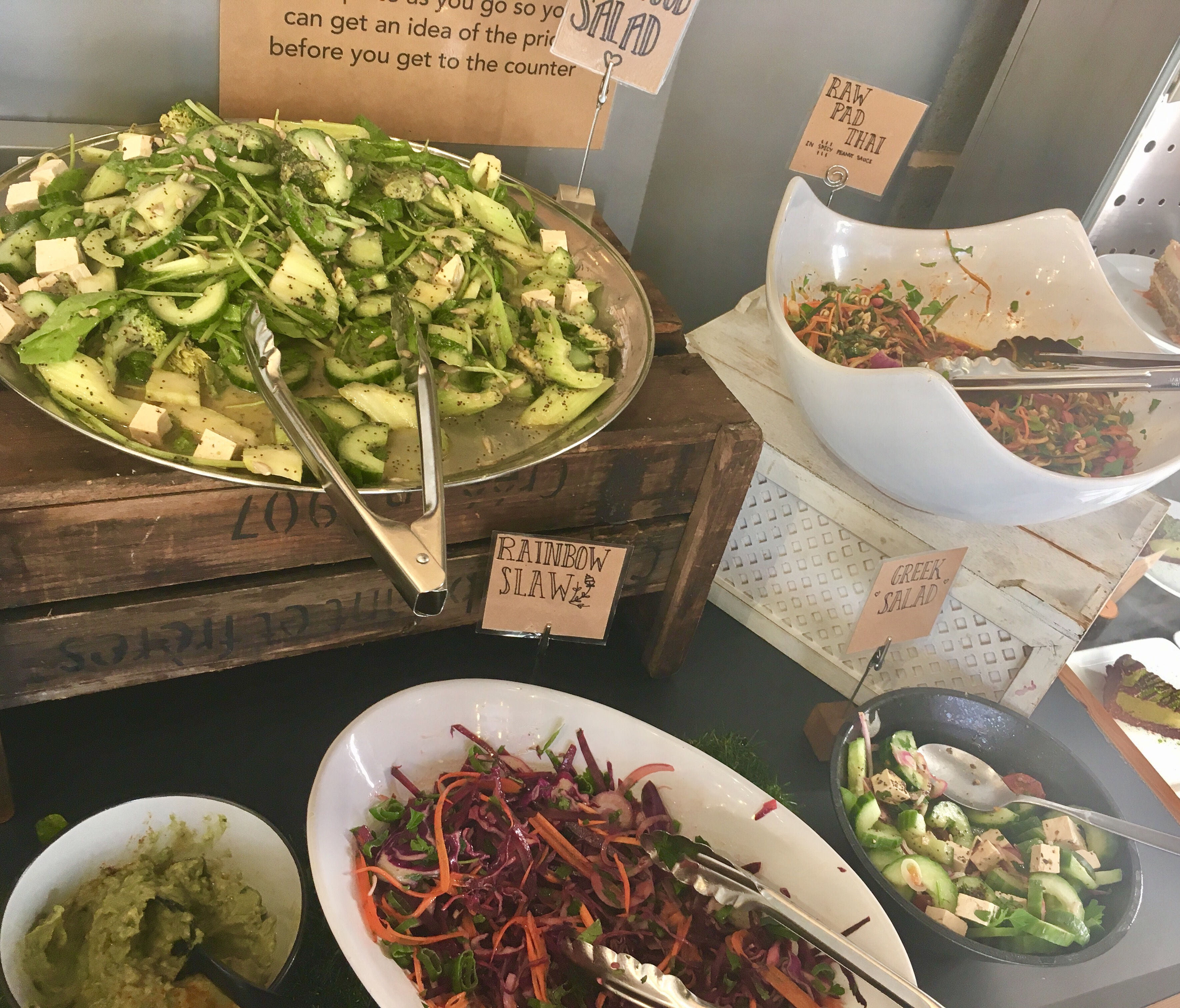 My first thought when having a browse of the dishes was how bright and colourful it all is; almost every shade of the rainbow can be found on the buffet table. Picking up a plate (these are weighed separately at the till so you only pay for the food) I started at the cold end, choosing to make myself a pick and mix style lunch. As I’m attempting a vaguely low carb diet where possible at the moment, I chose several raw dishes to try including the superfood salad (avocado, spinach, celery, cucumber) and the Vietnamese style slaw. Adding a blob of plain hummus, a spoonful of Thai mushroom salad and a tiny dollop of the pesto pasta, I moved on to the hot dishes. Whilst the rice looked delicious, I opted for the Sri Lankan dhal curry and a spoonful of the cauliflower ‘cheese’.

Taking my plate to the till I was sure it wouldn’t cost much as I’d chosen so many leafy greens, so I have to admit I was a bit taken aback when it came to nearly £12… BUT I have to say, the food was absolutely delicious. So much so that I scoffed the entire plate in next to no time – and wished I’d got more. 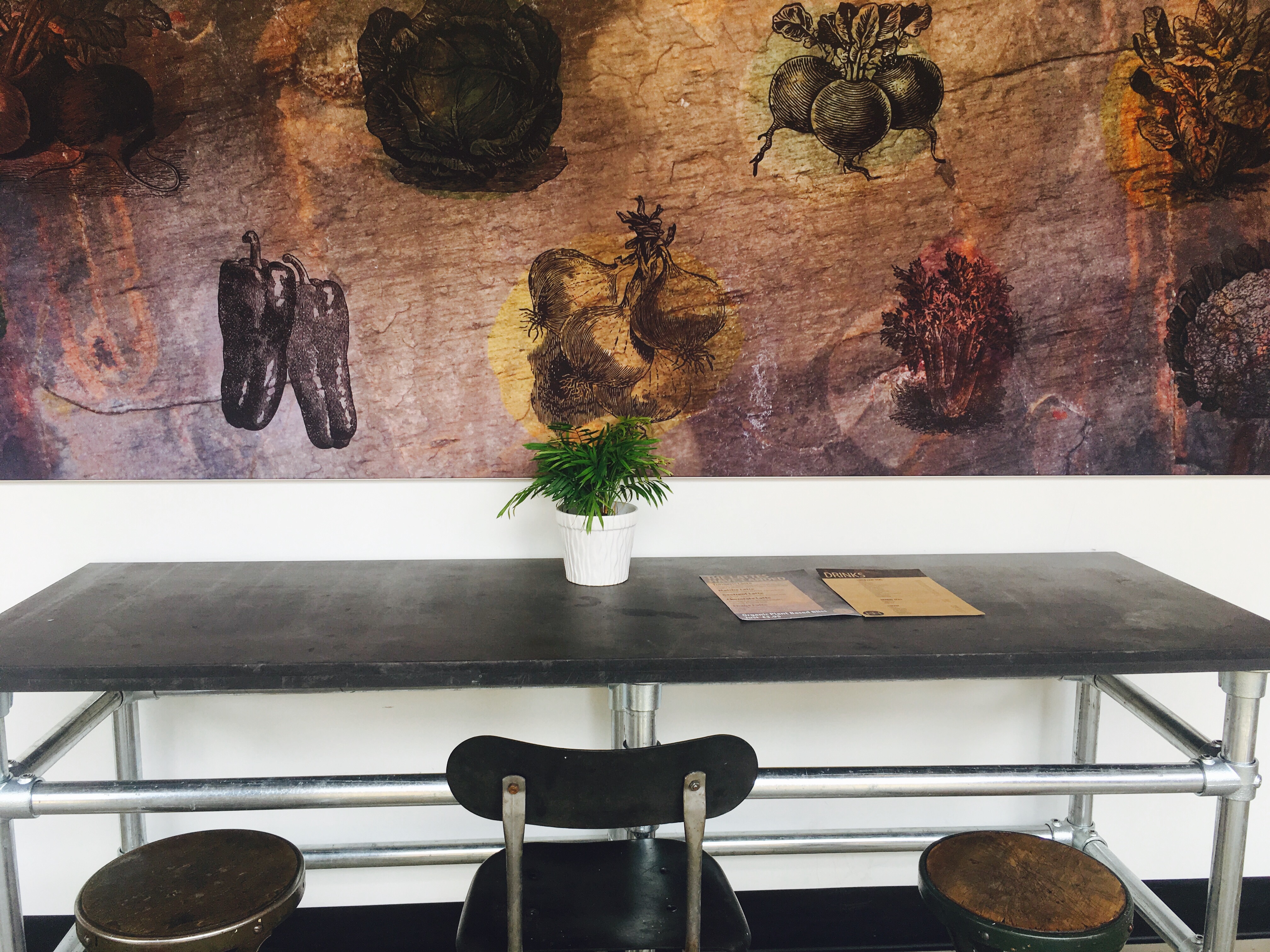 I grabbed a table by the window and got stuck in. As far as the cold selection goes, the mushroom salad was life changing (seriously, it’s insanely good) and had a beautiful texture and hum of heat. The slaw was fragrant and delicate which cut through the richness of some of the hot dishes. The superfood salad was ridiculously lovely and could be a perfect summer lunch on its own, to be honest. Everything tasted clean and fresh. 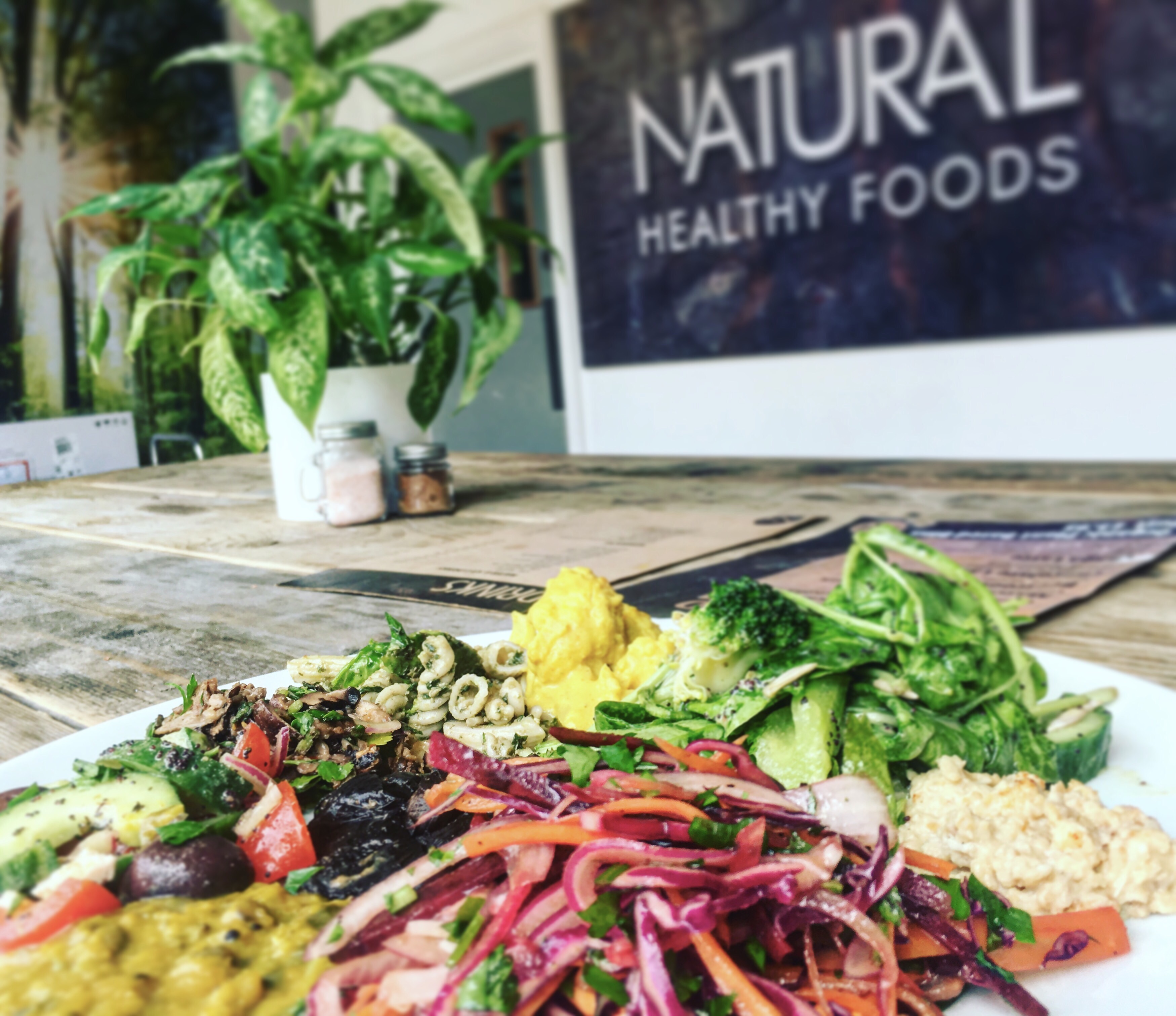 On to the hot food, the dhal was tasty and had several levels of flavour which I wasn’t expecting, and despite the cauliflower cheese having an oddly vivid yellow tinge, that was also delicious. My only criticism would be for the rosemary roasted potato wedges which, whilst flavoursome, where a little greasy which made them soggy once on the plate. I only had two to be fair, and they did taste nice once I’d removed the excess oil with a napkin. 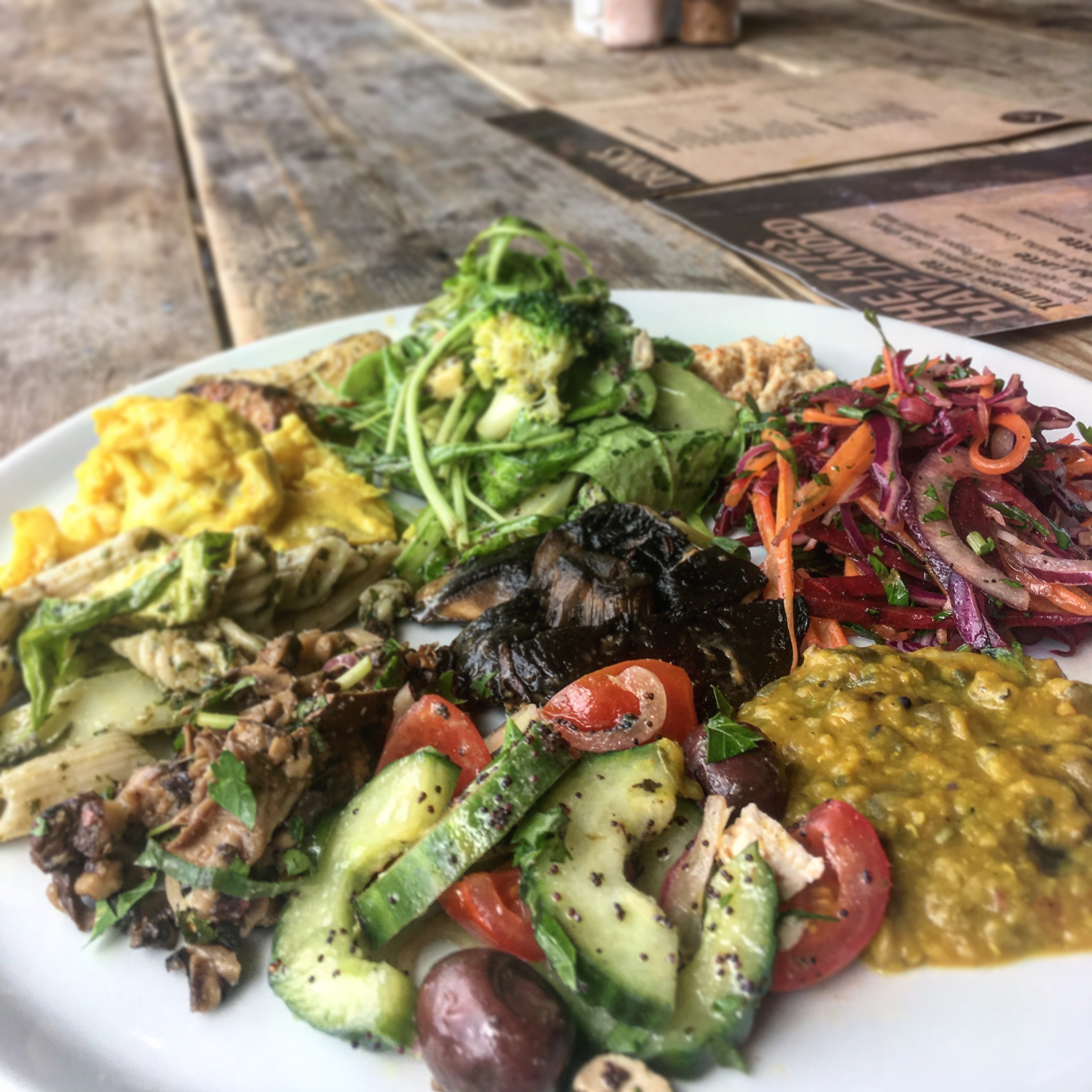 Other food options included vegan sushi, various carnations of rice, and spicy roasted root vegetables. I didn’t sample the desserts or drinks on this occasion (I grabbed a glass of water from the complimentary jugs provided next to the plat station) but they looked absolutely fantastic. The lemon cheesecake especially looked rather pretty with the poppy seeds running through it, and the fresh juices looked inviting.

It’s not just about the food though, with those working at NHF believing strongly in the vegan ethos. They’re knowledgable without being pushy about veganism generally and seem genuinely delighted when they hear positive feedback, which is delightfully humble considering how much people rave about this place. I’ll definitely be back, probably very soon, and will be spreading the love to meat-eaters and veg lovers alike.

Have you eaten at Natural Healthy Foods? What did you think? Let me know in the comments.

Disclaimer: This post is not affiliated with any brand/company mentioned within. All views are my own*

Come for the pictures of food, stay for the hangovers, crisp consumption and shit memes.

He doesn’t fucking deserve you.
Find you a better bloke on here anyway. Twitter what you saying ?
Table of two on me @PINIONbistro for valentines if we find you a decent date. You into in ? X https://twitter.com/cunning_stunt73/status/1221813170324541441

@GaryUsher_Chef @WreckfishBistro @PINIONbistro Was gonna finally come to @PINIONbistro for Valentine’s Day..... but my fella dumped me last week. Maybe next time 🤷🏻‍♂️💔

Lying down is just brilliant, isn’t it?