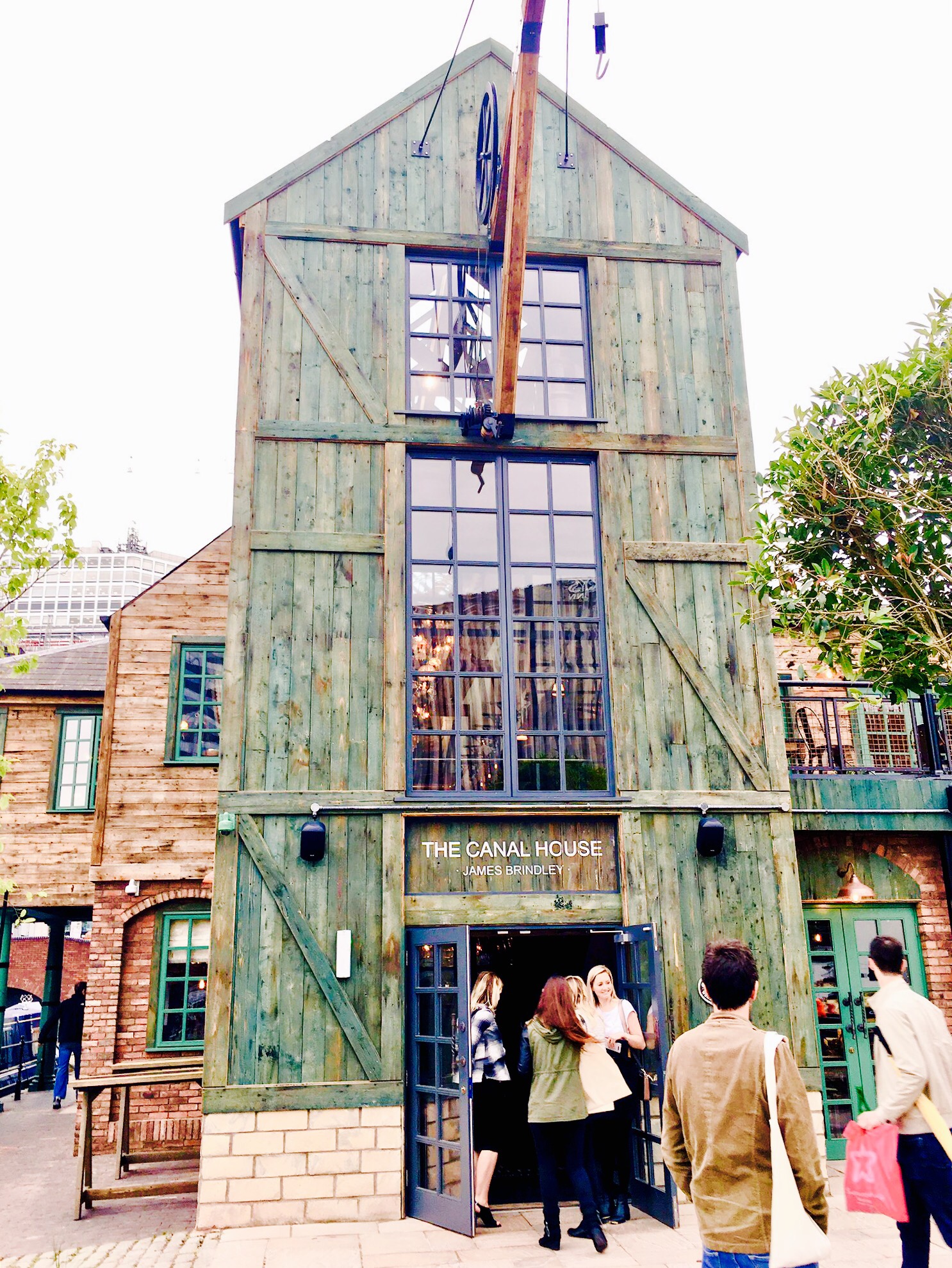 Last week saw the official launch of The Canal House on Bridge Street, and to celebrate a party was held to mark the occasion.

Over recent months the former James Brindley pub has been transformed in to The Canal House; a sizeable city centre bar and restaurant overlooking Gas Street Basin. New World Trading Company – the same folk behind The Botanist – is behind the restoration and regeneration projection, which marks a new brand addition for the company.

Having been vacant for almost a decade, and after a stunning cosmetic makeover, this new addition to the food and drink scene had been hotly anticipated. I’d walked past the venue a few times since the start of summer, having a nose to see what the The Canal House may look like, but until now all remained rather illusive. However, having now explored the venue I can tell you one thing above anything else: it’s been worth the wait.

Having received an invitation to join some of my fellow bloggers at the swish launch party, I was quite excited to discover the evening started with beer tasting and a jaunt on a narrow boat; I could hear my canal-loving dad seething with jealousy from Stourport. As we set off on our cruise along the Birmingham canal we were welcomed by a beer expert for a mini ale master class and proceeded to sample a selection of unique world ales available back at the pub.

Despite the lame weather – seriously where is summer?! – it was a lovely start to the evening before we headed back to sample some food and drinks.

There’s no denying that The Canal House is beautiful, inside and out. Arriving via the canal meant we got to take in its glory from various angles, and it cannot be understated how big this place is. Split over two floors with various nooks and crannies to explore, the venue is spacious, bright and offers various seating options. Much of the decor, such as the neautral colour scheme and colourful chandeliers, is very familiar (if you’ve been to The Botanist you will recognise several features) and there is rustic wood as far as the eye can see.

As well as a large bar – with another upstairs – you’ll also find the venue has its own rotisserie, and whilst it’s modern and pretty there’s lots of local nods to the building’s heritage and history. Every time I walked around I found something new to look at and take photos of, and I’m pretty sure if you use that Pinteresty thing you’ll love this place.

For the second part of the evening we were seated and invited to sample the drinks and food available. Again, you’ll find some recognisable munch – unsurprisingly given the owners – however there’s lots of new choices. Our brilliant server, Tiana, talked us through her recommendations and suggested we start with nibbles; she’s a wise lady. We ordered Olives (£3.25) and Pork Crackling (£3.95) from the Nibbles section, as well as our starters of Prawn and Chorizo (£6.95) and Rotisserie Duck Rillette (£5.95).

The skewered prawns and sausage were delicious, especially when drizzled in the mint yoghurt; this was actually one of my highlights of the feasting. The prawns were sweet and juicy, and the deep red chorizo was bursting with smoky flavour. The duck dish, similar to a creamy pate, lacked the flavour punch I’d expected but it was still enjoyable and the texture combined with the thin, crunchy slices of granary toast was delightful. Also, it might not be sophisticated, but that pork crackling with chilli is just heavenly.

Onto mains and (after much deliberation) we ordered the Salt & Pepper Pork Belly Hanging Kebab (£12.75) and the Chicken Hanging Kebab (£11.75) which both came with seasoned chips. Did I mention they both come with melted garlic butter poured in front of you at the table? OH YES – and it’s all bloody delicious. Tender meat that melted in the mouth, a decent portion and lots of drippy, buttery joy; really satisfying and visually impressive mains. We also ordered to sides (because sometimes you need some lettuce with your butter) and opted for Josiah’s Greens (£2.75) consisting of tender stem broccoli, peas, sliced radish, mint and chunks of goats cheese, and Henshall’s Salad (£2.75); a fresh mix of feta, red and white quinoa and a coriander and lime dressing. Both were tasty and helped cut through the richness of the kebabs.

Because we’re animals we also managed to fit in dessert. A Sticky Toffee Pudding (£6.95) for me and Baked Cookie Dough (£6.95) for Ian. The STP sponge was light and the sauce thick and rich – as it all should be – but the showstopper is the cookie dough. I think I heard 10 people speak animatedly about this beauty; with good reason. Firstly the warm dough is absolutely wonderful and secondly you get lots of it. We also, on Tiana’s advice, tried the Grilled Pinapple (£5.75) which came with coconut ice cream, but it got a bit lost in the excitement of the cookie dough so barely got a look in I’m afraid.

We were also treated to drinks, including ales and beers (of which they have over 60 including one sold only in this venue) and cocktails. We tried a variety hic including Liz’s Fizz (£8.25) which is a bit like a Mojito without the sugar overkill, and Old Ruby (£9.95), a small but strong gin cocktail made with rhubarb. That was my favourite of the evening without a doubt. Others tried included Wormhill Whisky Sour (£8.95), Searching For Something New (£7.25), Duke’s Bramble (£7.50), No Oridinary Labourer (£8.25), Aged After Death (£9.95), and finally The Lady Killer (£7.50). Seriously, send me to rehab….

I love this place; I’m going to tell anyone who will listen how much I love it. The staff were all clued up, accommodating and friendly, and their enthusiasm and training about the venue’s history was wonderful. It’s a delight to see this building being enjoyed again.. I’m sorry I can’t come up with a more sophisticated, clever conclusion but just go and enjoy it.

Have you tried the food at The Canal House yet? Let me know in the comments.

Disclosure: The Canal House opened officially on August 14th. I was invited as a guest and all food and drink noted above was complementary. I wasn’t obliged to write anything but I had such a lovely time I wanted to share the joy

4 thoughts on “Cocktails and food @ The Canal House”