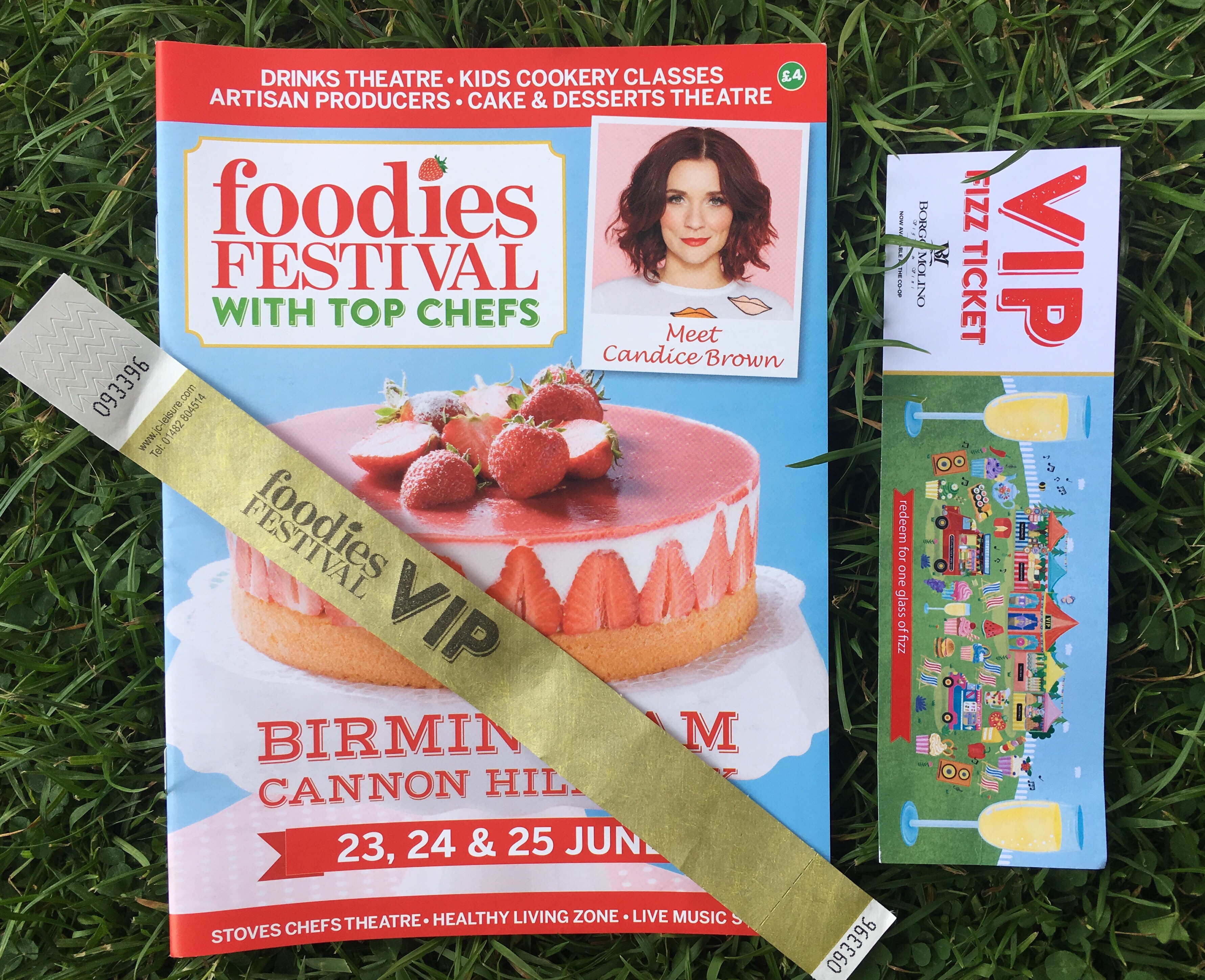 Last weekend saw the return of Foodies Festival, and despite the bipolar weather (I managed to get sunburnt in the rain, a new one even for me) the three-day event in Cannon Hill Park proved to be a success. Seeing local food and drink businesses merge with those from further afield, the festival was designed with the sole purpose of bringing foodies together; united in bacon and beer.

I was lucky enough to win VIP tickets to the last day of the festival via a Twitter competition (thanks again BrumHour) and so spent my Sunday surrounded by fantastic food to try, as well as live demos to watch. Nestled in the centre of the park, the festival was larger than I anticipated, and from the moment we walked through the entrance a host of stalls awaited us – not to mention the wafts of 100 different kinds of food.

After receiving our sassy gold wrist bands we made our way to the VIP tent for a chilled glass of pink fizz and some live acoustic music. The heavens opened  about thirty seconds later and I have to say I’ve never been happier to have a roof over me, although once the rain cleared and the sun broke through we finally got stuck in to exploring the festival.

There was an insane amount of choice whether you wanted to snack or feast, and the street food area was rammed with tiny pop ups ready to feed you. Just some of the themes included BBQ, Chinese, Thai, Caribbean, Argentinian, Turkish, Indian, Korean, Mexican, French and, of course, ruck loads of burgers.

Members of our group tried various dishes throughout the day including BBQ pork belly, burritos, slow cooked smoky ribs, jerk chicken, and (as George testified) a bloody good bacon cheese burger. Judging by all of the noises people were making I’d say it’s a given the food all went down rather well.

As well as the ready-to-go food, a plethora of stalls were selling fare from local (and not so local) producers, including everything from pickled onion cheese to Champagne infused fudge. There were also enough slabs of cake at this festival to build Trump’s wall and still have some spare to have with a cuppa later. Bosh.

The outdoor venue was littered with quirky spots to grab refreshments, whether that be fizz, craft ale or a cocktail. From the giant teapot serving summer favourite Pimms, to a pirate ship serving up classic mojitos, the drinks were most certainly flowing. I particularly enjoyed the Silent Pool stand which provided me with a delicious botanical flavoured gin and tonic at the start of my adventures. I wish I’d bought a big bottle of this now in hindsight, but apparently it’s available in Waitrose *nail emoji*

Later on we also enjoyed (far too many of) the King Star lagers in the Manor Beer Tent as we soaked up some of the eclectic tunes playing. I also liked the toffee vodka cocktail I unwittingly had in place of lunch but I’m pretty sure that’s why I was quite tipsy (hammered) when we left at 6pm.

The festival had a great atmosphere and having spent the night before seething about missing out on Glasto it filled a fest-shaped hole in my heart. There were numerous activities during the day as well as the (constant) feasting, including live cooking and baking demos from local chefs as well as GBBO winner Candice Brown. We also came across yoga classes, giant board games and various stages and tents playing live music, making it a real family affair.

The highlight for me was watching my other half enter – and narrowly miss out on first place in – a chilli eating competition. The rowdy tent (we were all quite leathered; there was a lot of booze at Foodies Festival!!!!) had a great atmosphere as 10 willing contestants tried their luck at eating increasingly hotter chillies. Lots of cheering and squealing (and crying) later a victor was crowned and St John’s ambulance breathed a sigh of relief as we all trundled out of the park.

*Note: we later found out this drunken chilli escapade made two local newspapers and my other half is now being called ‘Birmingham’s answer to Liam Gallagher’… no, I’m not kidding*

Disclaimer: I won 4 VIP tickets to Foodies Festival and so did not pay to enter the event, however all food and drink consumed (bar a glass of prosecco) was paid for in full. All opinions, photos and oversharing belong to me.

My last Twitter request of this nature went superbly so here I am again! Does anyone know any #Birmingham party planning/decorating business who would be interested in providing decorations for a fundraising event for @Bham_Childrens in March? 🎈🎉🥳

Showered, dressed and at my laptop with breakfast by 8am. Today is either going to a WFH masterpiece or I’ll have launched myself into the canal by noon.

me doing dry Jan vs. me the rest of the year