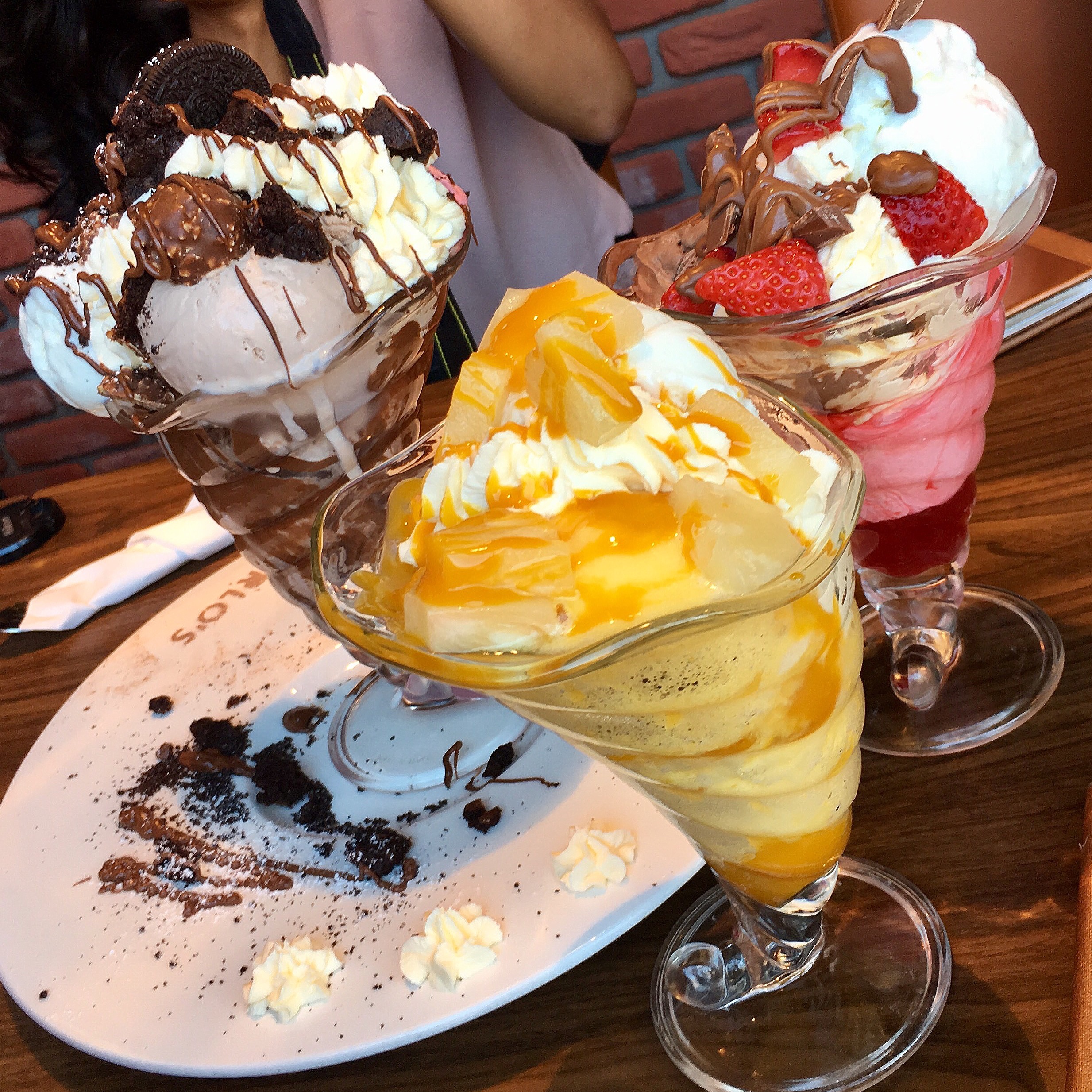 This week saw pudding master Pirlos Dessert Lounge celebrate its first birthday, and I was lucky enough to be invited by the kind folk at Delicious PR to the blogger birthday bash at the popular Digbeth restaurant.

This unique establishment is designed to seriously indulge sugar fiends and has an extensive menu of sweet treats and naughty puds to please even the most obsessive of dessert fans. The lounge offers all sorts to indulge in, including cakes and muffins, waffles and crepes, gelato, epic cookie dough sundaes, and cheesecakes – it even has some gluten free and dairy free additions to the menu.

Amazingly, there are also vegan choices available! Literally, the menu is huge.

Usually classing myself as more of a savoury food fan, I was excited to try out the various sugar-hits Pirlos had to offer to see if I could be swayed to the land of the sweet, as well as meet the team behind the popular eatery.

As part of the party, bloggers and guests were invited to try some of the top sellers from the menu. To start we were given selection of ice cream sundaes, including the Pirlos Mega Sundae (£7.95) which was packed full of Ferrero Rocher, strawberry and Oreo ice creams and bite size chunks of brownie. I had to stop myself eating the whole thing as I knew I needed to save room.

The mango sorbet in the Tropical Fruit Twist Sundae (£5.95) was also tasty and cleansing after the chocolate fix before. We were also given some fruity cocktails before the main event kicked off.

Keen to showcase all they have to offer, the Pirlos team brought over a selection of plates to delve into, including some cake, brownies, crepes and waffles.

A big fan of waffles, I immediately let my spoon do the walking and attacked the mountain of waffle, ice cream, banana and strawberries which adorned the Big Waffle (£8.95). I really enjoyed the combination of crispy waffle and warm, rich Nutella sauce, and I thought out of all the deserts it looked the most decadent.

Having already decided that the waffle was probably going to be unbeatable, I wasn’t expecting to enjoy the Choc O Holic (chocolate and M&M stuffed crêpes) as much as I did, but they were my highlight of the evening for me. Light but chewy, the crêpes were absolutely delicious and had lots of decadent flavours and textures going on.

There was also a fruity crêpe version of the pancake style dessert involving lots of berries and strawberry gelato which many of the other bloggers were raving about. Both crêpes are on the menu for £6.95 but you can also create your own for £7.95 – yay for bespoke filth!

Another hot addition to the menu was the super rich chocolate Milk Chocolate Fondue (£12.95) which is designed for two to share. Bite size chunks of squishy chocolate brownie, strawberries, banana and pineapple are available to dip into the sauce, which can then be dipped again into chopped nuts. This was a great idea for a dish, but the tinned pineapple was a tiny bit disappointing – especially next to the other fresh, ripe fruits.

For cake fans there was a slice of Red Velvet (£5.96) to feast on, and whilst the portion was undeniably massive and the sponge was moist it was lacking a little in the flavour department for me. Maybe I had been spoilt with the richer tastes of the previous desserts, of course!

Finally we were each given a personal trio of desserts to sample, including a slice of waffle with chocolate drizzle, a mini stuffed crêpe and a square of Oreo cheesecake. Again the crêpe was the winner for me, and despite being full I finished that little sweet parcel.

I left feeling quite buzzed from all the naughty nibbles and would certainly recommend visiting this place if you want a sugar high, it’s also just 5 minutes walk from the Bull Ring. I loved the taster items we got to try and think I may be back sooner rather than later for more crêpes.

I imagine Pirlos relies on word of mouth rather than foot traffic due to its location, but that’s how you build up a loyal customer base and it seems to be doing very well thanks to such a novel idea. Having been to a party at Hennessy’s Bar (across the road from Pirlos) I was familiar with the location which – and I still believe this – is a slightly odd spot for this place.

The restaurant itself looks and is lovely inside, but the area to the immediate left and right side makes it look like it’s been sort of dropped randomly from sugar heaven.

I imagine they rely on word of mouth rather than foot traffic too, but that’s how you build up a loyal customer base and I’m sure they’re doing very well with such a novel idea.

Epic treats and enough choice to make your head spin. If I was a Brummy kid with a big birthday coming up I know where I’d want my party…

Are you a fan of Pirlos Dessert Lounge? Let me know in the comments.

Disclosure: I was invited to this evening by the fab folk at Delicious PR as part of a blogger event, therefore the food/drink was complimentary. However views and opinions in this review are all mine

The sun is shining and I’ve got bangers and mash for tea later. It’s going to be a great day.

My dad helps to run a small local theatre - this news for the cultural, arts and heritage institutions is incredibly important to people like him. Some much needed positivity for a lot of people tonight ♥️👏🏼